Arkansas covid hospitalizations go up by 18, push total to highest in over a week 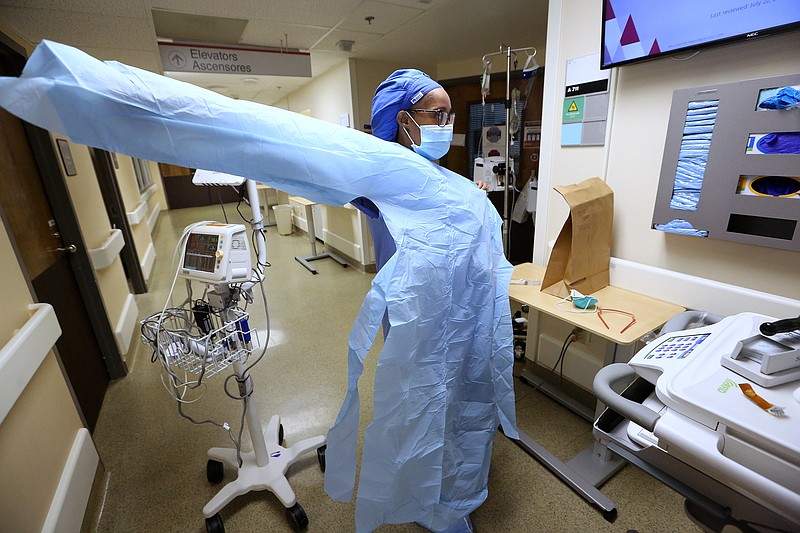 The number of people hospitalized with covid-19 in Arkansas rose by double-digits on Friday, reaching its highest level in just over a week, amid signs that the spread of the virus in the state was once again accelerating.

Health Department spokeswoman Danyelle McNeill said seven of the deaths reported Friday happened within the past month, and the other was from earlier in July.

Growing for the third day in a row, the number of covid-19 patients in the state's hospitals rose by 18, to 325, its highest level since Aug. 18.

While smaller by 11 than the rise on Thursday, it was larger by 215 than the one the previous Friday.

It was the largest daily increase on a Friday since July 22.

After dipping slightly a day earlier, the average daily increase in the state's case count over a rolling seven-day period rose to 922, its highest level since the week ending Aug. 9.

Rising for the fourth straight day, the number of cases in the state that were considered active grew by 260, to 11,103, as new cases outpaced recoveries.

Until this week, the active case total hadn't risen for more than two days in a row since it hit a peak of 16,946 on July 20.

After rising by eight a day earlier, the number of the state's virus patients who were in intensive care fell Friday by four, to 67.

The number on ventilators, which fell by five on Thursday, remained Friday at 13.

State Epidemiologist Mike Cima has linked a recent uptick in Arkansas' new case numbers to the start of the 2022-23 school year.

Infections among children, who make up about 23% of Arkansas' population, accounted for 27% of the state's new cases on Wednesday, 33% of those on Thursday and 29% of those on Friday, according to information from the Health Department's online coronavirus dashboard.

Cima said this week that new cases had been rising among children but were still falling among other age groups from the peak they reached last month.

Based on what happened at the start of the last school year, he said he expected the uptick to be short-lived and limited to young people.

He said he didn't expect the rise in new infections to lead to a significant increase in hospitalizations or other severe outcomes.

Meanwhile, McNeill said Friday that Arkansas has been notified that it can "pre-order" up to 77,600 doses of the updated Pfizer and Moderna vaccines that federal health officials hope will be available as booster shots starting early next month.

Both companies this week applied to the U.S. Food and Drug Administration for emergency authorization of the revamped vaccines, which target the original coronavirus strain as well as two strains of the omicron variant that are now responsible for most infections.

Pfizer's boosters would be available to people 12 and older, while Moderna's would be limited to those 18 and older.

Arkansas was allotted 28,200 doses of the Pfizer boosters and 5,200 doses of Moderna's for the first "wave" of pre-orders, McNeill said.

She said the Health Department is gathering information from health care providers about how many doses they want and has not yet submitted any pre-orders.

Outside of the state vaccination program, additional doses are expected to be shipped to veterans hospitals and other federal entities and to stores participating in the Federal Retail Pharmacy Program for COVID-19 Vaccination.

Through the retail pharmacy program, 49 Arkansas stores belonging to the Community Pharmacy Enhanced Services Network requested 9,900 doses of Pfizer and 1,600 doses of Moderna during the first wave of pre-orders, which ended Tuesday, John Vinson, chief executive of the Arkansas Pharmacists Association, said.

He said pharmacies were each allowed to pre-order up to 300 doses of Pfizer or 100 doses of Moderna.

During the second wave of pre-orders, which started Wednesday and runs through Monday, network pharmacies can request up to 300 doses of Pfizer.

No Moderna doses were available for the second wave, Vinson said.

"We've exhausted the initial [Moderna] supply on the first wave, and so we'll have to wait until they get more allocation from the CDC to pick up on Moderna," Kyle Lomax, owner of the Southern Pharmacy drugstore chain in northeast Arkansas and the network's state chairman, said.

Vinson said the supply the first week the new boosters become available likely won't be large enough to provide one to everyone who wants one.

"I don't think it will be as intense as what it was two years ago" during the initial vaccine rollout, he said, "but I do think there's a lot of people who have been anticipating and expecting and looking forward to a booster that covers omicron."

As of last week, the federal government had purchased a total of 175 million doses of the updated boosters, according to a planning document posted to the U.S. Centers for Disease Control and Prevention's website.

The CDC said it expected shipments to begin "immediately" after the vaccines are authorized by the FDA, although the vaccinations would not start until the CDC issues recommendations on the vaccines' use.

A committee that advises the CDC on such recommendations is scheduled to meet on Thursday and Friday of next week.

The CDC said in the planning document that the updated vaccines are expected to be available as a single booster for people who have completed their primary vaccine series, including people who have already had one or more boosters tailored to the original coronavirus strain.

The original versions of the Pfizer and Moderna vaccines would still be used for initial two-dose regimen for people who have not yet been vaccinated.

Print Headline: Virus cases in hospitals go up by 18