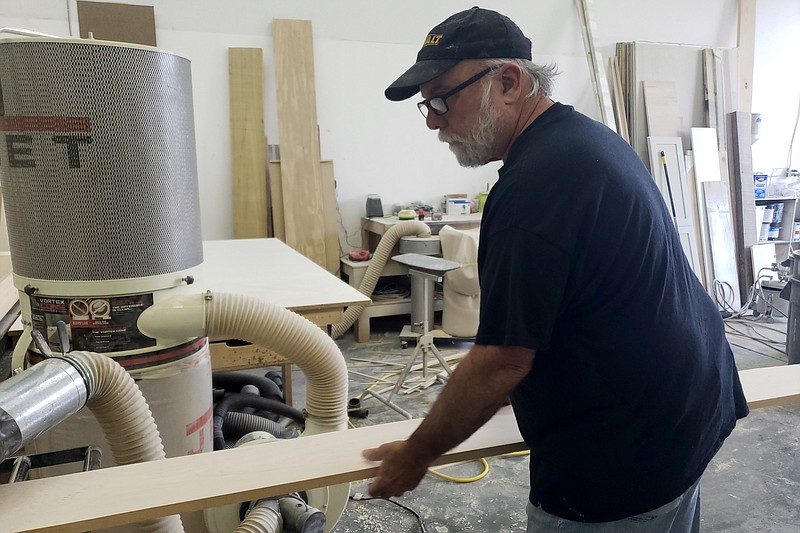 This photo provided by shows Bill Albritton of Bill Albritton Cabinetry in his workshop in Charlotte, N.C., on Aug. 24, 2022. Albritton is booked out 30 days in advance, compared to the usual 90 to 160 days. Meanwhile, his costs have gone up by more than 30% across the board. Plywood he uses jumped from $72 to $140 a sheet around Christmas. It has gone back down to $85 a sheet, but that’s still higher than it used to be. And he has trouble finding hinges at any price. (Rick Chastain/Courtesy of Bill Albritton via AP)

NEW YORK -- The chill in the housing market is rippling out to the carpenters, landscapers and other small businesses that lose out when fewer homeowners are renovating their properties.

Inflation was already causing some homeowners to delay big renovation projects as prices for building materials, fixtures and appliances jumped. More recently, higher mortgage rates have put a damper on the number of homes being sold.

At the beginning of the year, carpenter Bill Albritton, who has owned Albritton Custom Carpentry near Charlotte, N.C., since 2004, was booked months in advance and completing full custom kitchen cabinet replacements in homes in the historic districts of Charlotte. But he's seen a slowdown over the past two months.

In the Charlotte metropolitan area, the number of homes sold fell 19% between June and July, and home sales are down about 21% from July a year ago, according to the Re/Max monthly National Housing Report.

Albritton is booked out 30 days in advance, compared to the usual 90 to 160 days. Meanwhile, his costs have gone up by more than 30% across the board. Plywood he uses jumped from $72 to $140 a sheet around Christmas. It has gone back down to $85 a sheet, but that's still higher than it used to be. And he has trouble finding hinges at any price.

Albritton is trying to pivot to smaller carpentry jobs.

"Instead of doing new kitchens we're gearing up to do what we call 'kitchen face-lifts,'" Albritton said. That means just replacing the fronts of cabinets and drawers and teaming up with a painting contractor to paint the cabinets. It gives "a new kitchen look for a fraction of the price," he said.

The Federal Reserve has been raising interest rates in an effort to reduce inflation, which is running at almost 10% annually at the wholesale level. The fear is that the Fed will go too far and the economy will go into a slump.

"I am very worried, on the heels of the material shortages we have been battling, to now look at a very possible recession," Albritton said. He's reaching out to other home renovation companies to partner with as one way to keep the work coming.

The average rate on a 30-year mortgage is 5.55%, according to Freddie Mac. A year ago, the average was 2.87%. Freddie Mac, the federally chartered mortgage investor, aggregates rates from around 80 lenders across the country to come up with weekly national averages. The survey is based on home purchase mortgages. Rates for refinances may be different. The aggregation uses rates for high-quality borrowers, those having strong credit scores and making large down payments. Because of the criteria, these rates are not available to all borrowers.

"Mortgage rates tend to rise when economic data signals that the economy is strengthening," said Holden Lewis, a home and mortgage expert at NerdWallet. "This week was the exception, as rates rose even without unambiguously positive economic news."

The increase is forcing some would-be buyers out of the market, and sales of previously owned homes have fallen for six straight months. That matters to the businesses involved in home renovations because sellers can spend thousands of dollars making a house more attractive to buyers, and then the buyers spend thousands more personalizing their new home or fixing it up.

Bankrate.com, which puts out a weekly mortgage rate trend index, found that nearly three-quarters of the experts surveyed expect rates to go up this week.

"Treasury and [mortgage-backed-security] markets took a severe beating in the past week," said Dick Lepre, a loan agent at CrossCountry Mortgage. "Mortgage rates are all about inflation. Investors have lost what confidence they had that inflation could be controlled. A 75-basis point hike is assured for September 21. We appear to be at the start of a worldwide recession."

Growth in homeowner spending for improvements and repairs is expected to slow for the rest of 2022 and the first half of 2023, according to the Remodeling Futures Program at the Joint Center for Housing Studies of Harvard University. The center's Leading Indicator of Remodeling Activity predicts homeowner improvement and repair spending will grow 17.4% this year to $431 billion. That will slow to 10.1% by the second quarter of next year, with total 2023 spending estimated at $446 billion.

New-home sales last month sank to their lowest level in 13 years, down 13% month-over-month and 30% year-over-year. Existing-home sales fell for the sixth consecutive month, down 6% monthly and 20% annually. Pending home sales slipped 1% in July.

Chris Doyle, CEO and co-founder of Billd, a construction finance company, said small businesses should be aware of what's going on in their market and consider pivoting to different types of projects. A small business previously focused on new-home construction should try to work with renovators instead, for example. And since residential home spending is set to decline, federal construction projects might also be something to look into.

"Everyone's going to have to adapt," he said. "Small businesses have an opportunity to adapt quicker since they're more nimble than bigger companies."

Daniel Edwards, who owns a Handyman Connection franchise in Hanover, Massachusetts, focuses on small jobs that are several thousand dollars, like building decks, swapping out windows and doors and carpentry projects. In the greater Boston area that includes Hanover, home sales in July were down 20%. The median price of a home sold was $650,000, down 2% from June but up 8% from this time last year, according to Re/Max data.

Edwards said he's normally booked out three or four weeks with jobs, but lately it's been two to three weeks. He says customers are being tighter with money: They want smaller jobs, want to look at receipts and question the price of materials. For example, one customer decided to install a toilet paper holder himself, rather than paying someone to do it, saving about $25, he said. Another customer who requested a quote for a gutter cleaning decided to hold off. But while business has been slower, he says the dip isn't as bad as he was worried it might be.

"I certainly don't see normal July and August levels, but I don't see what I had feared in terms of significant decline. People still want small- to mid-sized projects," he said.

More price-sensitive customers have cut back. One customer who was planning on putting in a new lawn decided to wait until next year, and others have cut back from biweekly landscaping appointments to monthly.

Curbio is a startup that provides pre-sale renovations on homes that it doesn't charge for until the home is sold. In the 52 markets Curbio operates in across the country, from Chicago to South Florida, it has also started offering smaller projects as the housing market slows.

"As the market starts to cool in some areas, there's much more sensitivity to timelines," said Olivia Mariani, vice president at Curbio. "Before, a homeowner may be willing to wait 8 to 12 weeks to fully gut and remodel their kitchen. Now, they're asking for the minimum viable work."

So instead of doing a full renovation, Curbio has begun shifting project types to more "refreshes" -- like painting cabinets or refinishing hardwood floors. It dropped its prior $15,000 minimum price for projects, and now 30% of its projects are under $15,000.

Mariani said Curbio's data shows that a cabinet refresh can help raise the price of a home for sale just as much as a bigger job.

"Buyers just want a home that doesn't require maintenance -- a full cabinet redo is not really necessary," she said.

Information for this article was contributed by Mae Anderson of The Associated Press and by Kathy Orton of The Washington Post. 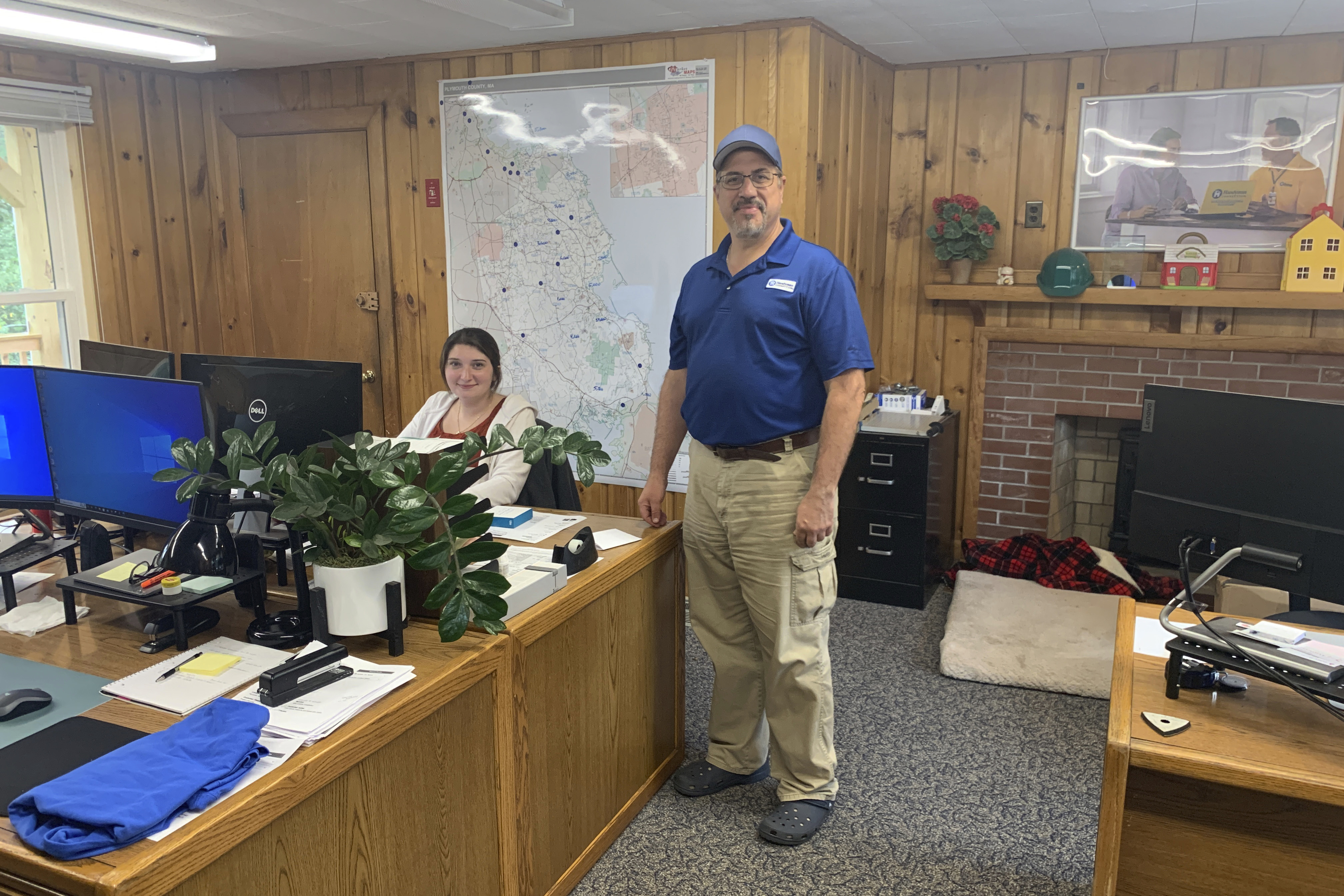 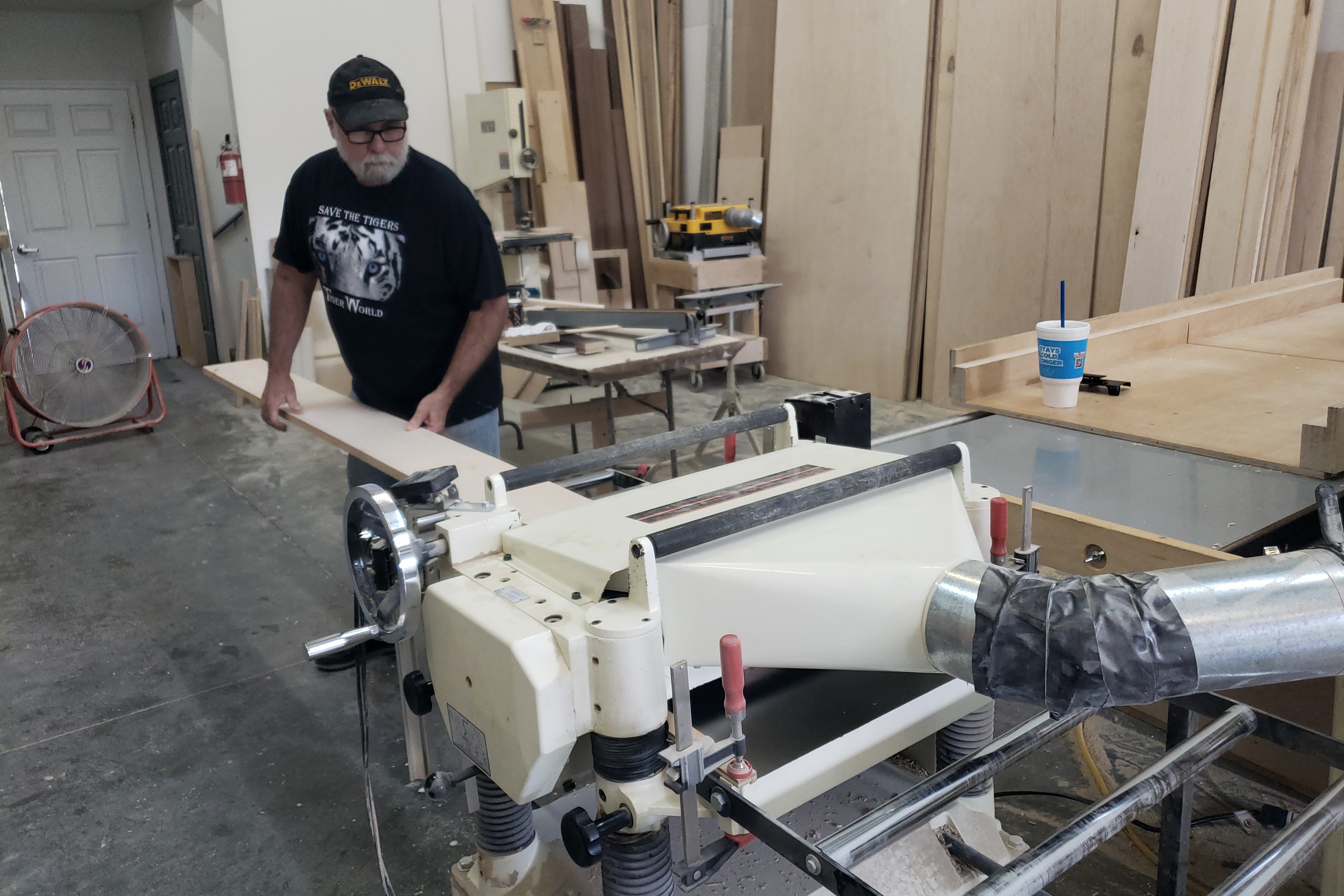 Bill Albritton of Bill Albritton Cabinetry in his workshop in Charlotte, N.C., on Aug. 24, 2022. Albritton is booked out 30 days in advance, compared to the usual 90 to 160 days. Meanwhile, his costs have gone up by more than 30% across the board. Plywood he uses jumped from $72 to $140 a sheet around Christmas. It has gone back down to $85 a sheet, but that’s still higher than it used to be. And he has trouble finding hinges at any price. (Rick Chastain/Courtesy of Bill Albritton via AP)