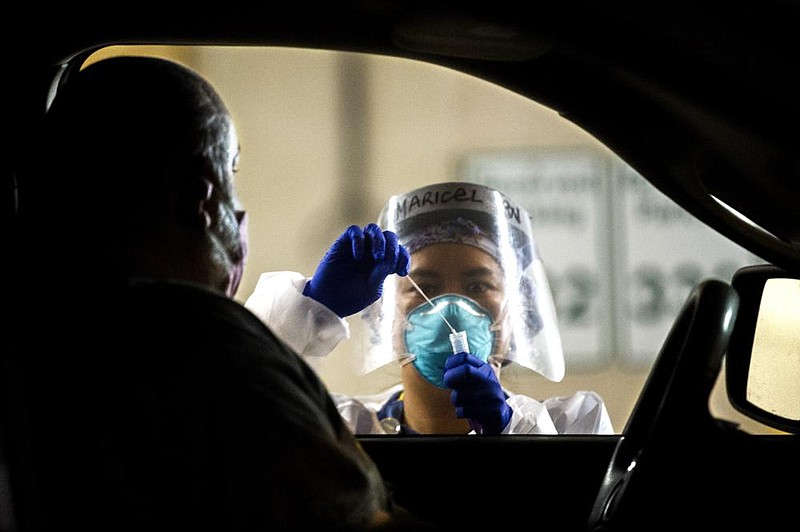 Continuing a recent uptick health officials have linked to the start of the 2022-23 school year, Arkansas' count of coronavirus cases rose Tuesday by 1,383 -- the largest daily increase on a Tuesday in more than a month.

After rising by 10 a day earlier, however, the number of people hospitalized in the state with covid-19 fell by six, to 318.

The state's death toll from the virus, as tracked by the Department of Health, rose by five, to 11,910.

The increase in cases on Tuesday was almost three times the size of the one on Monday and up by 246 compared with the one the previous Tuesday.

It was the largest daily increase since Aug. 4 and the biggest on a Tuesday since July 26.

With new cases outnumbering recoveries, the number of cases in the state that were considered active rose Tuesday by 394, to 11,232, after falling the previous two days.

"As we've seen over the last few weeks, the increase in active cases is driven by school-age children (18 and under)," Health Department Director Jennifer Dillaha said in an emailed statement.

"Last summer, we also saw a bump in cases in that age group after the start of school, but the bump was short lived. If the same thing happens this year, hopefully we will not see an increase in cases for much longer."

Infections in the 18 and under age group, who represent about 24% of the state's population, made up almost 30% of the state's active cases as of Tuesday, up from 20% a week earlier.

Despite the decline on Monday, the number of covid-19 patients in the state's hospitals as of Tuesday was still up by 15 compared with a week earlier.

"Hospitalizations have been relatively flat recently, with ups and downs in the day-to-day numbers," Dillaha said.

"This could be related to school-age children spreading infections to more vulnerable adults. We will need to analyze the data further and see if this trend continues in order to know for sure."

At its hospitals in Little Rock and Springdale, Arkansas Children's had 19 covid-19 patients on Tuesday, up from 13 on Monday and 15 the previous Tuesday, spokeswoman Amanda Leech said.

Growing for the fifth day in a row, the average daily increase in the state's case count over a rolling seven-day period rose to 973, up from an average of 868 a day the previous week.

It was the highest average over a seven-day span since the week ending Aug. 7.

Declining for the second day in a row, the number of the state's virus patients who were in intensive care fell Tuesday by five, to 51.

The number on ventilators, which rose by two a day earlier, fell by three, to 12, the smallest number since July 11.

Print Headline: Covid case count up by 1,383 in state