First Black minority leader to serve with Clark, Aguilar by Compiled by Democrat-Gazette staff from wire reports | December 1, 2022 at 5:09 a.m. 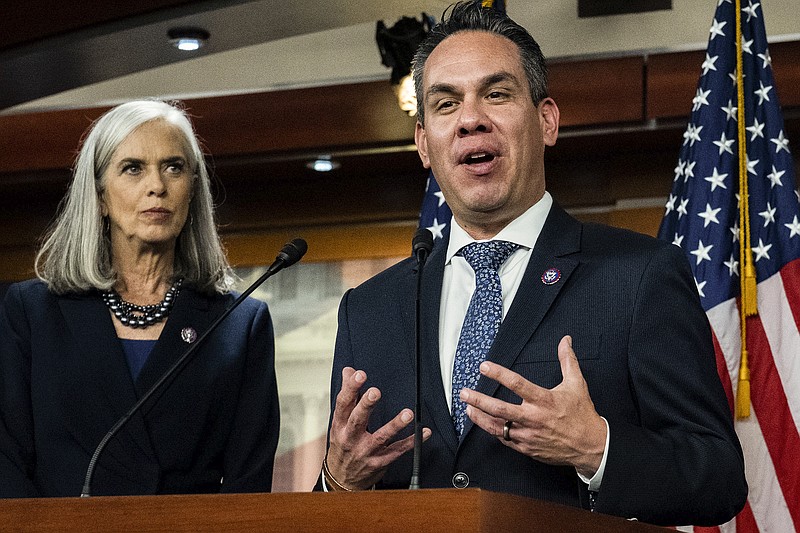 Rep. Katherine Clark and Rep. Pete Aguilar discuss their new roles in House Democratic leadership after their election Wednesday. According to two people in the room when they were chosen, lawmakers chanted “We want Petey Pie!” as they nominated Aguilar, borrowing a nickname his grandmother gave him. (The New York Times/Haiyun Jiang)

WASHINGTON -- House Democrats on Wednesday elected a new generation of leaders to take the mantle from the three octogenarians who have led them for two decades, installing a trio of top leaders that, for the first time in congressional history, includes no white men.

In a display of unity after midterm elections in which they lost the House but had a stronger than expected showing, Democrats skipped a vote and by acclamation elected Rep. Hakeem Jeffries of New York to be minority leader, making him the first Black person to claim the top spot. Rep. Katherine Clark of Massachusetts was elected as whip, the lead vote counter for House Democrats, and Rep. Pete Aguilar of California as the chairman of the party caucus, in charge of messaging.

Jeffries, 52, Clark, 59, and Aguilar, 43, who for years have positioned themselves as an unofficial joint slate and patiently waited their turn, ran unopposed after Speaker Nancy Pelosi, the California Democrat who has led the party for two decades, announced after the midterm elections that she would step aside, paving the way for fresher faces at the top of her party. Colleagues late Tuesday granted her the honorific title of "speaker emerita."

Rep. Steny Hoyer of Maryland, the majority leader, had considered trying to remain in leadership and said he had the support to do so, but ultimately decided against it. And Rep. Adam Schiff, D-Calif., had considered a challenge to Jeffries for the post of minority leader, but many Democrats said he lacked the votes. Last week, Schiff told Jeffries that he was instead exploring a run for Senate, and wished him well in the coming leadership election, according to a person familiar with the private conversation who disclosed it on the condition of anonymity.

The mood was jubilant on Wednesday inside the ornate committee hearing room across from the Capitol where Democrats met to elect their new leaders.

"We want Petey Pie!" lawmakers chanted as they nominated Aguilar, using a nickname his grandmother gave him, according to two people in the room.

"If you don't know," Sewell shouted out. "Now you know," the members called back.

Afterward, Jeffries nodded to the historic nature of his election, saying, "I stand on the shoulders of Shirley Chisholm and others," a reference to the former representative from his district who in 1968 became the first Black woman to be elected to Congress.

Democrats, for the most part, said they saw the lack of competitive races as a sign of strength and unity, and a stark contrast to the fractured Republican conference, in which Rep. Kevin McCarthy, the minority leader, is struggling to win the support he needs to become speaker amid a revolt on his right flank. A historically weak midterm performance has handed the GOP a razor-thin House majority for the next Congress, making the job of leading it exceedingly difficult.

"It shows that Democrats are in array, Republicans are in disarray," said Rep. Ted Lieu, D-Calif., noting that the new slate of leaders, which includes a Black man, a white woman and a Latino man, "reflects the beautiful diversity of America." Lieu, later Wednesday, won election to be the vice chair of the Democratic caucus, putting him in line to become the first Asian American to hold that post.

The House's two new potential leaders are of the same generation but have almost no real relationship to speak of -- in fact, the Democrat is known for leveling political barbs at the Republican from afar, particularly over the GOP's embrace of former President Donald Trump. Jeffries served as a House manager during Trump's first impeachment.

Rep. Ilhan Omar of Minnesota said she was excited to have a leader "who actually does represent the diversity of our caucus."

"It's an important moment for the caucus -- that there's a new generation of leadership," said Rep. Chris Pappas, D-N.H., ahead of voting.

Democratic Rep. Cori Bush of Missouri called the leadership election "historic" and a "time for change."

Clark, elected for the No. 2 spot, extended the invitation to Republicans to work with Democrats on bipartisan projects.

"Our door is open for any member from across the aisle who wants to get to work for the American people," she said.

Aguilar, in a news conference after the top three jobs were cemented, said that the election showed that "while Kevin McCarthy is auctioning off real estate and square footage for every vote he can, we're united together." Jeffries said House Democrats were united because they shared a commitment to fighting for "young people, seniors, immigrants, veterans, the poor, the sick, the afflicted, the least, the lost and the left behind."

He said Democrats would "push back against extremism whenever necessary."

Yet some Democrats called the uncontested election a missed opportunity for them to discuss how their party was shifting and how it should move forward.

"This is the most significant generational change that we have seen in House Democrats in several decades," said Rep. Alexandria Ocasio-Cortez of New York. "I personally believe that we would benefit from a debate on what that means."

Jeffries has sometimes been met with skepticism from party progressives, viewed as a more centrist figure among House Democrats.

But Rep. Rashida Tlaib, D-Mich., a progressive and part of the "squad" of liberal lawmakers, said she has been heartened by the way Jeffries and his team are reaching out, even though they face no challengers.

"There's a genuine sense that he wants to develop relationships and working partnerships with many of us," she said.

The leadership elections marked a sea change for the caucus, which for two decades has been led by the same trio of leaders, who effectively froze out dozens of more junior lawmakers who had been waiting to ascend.

Pelosi's announcement before Thanksgiving that she would step down from leadership set the long-awaited change in motion. Hoyer quickly followed suit, and Rep. James Clyburn of South Carolina, the whip, said he would relinquish the third-ranking spot and seek a lower position.

His decision to stay in leadership, however, rankled some members.

On Wednesday, Rep. David Cicilline of Rhode Island, who is gay, said he planned to challenge Clyburn for the position of assistant leader.

"With so much at stake, I think it is critical that the House Democratic leadership team fully reflect the diversity of our caucus and the American people by including an LGBTQ+ member at the leadership table," he said in a letter to his colleagues announcing his bid. That race will be decided today.

In remarks to reporters ahead of the election, Jeffries described the role he was about to assume as a "solemn responsibility."

"When we get an opportunity as diverse leaders to serve in positions of consequence, the most meaningful thing that we can do in that space is do an incredibly good job," Jeffries said.

He downplayed the divisions among Democrats and expressed confidence in his ability, along with his expected leadership team, to keep the party united in the coming year.

"There's nothing more unifying than being in the minority and having a clear-eyed objective and goal of getting back into the majority so we can continue to deliver big things for everyday Americans," he said.

Sen. Chuck Schumer, the majority leader, said he has known Jeffries, a neighbor in the Brooklyn borough of New York City as they live a mile apart from each other, for years and expected to speak with him the same amount he now talks with Pelosi: about four or five times a day.

"It's a little like Pelosi," Schumer said in an interview. "When I first met her, I said, 'This person is special; she's going somewhere.' I felt the same way about Hakeem."

Schumer said Jeffries "always had the leg up" in the race to succeed Pelosi.

"He's very good at reaching out to people of many ideologies," Schumer said, predicting Jeffries would be able to reach across party lines.

"There are going to be a group, in my judgment, of mainstream Republicans who are not going to want to go in the MAGA direction, and Hakeem's the ideal type guy to work with them," Schumer said, referencing Trump's "Make America Great Again" slogan.

Civil rights leader the Rev. Al Sharpton called Jeffries' elevation a "long overdue moment in America," noting that "another barrier to equal representation has come down."

Pelosi and Hoyer plan to remain in office, an unusual but not unprecedented arrangement that Jeffries called a "blessing" in that the new leaders can seek their counsel.

While the House Democrats are a big, diverse and often "noisy" group, Jeffries said it's a good thing, and representative of the House as "the institution closest to the people."

"At the end of the day, we always come together, find the highest common denominator and get the things done everyday Americans," he said.

Information for this article was contributed by Annie Karni and Emily Cochrane of The New York Times and by Farnoush Amiri, Michelle L. Price and Aaron Morrison of The Associated Press. 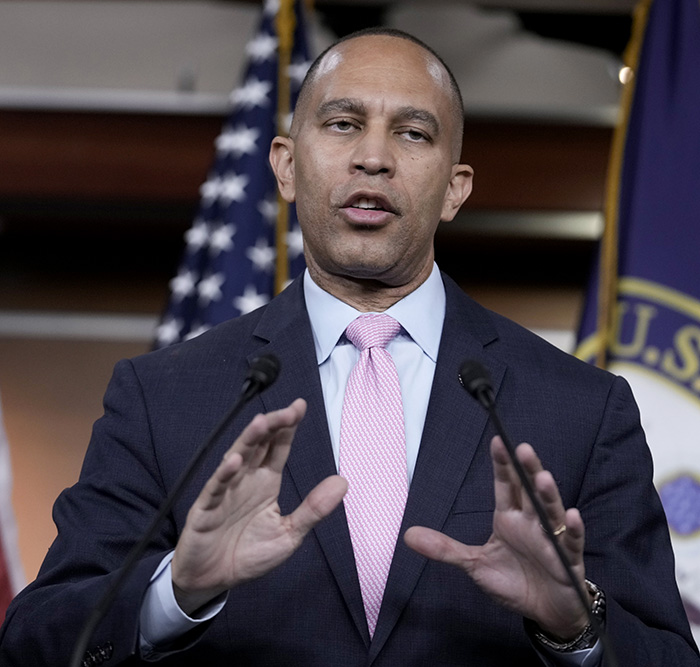 Rep. Hakeem Jeffries speaks to reporters Wednesday just after he was elected as next Democratic leader of the House in a jubilant session with colleagues. (AP/J. Scott Applewhite)