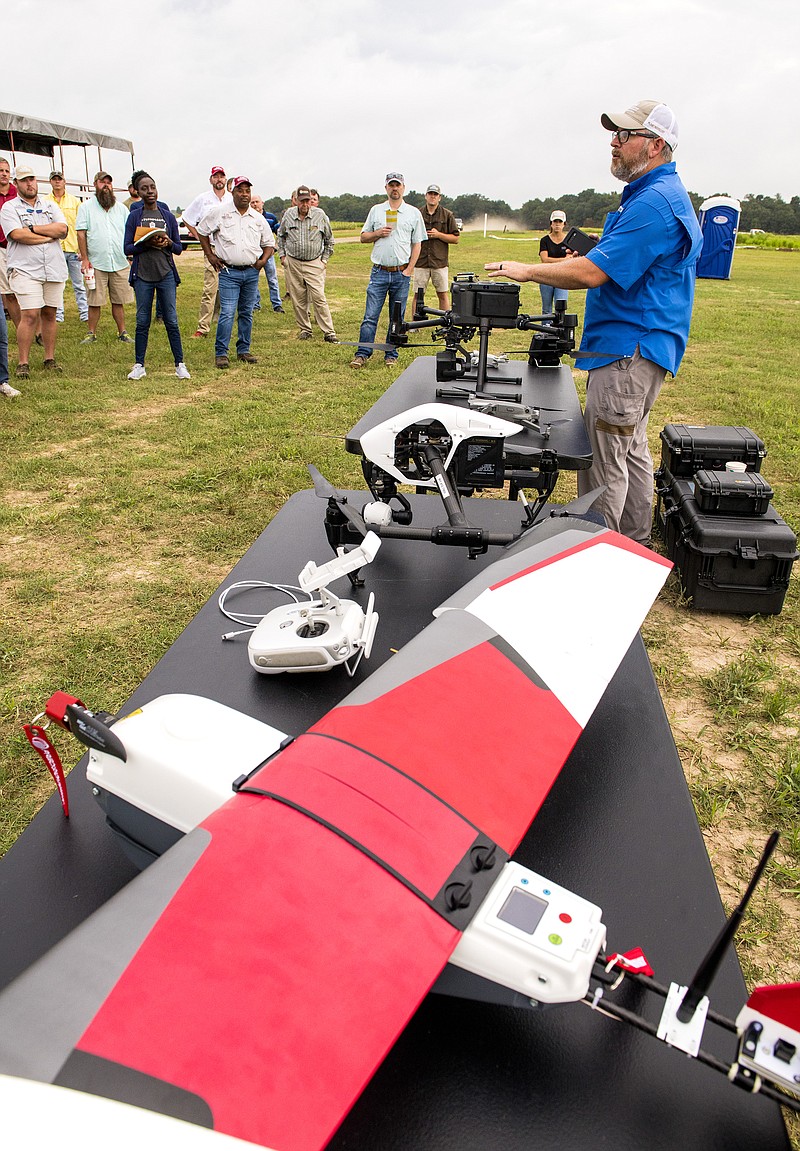 Terry Spurlock speaks about the use of drones in agricultural research and management during the 2022 Rice Field Day at Stuttgart in August. (Special to The Commercial/Fred Miller/University of Arkansas System Division of Agriculture)

Unmanned aircraft flying over farms, forests and plant nurseries are not such an unusual sight these days. A lot of research has gone into making the drones more economically beneficial in agriculture, from taking inventory at plant nurseries to spotting early signs of crop stress.

The University of Arkansas System Division of Agriculture's research and extension arms were among the institutions recently recognized for drone research and outreach with the National Excellence in Multistate Research Award.

The honor was presented by the Experiment Station Section of the Association of Public and Land-Grant Universities' Commission on Food, Environment, and Renewable Resources.

The project is supported by the State Agricultural Experiment Stations from the Hatch Multistate Research Fund provided by the U.S. Department of Agriculture's National Institute for Food and Agriculture.

James Robbins, a recently retired horticulture professor and extension specialist with the Division of Agriculture, was among the authors of agricultural drone research projects recognized in the award. He took part in studies that measured the accuracy and efficiency of drone-based systems for inventory in nurseries using RFID (radio frequency identification), as well as using cloud-based artificial intelligence software like IBM Watson Visual Recognition to identify early indicators of water stress in row crops.

Randy Raper, administrative adviser for the multistate drone research program, said collaboration between researchers across the country has been key to adapting the new technology to agricultural uses. Raper also serves as assistant vice president of facilities for Oklahoma State University and assistant director of OSU Ag Research.

"One thing we saw with this committee is that we have people very versed in different areas," Raper said. "We have people who are astute in flying the UAVs and then others who are interested in sensors, and others who apply the research. Every institution can't have experts in every area, so collaboration has been very important to shepherding this technology."

He compares the emerging technologies and applications of UAVs to the RTK-GPS tractor guidance systems that emerged in the early 2000s and have now become universally adopted. Satellite imagery was also being used to analyze crop production before UAV systems gave advantages to researchers, he said.

"Satellite images can be problematic because of cloud coverage, and what we are looking at is time sensitive," Raper said. "UAVs and UAS technology allow you to have more control. You can collect the data and make rapid decisions on how you want to treat it. This naturally fits into the management we recognize."

Numerous researchers working together have enabled the committee to get the technology to where it is today, Raper said. Annual meetings between researchers across the country allowed for the exchange of ideas and experiences using the UAVs to open potential for further applications. For example, he said researchers in the Northwest experimented with using UAVs for spot pesticide application in orchards. This inspired researchers from other parts of the country to explore related applications in other crops.

"Landscape-level management decisions are increasingly reliant on obtaining accurate and reliable data that can be analyzed in real-time," Thompson said. "Remote sensing with drones provides a versatile means of getting high-resolution information to agricultural managers. I am excited about the work of this group of researchers and congratulate them on this well-deserved recognition."

Thompson said that the association administers this ongoing project, which focuses on challenges in the southern region while being open to participation from institutions across the nation.

"Over the past five years, this project has evaluated and identified reliable, cost-effective, and user-friendly drone platforms and sensors for monitoring and managing stressors in agriculture and natural resources," the Experiment Station Section award noted. "To maximize the accuracy of the data collected, project members have developed hardware, software, and detailed protocols for calibrating and using drones. New drone-based strategies are helping address many different issues in agriculture."

John Lovett is with the University of Arkansas System Division of Agriculture. 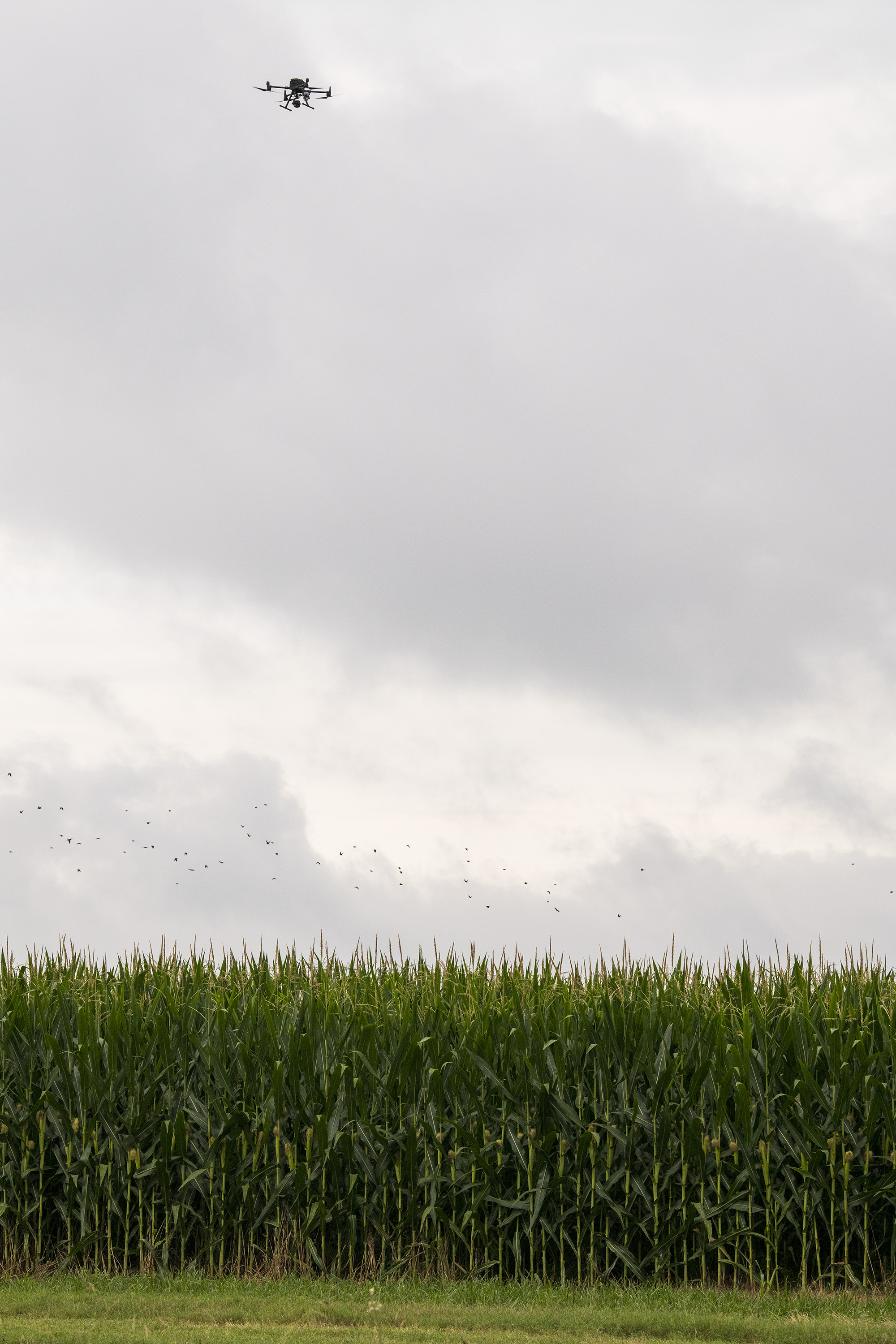 An August file photo shows a drone flying over a corn field. Collaborative research across many states within the Association of Public Land-Grant Universities has propelled the adaptation of drones in agriculture. (Special to The Commercial/Fred Miller/University of Arkansas System Division of Agriculture)