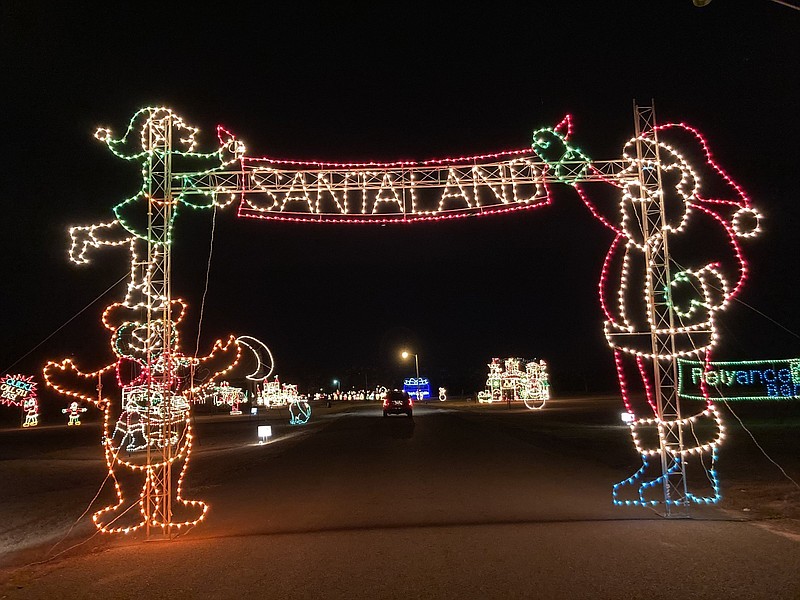 The Enchanted Land of Legends and Lights features almost a million lights as seen in this 2020 file photo. The light trail has struggled with electrical infrastructure problems causing a delay in its opening. (Pine Bluff Commercial file photo/Byron Tate)

The Enchanted Land of Lights & Legends has had a few rocky years of late, including this one.

The 1.3-mile holiday light drive-thru in Regional Park was scheduled to be opened by Thanksgiving weekend, but that didn't happen. The lights also have not been on all week, including after Thursday night's annual Christmas parade.

The delay has frustrated many of those involved in the seasonal project that brings tourists from all over Arkansas and even out-of-state. The blame doesn't appear to fall on any one entity but rather on complicated logistics involving electrical circuitry in a flood plane.

"We are actually working tirelessly as we speak," Kerry Battles, executive director of the Pine Bluff Festival Association, said. "We had major electrical infrastructure problems. We have problems every year, but they are always minor and we can overcome them. This situation is more than one thing. It's multiple things and beyond our control."

"People need to understand what we are dealing with here," Glover said. "There are a lot of moving parts with this event. "We aren't talking 10 receptacles. It's not like lighting a Christmas tree in your house. We are talking 150 or more light displays. But we will have lights this year, and they are not canceled."

The current electrical problems began during the historical June 2019 flood in the park, which Glover's department oversees.

That flood devastated the Regional Park's infrastructure including years of investment in electrical lines, outlets and meters that provide power to the trail of nearly a million Christmas lights.

The city received FEMA funding to repair the damage, but the covid pandemic struck, halting many projects.

Last holiday season, electrical issues also delayed the opening because some electrical boxes had been covered up by floodwaters and others overloaded. Those issues increased fire risk.

"The federal government isn't going to keep giving you money if another flood happens and you haven't done what is supposed to be done to flood-proof," Glover said.

While some people have criticized that the city and the association waits too long to get ready for the light display, Glover said, that work actually begins in early October. Battles said that a lot of work is done that people never see. Both men said they worry about starting too early because of illegal activity in the park.

"Some people think we should start earlier, but we can't start too early because of vandalism," Glover said. "We have had vandalism in the park."

Battles said also that tools and equipment were stolen early this year from a maintenance shed in the park and had to be replaced.

Randall L. Williams Correctional Facility inmates usually help with the massive undertaking. That wasn't the case this year. Battles instead got help from inmates from the Varner Unit. Since they were new to the project, setting up displays took longer because they had to learn the process.

"But even with all of that, I think we could have had everything on time if it hadn't been for the electricity issues," Battles said. "That is what has been the real problem."

It was at the beginning of October when Battles, who was laying the groundwork for the yearly project as he has for 20 years, realized the park had no electricity.

"I wasn't aware of the power issues until we came out to set up," Battles said. "When we went to set up, we realized we couldn't tell what worked and what didn't because we had no power at all."

That started a nearly two-month ordeal to restore power.

Battles said he kept asking about the electricity. Weeks passed, Battles said, before power was finally restored on Nov. 21.

By then, Battles said, he faced a tight deadline to make sure plugs, receptacles and meters operated correctly by Thanksgiving. During this time, he discovered that a meter was missing from the park. That meter, which Glover said was likely stolen, connected electricity to about 40% of the display near the trail's end.

That meter was replaced Friday by Entergy, Glover said. An Entergy spokesman confirmed the meter's installation.

Battles said he and volunteers are working throughout the weekend to make sure every display throughout the park is working properly. He called it "the balancing phase" because to run so many lights requires an intricate balancing act with plugs and receptacles. Different displays use different amounts of electricity. If the system isn't balanced, breakers can trip.

Battles said he hopes that the lights come on Monday night.

"We are doing all we can to make sure that every light is working and nothing is going to trip," he said. "We are going over the maintenance that we do every year. It will take a full weekend of work to make that happen, but we are hoping and are determined."

The good news, Glover said, is once all of the repairs are completed, this should not be a problem next holiday season because a solid electrical infrastructure will exist.

"I sympathize with the families who didn't get to see the light show during Thanksgiving and apologize," Glover said. "I just want to highlight again the fact the light show is not canceled. It's just postponed. We will have the whole season to enjoy those lights."