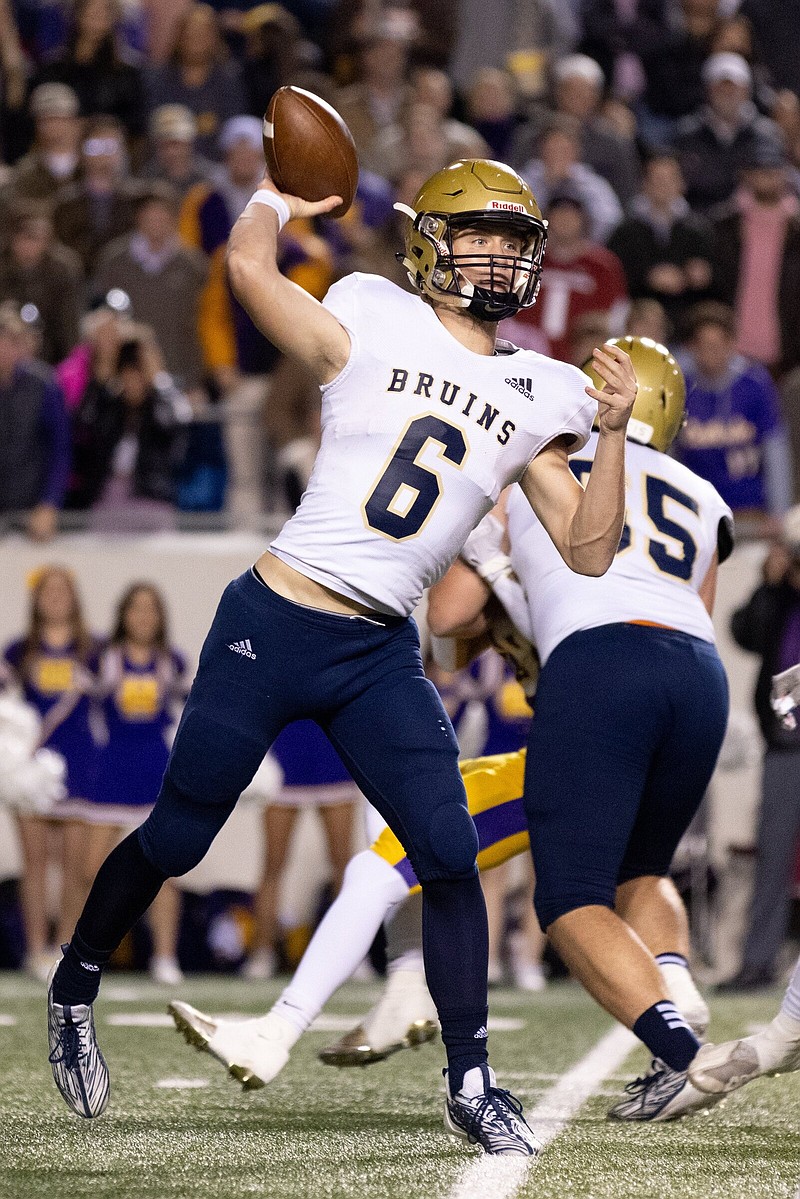 Pulaski Academy quarterback Kel Busby, who is second in the state with 3,782 passing yards, leads the Bruins in the Class 6A state championship game against Greenwood. The Bulldogs won the first matchup between the teams 33-23 on Oct. 28. (Arkansas Democrat-Gazette/Justin Cunningham)

The old sports adage is it’s hard to beat a good team twice.

Greenwood Coach Chris Young plans to put a slightly tougher variation of that to the test at 6:30 p.m. today at War Memorial Stadium in Little Rock in the Class 6A state championship game when his Bulldogs face the same Pulaski Academy squad it beat a little over a month ago.

Greenwood and Pulaski Academy have become the standards for Class 6A and 5A respectively since 2000. The teams have each won 10 state titles over that span to tie for the fourth most in state history.

Games like today’s are what programs spend all year working toward. For PA, in particular, that’s taken seriously.

“Our goal every time we start working out in January after the Christmas break is to win a state championship,” PA Coach Anthony Lucas. “Our kids know that, and it’s been the culture. It’s so great that we get to do this again.” It’s hard to call either team an underdog with that level of recent success. But with PA in its first year moving up to 6A, Lucas has maintained that he views Greenwood as the standard of his new classification.

PA lost the first matchup between these two 33-23 on Oct. 28. Lucas said that game at Greenwood felt like the first of a two-part state final between the teams.

“It was kind of like a state championship game when we played them in Greenwood,” Lucas said. “And now, getting to play them again, you still have that same feeling. … We all know that Greenwood has been the team to beat in 6A.” Both Greenwood quarterback Hunter Houston and PA quarterback Kel Busby, two of the state’s top-four passers, were knocked out of that first matchup with injuries. They are both healthy and scheduled to play in today’s game.

The offensive prowess of these teams can’t be understated. These aren’t the mid-2010s offense of either team, but both still come in averaging over 42 points per game.

For PA, Busby is second in the state with 3,782 passing yards. His top target, wide receiver Jaylin McKinney is third in the state with 1,480 receiving yards. Tight end John Mark Charette isn’t far behind at fifth overall with1,277. Running back Kenny Jordan is just outside the top 10 with 1,542 rushing yards.

For Greenwood, it all starts with Houston. The senior is fourth in the state with 3,318 passing yards. His top target this season has been breakout sophomore Grant Karnes who has 1,214 receiving yards.LJ Robins (923) and Aiden Keenan (716) round out a dangerous receiving core.

“Their wide receivers are very talented, and we can’t let them beat us deep,” Lucas said. “They’ll literally lull you to sleep. They’ll catch a couple of quick [passes], and then they’ll go over the top of you. We just gotta play our brand of football. If we keep everything in front of us, I think we’ll be fine.” If the first meeting between these schools is any indication, today’s game could come down to the defenses — and maybe a bit of luck.

“Part of [beating PA] is you need them to make some mistakes,” Young said. “They’re so fast and athletic at wide receiver, they’re gonna get behind you. You need them to drop some balls and miss some throws. You need ‘em to do some things to hurt themselves.”

WHAT Class 6A state championship WHEN 6:30 p.m.