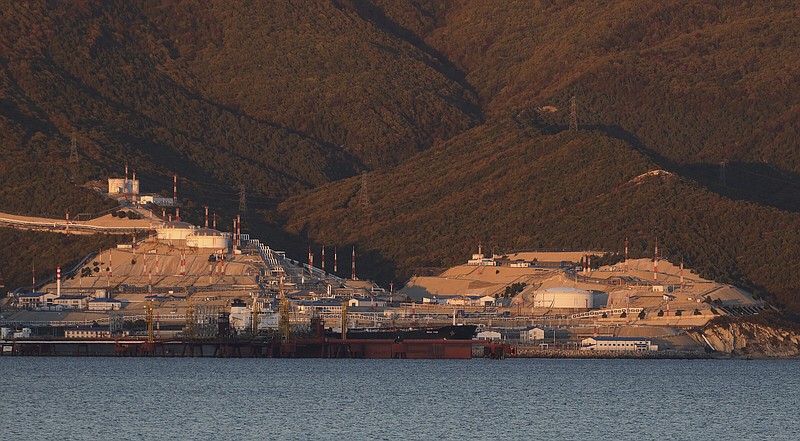 An oil tanker is docked at the Sheskharis complex in Novorossiysk, Russia, in October. This facility is one of the largest for oil and petroleum products in southern Russia. (AP)

Oil officials from OPEC and Russia will meet Sunday to consider production levels, just hours before the European Union begins an embargo of Russian oil and amid intense talks to set a price ceiling on Kremlin crude.

The group, known as OPEC+, is expected to stand pat Sunday, preferring a wait-and-see attitude, analysts say. In October, the oil cartel drew fire from the White House and other quarters after announcing a 2 million-barrel-a-day cut representing 2% of global oil production.

Its immediate challenges are the EU's embargo on most Russian crude, which begins Monday, and progress on a U.S.-led plan to impose a price cap on Russian oil exported to other destinations. But those factors are only part of the problem.

Global economic growth is slowing because of higher central bank interest rates, supply disruptions and inflation. At the same time, demand for oil by China, the largest importer of the fuel, has been dampened from covid-19 lockdowns that have taken a toll on the country's economy and manufacturing capability.

That leaves OPEC+ and its de facto leader, Saudi Arabia, with a tough call to make. "They haven't faced a period of this much shortterm uncertainty in decades," said Raad Alkadiri, managing director for energy, climate and resources at Eurasia Group, a political risk firm.

Outcomes of the embargo and price cap are difficult to forecast but expected to quickly eclipse any move the cartel decides to make over the weekend. Its members also risk taking a share of criticism in the West if prices rise.

"It feels like a time when OPEC+ would rather be in the background than the spotlight," said Richard Bronze, head of geopolitics at the research firm Energy Aspects.

Still, the cut OPEC+ announced in October, despite pressure from the Biden administration to increase production to ease gasoline prices, is expected dampen any hopes that Saudi Arabia and its allies will do anything but act in their own interests, analysts say.

Prince Abdulaziz bin Salman, the Saudi oil minister, warned recently that the group remained "ready to intervene" by reducing supply to bolster prices. Analysts say that if oil prices fall in coming weeks, OPEC+ will not hesitate to cut production.

On Friday, EU officials agreed to cap Russian oil at $60 a barrel, paving the way for a wider Group of Seven deal.

The cap is higher than where Russia already sells most of its crude. That's because one of the main aims of the measure is to keep Russian oil flowing to global markets.

But the cap is less generous than an earlier proposal after pressure from Poland and the Baltic countries.

After long negotiations, those countries succeeded in securing additional conditions aimed at punishing Russia, including a mechanism that would allow for revisions of the price every two months. There's also a plan to make sure any resetting of the cap should leave it at least 5% below average market rates.

The focus now turns to how the Kremlin reacts.

Diplomats have been trying to find a level that's attractive enough to Moscow so that it keeps selling. If it's above the market rate -- as it now is -- Russia and its buyers can argue it's simply business as usual. Foreign Minister Sergei Lavrov indicated Thursday the price cap level was irrelevant.

The risk for oil markets is that if the cap is set too low, Moscow may make good on a threat to shut down production -- sending global oil prices higher.

The United States first proposed the cap amid concerns in Washington that EU sanctions were so strict they would cut off Russian supply and cause a massive spike in global oil prices. The cap provides an off-ramp, allowing buyers adhering to it to access insurance and shipping services that EU sanctions otherwise prohibit.

The U.S. plan was adopted in principle by the G-7 -- with details still to be hashed out as of Friday.

Oil refiners in China have started to snap up Russian crude cargoes after a short hiatus, citing sharply lower prices from ample supplies.

Private Chinese processors, or teapots, purchased several cargoes of Russian ESPO crude for December-January arrival, said traders who asked not to be identified. The shipments traded at wider discounts to global benchmark Brent crude than deals done just weeks ago.

Market observers are keenly monitoring the sale of Russian crude in the run-up to the EU embargo. Specifically, traders are interested to know if China and India can continue to purchase Russian crude, and whether the countries will use the price cap or turn to non-EU providers.

In this case, the final price of the cargoes will not be known until a much later date. That's because the deals are done against the average of Brent's front-month February contract, which can only be tabulated at the end of December. It's also unclear if the cargoes will load before or after the EU's embargo starting Monday.

Traders, however, said that teapots weren't too concerned if their cargoes are hit by EU sanctions or meet the criteria for the cap. That's because purchases were being made on a delivered basis, which leaves the responsibility of shipping and insurance with sellers, the traders said.

It is also believed that the cargoes were bought in Chinese yuan, rather than U.S. dollars, and financed through local banks and institutions.

Those still willing to import Russian crude have been trying to assess their risk of running afoul of the EU sanctions, and whether they can utilize the cap to gain exemptions.

Since Moscow's invasion of Ukraine in February, most western countries including the U.S., U.K. and those in the EU have reduced purchases of Russian oil, prompting a diversion of cargoes to countries such as China, India and Turkey.

Information for this article was contributed by Stanley Reed of The New York Times; Emily Rauhala, Catherine Belton and Karen DeYoung of The Washington Post; and staff of Bloomberg News (WPNS).