PREP FB: Williams next in line to star at ‘Linebacker High’ Greenwood 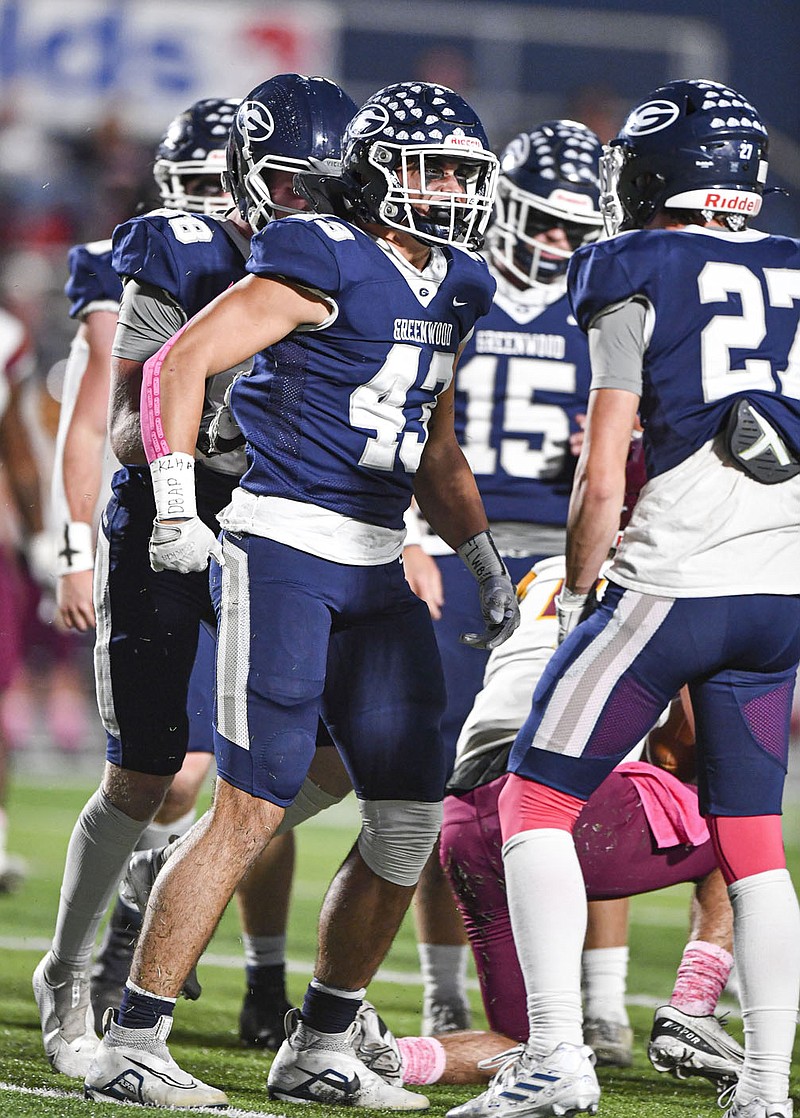 Greenwood linebacker Evan Williams (43) celebrates with teammates after making a tackle, Friday, Oct. 14, 2022, during the first quarter of the Bulldogs' 24-0 win over Lake Hamilton at Smith-Robinson Stadium in Greenwood. Williams and the Bulldogs will take on Pulaski Academy at 6 p.m. today in the Class 6A state championship game at War Memorial Stadium in Little Rock. (NWA Democrat-Gazette/Hank Layton)

GREENWOOD -- Watching from the stands and the sidelines early in his career, Greenwood senior linebacker Evan Williams has seen many talented players showcase their skills for the Bulldogs.

There hasn't been a lack of inspiration for Williams growing up in football-crazed Greenwood observing the defensive side of the ball. Former Greenwood and Arkansas Razorbacks linebacker Grant Morgan stands out to Williams the most.

"What he has done in his career is very special," Williams said of Morgan. "Grant made a big impact here playing both sides of the ball, walked on at Arkansas, earned a scholarship, played so well then went pro. He was fun to watch, could get the job done and is somebody I really look up to here."

Morgan, a 2016 Greenwood graduate, left behind quite the impression on Williams, who wanted to match the passion and desire Morgan possessed to play on defense at a high level for the Bulldogs and Razorbacks.

With Greenwood set to face Pulaski Academy in the 6A state championship game tonight, Williams has followed Morgan's footsteps making a big impact at the linebacker position. Williams enters his final game as a Bulldog with 152 tackles, 13 for a loss, five quarterback hurries, two forced fumbles, a fumble recovery, a pass breakup and an interception that went for a 90-yard touchdown this season. He also recovered the onside kick that was the extra possession needed to down Fort Smith Northside.

Williams' efforts haven't gone unnoticed to Morgan, who still checks in on his former team often. Morgan, who was on the practice squad for the Jacksonville Jaguars this season, knows a great linebacker when he sees one.

He has first-hand knowledge, as Morgan finished with more than 300 career tackles at Arkansas with two 100 or more tackle seasons. Morgan said he has been impressed when he sees Williams and the Greenwood defense, which has issued just 22 points per game this year.

"Evan is a great kid and comes from a great family," Morgan said. "When you watch him play, you notice how much it means to him and how hard he is going every play. That is the mindset instilled by him in the off-season and before the game even begins. He's also the one who is making the big plays to seal games or help tip the game in their favor. And most of all, I love how he shows up angry to the ball.

Greenwood coach Chris Young has followed the career of Williams very closely dating all the way back to the third grade. With Young's son, Cooper, also a senior being the same age, Young has been around Williams quite a bit in his life. Young said he couldn't be more proud of the person and football player Williams has become over the years.

"Evan is just steady," Young said. "He is without a doubt the leader of our defense. He brings it every game and has battled through some injuries and continues to play through them. You are not getting him off that field. I have a ton of respect for him fighting through adversity. He has worked hard and always has a great attitude. He has taken that leadership role this year, which is against his nature. He isn't a real vocal guy. He leads by example and plays hard, which is contagious."

Williams put together a breakout year his junior season. Playing varsity for the first time, he had more than 100 tackles and was named the 6A-West Conference Player of the Year. He has expanded on that season as a senior, finishing among the top tacklers in the state and has nearly tripled his solo tackles.

"I've been blessed here because we've always had good linebackers," Greenwood defensive coordinator Jason Gill said. "Evan had a lot of players in front of him his sophomore year. But he waited his turn and really jumped on the scene for us. He learned a lot as a junior and played well. He just keeps getting better and better. He is now a prototypical senior linebacker being in the system and making sure everyone else knows what's going on."

As the unit gets ready for its last game of the season, the defense is now a polished machine ready to deliver stops for Greenwood. But it didn't start out that way. With only three returning starters back, there was a lot of learning early in the season, especially during the initial two games.

The defense has taken its game to another level in the playoffs. In a second-round victory, Russellville gained just 159 yards of offense, and key decisions on offense were made on the defense's abilities in the semifinals win against Benton.

"They've put together a very good season after it started pretty rough against two good teams," Young said. "We struggled a little bit early. But we have a ton of confidence right now because they've improved every week. I think it all culminated against Benton. We had a fourth-and-5 at the 40-yard line and we didn't go for it. We usually do in a spot like that. But I have all the confidence in the world in our defense.

"They change the game for us."

One of the biggest challenges the defense faced this year was replacing six of its top linemen from last year. Williams and fellow linebacker Caleb Garner know as well as anybody it's hard to make plays at their position without stability ahead of them.

Plenty of players have stepped up though. Tanner McKusker, a converted wide receiver, Eli Whitaker, Brady Pettigrew, Cash Archer and Logan Taylor all have made big impacts on the line.

"There is a lot of excitement on the field with this new crew," Williams said. "After that first game, we grew as a defense and we came together as a team. Those guys up front have done a really good job for us. I'm very proud of them stepping up and establishing that foundation. We've needed them."

If Greenwood is to win its 11th overall state championship and its fourth in the past six years, the defense and special teams will play a big factor. They were key in the 33-23 victory in the regular season against Pulaski Academy. The defense had four takeaways, stopped the Bruins on seven-of-nine fourth-down tries and recovered all four onside kick attempts.

Williams and his teammates are more than up for the task of trying again to slow down Pulaski Academy's prolific offense. But Williams said he knows it won't be easy, as the Bruins are averaging 49 points per game this season and have many talented players.

"It would mean so much to leave here with a win," Williams said. "It's been a very fun year playing with these guys who mean so much to me. I'm ready to be out there on the field. There wouldn't be a place I would rather be."

THE SCOOP Greenwood and Pulaski Academy meet again after the Bulldogs pulled away with a 33-23 victory in the regular season at Smith-Robinson Stadium in a 6A-West matchup. … Greenwood has now reached the finals for three consecutive seasons, while Pulaski Academy, which moved up to Class 6A this season, is in the title game for a ninth consecutive year. … Greenwood has won three of the past five 6A state championships. … Pulaski Academy has won seven of the past eight titles in Class 5A. … The programs have won a combined 20 state titles with each earning 10 apiece. … Greenwood is guided by quarterback Hunter Houston, who has 3,315 passing yards with 30 touchdowns. … Pulaski Academy quarterback Kel Busby leads the way for the Bruins, as he has 3,762 passing yards and 41 touchdowns. … On the other side of the ball, Greenwood linebacker Evan Williams has 152 tackles, while Pulaski Academy linebacker Miles Ward has 7.5 sacks on the season.