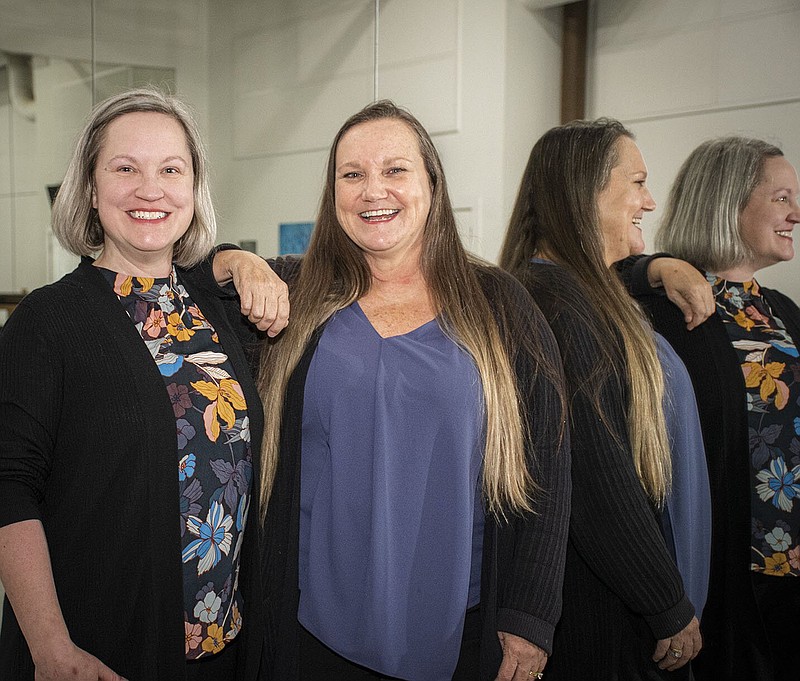 Katie Parson (left) and Vikki Harris are long-time volunteers at Ballet Arkansas and are gearing up for “The Nutcracker Spectacular,” running Friday-Dec. 11 at Robinson Center in Little Rock. “It’s the most wonderful time of year,” Parson says. (Arkansas Democrat-Gazette/Cary Jenkins)

You know the old proverb about how it takes a village to raise a child? Well, it also takes one to put on "The Nutcracker."

More than 400 cast and crew are involved in Ballet Arkansas' "The Nutcracker Spectacular," the largest and longest-running holiday show in Arkansas, which will be presented Friday-Dec. 11 at Robinson Center in Little Rock. Among that number is a small army of volunteers whose time and talents are crucial to not just "The Nutcracker" but for all of Ballet Arkansas' productions and other events throughout the year.

Two of those volunteers are friends Katie Parson and Vikki Harris, who have been involved with Ballet Arkansas for more than a decade. Early last month they were at the dance company's space on Main Street in Little Rock as "The Nutcracker Spectacular" was drawing closer.

Both Harris and Parson started volunteering with Ballet Arkansas when their children were cast in the epic production.

"I got started back in 2009, the first time my daughter was in 'The Nutcracker,'" says Parson, Ballet Arkansas' volunteer coordinator. "Every year after that I just kept taking on more and more."

Parson, who teaches science at Pulaski Academy, also had a brief experience of being part of the "The Nutcracker" cast when she was 6, or maybe 7.

"I was nervous and I cried the whole time walking across the stage, so I never did it again. Performing wasn't my thing."

Harris, who works for Entergy, became involved around 2010 when her daughter Jacey danced in "The Nutcracker."

"When she got involved, I just started signing up to volunteer and doing anything I could do backstage or at check-in. And now I'm Katie's backup when she can't be here."

Originally from Camden, Harris remembers coming to Little Rock to see "The Nutcracker" with her younger sister.

"We came up every year for six or seven years in a row," she says. "It was our tradition."

Here's another tradition. Parson's 17-year-old son, Andrew, who is a full-time member of Ballet Arkansas, and Jacey, also 17, will be in this year's production. The two have been in every "Nutcracker Spectacular" since they were children.

"We both got into it because our kids were dancers," Parson says. "But now, Vikki and I both work all of the shows year round."

Volunteer duties range from ushering at shows to supervising children backstage to helping out during the company's classes and special programs. There are nearly 200 volunteers who help throughout the year, Parson says in an email.

"Some are high school and college students who usher, some are parents of community cast kids who supervise backstage, help with costumes, check the children in and out and basically keep all of the children safe."

"They play such a vital role in our organization," she says. "We have so many events and productions throughout the season that it really wouldn't be possible without the volunteers and the organizations that support us."

The company produces five or six main stage productions each season, she says, along with special events and community outreach programs.

Ballet Arkansas first presented "The Nutcracker" more than four decades ago. This year's production, with the Arkansas Symphony Orchestra, conducted by maestro Geoffrey Robson, performing Tchaikovsky's iconic score, will feature 15 professional Arkansas Ballet dancers, including eight new members, along with a community cast of more than 200 children and adults.

Fothergill's husband Michael Fothergill is the company's executive and artistic director. He is also the chief choreographer of the production, and said in a press release that there will be a few new twists to this year's show.

"I chose to reimagine the choreography for the second act divertissements to highlight the capabilities of the new company members. While versions of old held much meaning and brought joy to many, this year's version represents a bold new area for Ballet Arkansas and features many exciting additions."

And while the dancers and musicians and other crew rehearse and prepare, the volunteers are also getting ready.

"It's the most wonderful time of year," Parson says as she and Harris laugh.

"It's like our Super Bowl," Harris adds. "I save up vacation days so I can take off during the week [of 'The Nutcracker Spectacular']. As soon as I know the production week, I make sure my calendar is blocked off."