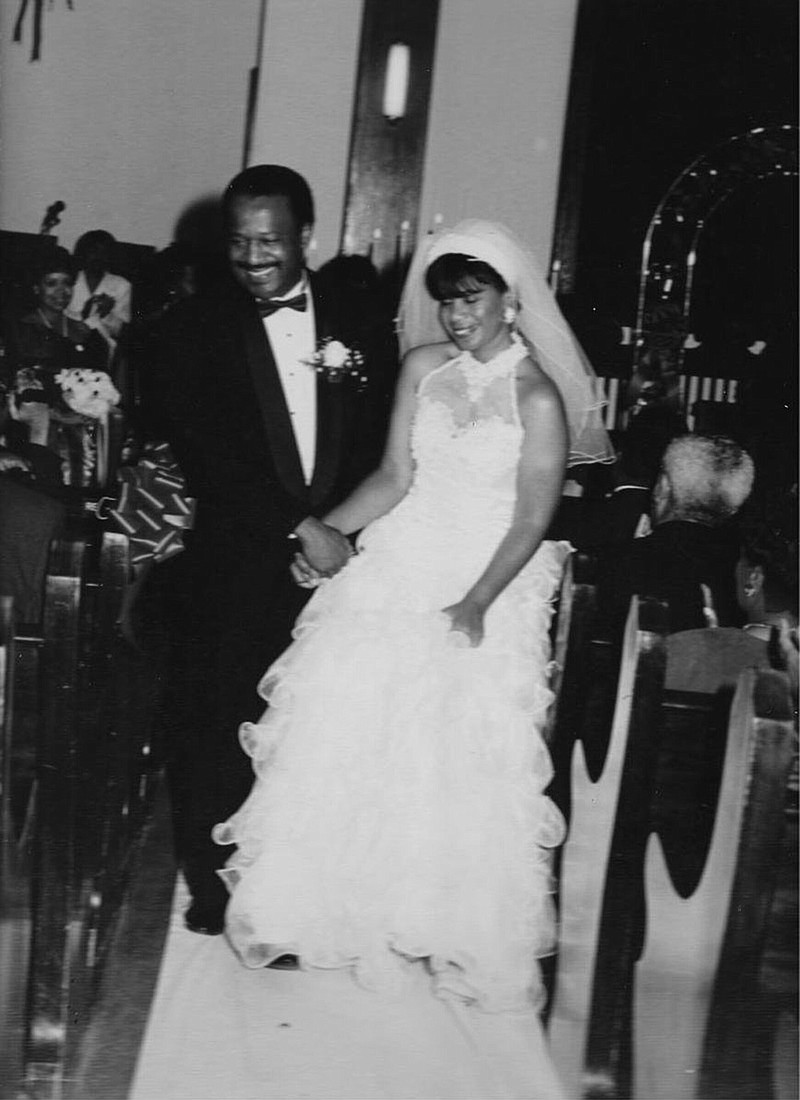 Bob Nash and Janis Kearney on their wedding day

Bob had seen Janis while he was serving on the board of the Arkansas Finance Authority and working as economic adviser for then-Gov. Bill Clinton in the late 1980s.

In 1987, she became managing editor of the weekly Arkansas State Press, and shortly after that she bought the paper from civil rights pioneer Daisy Gatson Bates.

"She told me she felt like I had a fire in my belly that was needed to run a small African American newspaper, because it would demand a lot of me," Janis says.

Bob was impressed when he first saw Janis in a meeting she was covering. Clinton's actions and initiatives garnered frequent attention from the Arkansas State Press, and Janis and Bob saw one another often.

They both worked on Clinton's presidential campaign in 1991.

"I would see her out on the campaign trail on the weekend. I remarked to her about how much I enjoyed reading the Arkansas State Press and the work they did covering Clinton. I liked the work that she did, and I think she liked me, too," Bob says. "We moved on to lunch."

They didn't consider that first lunch, at the little restaurant in the Arkansas Arts Center, to be a date.

"We had talked a lot about politics," Janis says.

"But we had never talked personally," Bob adds. "So we decided we just liked each other. We were interested in the same things."

Both worked long hours, late into the evening, so lunch was the easiest for them to get together.

Janis grew up in Gould, with 18 siblings. He had met several of her brothers because they, too, worked for Clinton while he was attorney general and governor.

"I guess I knew them before I knew her," he says. "It's a phenomenal family. They were the poorest family in Lincoln County when she was growing up, but 18 of the 19 kids in the family went to college."

She was close to her father and she served as his caretaker, and Bob visited her while she was staying there with him one weekend.

"I was going to have lunch with her," he says. "There was only one place to have lunch, and on the menu they had hamburgers, hot dogs, French fries and Cokes -- that was it."

By the time Clinton was elected president, they were dating exclusively.

"We both knew that we wanted to be together, but time was always a problem," Bob says. "We hoped Clinton would ask us to go to Washington."

They got their wishes -- Bob left for Washington about three days after the election to work on Clinton's transition team. He was appointed as an undersecretary in the U.S. Department of Agriculture in 1993 and then assistant to the president and director of presidential personnel.

Janis was asked to serve as Clinton's media affairs officer and then director of public communication for the U.S. Small Business Administration and was appointed a few years later as his personal diarist.

Life in Washington was busy, with minimum 12-hour work days and few days off, but they lucked into a fully-furnished home owned by family of a friend from Little Rock.

"They were getting ready to sell it but he said if I was interested they would lease it to me," Janis says. "I told Bob about it and we decided we were going to move into that house together. That was the best decision we could have made."

They lived there for a year and a half and decided they were ready to get married. Their engagement was just six months.

"We knew we couldn't string it out because we both had responsibilities at the White House and we needed to get back to work," she says.

About 300 guests -- family and friends from Arkansas and from Washington, D.C., and elsewhere -- witnessed their nuptials.

"We went to our reception in a limousine and we had a very beautiful cake," Bob says. "We had a great time."

They honeymooned at Disney World in Orlando, Fla., and then went back to work in Washington.

"We were newlyweds, and we didn't miss a beat," Janis says.

Bob went on to serve as senior adviser to James Lee Witt Associates and then, in 2008, as deputy campaign manager of Hillary Clinton's presidential campaign. When he returned to Arkansas in 2010, he started a consulting firm. He also serves on the board of Arkansas Baptist College and the Arkansas Heart Hospital.

Janis spent a year as a visiting professor at the Arkansas State University in Jonesboro, has authored several books since 2001, and in 2014 she started a nonprofit organization, Celebrate Maya!

Their pace has slowed a bit in recent years, but they stay busy with their activities, both individually and together.

"Our lives have always been us having our own things going," Janis says.

She says: “I thought he was very handsome.”

He says: “We were in the Clinton political meeting.”

She says: “I got a terrible earache and headache afterward, but before that happened I was very excited. My family was there and I was just very happy.”

He says: “I was tired because we actually put this wedding together.”

She says: “Always find humor in your day. Find something to laugh at. I just think that helps a relationship if you can do that.”

He says: “Never, never, never go to bed mad at each other. Always be honest and truthful.”