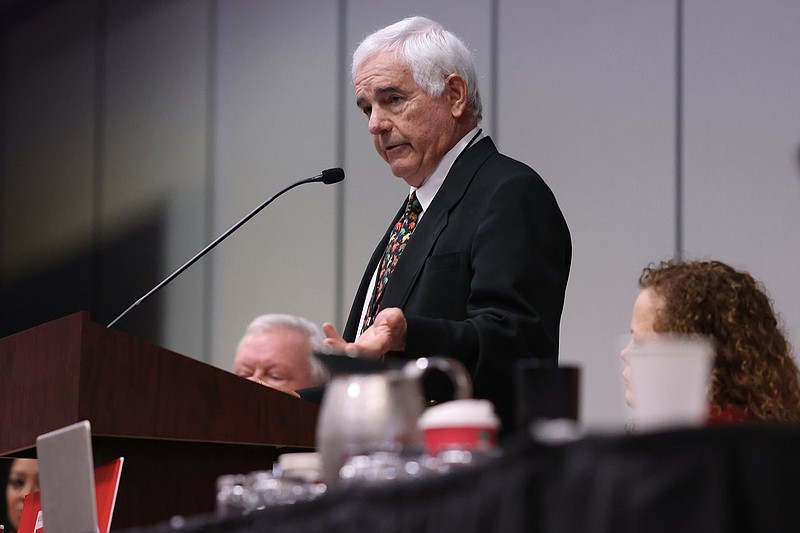 Hiland succeeds Jonelle Fulmer of Little Rock, who had served since December 2020. She replaced former state Sen. Doyle Webb of Benton, who was chairman for a dozen years.

In other action, an attempt to require the State Committee on Saturday to consider proposed party rule changes aimed at allowing only registered Republicans to vote in the party's primaries or to file to run for office as Republicans narrowly failed.

The party's Rules Committee had recommended not making the changes at this time.

In July, delegates to the GOP's state convention voted to declare their support for closed primaries as part of the state party's platform.

During its meeting on Saturday in Little Rock, the State Committee, in a voice vote with one audible dissenter, approved Webb's motion to elect Hiland as chairman and four other people as party officers.

Two months ago, Republican Governor-elect Sarah Huckabee Sanders of Little Rock signaled her support for Hiland to be the next chairman.

At that time, Fulmer said it was time for new leadership and that she supported Sanders' nomination of Hiland to the post.

In a news release, Sanders on Saturday congratulated Hiland and his wife, Jana.

"The Republican Party of Arkansas will have a strong, steady leader with a bold vision to recruit and elect conservative candidates up and down the ballot," she said in a news release.

"Cody has been a tough on crime successful and respected prosecutor and U.S. Attorney, and he had my full support for Chairman from the beginning," Sanders said. "Defeating the radical left and ensu[r]ing we are all fighting to preserve the Arkansas we know and love is our mission, and Cody and I share that belief. The RPA is in good hands under his leadership."

Hiland served as U.S. attorney for the Eastern District of Arkansas from 2017 to 2020 after being appointed to the position by then-President Donald J. Trump. He was previously the prosecuting attorney for the 20th Judicial District, covering Faulkner, Van Buren and Searcy counties, and also served as an aide to then-Republican Gov. Mike Huckabee, who is Sanders' father.

He worked on Sanders' campaign after departing as chief counsel at the state Department of Public Safety, where he had worked from June of 2021 until September.

The Republicans currently hold the state's two U.S. Senate seats, all four congressional seats and all seven of the state's constitutional office posts -- governor, lieutenant governor, attorney general, secretary of state, treasurer, auditor and land commissioner -- and will continue to hold them next year when new officeholders are sworn in.

After he was sworn in as party chairman, Hiland said, "Doyle and Jonelle, you set a real high bar for me to try to follow, and that is going to be real difficult for me going forward based on my previous career."

"But we are going to do it, and we still got work to do," he told the Republican faithful.

"We are going to go down ballot. Anywhere we have an opportunity to move the Republican platform we are going to move it, and that is going to take effort," Hiland said.

He said he thanked Fulmer for the time and energy that she spent as the party's chairman over the past two years. He said she's served with grace and dignity, and that is an example that should be emulated by anybody who wants to follow in her footsteps.

Fulmer said she is being led in a different direction; she believes God has something in mind for her, and she's excited to see what that is. The party's executive director, Sarah Jo Reynolds, said she also is departing from that post after serving for six years.

Hiland thanked the State Committee for electing him, and Sanders for her support.

"And for those of you who are not excited you need to be, because when Jan. 10 comes and we have a conservative Republican Legislature and a conservative governor, we are going to have some success like we have never had before," he said. "We have a window of opportunity here like we've not had before and we are going to turn that window of opportunity into reality. I am 100% confident of that."

They also are going to advance the Second Amendment, the pro-life cause and all lives, he said.

Hiland said he will be paid the same base salary of $60,000 a year that Fulmer was paid.

The other officers elected Saturday included John Parke of Little Rock, who was reelected as the party's first vice chairman, and Julie Harris of Springdale, who was reelected as secretary. The State Committee elected June Wood of Fayetteville as second vice chairwoman to succeed Sharon Brooks of Fort Smith and state Rep. Nelda Speaks, R-Mountain Home, as treasurer to succeed Alisha Curtis of Little Rock. Neither Brooks nor Curtis sought reelection to their posts.

Democratic Party of Arkansas Chairman Grant Tennille could not be reached for comment by telephone on Saturday afternoon.

Under one of the proposed changes, voters would be required to be registered as a Republican to vote in the Republican Party primary election.

Fulmer said a two-thirds vote of State Committee members at Saturday's meeting was required for the committee to consider the changes after the Rules Committee recommended against them.

She said 121 members voted for considering the changes, which was short of the 139 needed.

He said about 7% are designated as Republicans and about 5% as Democrats. About 87% haven't designated a party. A small sliver of others have designated themselves with other parties or as nonpartisan, he said.

"We are the most Republican state in the nation, and we did it with open primaries," Lux said.

He urged the State Committee to give elected officials time to work on the details.

The party's general counsel, A.J. Kelly, told the Republicans there are about a dozen pending lawsuits over Arkansas election law changes, including a lawsuit over third parties. Republicans should wait until that lawsuit is resolved before considering moving to a closed primary, he said.

Under a 1986 U.S. Supreme Court ruling, states cannot require all parties to have closed primaries under state law, "so if we do, it doesn't necessarily mean that the other folks do," he said. In addition, the state of Arkansas currently pays for primary elections, he said.

Democrats cross over to vote in the Republican primaries and elect the person who is the most liberal, Alexander said. He attributed his 2014 primary defeat to Lance Eads of Springdale at least in part to Democrats voting in the primary.

There are other states with closed primary elections, so with Republican supermajorities in the Legislature, "Figure it out, get it done and pass it now," he said.