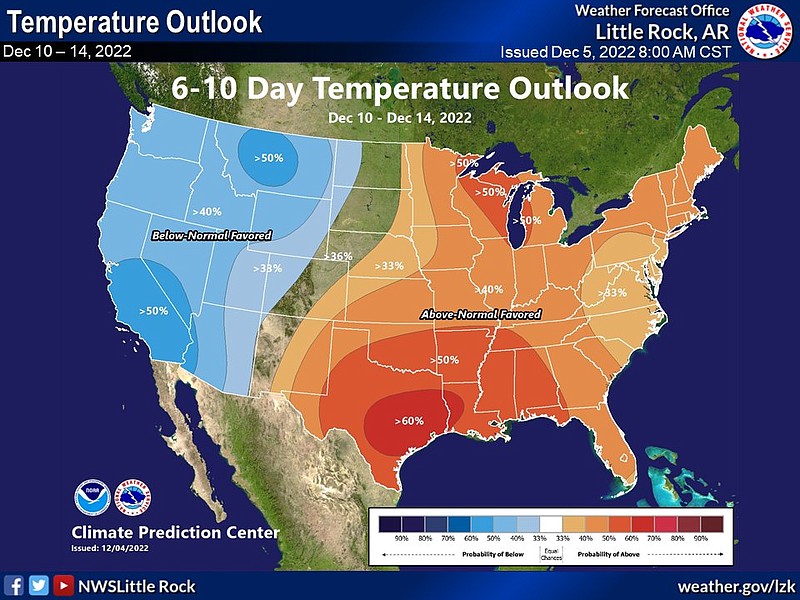 Continuous rainfall and warmer-than-average temperatures are forecasted statewide for much of the week, according to the National Weather Service.

According to the National Weather Service in North Little Rock, highs will reach the low 70s with 70 to 80% chances of rainfall projected through Thursday.

A warm front moving through the state Monday night will contribute to producing rainfall, according to Travis Shelton, a meteorologist with the National Weather Service in North Little Rock.

“There’s a high pressure system over the east and southeast U.S. and over the Gulf, so we’re on the west side of that which means we’re getting a lot of southerly flow,” Shelton said. “It’s just bringing a lot of that Gulf air and moisture across the southern U.S. and the Mississippi Valley area so that’s where all the warm air and moisture is coming from.”

Shelton said, however, a cold front will sweep through most of the state Friday, but some southern counties may not see as much of a cool off over the weekend. Central and northern Arkansas will have the most “noticeable,” cooler temperatures, he said.

“It’s just a lot of fronts kind of shifting back and forth across the state over the next few days with all this extra moisture, so that’s kind of what’s producing all the rainfall,” Shelton said.

By Friday, Shelton said most parts of the state should get a break from the rainfall with drier air forecasted throughout the day. However, he said another round of warm and cold fronts will shift over the weekend, causing more rain to produce statewide.

Northern Arkansas could see up to two-and-a-half inches of rainfall, whereas central and southern parts of the state could see three-quarters of an inch of rainfall through Thursday night.

There is a slight risk of excessive rainfall that could lead to flash flooding in northern Arkansas early Wednesday through Thursday morning, according to Shelton.

He said there is not a threat of major, severe weather at this time.