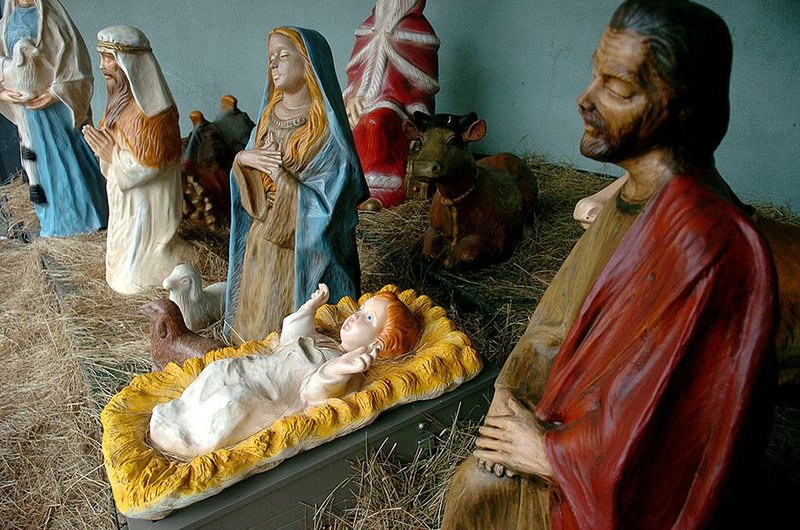 The statue of the baby Jesus rests in a manger as part of a Nativity scene at Basin Spring Park in Eureka Springs in 2009.

The baby Jesus can stay put in his manger in the band shell of a downtown city park in Eureka Springs as long as the executive director of the Great Passion Play gets a permit for the display and pays the $25 fee, Mayor Robert "Butch" Berry said.

On Monday afternoon, Randall Christy said he'll pay the $25 and get the permit. He had kind words for the mayor.

That was apparently after the two men had a tense meeting.

On Monday morning, Christy said Berry told him to remove the Nativity scene in Basin Spring Park but he refused to do so.

Berry said he "asked" Christy last week to remove it.

"I didn't demand, just requested that he remove it," the mayor said, "and he said at that point that he wasn't going to do it."

Berry said a resident of Eureka Springs threatened to file a lawsuit saying the Nativity scene violated his constitutional right to freedom of religion.

"That's all you've got to do nowadays to get city governments to cave in," Christy said. "You just have to threaten a lawsuit. They're going to scramble and avoid their court costs even though they've got an attorney on file. If it's all about Jesus, it's not even worth a few hundred dollars of court costs. That's how I feel."

Berry said he conferred with an attorney for the Arkansas Municipal League who said it might be best to remove the display. If it is allowed to remain, the city can't discriminate against any other religious organization that wants to get a permit and put a display in the park.

"We either had to have it removed or we had to allow everything to be displayed, including people who worship Satan," Berry said. "Based on that, they said it was best if we just not have anything at all."

Since Christy didn't want to remove the Nativity scene, the city will allow it to remain this Christmas season, Berry said. He said a policy will be drafted regarding such displays in the park.

Berry said the Nativity scene was in the park every Christmas from 1950 through 2019. It was sponsored by the Eureka Springs chapter of the Beta Sigma Phi sorority.

For years, the baby Jesus was stolen from his manger in Basin Spring Park, but the prank came to a halt in 2009 after an alarm was attached to the fiberglass Messiah.

Still, the heads of animals in the Nativity scene would sometimes disappear. Often, they were found on a hill behind the band shell.

Christy said the sorority donated the Nativity scene to the Great Passion Play last year, and it was displayed at the gate of the play atop Magnetic Mountain that Christmas. But, Christy said, the sorority asked if the display could be returned to Basin Spring Park this year.

"We said, sure, whatever you guys want," Christy said. "We're just trying to help them."

Berry said he was trying to reach a compromise and conform to what the "U.S. Supreme Court and the Constitution will allow us to do regarding religious displays."

By allowing other displays, the city is being inclusive instead of exclusionary, he said.

"We're going to have to be inclusive and allow everybody and all things in relation to Christmas season to be able to be displayed," Berry said. "It's kind of being inclusive and not discriminating against one religion or another. And I think that's personally what Christmas is all about -- being inclusive."

"They said as long as you allow other secular displays to be displayed, then you're OK," said Berry.

He said there's already a Christmas tree in the park, but another one will be installed in the band shell, near the Nativity scene.

"We're going to issue a permit for them now," Berry said. "We've agreed that we would include secular displays, putting a Christmas tree up there along with the manger, so it's not just a Protestant religion display."

Berry said he sent Christy a text Monday saying, "The city's going to issue a permit for the Nativity scene to remain along with other secular displays in Basin Park in the band shell."

After receiving the message from Berry, Christy posted on Facebook: "I want to sincerely, personally thank Eureka Springs Mayor, Butch Berry, who just notified me in writing that he has changed his mind and WILL NOT require us to remove our Nativity Scene out of the city's Basin Park. He and I will STAND TOGETHER to fight this potential lawsuit. We stand together to keep Christ and the Nativity in Christmas in Eureka Springs!!! I'm proud of Mayor Berry for making the right decision."