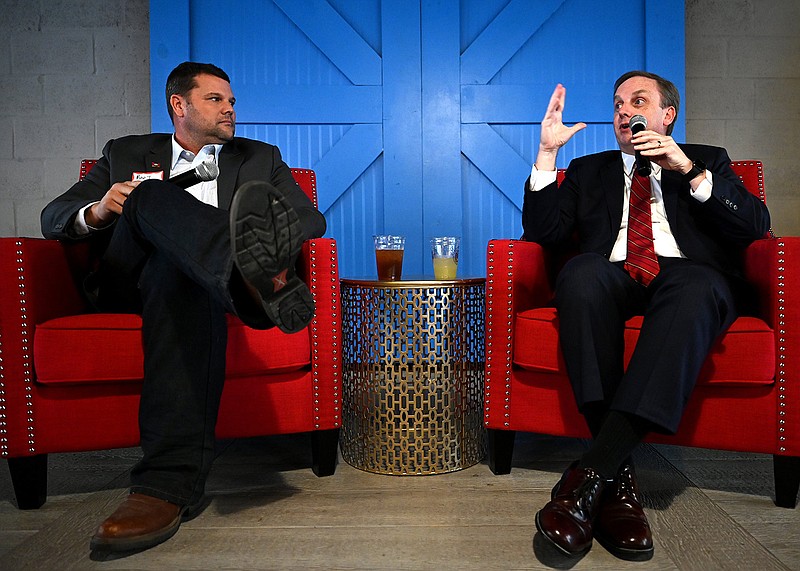 Senate President Pro Tempore-designate Bart Hester, who is in line to lead the Senate from 2023-2025, said the state Senate "has gone through a lot of drama in the last couple of years.

"I hope most of that, if not all of it, is behind us and we are going to work really well together," the Cave Springs Republican told about 90 people attending a luncheon meeting of the Political Animals Club at the Red & Blue Events Venue in Little Rock.

Hester said "prison reform" will be among the Senate's priority issues in the regular session, and that will affect all of the counties because the state needs to get state inmates out of the county jails and build a prison.

He said he wants to build a bigger prison than anyone else.

"I am for locking up repeat violent offenders," he said.

"We got to get prison reform right," he said. He said he has assigned Sen. Ben Gilmore, R-Crossett, to lead on prisons.

Hester said the Senate wants to continue to cut income taxes in the coming session.

He said that term-limited Republican Gov. Asa Hutchinson has done a great deal in leading the state in cutting income taxes during the past eight years, and the state must continue to cut income tax rates to be competitive with surrounding states.

"It is a constant fight," he said.

Hester said "education reform" will be a priority for the Senate in the coming session.

It's unacceptable that only one-third of children can read at grade level, he said, and it's a pipeline to prison.

House Speaker Matthew Shepherd, R-El Dorado, who has served as the House's leader since June 2018, said he agreed with Hester that criminal/prison and education issues and continuing to cut taxes will be major issues in the coming session.

Both Hester and Shepherd said details of school choice legislation have yet to be determined.

Hester said "from my perspective, it will be as aggressive as possible." Lawmakers must focus on children and reading, and not the school, school district or what type of school, he said.

"We have got to start focusing on the kids. If the kids can read, we can readjust," Hester said.

He said he has assigned Sen. Breanne Davis, R-Russellville, to lead on the "education reform" package in the Senate.

Asked afterward whether he wants to send the same amount of state money for each student to the public schools and parents of home-schooled students and private school students, Hester said he is for "as aggressive as possible" school choice legislation "as we can get votes."

He said he wants the money to follow the student, but that type of legislation would have to be implemented over time.

"You can't make changes and say we are doing all of this next year," Hester said.

He said he wants to look at what is working in other states.

Shepherd told the club there are different ideas regarding school choice among lawmakers.

"It remains to be seen what those details look like," he said.

After those three issues are decided, he wants the Senate to look at other issues, he said.

With fewer students graduating from high school, "it is going to be a rough road" for the colleges and universities in the next few years, Hester said.

Shepherd said there is discussion in the House of Representatives about continuing to strengthen workforce and skills training programs and the two-year colleges to provide options for students in addition to a four-year degree.

Hester said he wants to tackle health care professionals being able to do their jobs without a constant fear of being sued.

"We are going to work on that as well," he said.

As for the expected pace of the session, Hester said the main issues are so big that state lawmakers can't be ready to tackle them on the first day of the session.

"I suspect we'll move swifter than normal, if the new governor-elect has any influence on that," he said, referring to priority issues.

"We want to be ready to move forward from day one," and to be as efficient as possible, he said.

Sanders is scheduled to be sworn in Jan. 10 as Arkansas' first female governor.