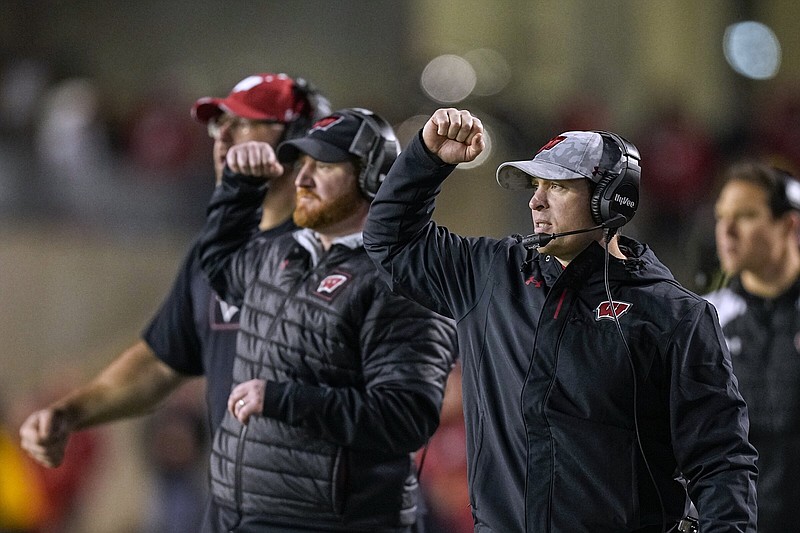 Jim Leonhard (right), who served as Wisconsin’s defensive coordinator from 2017-22, is a potential candidate for the Arkansas defensive coordinator job, sources within the college football industry have said. Leonhard was the Badgers’ interim coach for the final seven games of the 2022 regular season after Paul Chryst was fired. (AP/Andy Manis)

FAYETTEVILLE -- For the first time in his three years as head football coach at the University of Arkansas, Sam Pittman is having to find a new coordinator.

In defensive coordinator Barry Odom's departure for the head coaching job at UNLV, Pittman lost not just a coordinator, but a friend, advisor and walking companion.

Pittman's search for a defensive coordinator came just days after he tabbed Ben Sowders to head up the football team's strength and conditioning program.

The Arkansas Democrat-Gazette reported Sowers' hiring on Monday, the day after Pittman said the new strength and conditioning coach would be announced soon and the UA made it official on Wednesday.

Sowders, who will turn 37 on Dec. 20, spent the 2022 season at Louisville in his first season as a director of strength and conditioning at a Power 5 school. Prior to that, he was an assistant on the staff at Georgia for Coach Kirby Smart for four years, overlapping with Pittman in 2018-19 when Pittman was the offensive line coach.

A native of Bowling Green, Ky., and a former walk-on at Western Kentucky, Sowders earned a scholarship and became a two-year starter at linebacker.

The Razorbacks had another defensive back enter the transfer portal on Wednesday, as redshirt freshman Keaun Parker announced via social media he was planning to transfer.

Pittman knew Odom had interest in returning to a head coaching role from the day he came on board with Pittman's first staff in December 2019, so he knew the day would come he'd have to pull out his wish list of potential defensive coordinators.

While he and his staff continue to recruit heading toward the Dec. 21 signing period, he now has to replace the sounding board he used as a first-time major college head coach.

The loss of Odom could be accompanied by further movement. Linebackers coach Michael Scherer is an Odom protege, having played linebacker at Missouri during Odom's tenure as defensive coordinator and then head coach and coming aboard on the Arkansas staff after the 2020 season.

Additionally, cornerbacks coach Dominque Bowman worked closely with Odom during the last year and their relationship dates back to Odom's days as defensive coordinator at the University of Memphis (2012-14).

Pittman would want a new coordinator installed as quickly as possible to secure recruits and transfer players with the two-day signing period coming up in two weeks.

Sources within the industry say former Wisconsin player and interim head coach Jim Leonhard is a potential candidate for the job. New Wisconsin Coach Luke Fickell has said there's a position available for Leonhard on the staff, but Leonhard indicated on Tuesday that he would not return in 2023.

"It has meant the world to me to be able to pour my heart and soul into the UW Football program over the last 7 years," Leonhard posted on his Twitter account. "After discussions with my family and Coach Fickell, I will remain the DC through the bowl game but not longer be a part of the staff after the conclusion of the 2022 season."

Wisconsin (6-6) will take on Oklahoma State in the Guaranteed Rate Bowl in Phoenix on Dec. 27.

Leonhard, a former walk-on and three-time All-American defensive back, has spent the past seven seasons as an assistant coach with the Badgers, the last six as defensive coordinator. He was appointed Wisconsin's interim head coach after Paul Chryst was fired in October and led the Badgers to a 4-3 record against Big Ten competition.

Leonhard was a finalist for the Broyles Award in 2017, his first as defensive coordinator. That season, the Badgers went 13-1, losing only in the Big Ten Championship Game to Ohio State (27-21), and ranked second in the country in total defense (262.1 yards per game). This season, Wisconsin was No. 13 in total defense (305.4) and No. 25 in scoring defense (20.5 points per game).

There are other defensive coaches with ties to Pittman who could be candidates.

Ansley was defensive coordinator and defensive backs coach at Tennessee in 2019-20 under Jeremy Pruitt.