They hope 51-49 edge simplifies legislation by Compiled by Democrat-Gazette staff from wire reports | December 8, 2022 at 5:19 a.m. 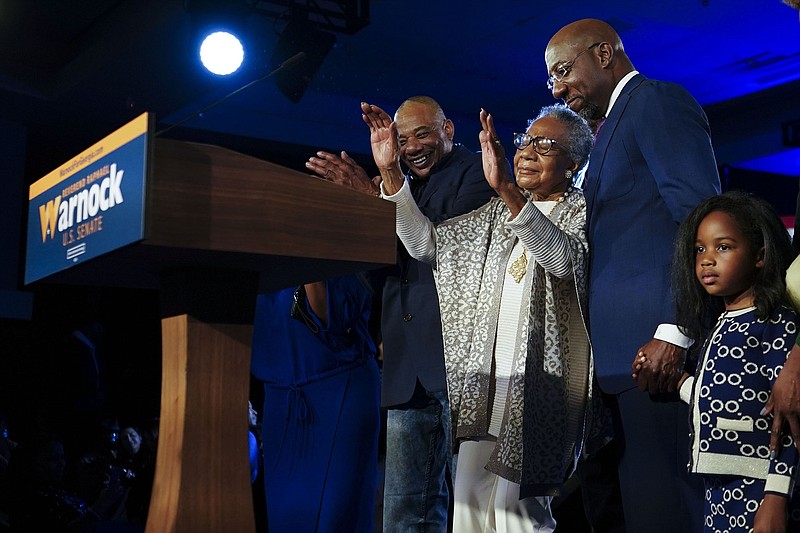 "After one year, 10 months and 17 days of the longest 50-50 Senate in history -- 51!" Senate Majority Leader Charles E. Schumer, D-N.Y., said Wednesday at a victory-lap news conference. "A slim majority! That is great and we are so happy about it."

Sen. Raphael Warnock's victory in swing-state Georgia gives Democrats a welcome "lift," Schumer said Wednesday at the Capitol -- newly confident of sidelining Trump-inspired Republicans in Congress and reaching across the aisle to other GOP lawmakers to deliver on bipartisan priorities with President Joe Biden.

Tuesday's election was for just one seat, but Warnock's win in the tight runoff provides an unexpected capstone to the midterm election cycle for his party. It makes easier for Senate Democrats to organize and govern, and provides a crucial edge in a divided Congress as Republicans take hold of the House.

Gone is the especially intense political pressure of a 50-50 Senate that required all Democrats to toe the line -- and made it possible for a single senator, notably West Virginia's Joe Manchin, to buck party priorities.

The moderate was sometimes dubbed "President Manchin" given how much sway he had over legislation Biden and Schumer wanted to pass through the budget reconciliation process, where his vote was necessary to clear the 50-vote hurdle.

When the new Congress assembles in January, the extra seat will give Senate Democrats a solid majority that provides greater control over not just floor votes but also the committees, which provide the core of legislating.

And mostly gone will be the days when Capitol Hill came to a standstill awaiting Vice President Kamala Harris' motorcade for her role of breaking tie votes -- particularly for Biden's nominees -- which she has had to do more often than any predecessor.

After the longest evenly split Senate in modern times, the new dynamic ensures the chamber will serve as a barrier to legislation from the Republican House that Democrats disagree with -- and a potential bridge for bipartisan deal making as Republicans assess the post-Trump landscape.

While it still takes 60 votes to overcome a filibuster and advance most bills in the Senate, there will be ample grounds for compromise, particularly if Republican leader Mitch McConnell is eager to show voters his party can deliver ahead of the 2024 presidential and congressional elections.

McConnell was silent Wednesday on Warnock's victory and the new political reality.

In January, for starters, Democrats will have an easier time using their 51-49 majority for simple tasks of governing, including votes on Biden's nominees to judicial and executive positions, which Republicans have wielded as weapons.

The Senate has had to vote to discharge nominations 24 times this Congress, with 22 still waiting, according to Schumer's office.

The same goes for committee action. The Democrats will now have full power to send legislation to the Senate floor, overcoming Republican objections that can drag out the process. They also will have subpoena power, which they plan to use for investigating corporate America.

"The subpoena power is going to be very important, especially as the House goes into overdrive on investigations," said Sen. Chris Van Hollen, D-Md. "It will provide some check and balance."

Schumer declined to specify what oversight targets Senate Democrats would pursue, but suggested "corporate corruption and inequities and other problems throughout the country" would be among them.

Judiciary Committee Chairman Dick Durbin, D-Ill., had kind words for the top Republicans on what has been his evenly divided panel.

"Chuck Grassley is a friend, we've been able to work together. And I'm confident we can do that again with Senator Graham," said Durbin, referring to Lindsey Graham of South Carolina, who will take Grassley's place in the new Senate.

"But," said Durbin, "we're in a better position to bargain."

"Right now in 50-50 ... it's a very slow process," added Sen. Gary Peters, D-Mich., the chairman of the Homeland Security Committee. "You can't move folks through as quickly as we should. It's really critical that we fill key positions."

"It is good for the efficiency of the Senate," said Sen. Sherrod Brown, D-Ohio, chairman of the Banking Committee, where united Republican opposition held up some of Biden's nominees for a time this year. "We can be more nimble, we will be a lot quicker, we will be a little more decisive and that's good. It doesn't mean we will pass everything."

Key Republicans had regrets Wednesday over their failure to pick up that vital 51st seat, blaming their losses in large part on the party's focus on relitigating the 2020 election that Donald Trump, the former president, lost to Biden.

"That was a losing argument," said Sen. John Thune of South Dakota, the No. 2 Republican, about the stolen election claims.

Walker sought to make the race for the seat an issue even after Democrats clinched the Senate majority last month with the victory of Sen. Catherine Cortez Masto in Nevada.

"If I lose this runoff, Democrats will have a 51-seat majority where the most radical proposals will succeed," a fundraising appeal from Walker said. "We cannot let that happen."

His party lost the GOP-held seat in Pennsylvania that was open due to a retirement. Every Democratic incumbent won, an unexpected accomplishment and a first for a party in power in decades.

With the House, however, flipping to GOP control in January, it will be far less likely that any party-line legislation would make it to Biden's desk anyway. Many House Republicans ran on a platform of blocking Biden's agenda and cutting back the federal government's spending.

Republicans downplayed the significance of the Democrats' newly padded majority, pointing out that the House will serve as a check on liberal legislation originating from the Senate next year.

"It just means it's a little easier for Democrats to confirm their nominees," said Sen. John Cornyn, R-Tex. "Beyond that it doesn't mean much. You still gotta get 60 votes to move legislation, and as long as the filibuster is intact the Democrats won't be able to pass any reconciliation bills because of the House. So I think we're pretty much where we were before."

As Republicans struggle to emerge from the midterms, Democrats intend to capitalize on the GOP's Trump divisions and win over some Republicans for bipartisan projects -- much the way they did this session in passing a bipartisan infrastructure bill, a computer chips package and others.

"There are a good number of Republicans in the Senate and the House who are not MAGA," Schumer said, referring to Trump's campaign slogan, Make America Great Again.

"It is my intention to reach out to them" and see how both sides can work in a bipartisan way, he said.

"You say, 'Oh, that will never happen,'" Schumer said, answering likely skeptics. "Well look at what happened this summer with 50-50."

Schumer declined to outline the party's agenda for the new term, saying it's still a work in progress. Both parties are expected to take their annual retreats at the start of the year to assemble their priorities.

Sen. Bernie Sanders, the influential Vermont independent who caucuses with the Democrats, said the increased majority will make it "much easier to go forward in a progressive way."

On the campaign trail, Warnock at times hyped up how having a 51st Democratic seat in the Senate would open more possibilities for what the party can get done in Washington.

At the rally, he explained that having 51 Democrats could have made a difference in those debates, as Democrats ultimately got on board with a voting rights bill but did not all agree to suspend the filibuster rule that requires 60 votes to pass most legislation.

Information for this article was contributed by Lisa Mascaro of The Associated Press, Liz Goodwin, Sabrina Rodriguez and Leigh Ann Caldwell of The Washington Post and by Carl Hulse of The New York Times. 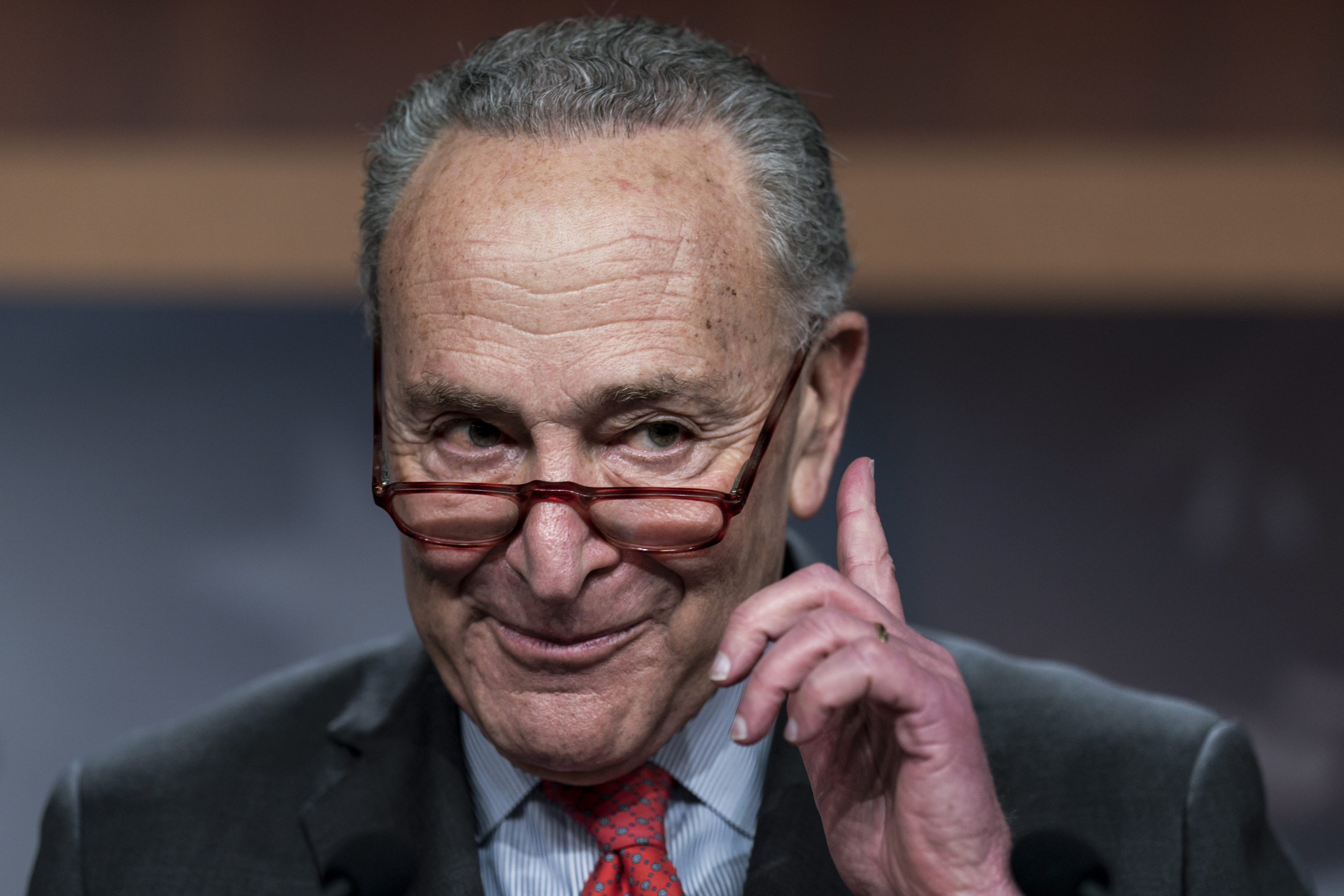 Senate Majority Leader Chuck Schumer, D-N.Y., speaks with reporters after Democratic Sen. Raphael Warnock defeated Republican challenger Herschel Walker in a runoff election in Georgia last night, at the Capitol in Washington, Wednesday, Dec. 7, 2022. Democrats' new outright majority in the Senate means the party will no longer have to negotiate a power-sharing deal with Republicans and won't have to rely on Vice President Kamala Harris to break as many tie votes. (AP Photo/J. Scott Applewhite) 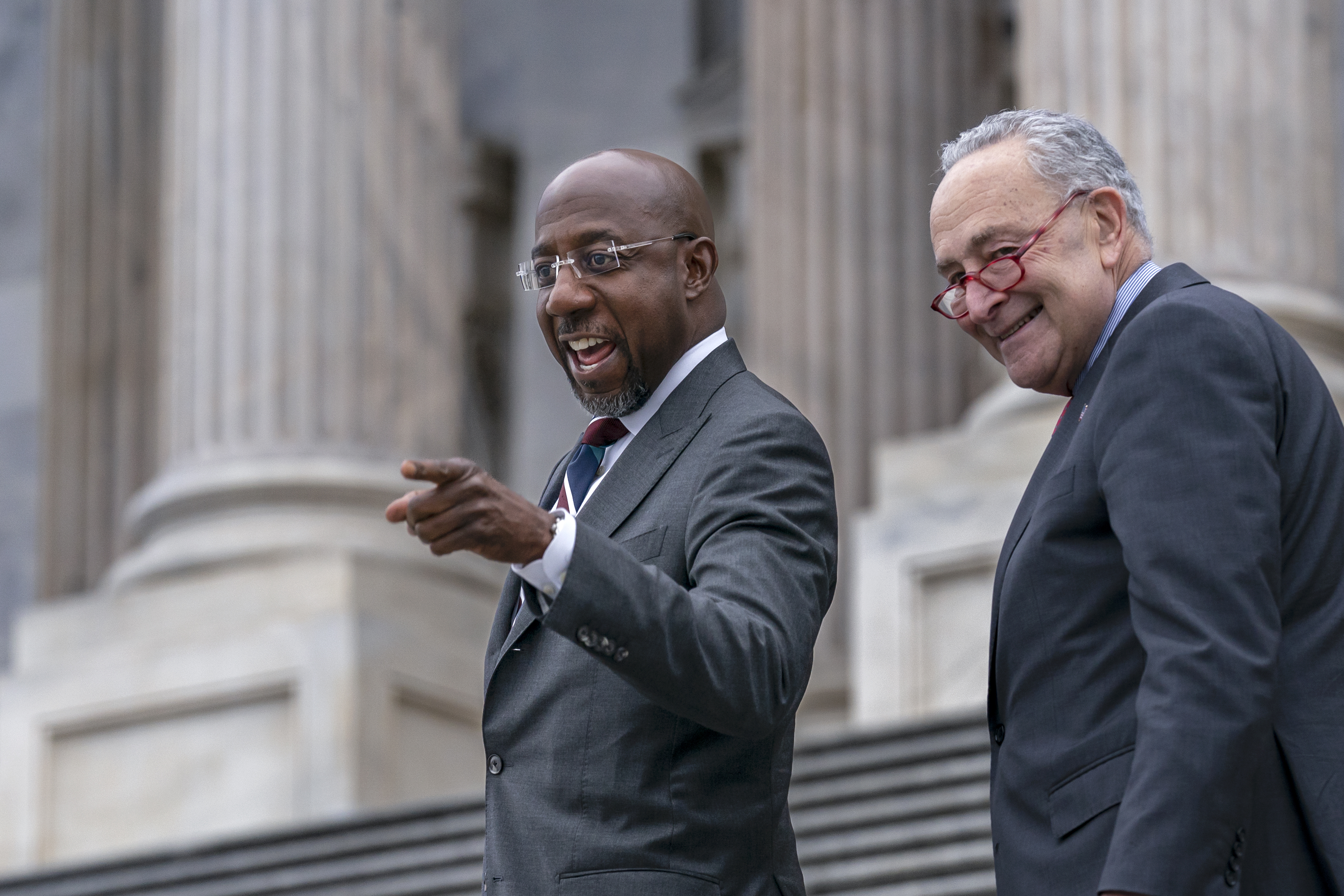 Sen. Raphael Warnock, D-Ga., left, is welcomed to the Capitol by Senate Majority Leader Chuck Schumer, D-N.Y., after Warnock defeated Republican challenger Herschel Walker in a runoff election in Georgia last night, in Washington, Wednesday, Dec. 7, 2022. The Democrats' new outright majority of 51-49 in the Senate means Schumer will no longer have to negotiate a power-sharing deal with Republicans and won't have to rely on Vice President Kamala Harris to break as many tie votes. (AP Photo/J. Scott Applewhite) 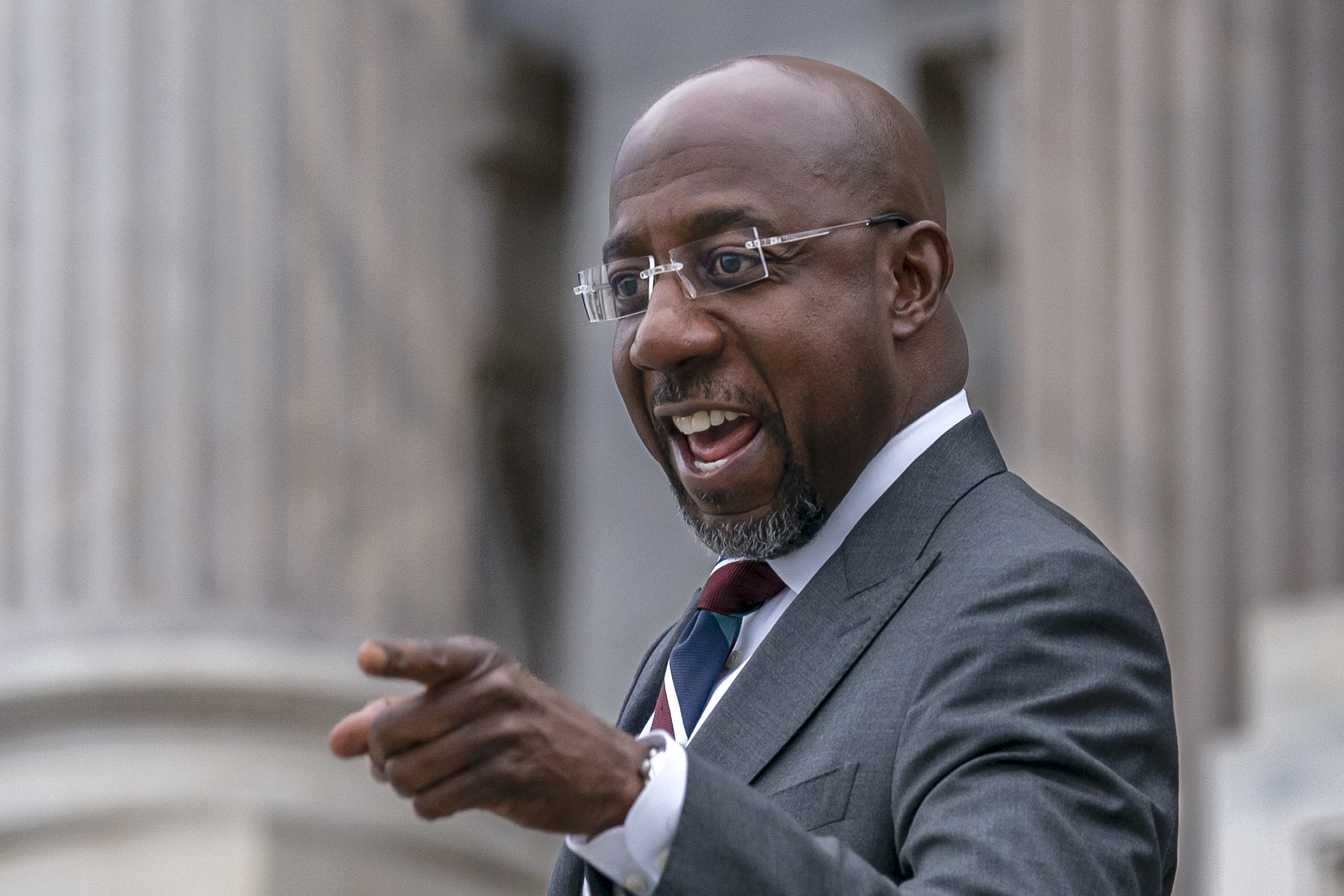 Sen. Raphael Warnock, D-Ga., arrives at the Capitol after defeating Republican challenger Herschel Walker in a runoff election in Georgia last night, in Washington, Wednesday, Dec. 7, 2022. The Democrats' new outright majority of 51-49 in the Senate means Schumer will no longer have to negotiate a power-sharing deal with Republicans and won't have to rely on Vice President Kamala Harris to break as many tie votes. (AP Photo/J. Scott Applewhite) 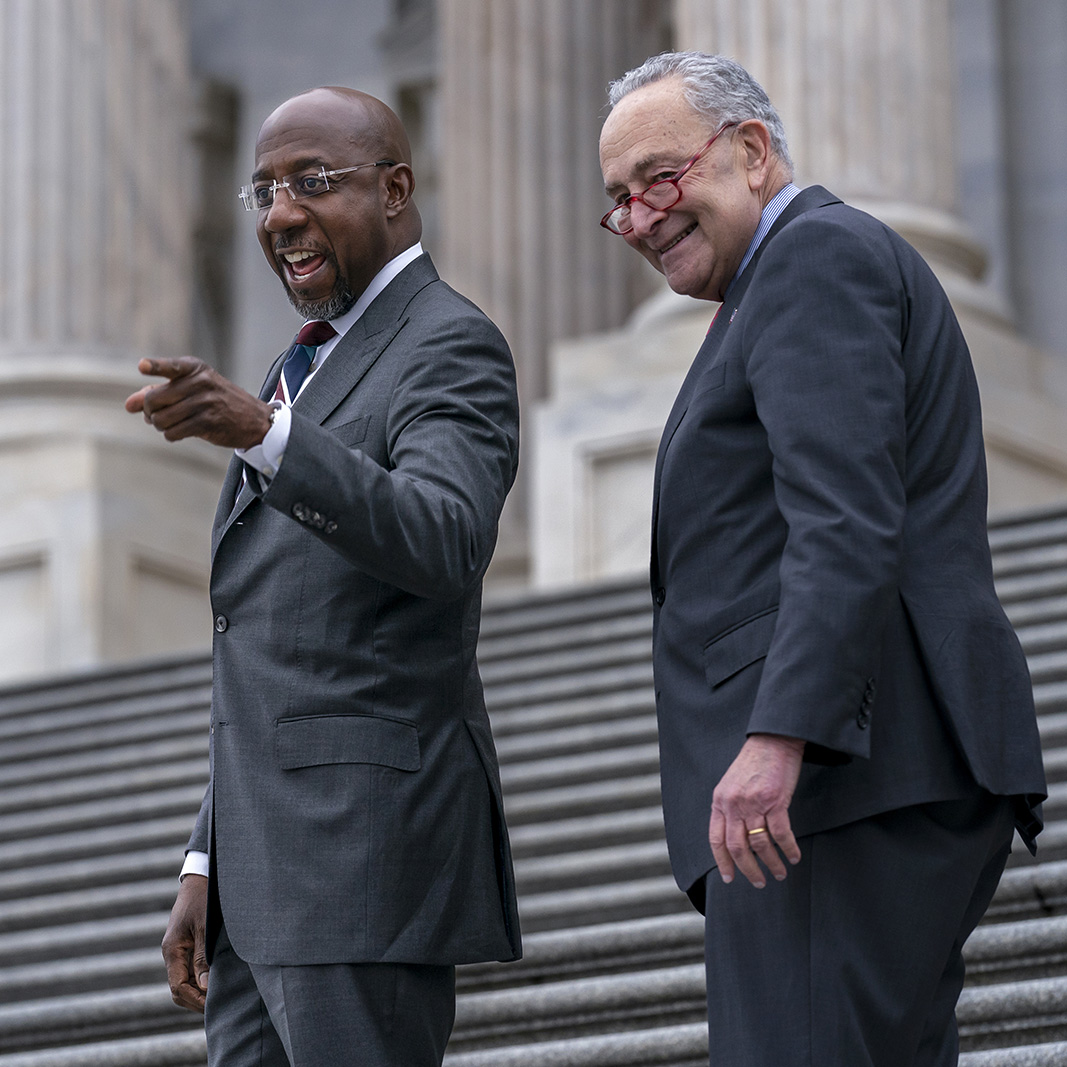 Sen. Raphael Warnock and Senate Majority Leader Charles Schumer celebrate Warnock’s reelection Wednesday on the steps of the U.S. Capitol. With the pressure of a 50-50 Senate no longer an issue, Schumer sounded confident of achieving bipartisan legislation that “will of course be better for the country.” More photos at arkansasonline.com/128win/. (AP/J. Scott Applewhite)