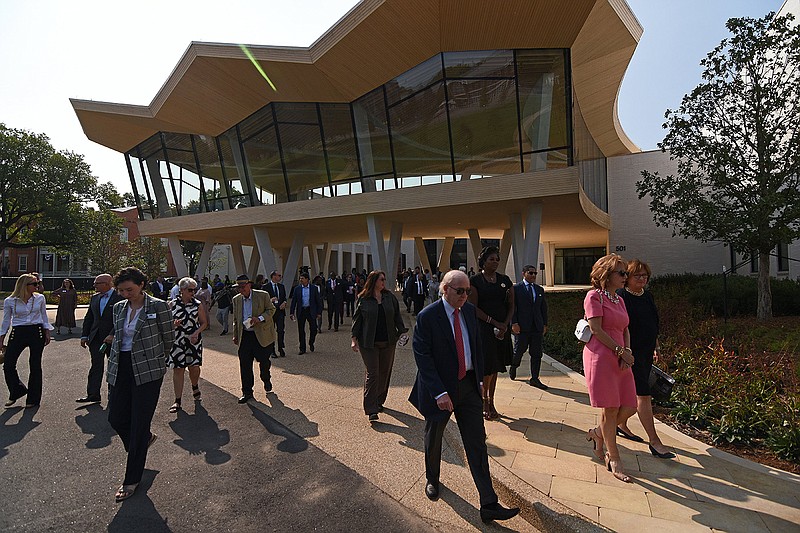 Anne Bartley of San Francisco said Wednesday she has cut the Arkansas Museum of Fine Arts out of her will.

Bartley, the step-daughter of former Gov. Winthrop Rockefeller, said she had planned to leave $500,000 to the museum.

But that is no longer the case.

Bartley said she had a 1998 agreement with former museum Director Townsend Wolfe to name a permanent collection gallery in the museum for her mother, Jeannette Edris Rockefeller.

"As part of this agreement, I would designate half a million dollars in my will for the muchly deserved and appropriate recognition of her founding role as well as personal and financial commitment to the creation of the Arkansas Arts Center in its early struggles," said Bartley, using the museum's previous name.

In 1959, in cooperation with the museum's Fine Arts Club, the Little Rock Junior League and the city of Little Rock, Winthrop and Jeannette Rockefeller agreed to help launch a statewide capital campaign to enlarge the museum significantly and expand its programs, according to the Encyclopedia of Arkansas.

A gallery in the museum was named for Jeannette Rockefeller. But the museum is moving into a renovated and expanded building, which is scheduled to open in April.

Bartley said she received a letter on March 3, 2021, from current museum director Victoria Ramirez saying a plaque in the new museum would honor patrons who had named spaces in the former museum.

"We plan to honor your mother's previously named space with the following listing on this special plaque: Jeannette Edris Rockefeller," according to the letter from Ramirez.

"Her name on a plaque of patrons is not the same as the Jeannette Edris Rockefeller Permanent Collection Gallery," said Bartley. "I was appalled and waited one year and five months for an official communication righting this wrong."

On Sept. 13, Bartley wrote to Warren Stephens, chair of the Arkansas Museum of Fine Arts Foundation, to state how the letter from Ramirez "negated" her written agreement with Wolfe.

On Friday, Harriet and Warren Stephens, co-chairs of the museum's capital campaign, said they didn't know about Bartley's agreement with Wolfe. But for years, they said, there have been plans to have a gallery named for Jeannette Edris Rockefeller in the new museum.

Neither the Stephenses nor Ramirez could be reached for comment on Wednesday.

On Friday, Harriet Stephens said Ramirez's May 21, 2021, letter to Bartley was "a standard letter that Victoria sent to all the people who had named spaces in the old museum to tell them about that plaque." She said similar letters went to about 10 people.

Ramirez emailed the Arkansas Democrat-Gazette last week saying she was responding to questions in her capacity as Arkansas Museum of Fine Arts Foundation secretary.

"From the onset of the transformation of the Arkansas Arts Center into the Arkansas Museum of Fine Arts, we have been ever mindful of the significant contributions of its supporters," Ramirez wrote in the email. "This includes honoring the legacy of Jeanette Edris Rockefeller and her work on the Center's behalf in a featured named gallery, and on a special plaque, shared with others who had named spaces in the former building. The decision to honor Mrs. Rockefeller in the new space was made in 2020, and fully independent of any financial contribution."

Bartley said Wednesday someone forwarded her a letter that was sent on Dec. 2 to museum supporters indicating there would be a gallery named for her mother, and others, in the new museum.

"I was glad to learn that Warren and Harriet Stephens, in their Dec. 2 letter to AMFA supporters, that they are now very specific how they will honor my mother with an individually named gallery," said Bartley.

"Having gone through this experience, I am seriously questioning if the current members of the Foundation Board and the Museum Board can improve on their lack of performing to the best museum practices of governance, management, internal communication and transparency," she said. "Until I see evidence of such change, perhaps, at that future time, I may reconsider. ...

"This experience has shown me how inept they are," she said.

According to the museum's website, https://arkmfa.org, "The new Arkansas Museum of Fine Arts is being realized through a public-private partnership, starting with a $31 million commitment from the City of Little Rock generated by a hotel tax revenue bond. Contributions from generous private donors have more than quadrupled the public commitment -- and fundraising is ongoing.

Inside, the Harriet and Warren Stephens Galleries will encompass some 20,000 square feet of space, showcasing temporary exhibitions as well as the AMFA Foundation Collection.

The Windgate Art School will feature eight classroom studios and the Robyn and John Horn Gallery, according to the website. A 350-seat performing arts theater will host children's theatre productions, film screenings and concerts.

The museum will also have a 153-seat lecture hall named for Gov. Rockefeller.