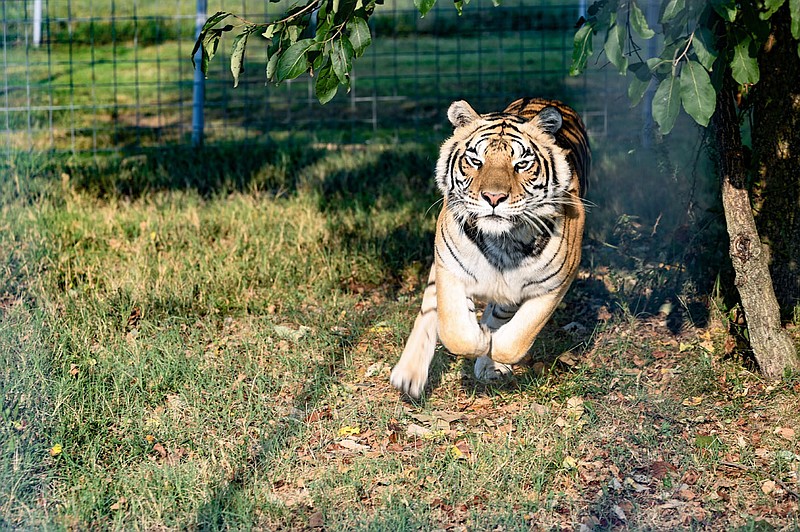 An Arkansas wildlife refuge is ready to help relocate animals after the U.S. Senate passed the Big Cat Public Safety Act on Tuesday by unanimous consent.

The measure would shut down cub-petting operations and prevent private individuals from owning lions, tigers, leopards, cheetahs, jaguars, cougars, or any hybrid of these species, as pets.

Current owners would be grandfathered in but would be required to register their animals; agree to not breed, acquire more or sell prohibited species; and not allow direct contact with the public. Private ownership would eventually be phased out.

Scott Smith, vice president of Turpentine Creek Wildlife Refuge in Eureka Springs, said there are between 5,000 and 10,000 privately owned big cats in the country now. He suspects a small percentage of the owners will give up their animals because of the new law.

Smith said Turpentine Creek currently has no space for new animals, but that will change.

Turpentine Creek is in the process of developing another 17 acres, which could accommodate 10 to 30 big cats, depending on how they're grouped. Smith said it will be 18 to 24 months before that space is ready.

Also, four to 10 of the refuge's animals die every year from old age or natural causes, he said. But that frees up space for newly rescued animals.

Turpentine Creek can also help relocate animals to other sanctuaries, said Smith. Turpentine Creek has three trucks and three trailers. The refuge can move 13 big cats at a time.

But people have six months after Jan. 1 to register their big cats, so the phone may not start ringing for a while, he said.

According to a news release from Turpentine Creek, "Passage of this legislation effectively ends the pay-for-play lucrative and exploitative cub-petting industry which is the primary driver behind the rampant overbreeding of exotic cats. Under the bill, public interaction with cubs -- including playing, swimming, feeding, or photos with -- would be prohibited. The cub-petting industry has generated a high demand for cubs. Cubs can only be used for a very short period before aging-out of the industry at three months, at which time they are sold into private ownership, become part of the breeding mill or are killed."

President Joe Biden has yet to sign the bill, but his administration has indicated that it supports the legislation.

"This bipartisan legislation would limit ownership of these animals to zoos, sanctuaries, universities, and agencies," according to a statement of administration policy issued July 26. "H.R. 263 would also prohibit direct contact between the public and any big cats in their possession."

Passage of the historic law is a huge victory, according to People for the Ethical Treatment of Animals.

"Once signed, the new law will ban private ownership of big cats and prohibit public contact with them, representing the final blow to the abusive big-cat cub-petting industry, which PETA had already virtually annihilated via our groundbreaking Endangered Species Act litigation," according to a post at https://www.peta.org.

"We must end the exploitative and dangerous trade in pet big cats, and ensure that no more cubs are ripped from their mothers at birth to be traumatized for profit," said Susan Millward, executive director of the Animal Welfare Institute in Washington, D.C.

The institute sent out a news release saying the Netflix docuseries "Tiger King" had heightened public attention to the exploitation of captive big cats. The House overwhelmingly passed the Big Cat Public Safety Act in 2020, but the Senate failed to take up the bill that year.

"For the past decade, we have been trying to get legislation passed to save the big cats in our great nation," said Smith. "We celebrate this victory with much gratitude to our supporters for their diligence in contacting their representatives and senators. The passage of the Big Cat Public Safety Act is a win for all big cats."

Turpentine Creek Wildlife Refuge has been rescuing abandoned, abused and neglected big cats for more than 30 years and has assisted in the placement of over 500 animals during that time, according to the news release.

"Since September of 2020, TCWR has brought in 21 big cats that were part of the Tiger King underground as major players in the breeding of big cats were closed through Department of Justice actions," according to the news release. "Big cats cost about $10,000 per year to care for and with the pay-for-play funnel drying up, all the big cats used for breeding to produce this steady supply of cubs have become large liabilities to their owners."

"Tigers can live into their early 20s in captivity," said Tanya Smith, president and co-founder of Turpentine Creek Wildlife Refuge. "Which means that in another 20 years or so there should be no more tigers or lions in our country that need sanctuary or need rescuing. In the meantime, we will need space to care for the ones already here, those born today and tomorrow, until this bill becomes law. We will need to expand our habitat space to accommodate the expected influx of animals as these roadside facilities close their doors.

"We are also expanding our education program to provide a Visitor Education Center and Museum where guests can learn about these animals in their natural environments, our care of them and how to help preserve a future for them," said Tanya Smith. "We have always expressed that education is our vision and goes hand in hand with our mission."