Marvell-Elaine district in line for annexation 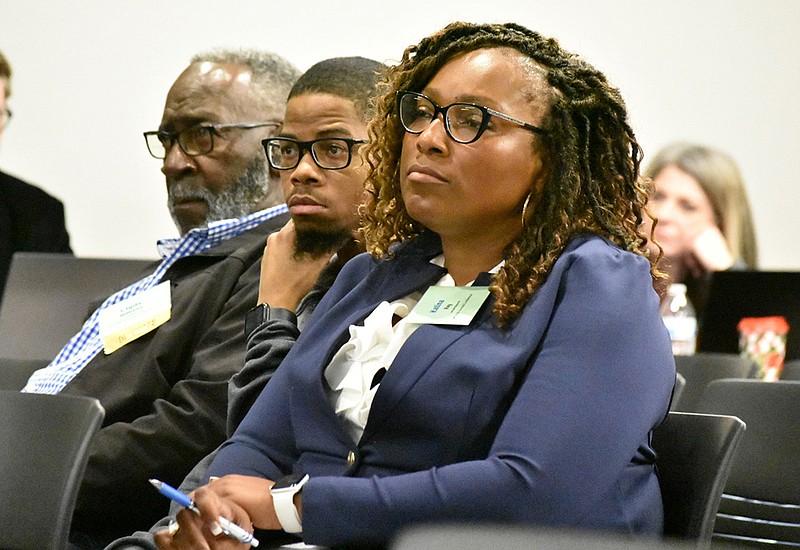 Marvell-Elaine School Board President Clyde Williams (from left), board member Justin Cox and Superintendent Katina Ray attend a a state Board of Education meeting Thursday in Little Rock on the fate of their district. (Pine Bluff Commercial/I.C. Murrell)

The Arkansas Board of Education on Thursday denied the Marvell-Elaine School District's request to operate with fewer than 350 students, putting the Phillips County district on a path to be annexed to one or more other districts in 2023.

The board voted 8-0 to deny the district's proposed enrollment waiver after a lengthy presentation by state leaders on inadequate staffing and poor quality instruction in the 302-student district that last month was classified as being Level 5/in need of intensive support.

Level 5/intensive support is the highest level of state-provided academic support to districts.

The Marvell-Elaine district will have until March 1 to identify a partner school district or school districts with which to consolidate, Arkansas Education Secretary Johnny Key said after the board vote. Ultimately, the state Education Board must either approve any proposed partnership offered by the district or select a different consolidation plan for Marvell-Elaine by May 1 of 2023.

Key said that consolidation of a school district does not automatically mean a campus will be shut down but possibly can continue to operate under the direction of the consolidated district.

Act 60 of 2002 set 350 as a minimum enrollment a district must have to be able to operate. As a result of that law, dozens of Arkansas school systems -- including the once separate Marvell and Elaine systems -- were merged with each other or with other districts.

A 2015 statute subsequently allows districts to qualify for a state Board of Education waiver of the minimum 350-student requirement if conditions regarding student achievement, finances and the condition of school facilities are met. If a district doesn't meet all of the conditions, the state Education Board has the discretion to grant a waiver or not.

"The consolidation of districts below the enrollment of 350 students has always been an emotional issue for communities," Key said in acknowledging the hard work and dedication that Marvell-Elaine community members have for the school system.

"But the overall conditions and student outcomes in the Marvell-Elaine schools are evidence that the district can no longer provide an adequate and equitable education for its students," he said. "It is therefore the responsibility of the state to take action to ensure students have access to an adequate and equitable education. Considering that responsibility, the state board's denial of the waiver request was necessary and appropriate."

Stacy Smith and Ivy Pfeffer, deputy commissioners in the Arkansas Division of Elementary and Secondary Education, detailed for the Education Board what they described as an "insurmountable challenge" of staffing in the Marvell-Elaine system and the district's inability to sustain the cost of contracting with vendors for instruction and other services.

They told the board that the waiver of the 350-student minimum to preserve the Marvell-Elaine district would not be in the best interest of students, that students are not receiving the adequate and equitable education needed.

Pfeffer noted that most of the secondary school faculty members are virtual teachers, and that teachers without state licenses are teaching a majority of the elementary school pupils. Only two teachers assigned to kindergarten through sixth grade classes are licensed.

Pfeffer also said the district, which has a 25% employee turnover rate, either did not at all or only recently enrolled the non-licensed teachers into programs to become licensed.

Smith, who heads the state's Office of Coordinated Support and Services for aiding struggling districts, said the literacy instruction she observed was the poorest she has seen in her experience of frequently visiting academically struggling schools.

In multiple classrooms, Smith said, she saw students who were not where they should be in terms of achievement and their instruction was not sufficient to close the gap. She said she observed teachers whom she, as a principal, would place on an action plan to improve or not have them work in her school.

Smith said the district's curriculum is not a problem, but she had concerns about how it is being implemented. She said student achievement on the state-required Aspire exams in math and English literacy is well below state averages and declined between 2021 and 2022. She said the average ACT college entrance exam score for the school was 14 compared to the state average of 18.3 on a scale of 1 to 36. About 30% of graduates attend college and 100% required remediation while there.

Problems at the school have existed over time and the state has provided support, Smith said, noting that she sent her top staff members to train and otherwise provide intensive support in the district but in some cases had "pushback" from district faculty last year. Smith said she reassigned staff to respond to that.

State Education Board member Jeff Wood questioned the prospects of improvement for Marvell-Elaine if it is consolidated with other districts.

Key said that some of the nearby districts struggle and the state has worked to support them. But he also said that conditions in those districts are better and that the Marvell-Elaine students will benefit even if they have 30 minute or more bus rides to get to another campus.

Earlier Thursday, the board granted waivers of the minimum 350-student enrollment requirement to the Guy-Perkins, Augusta, Shirley, Strong-Huttig and Western Yell County districts. Unlike the Marvell-Elaine district, none of those districts are classified as needing Level 5/intensive support.

They also met other criteria set in a 2015 state law to qualify for the waiver. Those criteria allow a waiver of the enrollment minimum if a district is not in fiscal or facility distress, meets state accreditation standards for schools and the school board has passed a resolution saying that a waiver is in the best interest of students in regard to transportation that would otherwise be required to attend a different campus.