Oaklawn kicks off with Tribe backing 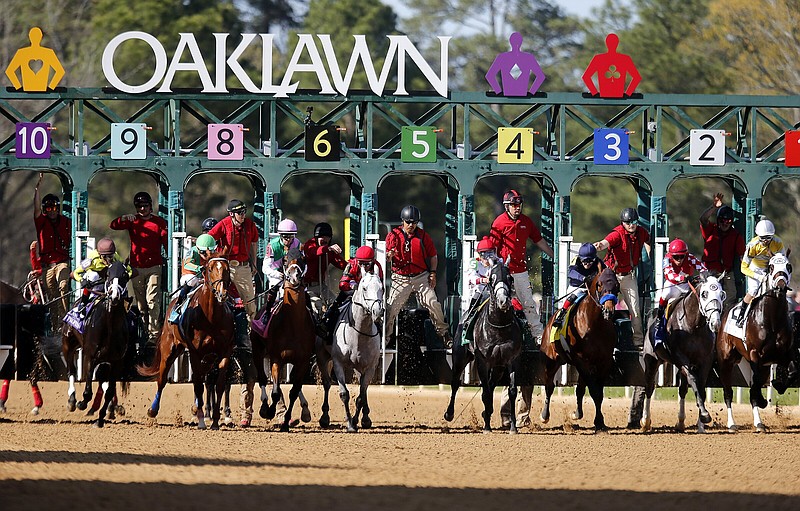 Opening day itself for Oaklawn's 68-day meet is today, and it features the $150,000 5 1/2-furlong Advent Stakes for 2-year-old horses. It includes an Iowa-bred sensation named Tyler's Tribe.

Trainer Tim Martin's and Tom Lepic's Tyler's Tribe, the 3-5 morning-line Advent favorite, is named for an 8-year-old leukemia survivor named Tyler Juhl, who, with his tribe of family and friends on hand, rang a bell on the grounds of the University of Iowa Hospital on Oct. 24 to symbolize his cancer-free status after a two-year fight.

Lepic, 69, is Tyler's grandfather, and he, his fellow tribe members, and Tyler's Tribe were among the brightest stories of the Breeders' Cup early last month at Keeneland Race Course in Lexington, Ky.

"We feel so blessed for what we've gotten in kindness from all over the country," Lepic said. "At the Breeders' Cup, we were treated like royalty there. It was really something, but best of all, we have this young man who is cancer free. We had hundreds of people from Iowa go to the Breeders' Cup just for the support."

Undefeated in five previous runaway starts, Tyler's Tribe bled on the lead of the $1 million Breeders' Cup Juvenile Turf Sprint, and his 20-year-old rider Kylee Jordan pulled him up for a trot to the wire.

"Breaking out of the gate, he had so much speed for the first 200, 300 yards," said Jordan, who rode eight winners at Oaklawn last season. "He was just cruising, and then he bled obviously, and I just eased him up."

Followers of the tale of Tyler's Tribe will see the start of its second chapter at Oaklawn, with many of his tribe in attendance.

"When people are fortunate to overcome such heartbreak and difficulties, that's what life is about," Oaklawn President Louis Cella said. "When you have the Advent race at Christmas time with great stories, it's not just horse racing. It transcends horse racing. It brings a tear to the eye."

Eight others are entered in the Advent, including Happy Is a Choice, second on the morning line at 9-2. Owned by Hooties Racing, Wss Racing, and 4G Racing, the son of Runhappy and maternal grandson of Afleet Alex is trained by John Ortiz. David Cabrera is listed to ride Happy Is a Choice.

After a long look at the as-yet nameless yearling, Lepic called Martin, his longtime partner and Oaklawn regular.

Tyler's Tribe, with five wins in six starts, is set to start the Advent with earnings of $306,294. His connections said they were marveled as he progressed through his five starts at Prairie Meadows in Altoona, Iowa.

"He is way above all the others I've trained," said Martin, a native of Hardy but long a Hot Springs resident. "He's way over the top. Other than the Breeders' Cup, this horse has been the class. He hasn't just beaten them. He's beaten them [easily], and I hope the Advent's the same way. I think he's going to run big. Every time he runs, he's just way the best."

After Tyler's Tribe's opening-day sprint at Oaklawn, his connections sound confident he can go long. Thoughts of a Kentucky Derby pursuit are within their mindsets.

"I want to make sure this horse is good after the race, but we might try to bring him back for [the Grade III 1 1/16-mile Southwest Stakes on Jan. 28] if he takes us there," Martin said. "I really, really think he can stretch out."

Cella agreed that as head of Oaklawn management he cannot cheer for particular horses. At least not aloud. As for Tyler's Tribe, perhaps another way will suffice for many.

"In your heart," Cella said.