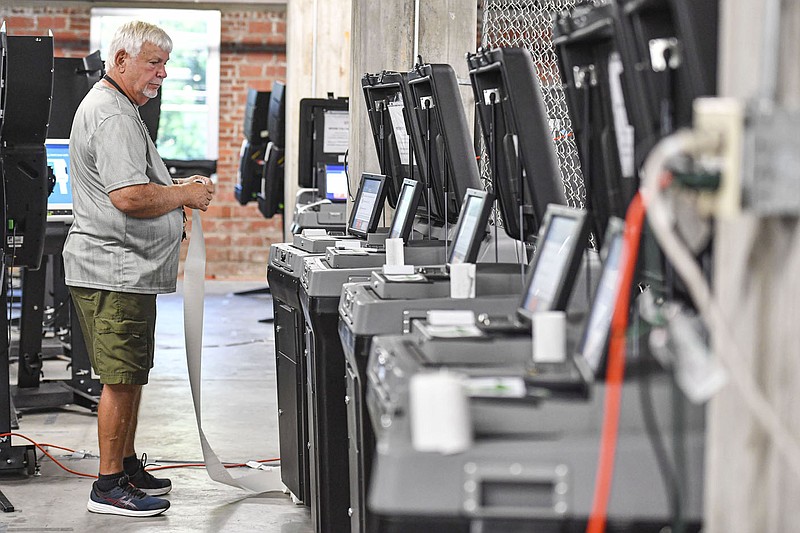 Conrad Reynolds, a retired U.S. Army colonel and leader of a group called Arkansas Voter Integrity Initiative Inc., filed the lawsuit Monday in Pulaski County against Secretary of State John Thurston, the State Board of Election Commissioners, and Election Systems and Software (ES&S).

The lawsuit contends that “the voting machines currently approved by the Secretary of State and the State Board of Election Commissioners fail to comply with state law.”

The lawsuit, which was assigned to Judge Tim Fox on the 6th Judicial Circuit, urges the court to rule that the ExpressVote and DS200 voting machines used by the state “do not comply with Arkansas law because the voter cannot independently verify the votes selected by the voter on the ballot prior to being cast by the voter as the ordinary and common voter cannot read bar codes.”

According to the lawsuit, voters mark their ballots using ExpressVote, which prints a ballot summary card that includes a bar code at the top “allegedly encoding the voter’s selected candidates and/ or issues.” The summary card is fed into the DS200, which tabulates the votes by reading the bar code.

Because “most ordinary and common voters cannot read a bar code,” the lawsuit contends, the state law requiring that the voter be able to verify their vote is not met.

Reynolds, a Republican, lost in the party’s primary election in May to incumbent Rep. French Hill. He also lost to Hill in the 2014 Republican primary.

Reynolds of Conway said in a press release his lawsuit has nothing to do with the results of his failed bid for office, but is about “having an election process in place that citizens can trust.”

He is represented by Clint Lancaster, a Republican election commissioner in Saline County.

“This lawsuit will restore confidence in the electorate and bring back transparency to the voting process,” Lancaster said in the release. “Our firm is excited about the future and to represent an organization that is not afraid to fight for the citizens of Arkansas.”

Chris Powell with the secretary of state’s office sent a one-line emailed response to the lawsuit. “Due to pending litigation, we would not have a comment at this time,” it read.

The lawsuit is the latest in a slew of election lawsuits filed nationwide against those who run elections and voting machine companies like Election Systems and Software, which is based in Omaha, Neb.

A similar lawsuit was filed three weeks ago in Nebraska against its secretary of state, election commissioners in all 93 counties and Election Systems and Software.

The plaintiff claimed that all the defendants were “secretly corrupting the election process” in the service of “godless vigilantes whose only purpose in life is to serve themselves and evil.”

In its press release, Reynolds said ES&S had “been criticized for its lack of transparency regarding ownership and for its apparent inclusion of Chinese parts” in its machines.

“I’m doing this for every American, regardless of party affiliation or political leanings,” said Reynolds. “I’ve been to over 70 countries and I have seen what happens in countries that lose faith in their election process. Over half of Americans don’t trust the current system so why not move to an election process that all Americans can have trust in?”