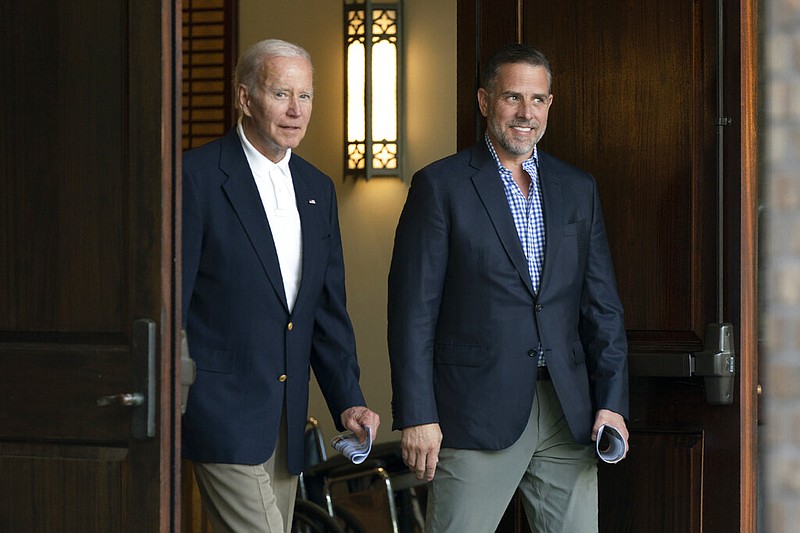 President Joe Biden and his son, Hunter Biden, leave Holy Spirit Catholic Church in Johns Island, S.C., in this Aug. 13, 2022 file photo. The president and his son had just attended a Mass during a vacation with his family on Kiawah Island. (AP/Manuel Balce Ceneta)

The Arkansas woman who gave birth to a baby fathered by Hunter Biden has requested that a court change the young girl's last name to Biden.

The motion, filed by the attorney for Lunden Alexis Roberts, was made Tuesday in the 16th Circuit Court in Independence County in the paternity case against Hunter Biden.

It was one of four filings made in the case that was originally settled in March 2020. The case was reopened in September when Biden, the son of President Joe Biden, filed a motion to have his child support payments adjusted due to "substantial material change" in his "financial circumstances, including but not limited to his income."

According to the filing submitted Tuesday by attorney Clinton Lancaster, the baby would "benefit from carrying the Biden family name," and that the "Biden name is now synonymous with being well educated, successful, financially acute, and politically powerful."

It says the Biden family remains "estranged from the child. To the extent this is misconduct or neglect, it can be rectified by changing her last name to Biden so that she may undeniably be known to the world as the child of the defendant and member of the prestigious Biden family."

Roberts, originally from Batesville and an Arkansas State University graduate, met Hunter Biden while she was living in Washington, D.C., and worked for him, Lancaster previously said.

The child, initially referred to in the case as "Baby Doe," was born in August 2018; the paternity suit followed in May 2019, days after Hunter Biden's marriage to a South African filmmaker, the former Melissa Cohen.

A DNA test showed, "with near scientific certainty," that Biden is Baby Doe's father, Judge Holly Meyer declared in a January 2020 order. That month the parties agreed on temporary child support until the issue was resolved.

In March 2020, Hunter Biden and Roberts reached an agreement to settle their paternity and child-support suit.

In his 2021 book "Beautiful Things," Hunter Biden claimed he fought Roberts' paternity suit because he had no memory of the incident that led to the pregnancy.

The book chronicles his struggles with alcohol and drug abuse, which intensified after the death of his brother in May 2015 and after his divorce was finalized in two years later.

"The other women I'd been with during rampages since my divorce were hardly the dating type. We would satisfy our immediate needs and little else," Hunter Biden wrote, adding, "I'm not proud of it."

The rest of the filings on Roberts' behalf involve motions related to Hunter Biden's request to adjust his child support payments and the discovery process into his finances and income.

One filing, stating that Hunter Biden's motion should be denied, says he "has a long, and lengthy, history of attempting to avoid discovery by filing endless and recurrent motions for protective orders. Additionally, this case was finally resolved the first time when this court denied the defendant's motion for a protective order relating to discovery."

It asserts that Hunter Biden is "attempting to stifle discovery into his financial affairs while simultaneously reducing his child support obligation on the claim that he now earns less income."

Roberts has asked for a list of all of Hunter Biden's residences for the past 10 years and vehicles he's owned or driven for the last five years. Roberts is seeking to obtain evidence of the Biden's "well-established history of a lavish lifestyle.

"[Biden] objects and refuses to provide all the requested information. Instead, [Biden] seeks a protective order."

"This information is relevant to determine if, as Federal authorities insinuated, the defendant failed to disclose all his income as this goes to earning capability and Mr. Biden's credibility."

Other requests by Roberts included those for information about: any financial benefits Hunter Biden or other family members receive as a result of Joe Biden's presidency; a California attorney named Kevin Morris who is alleged to have paid millions on Hunter Biden's behalf; information on any money paid to or by Hunter Biden's attorney, Brent Langdon; money paid to or by James Biden [President Biden's brother] and President Biden.

"The plaintiff is relegated to proving her case related to child support by documents," the filing said.

"Mr. Biden cannot pick and choose which documents he will disclose -- to do so is to limit the plaintiff to the blind faith of what the defendant said he made as income."

Hunter Biden's motion for the protective order was filed under seal.

Lancaster filed a motion to have it unsealed, saying it was "improperly sealed."

Lancaster requested that Meyer "order the defendant to stop improperly filing documents as sealed" and "award the plaintiff her attorney's fees for having to file this motion because of the defendant's second violation of the court's orders."

Another filing by Lancaster asked the court to dismiss Hunter Biden's protective order motion due to its containing a hyperlink, which is "prohibited by Ark. Sup. Ct. Admin. Order No. 21, § 9, which plainly and expressly states that 'electronic documents shall be self-contained and shall not contain hyperlinks to external papers or websites.'"

Information for this report was provided by Frank Lockwood of the Arkansas Democrat-Gazette.