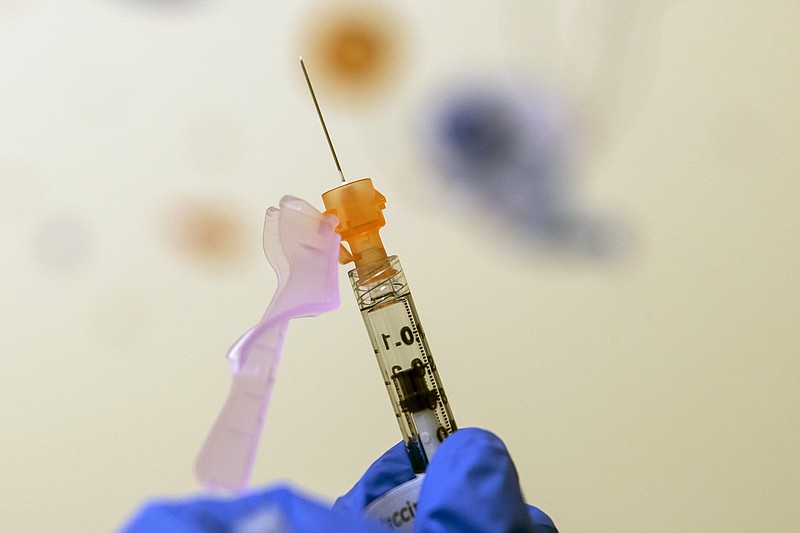 FILE - Nurse Lydia Holly prepares a child's COVID-19 vaccine dose, on Nov. 3, 2021, at Children's National Hospital in Washington. U.S. regulators are urging drugmaker Pfizer to apply for emergency authorization for a two-dose regimen of its COVID-19 vaccine for children ages 5 and under while awaiting data on a three-dose course, aiming to clear the way for the shots as soon as late February. (AP Photo/Carolyn Kaster, File)

WASHINGTON -- Pfizer on Tuesday asked the U.S. to authorize extra-low doses of its covid-19 vaccine for children younger than 5, potentially opening the way for the very youngest Americans to start receiving shots as soon as March.

In an extraordinary move, the Food and Drug Administration had urged Pfizer and its partner BioNTech to apply earlier than they had planned -- and before it's settled whether the youngsters will need two shots or three.

Meanwhile, U.S. hospital admissions are receding in 34 states and the nation's capital, easing the health care staffing crises that were widespread at the start of the year.

The nation's 19 million children under 5 are the only group not yet eligible for vaccination against the coronavirus. Many parents have been pushing for an expansion of shots to toddlers and preschoolers, especially as the omicron variant sent record numbers of youngsters to the hospital.

[Video not showing up above? Click here to watch » arkansasonline.com/22pfizer/]

"I would say the parents in my office are desperate" to get young kids vaccinated, said Dr. Dyan Hes, who runs a pediatrics practice in New York City, where vaccination rates are high. For many, "that's the first thing they ask when they walk through the door: 'When do you think the shot is going to come out?'"

Pfizer aims to give shots that contain one-tenth of the dose given to adults to children as young as 6 months. It said it had started submitting its data to the FDA and expects to complete the process in a few days.

An open question is how many shots those children will need. Two of the extra-low doses turned out to be strong enough for babies but not for preschoolers in early testing. Pfizer now is testing a third shot, with data expected in late March.

That means the FDA may consider whether to authorize two shots for now, with potentially a third one being cleared later if the study supports it.

Pfizer CEO Albert Bourla said in a statement that company scientists believe this age group ultimately will need three of the extra-low-dose shots but that FDA action now could let parents begin the vaccination process while awaiting a final decision.

The FDA said it will convene a panel of independent researchers and physicians in mid-February to help review the Pfizer data. The agency isn't required to follow their advice, but the input is a key step in publicly vetting vaccine safety and effectiveness.

The question of how long to wait for new vaccine data -- and how much to require -- is a concern for FDA regulators, who face pressure to be more proactive against a virus that has repeatedly confounded health experts.

The FDA asked Pfizer to begin submitting its application now because of omicron's "greater toll on children," an agency spokeswoman said, citing a peak in cases among children younger than 5.

"In light of these new data and the rise in illnesses and hospitalization in this youngest age group, FDA believed that it was prudent to request that Pfizer submit the data it had available," agency spokeswoman Stephanie Caccomo said in a statement.

The FDA's ultimate decision could come within the month, but that isn't the only hurdle. The Centers for Disease Control and Prevention also has to sign off.

The Biden administration has been trying to speed the authorization of shots for children, contending vaccinations are critical for opening schools and day care centers and keeping them open, and for freeing up parents from child care duties so they can go back to work.

Yet vaccination rates have been lower among children than in other age groups. As of last week, just 20% of kids 5 to 11 and just over half of 12- to 17-year-olds were fully vaccinated, according to the American Academy of Pediatrics. Nearly three-quarters of adults are fully vaccinated.

Young children are far less likely than adults to get severely ill from the coronavirus, but it can happen, and pediatric infections are higher than at any other point in the pandemic.

"What we're seeing right now is still a lot of hospitalizations and unfortunately some deaths in this age group," said Dr. Sean O'Leary of the University of Colorado, who is on the pediatrics academy's infectious disease committee. If the FDA clears vaccinations for these youngsters, "that's going to be really important because all of those hospitalizations and deaths essentially are preventable."

For kids younger that 5, Pfizer's study is giving participants two shots three weeks apart, followed by a third dose at least two months later. The company is testing whether the youngsters produce antibody levels similar to those known to protect teens and young adults.

In December, Pfizer announced that children under 2 looked to be protected but that the antibody response was too low in 2- to 4-year-olds. It's not clear why, but one possibility is that the extra-low dose was a little too low for the preschoolers.

Since the preliminary results showed the shots were safe, Pfizer added a third dose to the testing in hopes of improving protection.

A Kaiser Family Foundation poll found that just 3 in 10 parents of children younger than 5 would get their youngster vaccinated as soon as shots were authorized, while about a quarter said they definitely would not. Results of the survey of 1,536 adults, conducted in mid-January, were released Tuesday.

Chicago health officials have been trying to prepare parents for months for the day the shots are available, said Dr. Nimmi Rajagopal, a family medicine physician for Cook County Health, which oversees the public hospital system. Some parents wonder how rigorously the shots will be evaluated or have other questions that she said are critical to address.

Rajagopal is excited about getting her own 2-year-old son vaccinated if the FDA clears the way, so it will be safer for him to play with other children.

In the past week, the number of new covid-19 patients has dropped 31% in New Jersey and Maryland, the biggest declines in the country, according to data from the U.S. Department of Health and Human Services. In Washington, D.C., Connecticut and New York, hospital admissions declined 26%.

The omicron variant swept across the U.S. through much of December and early January, sending cases to a weekly peak more than three times as bad as the previous worst period, last winter. That meant hospitals got overwhelmed yet again, even with a variant less virulent for the average person.

Omicron moved so quickly that it began to burn out much quicker than previous variants, as it did in South Africa and parts of Europe.

Even among states hit later with omicron, conditions may soon improve. Oregon, Wyoming and Alaska are reporting the country's largest increases in new hospital admissions, each up about 15% from the previous seven-day period.

But cases that tend to lead hospital admissions are showing signs of peaking in those places. Emergency-room visits, another leading indicator of admissions, also appeared to have crested in those areas.

Nationally, that has all meant a sharp recovery for health-care facilities, which were reporting widespread critical staffing shortages as recently as early January -- a reflection not only of the number of new covid-19 patients, but also of an exhausted workforce, many of whom caught omicron themselves.

Since Jan. 9, the number of health care facilities reporting critical staffing shortages has plummeted to the lowest since Aug. 14.

None of that means the omicron story is over for America's doctors and nurses. The situation still looks dire in intensive-care units. It can take days or even weeks for a covid infection to lead to an ICU admission, so the trend typically lags other data that focuses on infections.

ICU occupancy may now be cresting nationally after reaching a level nearly as bad as the winter of 2020-21.

In New York, Gov. Kathy Hochul said Monday that the federal government was deploying military medical teams to upstate hospitals, part of a trend as omicron works its way through rural parts of many states.

Now the country will wait to see what the next season brings. It has been through several hopeful lulls after surges, including after last winter's. But serious surges have tended to occur at least every six months -- with a few smaller regional outbreaks in between.

Vaccinations will help. The latest data from December shows that unvaccinated seniors were about 52 times more likely to be hospitalized with covid-19 than their vaccinated and boosted peers, according to COVID-Net, a surveillance network made up of 99 counties in 14 states. Scientists also expect new therapeutics will make future outbreaks or surges more manageable.

Meanwhile, the World Health Organization chief said Tuesday that 90 million cases of coronavirus have been reported since the omicron variant was identified 10 weeks ago -- more than in all of 2020, the first year of the pandemic.

With many countries easing their restrictive measures amid public fatigue, WHO Director-General Tedros Adhanom Ghebreyeus cautioned that omicron should not be underestimated, citing "a very worrying increase in deaths in most regions of the world."

"We are concerned that a narrative has taken hold in some countries that because of vaccines -- and because of omicron's high transmissibility and lower severity -- preventing transmission is no longer possible and no longer necessary," he said at a WHO briefing on the pandemic.

"Nothing could be further from the truth," Tedros said. "It's premature for any country either to surrender or to declare victory. This virus is dangerous and it continues to evolve before our very eyes."

WHO said four of its six regions worldwide are seeing increasing deaths.

Many European countries have begun easing lockdown measures, including Britain, France, Ireland and the Netherlands. Finland will end its restrictions this month.

On Tuesday, Denmark's government scrapped most restrictions, saying it no longer considers covid-19 "a socially critical disease." The nation of 5.8 million has in recent weeks seen more than 50,000 new cases a day, but the number of patients in intensive-care units has declined.

Dr. Michael Ryan, WHO's emergencies chief, said countries with higher vaccination rates "have more choices" on easing restrictions, but said they should assess factors such as their current epidemiology, at-risk populations, immunity in the population and access to health care tools to fight the pandemic.

"Every country has to find its feet, know where it is, know where it wants to go, and chart its path ... You can look at what other countries are doing. But please don't just follow blindly what every other country is doing," Ryan said.

Van Kerkhove also said a group of experts looking into the emergence of new pathogens such as the coronavirus -- and assessing its origins -- is expected to issue a report "in the coming weeks."

Among other things, the group is examining early epidemiological studies and "our current understanding of the origins of this particular pandemic, building upon previous missions that have gone to China and worked with Chinese scientists," Van Kerkhove said.

Information for this article was contributed by Lauran Neergaard, Matthew Perrone, Emma H. Tobin, Mike Stobbe and Jamey Keaten of The Associated Press; and by Jonathan Levin of Bloomberg News (TNS).