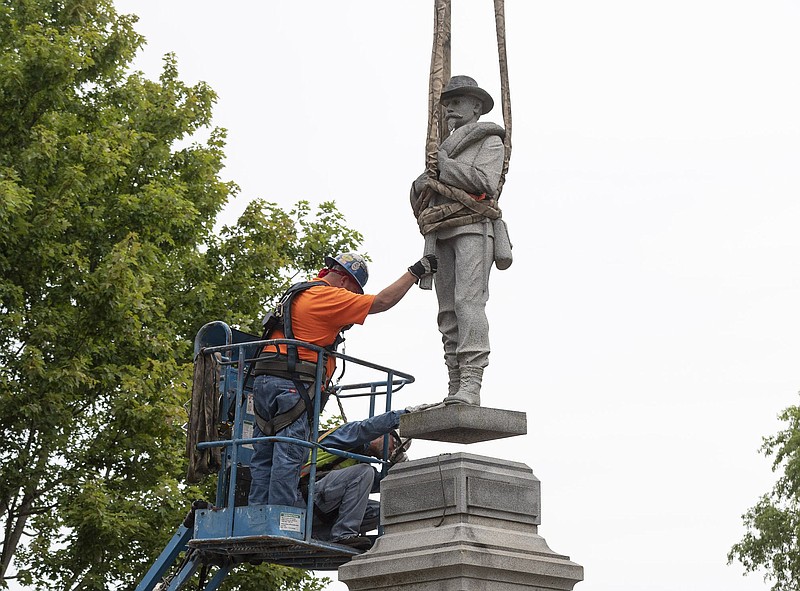 BENTONVILLE -- The Confederate monument that will be the centerpiece of James H. Berry Park has drawn criticism from The Council on American-Islamic Relations.

The city Planning Commission on Tuesday approved the privately owned park's development by a unanimous 6-0 vote with one commissioner absent.

The Council on American-Islamic Relations is the nation's largest Muslim civil rights and advocacy organization, according to a news release.

"Honoring traitors who supported white supremacy and slavery with public monuments is completely unacceptable and we urge the city of Bentonville to cancel its plans to do so," CAIR national communications coordinator Ismail Allison said in the release. "We call on cities nationwide to rid themselves of all symbols of racist hate."

Allison also noted in the release the organization repeatedly has called for removing Confederate flags, statues and symbols from public spaces nationwide.

Joey McCutchen, who represents the Arkansas United Daughters of the Confederacy, pushed back against the claim. The group owns the statue.

"CAIR has obviously chosen to ignore and distort basic facts and history in advancing their single-minded narrative that history that they do not like must be cancelled, removed, revised, sanitized or erased," he said. "We disagree. We believe we should learn from our history and use it as an educational moment. Celebrate that we have come a long way from the days of slavery and other evils and understand we still have a long way to go. If we don't learn from our history, we are destined to repeat it."

James H. Berry Park isn't city-owned. The city has no connection to the park except for its approval, a city official said.

"This is not a city of Bentonville project or park. It is a private project and private park," said Debbie Griffin, city director of administration. "The Planning Commission can only, and did only, make sure the project was adhering to city code."

The park is on private land and is privately funded. The site is 0.44 acre and is zoned general commercial, according to planning documents.

The Benton County Historical Society owns the park, which will be open to the public.

James H. Berry Park will be at the southwest corner of Southwest Fifth and Southwest F streets and it will include the Confederate statue that was removed from the downtown square in September 2020.

The park will be adjacent to the Bentonville Cemetery. A groundbreaking will be held in early March, it was announced in January.

The monument stood on the square from 1908 until it was removed. It's stored in an undisclosed location to be cleaned and restored, according to a January news release from McCutchen.

The monument has been listed on the National Register of Historic Places since 1996. It's the first Confederate monument to be moved and remain on the register, McCutchen said.

The park design phase is nearing completion, and construction will begin soon, according to the release. Designs for the park were unveiled in September 2020.

The monument, which consists of a pedestal and a statue of a bearded Confederate soldier, was on property owned by Benton County on the downtown square. The city maintained the property, including beautification.

A feature in Berry Park will be the Benton County Wall of Honor that will include the names of Benton County soldiers, Confederate and Union, who died during the war.

"The park will tell the story, by giving factually researched data, of what happened in Bentonville and Benton County during that era of our history," McCutchen said. "In that sense, it is a private, local Benton County park focusing on Benton County history during the Civil War period, but open to all."

Far from being a "traitor," Berry was an honorable Arkansan who served as a Confederate officer, teacher and lawyer, McCutchen said.

Berry was a Civil War officer, lawyer, Arkansas legislator, speaker of the state House of Representatives and circuit judge for the 4th Judicial District. He was elected Arkansas' 14th governor, then served as a U.S. senator from 1885 to 1907, according to the Encyclopedia of Arkansas.

Since the Charleston, S.C., church massacre in 2015, activists have renamed, moved and removed 377 Confederate memorials from communities across the United States, according to the Southern Poverty Law Center.

The top three individuals commemorated are Robert E. Lee, Jefferson Davis and Stonewall Jackson, according to the center.