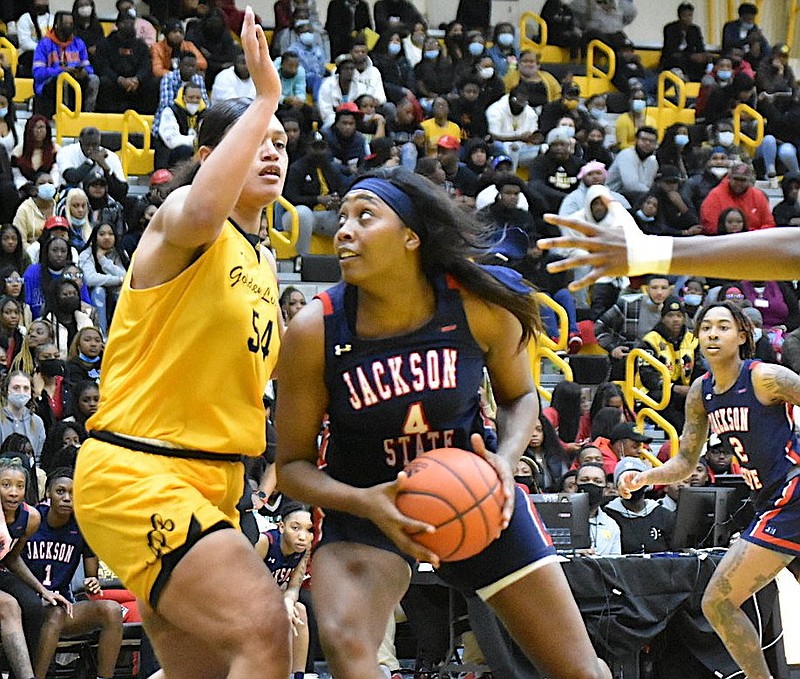 Ameshya Williams-Holliday of Jackson State maneuvers against Maya Peat of UAPB in the paint in the second half Monday, Feb. 7, 2022, at H.O. Clemmons Arena. (Pine Bluff Commercial/I.C. Murrell)

Using a smaller lineup for much of the game with three injured players out, the task didn't seem too big for the University of Arkansas at Pine Bluff women's basketball team. It was just that Jackson State University is really good.

Reigning SWAC Player of the Week Ameshya Williams-Holliday registered her 10th straight double-double of the season, and the Tigers held UAPB scoreless in the final 2:56 to take a 69-55 win on Greek Night Monday at H.O. Clemmons Arena.

"That's the engine of the team," said UAPB guard Kaila Walker, who had 15 points in her second straight start. "That's the heart of the team. Once you take her away, you have a better chance than with her in the game."

The 6-foot-4 Williams-Holliday chalked up 17 points and 13 rebounds, Dayzsha Rogan had 15 points, Ti'lan Boler scored 14 points, and Daja Woodard totaled 10 for the Tigers (13-6, 11-0 Southwestern Athletic Conference), who went into the game with a two-game lead over Southern University and four-game lead over five other teams including the Lady Lions (10-11, 6-5).

UAPB's Zaay Green led all scorers with 19 points and 11 rebounds.

The Lady Lions, who had won two straight, were missing point guard Joyce Kennerson and posts Khadijah Brown and Tyeisha Juhan, all due to knee injuries. Coach Dawn Thornton said their statuses are day-by-day.

"I feel like all of us had to step up," Walker said. "I felt my team needed me, and this was the time to play, and I came out to play against the No. 1 team."

Green and Walker carried a smaller-than-usual lineup against a Jackson State team that has eight players 6 feet or taller on its roster. Walker sparked the guard-oriented lineup to a 10-0 run into the second quarter, as the Lady Lions led by as many as 6 points and held a 26-24 halftime lead.

"Trying to mix up the defense, we had to go zone, we had to go small and put Stephanie Okowi in there to run with the big dogs a little bit," Thornton said. "I thought she held it down as much as she possibly could."

Williams-Holliday, who last played at Mississippi State University, has double-doubled in all but 5 games this season. She scored 4 of the Tigers' first 9 points of the third quarter, helping them take a 33-30 lead with 5:25 remaining. Takaylyn Busby tied it with a 3-ball at the 4:42 mark.

"That's great defense for them," Thornton said. "Jackson State is a great defensive team. I thought the officiating got us out of sync a little bit, too. A lot of those calls resulted in some emotions for us, as opposed to us staying focused on the job at hand."

Green earned a double-double despite shooting 8 for 24 from the floor and missing all eight 3-point attempts. She also went 3 for 9 from the free-throw line.

She fouled out with 2.7 seconds left after colliding with Jackson State guard Ja Covington and picked up a technical foul in frustration.

"We hadn't been in a situation to play a team this good," Thornton said. "They've been averaging beating teams in the conference by 30. So only being down 13 with less than 20 seconds to play is something we're going to build off and we're going to continue to move forward."

UAPB picked its fourth foul of the third quarter at the 6:15 mark. Jackson State had no fouls. Both teams, however, finished with 21 fouls, as Jackson State's Miya Crump and Green fouled out.

UAPB will visit Alabama State University on Saturday. Tipoff in Montgomery is scheduled for 2 p.m. 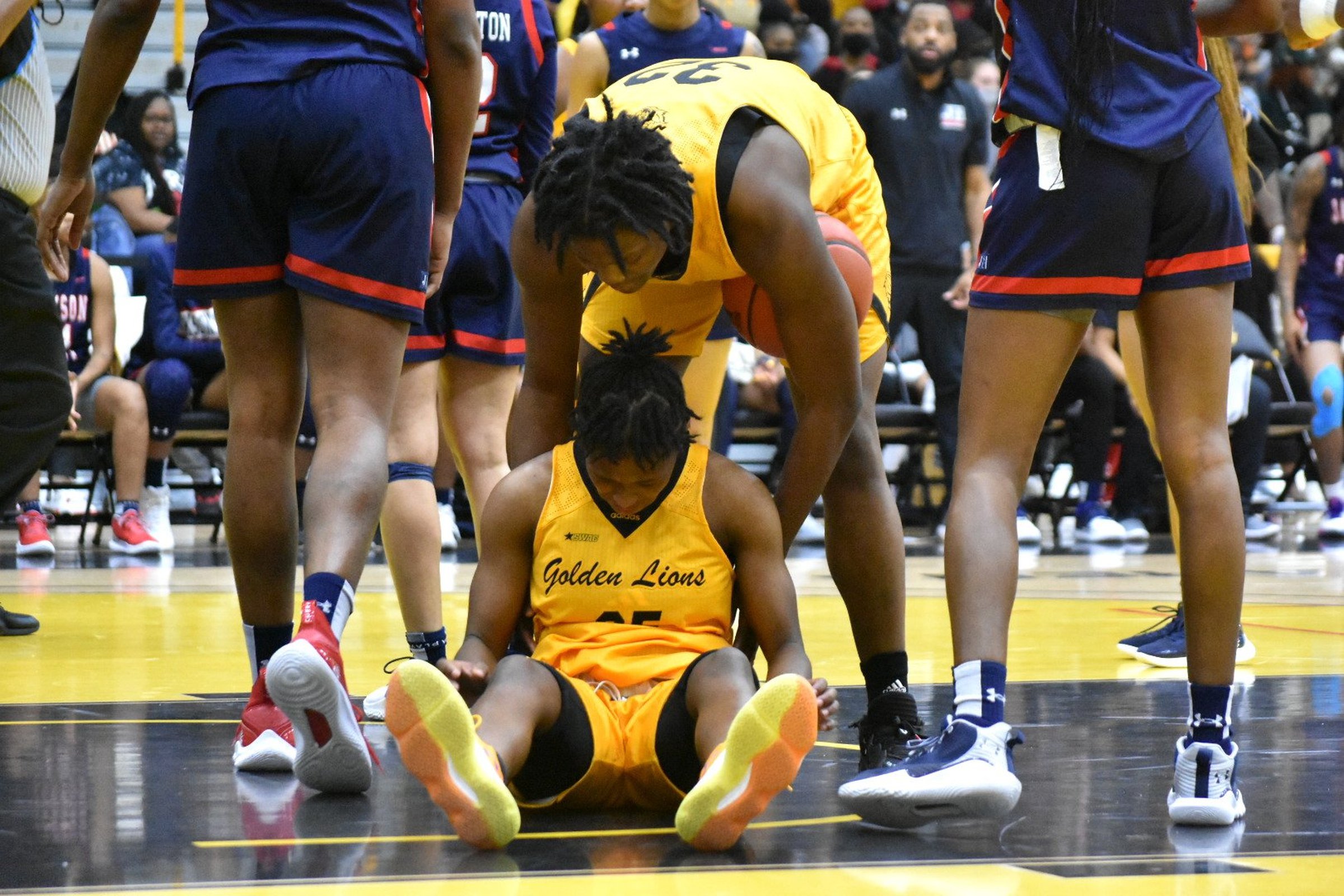 Kaila Walker of UAPB is helped up by Stephanie Okowi after being fouled against Jackson State in the first half Monday, Feb. 7, 2022, at H.O. Clemmons Arena. (Pine Bluff Commercial/I.C. Murrell)