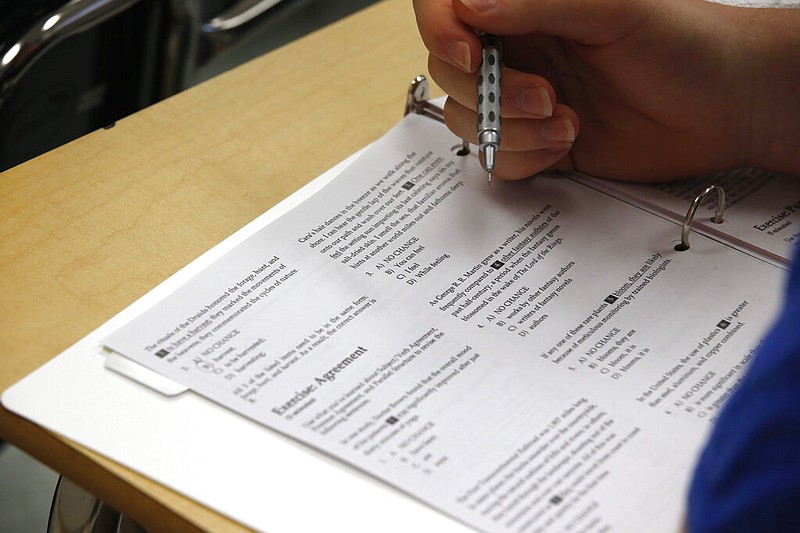 A student looks at questions during a preparation class for a standardized test in this Jan. 17, 2016, file photo. (AP/Alex Brandon)

A total of 111 Arkansas schools, or 1 in 10, did not give ACT Aspire exams last spring to at least 95% of students who were supposed to take state- and federally-required, end-of-year tests in math and literacy.

The Arkansas Board of Education on Thursday granted those schools -- including 16 in the Little Rock School District, six in the Pulaski County Special School District, nine in West Memphis and seven in Fayetteville -- a one-year waiver of the state accreditation standards that require the 95% minimum student test rate.

Deborah Coffman, the Arkansas Division of Elementary and Secondary Education's assistant commissioner for public school accountability, presented the waiver request, saying that it was because of the covid-19 pandemic that affected school operations nationwide last school year.

"This is a blip in the road," Coffman said of the 111 that are in 55 school districts, adding that overall schools in the state were "amazing" in accomplishing the Aspire testing and "we have so much to be thankful for."

Most other states did not test at all in 2020-21 and were not able to enact their school accountability systems, she said.

Coffman emphasized to the state board that the newly approved waiver applies to the state requirement. Schools continue, she said, to be subject to federal requirements. That means they were dinged for their lower testing percentages in the calculation of their school accountability scores.

Those Every Student Succeeds Act index scores for schools were released last October based on the spring ACT Aspire results.

The school accountability scores rely heavily on the Aspire results but also take into account high school graduation rates and college entrance exam results if applicable to a school, progress by students who are English language learners, and indicators of school quality and student success. Those quality and success indicators include student attendance, science achievement and gains, numbers of students reading at their grade level, and community service by students.

In addition to the downward adjustments to the index scores, schools are now on notice that a second year of insufficient testing numbers will carry additional consequences. Schools that fall below the 95% minimum in two consecutive years will be required by the state's federally approved school accountability system to develop a plan for increasing their numbers of tested students, Coffman said.

No schools are currently in a second year of violation because the state had a federal waiver of the testing requirement in the spring of 2020. That was when schools nationwide were shut down to on-site instruction in an effort to stop the early spread of the covid-19 virus.

In contrast to other states, all Arkansas public schools provided on-site instruction for the entire 2020-21 school year with some temporary shifts to virtual instruction in the event of covid outbreaks.

Although schools were open, about 20% of the state's 470,000 public school students opted to learn online from their homes. Parents of some of those students refused to have their students participate in the spring 2021 Aspire testing that had to be done in school-supervised settings rather than at students' homes.

In many cases, the schools were above 80% and some were very close to the 95% mark. Parkview, for example, met the threshold in math but had only 94.49% take the literacy portion of the Aspire tests. Southwest High, in its very first year of operation, struggled with 77.27% taking the literacy and 76.8 % taking the math tests.

There are some open-enrollment charter schools on the list. Some of those included three KIPP: Delta charter school campuses, Lisa Academy High North, and Arkansas Virtual Academy Elementary, Middle and High schools.

Several schools that typically serve high percentages of students who have not succeeded in traditional school settings also were on the list. Those included Graduate Arkansas charter school, Responsive Education Solution's Premier High Schools of Little Rock and North Little Rock and three schools in the Arkansas Division of Youth Services system.

Coffman said that the 111 schools won't be cited by the state this year and that the number of affected campuses was understandable in light of the covid pandemic.

"We will have a chance to bring this to their attention and make sure we have good strategies in place moving forward," Coffman said about the schools.

State Education Board Chairman Ouida Newton of Leola thanked school staffs and students for working hard last year to get to or close to the 95%. She said schools are continuing to work hard this year to get through unexpected challenges.

"They are still plugging along and I know it has not been easy. We don't want them to ever think we don't notice how hard they are working," Newton said.