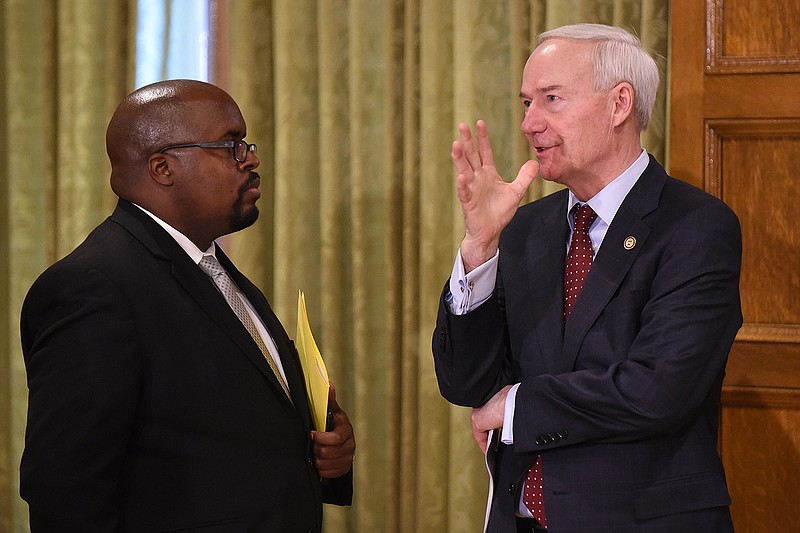 State Secretary of Corrections Solomon Graves talks Thursday with Gov. Asa Hutchinson after a news briefing in which Hutchinson announced a proposal to expand inmate capacity at the state prison at Calico Rock by nearly 500 beds. (Arkansas Democrat-Gazette/Staci Vandagriff)

Gov. Asa Hutchinson, citing a 10-year projection of inmate population growth, said Thursday he wants to use surplus general revenue to expand a prison -- the North Central Unit in Calico Rock -- by about 498 beds.

The Republican governor said the proposed prison expansion could cost between $60 million to $100 million, and the general revenue surplus is projected to be $264.4 million in fiscal 2022, which ends June 30.

But Hutchinson later revealed in an interview with the Arkansas Democrat-Gazette that the state Department of Finance and Administration now conservatively estimates that the surplus will be $500 million.

At his weekly news conference at the state Capitol, the governor said the costs for the 498-bed expansion will be "computed more carefully whenever we have architectural design and planning in place."

With the General Assembly's fiscal session starting Monday, "we want this [prison expansion project] on the table," Hutchinson said.

"The first responsibility of government is public safety," he said. "That is a big responsibility for our state, and it rides on my shoulders. ... I look at our prison population -- we need to address the issue of having space."

The governor said he also has challenged Department of Corrections Secretary Solomon Graves to work on reducing the number of state inmates held in county jails as they await space in prison.

"This number is too high, and it does not give our local court system enough flexibility to arrest people on misdemeanor offenses and have adequate space in the county jail for other purposes, so we need to get that [jail] backup down," Hutchinson said.

In an interview, Hutchinson said he supports raising the $32 per day rate that counties are reimbursed for holding each state prisoner, noting that the state generally increases the rate periodically.

Asked what rate he would be comfortable with, he said, "We are still looking at that."

At his news conference, the governor noted that when he was initially elected governor in 2014, "it was recommended that we spend $100 million on expanding prison space, [and] we reduced that to a $50 million plan and we added prison space.

"We also adjusted our laws that would put more in the parole system versus the prison system, [and] we enhanced our ability to supervise that and you'll see some of those results of that today," he said. "But even with that, we are growing as a state with population and obviously at some point you have to continue to increase prison space."

Murphy said the Board of Corrections on Tuesday approved proceeding with planning and designing an expansion at the North Central Unit.

Graves thanked Hutchinson in a Thursday news release for his continued commitment to giving the Department of Corrections the resources and support needed to meet the goals.

Graves said that since the start of Hutchinson's administration, 680 beds have been added to the prison system.

"We are committed to continue working with our board, the governor, legislators, and local leaders to move this project forward," Graves said.

The Department of Corrections will be soliciting plans from architects for this project and continue to move forward with it, he said.

Graves said his goal would be to start construction during the first half of 2023.

Hutchinson said the state consistently had roughly 16,000 inmates before the prison population artificially dropped amid the covid-19 pandemic in the past two years. He said covid-19 created a restraint on adding inmates to the system. The state's number of inmates is projected to grow 1.4% a year during the next 10 years, he noted.

In 2015, the state had about 5,000 parole violators who entered the prison system and that has remained fairly consistent, the governor said.

"We still have 5,400 parole violators come into the system, but ... the first-time offenders or commitments, were reduced. Once again everything slowed down during covid," Hutchinson said. "Obviously that is going to come back very quickly as we see our case numbers go down."

The same day the Board of Corrections approved the expansion at the North Central Unit, a group of sheriffs from across Arkansas told legislators that crowding in county jails because of state prisoners has reached a crisis point, as violence and gangs are starting to become commonplace in their facilities.

Washington County Sheriff Tim Helder said he has been in law enforcement for 43 years, and he believes the crowding in county jails is as bad as it has ever been.

"There have been spikes throughout the years that were quickly resolved, but this has been sustained the longest I can remember," he said.

The sheriffs pointed out to a legislative committee this week that the last time the state built a new prison was in 2003 when Mike Huckabee was governor.

The law enforcement group spoke to the committee for more than an hour about a lack of space in their county jails because of state inmates, the damage and danger caused by crowded lockups, and the need for a higher reimbursement rate for jails for holding state prisoners.

Murphy said the Department of Corrections had no comment on the testimony given by the sheriffs.

"I, along with both directors, have met with the sheriffs to hear their concerns," Graves told the Democrat-Gazette. "The DOC remains committed to increasing capacity across the department."

Murphy said the Board of Corrections expressed its unanimous support for the North Central Unit expansion.

"Current population trends are a challenge for the entire system," Graves said. "What matters is that all parties involved in the system are committed to making the necessary improvements to the system."

Graves said the department has addressed crowding issues over the years, including adding beds, and turning to other methods and systems for assistance.

"For a time, we were also contracted with Bowie County, Texas, to hold inmates," he said. "We have also reformed our parole system over the past decade through implementing evidence-based intermediate sanctions designed to slow the rate of parole violators returning to the Division of Correction. We have also expanded capacity in the Division of Community Correction, to include the planned acquisition and renovation of the White River Juvenile Detention Center in Batesville."

Graves also said Act 55 of 2021 will be a potential solution.