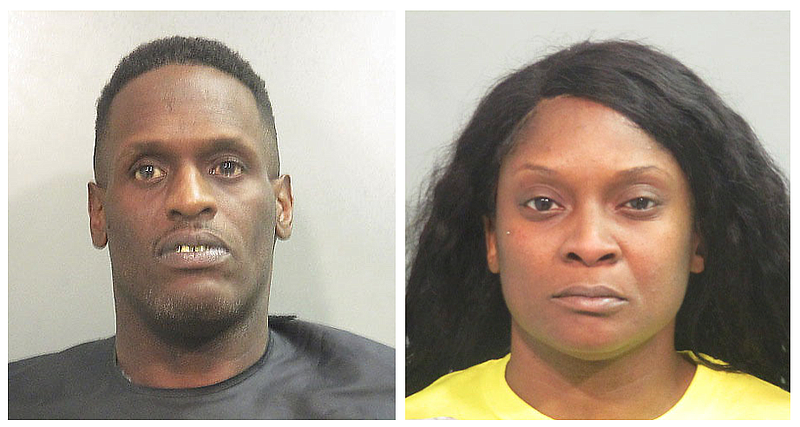 FAYETTEVILLE -- A man and his wife were arrested Sunday after they reportedly fired a gun from their car while chasing their daughter and her boyfriend through Fayetteville.

Torrance Farmer, 47, of 814 N. Storer Ave. in Fayetteville, was arrested in connection with stalking, terroristic threatening, unlawful discharge of firearm from vehicle, possession of firearm by certain persons, fleeing and tampering with physical evidence. Farmer was being held Monday in the Washington County Detention Center with no bond set.

Latoya Samuels, 41, of 4546 W. Sweetgum Lane in Fayetteville, was arrested in connection with stalking, terroristic threatening, fleeing and a number of traffic violations. Samuels was being held Monday on $7,500 bond.

Officers were called to the area of East Township Street and North College Avenue around 10 a.m. Sunday on a report of a shooting. Unique Farmer told officers her parents, Torrance Farmer and Latoya Samuels, were chasing her near College and Township streets in a car, according to a preliminary police report.

She said she had been shot at, but had gotten away from her parents. She made arrangements to meet with officers at the Paradise View Apartment complex off Coy Kaylor Drive.

She said the incident began the night before the chase with her father saying he was missing $1,500 and sending her threatening messages. She said she and her boyfriend, Marlon Gonder, got a room at the Motel 6 on College Avenue rather than have her return home because of the threats, according to the report.

She told police she and Gonder were leaving the motel when her parents pulled up in a blue Chevrolet Impala. She told officers she saw her father holding a weapon outside of the passenger side window. She said she and Gonder drove north on College Avenue, made a U-turn to head south then turned west on Township Street, north on Gregg Avenue, east on Village Lake Drive, south on Keystone Crossing and east on Sunbridge Drive. She said her parents were still following them as Gonder turned onto Sunbridge Drive.

Gonder said he turned south from Sunbridge Drive onto Villa Boulevard when they heard two gunshots, according to the report. Farmer said she didn't see her father point the gun at her, but heard the shots. She said she and Gonder drove to the end of North Villa Boulevard and turned north onto College Avenue. She said her parents had been driving east on Sunbridge Drive to College Avenue where they turned south and then turned into the parking of the Braum's restaurant on North College Avenue.

She and Gonder were able to get away from her parents when traffic blocked them in the parking lot, Unique Farmer said.

An officer later saw a blue Chevrolet Impala leaving the Appleby Apartments and turning south onto Gregg Street. The driver sped away when the officer tried to stop the car, weaving through traffic on Drake Avenue, on Garland Avenue and on Interstate 49 until it finally stopped in the southbound off ramp of I-49 and Porter Road around 10:22 a.m. Sunday, according to the report.

During the chase, the officer saw the passenger throw a black and silver handgun out of the front passenger window. The handgun was later found by police.