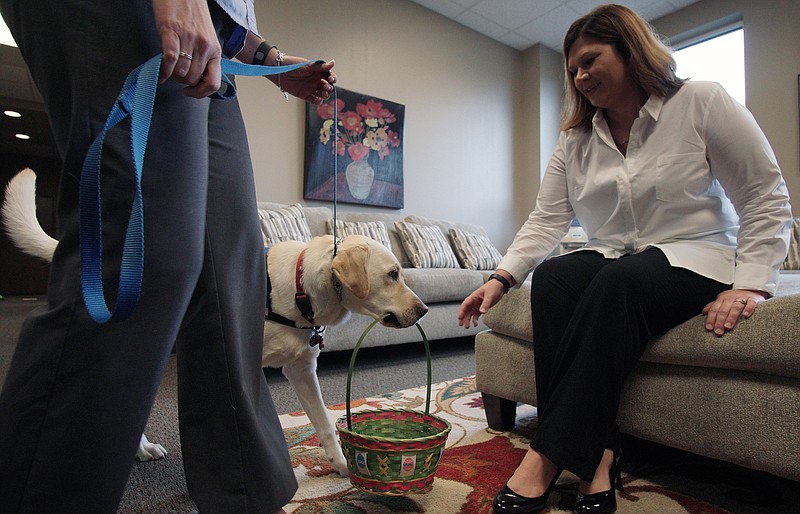 Arkansas Democrat-Gazette/MITCHELL PE MASILUN --9/01/2016-- Barb, center, shows off her skills during a training technique by handing over a basket to Fawn Borden, right, a Victim Witness Coordinator at the Conway Criminal Justice Building Thursday, September 1, 2016. The Training technique is called "Go say hey" and is used as an icebreaker during introductions to help people get more accostomed to Barb.

BENTONVILLE -- An 8-year-old sat in the witness stand as she testified against the man accused of raping her.

August, a courthouse facility dog, sat at her feet out of the sight of jurors. The dog had been brought into the courtroom while jurors weren't present.

David Ethredge, the prosecuting attorney for the 14th Judicial District, allowed Benton County prosecutors to use August, the district's facility dog, to support the girl at the trial. The 14th District is comprised of Baxter, Boone, Marion and Newton counties.

Facility dogs may be used more to support children in interviews or when they testify. The Arkansas Prosecutor Coordinator Office's Paws for Justice program hired Susan Bradshaw as its director. She began work Jan. 10. She came from the prosecuting attorney's office in Faulkner County and already was a trainer with her dog, Barb.

"It is a truly daunting task for a child witness to reveal abuse and trauma in court in front of a room full of strangers," Benton County Prosecuting Attorney Nathan Smith said. "I have seen firsthand that the use of a courthouse dog can comfort a child during this process and help them focus on revealing what happened to them. My hope is that with the expansion of this program, more children can benefit from it and more criminals will be held accountable as a result."

The Coordinator's Office has started its statewide program to help not only children, but also developmentally disabled adults. The Arkansas Legislature passed the law in 2015 allowing the use of courthouse dogs for victims 18 and younger and expanded the law in 2021 to aid developmentally disabled witnesses, said Bob McMahon, director of the Coordinator's Office.

McMahon said they also hired a second trainer, who is waiting to get a dog. The process isn't a short one; it could take months to get a dog, he said.

The plan is for the office to have three dogs and the state will be divided into three regions: south, central and north. The third trainer and dog will be based in Northwest Arkansas while one of the other dogs will be assigned the central region and the south, McMahon said.

He said Arkansas is the second state behind Alabama to have a statewide program. Alabama has 12 dogs, he said. The plan is for Arkansas to get more dogs, and as more dogs come on board, they can shrink the regions, McMahon said.

The office is getting the dogs free from Canine Companions, McMahon said. The organization provides service dogs to adults, children and veterans with disabilities and facility dogs to professionals working in health care, criminal justice and educational settings, according to the group's website.

Canine Companions has nearly 500 facility dogs working across the country in a variety of settings including rehabilitation, education and the criminal justice system, according to the organization's website.

McMahon said the dogs are raised and trained specifically for the task and valued up to $50,000 each.

Bradshaw has had Barb for six years. Barb is 8 years old and is three-fourths Labrador retriever and one-fourth golden retriever.

The animals are called facility dogs because they work with multiple people instead of one person with a disability, Bradshaw said.

Barb responds to 40 commands and knows games to help her interact with children and adults, she said. Barb plays tic tac toe, but she loses every time.

"She plays, but she's not good at strategy," Bradshaw said.

McMahon said the handlers have to complete a two-week training. He said the application also requires them to designate a secondary handler.

"Some may see the work the dogs do in interviews and courts, but at the end of the day, the dogs go home with the handlers. It's 24/7," McMahon said.

Bradshaw said when the process started to get a courthouse dog, the focus was on assisting children when they testified at trials. Barb has assisted in over 200 interviews but participated in only six trials, according to McMahon.

Barb has helped children gain the confidence to testify against their accusers, Bradshaw said. Some defendants hope children won't have the strength to testify, but the possibility of them taking the stand convinces some to plead guilty to resolve their cases, she said.

"Children are not sitting up there by themselves," she said. "It gives them a sense of control that's been stripped away by the whole process."

Children, who may be hesitant about coming to meetings, are now excited because they know Barb will be there, Bradshaw said.

Washington County Prosecuting Attorney Matt Durrett said they haven't yet had a trial where a courthouse support dog was used, but he believes the program is beneficial.

"Child victims are probably the most traumatized by violent offenses," Durrett said. "These highly trained dogs have been shown to comfort those victims and put them at ease while testifying. It's hard enough for an adult victim to testify in a trial, but imagine what it's like for a 10-year-old. These dogs have been trained to calm victims while staying out of sight of the jury to avoid any prejudice to a defendant."

Jay Saxton, Benton County's chief public defender, said it concerns him that any witness testifies and has a dog or any comfort item with them. Saxton worries about the impact if a jury sees the dog or items with the witness.

Jurors could then have sympathy, which in turn could impact the innocence or guilt phase of the trial, he said.

"It's not that I don't have sympathy for a victim or witness in a case, but I also have to look out for my client," he said.

"The victim was very young and nervous about testifying," Phillips said.

Prosecutors arranged a meeting to see how the girl interacted with August. The meeting went well. Phillips filed a motion to allow August to be with the girl when she testified. Karren granted the prosecutor's request. Phillips believes August was a comfort to the girl. She said the girl was holding the leash and her feet were on top of August. It was a comfort to her knowing she could reach out and touch him.

August isn't part of the statewide program but is used by the 14th Judicial District.

The jury found Donald Thatcher, 72, guilty of raping the girl. He was sentenced to 60 years in prison. 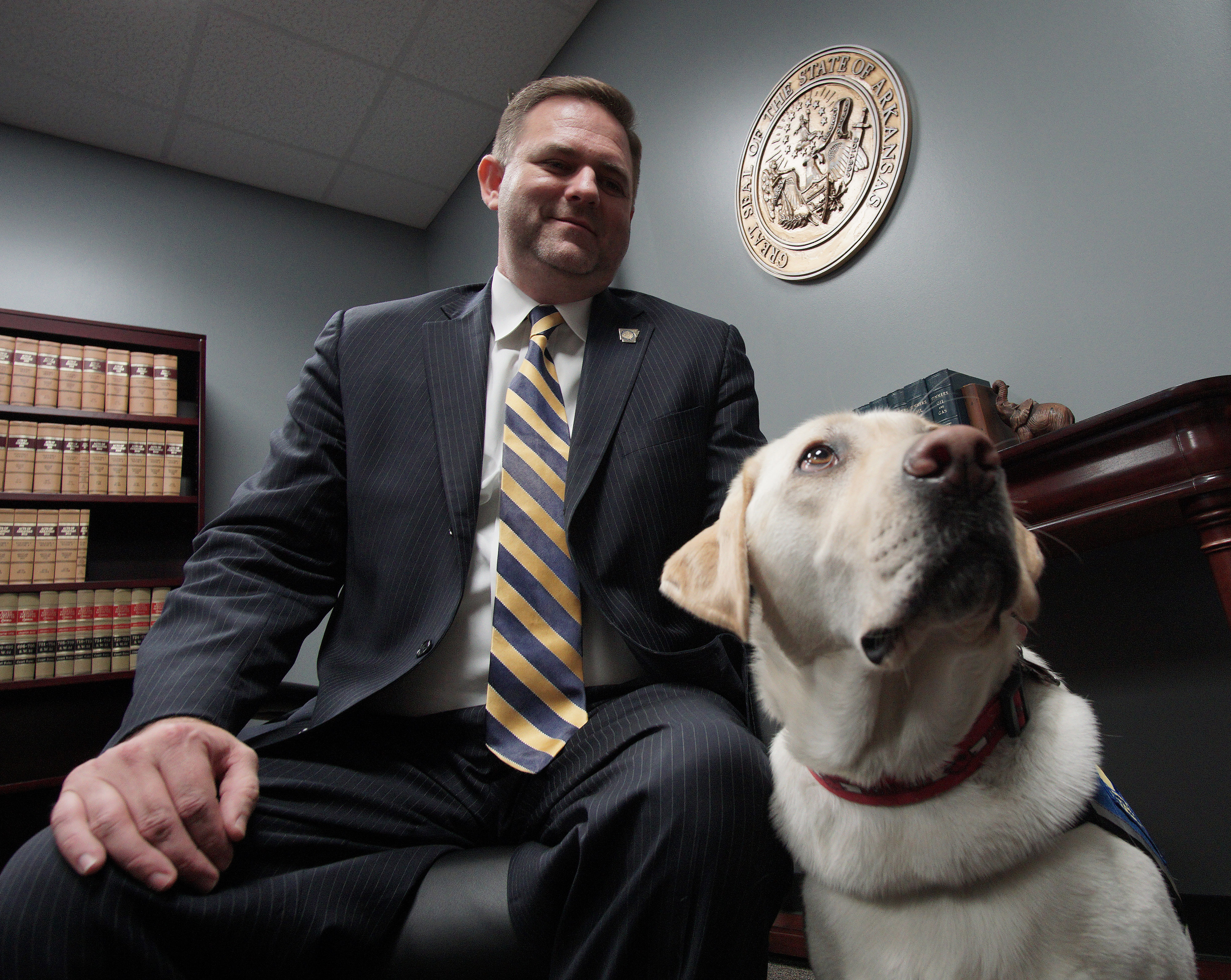