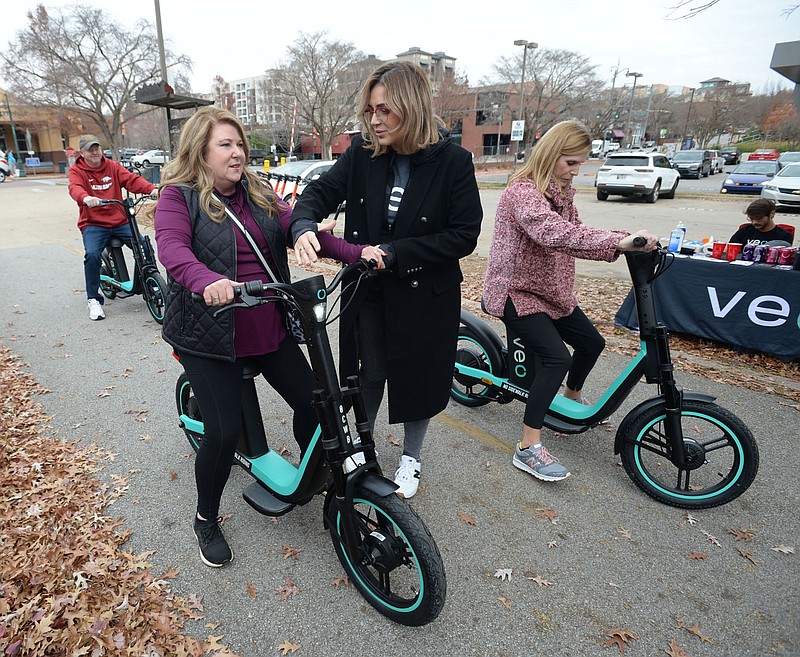 Carol Antunez (center), policy and partnerships manager for VeoRide, helps to acquaint Jackie Moore (left) of Russellville on Dec. 4 with the controls of a sit-down electric scooter before she rides with friends along the Razorback Greenway from Dickson Street in Fayetteville. The City Council got an update Tuesday on scooter use in the city. (File photo/NWA Democrat-Gazette/Andy Shupe)

FAYETTEVILLE -- The city has hit a sweet spot in terms of supply and demand with its electric scooter program, providing a viable means of transportation between walking and driving a car, City Council members heard last week.

The city now has a fleet of 1,000 scooters people can rent and ride using an app on their phones. Companies Spin and VeoRide both have 500 scooters in the city.

The electric scooters are two-wheeled mobility devices with a tall handle bar and standing floorboard. An electric motor propels riders no faster than 15 mph, and the devices weigh less than 100 pounds. The city uses a dockless system, meaning there are no stations to leave or pick up scooters. A geolocation tracker on the app pinpoints a scooter's location.

Ridership has grown significantly since the program launched with 250 scooters in November 2019, said Dane Eifling, mobility coordinator for the city.

That means people traveled about 703,000 miles using scooters in 2020 and nearly 1.3 million miles last year. Eifling said the numbers tell him the program has reached a balance between demand and the number of scooters used. The city averages about two rides per scooter per day. The general standard for the industry is one ride per scooter per day to be considered strong ridership for a market, he said.

"I just look at that and see a healthy program," Eifling said.

The city started off in 2018 with a bicycle share program with VeoRide. The city, University of Arkansas and the city's Advertising and Promotion Commission partnered to contract with the company.

When scooters arrived in late 2019, ridership on the bikes started to wane, and the partners eventually let the contract expire. VeoRide removed the last of its bicycles last June. Eifling said he considered the bicycles a success with more than 120,000 rides taken during the life of the program.

Eifling said the bikes "greased the wheels," so to speak, for the scooter program. After a state law enabled city-sanctioned scooter programs in 2019, the City Council adopted an ordinance to regulate the devices with the intention of avoiding some of the pitfalls other cities had experienced. Cities such as Atlanta and Chattanooga, Tenn., issued bans after scooter-related fatalities and issues with riders dumping scooters all over town became problematic.

To date, Fayetteville police have responded to nine accidents involving scooters, with no scooter-related fatalities, Eifling said. The most severe injury city staff heard of was a broken jaw resulting from someone falling off a scooter on the University of Arkansas campus, he said. University police reported six scooter-related injuries.

Riders in Fayetteville have to take a picture of the scooter before they can park it. Violators can get warnings or fines through the app for parking improperly. Certain parts of town are designated as no-parking zones or slow-ride zones, where the device will automatically slow down to 6 mph.

More than 5,000 warnings were issued in 2020 and last year, with 148 riders issued fines and four people banned between the two companies, Eifling said. About 85% of the devices have sensors alerting full-time staff for the companies when scooters are tipped over so they can go pick them up, he said.

In January, the university instituted new parking rules for the scooters. Riders must now start and end in designated areas on campus, shown through the apps.

Ammen Jordan, active transportation coordinator with the university, said the concentrated area of campus combined with a tremendous amount of foot traffic was leading to conflicts with scooters parked in pedestrian pathways. Parking areas are available throughout campus at marked corrals, bicycle racks and bus stops.

Jordan estimated half of the scooter riders in the city come from, to or through campus. Designating parking areas seemed like a mutually beneficial outcome for everyone on campus, and so far the university has fielded no complaints with the change, he said.

"We have to enable technologies that don't create friction with other users," Jordan said.

Having few serious incidents has shown the success of the program, said Daniel White, operations manager for Spin. The two companies work together despite being direct competitors, he said.

Working together has proved fundamental to the program's success, White said. Staff with each company stay in frequent contact with each other, will deploy scooters in the same spots and even pick up and move each other's scooters when they're knocked over or damaged, he said.

"It's kind of unprecedented in our industry," he said.

Spin employs eight to 20 people in the city depending on the season, White said, with June to November showing peak demand. A small number of full-time employees carry the company throughout the year, with seasonal employees that can be full time or part time hired based on demand, he said.

VeoRide employs 15 people during peak season and its staff work seven days a week to respond to any issues with the scooters, said Christian Thompson, operations manager with VeoRide. The two companies, the city and the university all have worked together to offer a balanced program that provides a sustainable way for people to get around without having to drive a car or take the extra time to walk, he said.

Thompson described phasing out VeoRide's bicycle program as a natural evolution of mobility. The industry, by nature, changes frequently, and it was clear the scooters were serving more of the community's needs, he said.

An online survey taken in 2020 of about 200 people showed 60% of respondents were happy with the city's scooter program, while 27% were unhappy and 13% felt neutral, according to figures Eifling showed the council.

Council member Teresa Turk said a number of unhappy people have reached out to her, mainly about the scooters being strewn about or blocking sidewalks.

The scooters have a customer service phone number printed on them so residents don't have to download the apps to make complaints, Eifling said. The companies employ full-time staff seven days a week to respond to issues, he said.

The city also is working on a new online system using the app SeeClickFix in which residents can report issues with scooters or any other code compliance issues.

Fayetteville Chief of Staff Susan Norton said the app would replace the request for service feature on the city's code compliance webpage and will launch soon, although she did not have a specific date.

Scooters can be ridden all over town but left only in certain locations. For now, the locations are most of downtown, areas along the Razorback Greenway, a section near Gulley Park and another at Lake Fayetteville. The city also opened a scooter zone near Hamestring Creek once the trail there was completed earlier this year.

Eifling said the city is taking an organic approach to opening scooter zones as crews finish trail projects. The idea is to ensure riders have safe routes without having to get on car-heavy streets such as Wedington Drive or College Avenue, he said.

There are no plans to increase the number of scooters, but different types of devices, such as sit-down scooters, may become available, Eifling said.