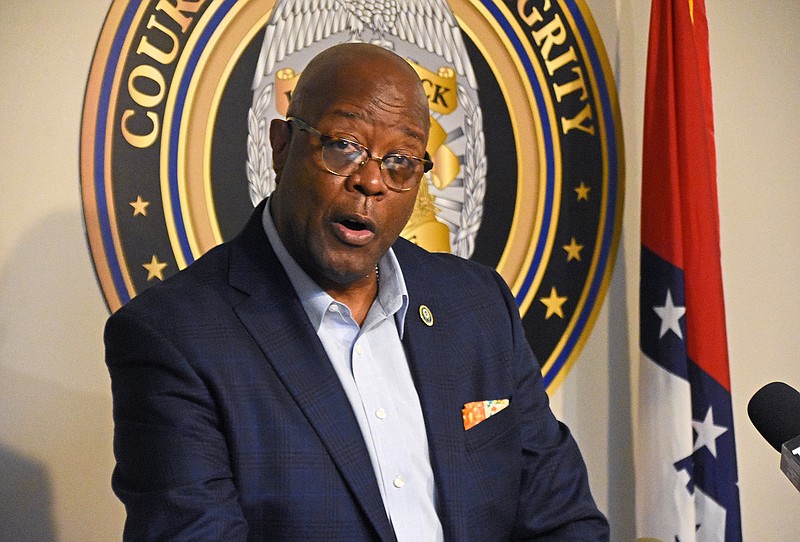 The chief of the Little Rock Police Department was on administrative leave Saturday after he fired his service weapon at a suspect on New Year's Eve, according to a news release Saturday afternoon.

The woman shot at by Little Rock Police Chief Keith Humphrey was not injured and was later arrested, according to the Police Department release.

Officials with the Arkansas State Police are investigating, and Assistant Chief Crystal Young-Haskins will be acting as chief of police during the investigation, Little Rock Mayor Frank Scott Jr. said in a statement on Twitter on Saturday afternoon.

Humphrey, who was on patrol on the night of New Year's Eve, reportedly encountered a fight in the parking lot of the Superstop at 5103 Asher Ave., about 2 miles west of the Arkansas State Fairgrounds.

As Humphrey was exiting his vehicle to intervene, Taz Hayes, 29, fired into the group, according to an Arkansas State Police news release. The shooting injured a 22-year-old.

Humphrey drew his weapon and fired at Hayes, who was not hurt and who fled the scene. Hayes was later arrested by Arkansas State Police.

The 22-year-old shooting victim was taken to a Little Rock hospital and was in critical condition Saturday morning, state police said.

“This is an unprecedented situation because it involves our chief of police,” Scott said in his statement.

The city asked state police to investigate both the initial fight and Humphrey’s response in an effort to remain “accountable, clear and transparent,” Scott said.

It is common practice to place officers involved in shootings on leave pending the results of an investigation, and state police frequently assist local police departments with investigations.

State police investigators will submit their findings to Prosecutor Larry Jegley, who will determine if Humphrey’s use of force was consistent with Arkansas law.

Humphrey and other members of the command staff have patrolled on New Year’s Eve in past years, and Humphrey said in a Thursday news conference that he would be in uniform Friday night.

State police investigators recovered a bullet from a vehicle in the parking lot, and they said it will be examined at the state Crime Laboratory to see if it was fired by Humphrey.

Hayes was held at the Pulaski County jail, and she faces a first-degree battery charge.