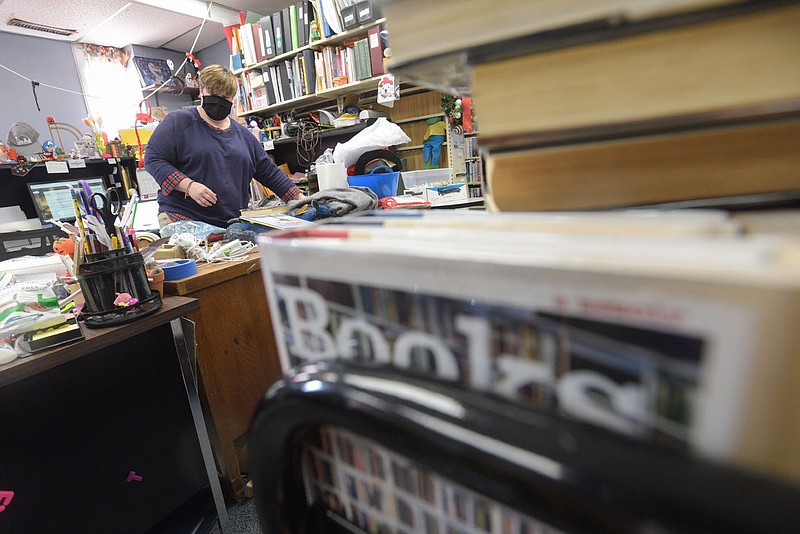 Cadie Brown, a librarian at the Scott-Sebastian Regional Library, works on Thursday, Dec. 30, 2021, in Greenwood. The Sebastian County Library Board, along with Sebastian County, is heading up the development of a new facility for the library. County Judge David Hudson said the county contracted the Fort Smith-based firm MAHG Architecture for library concepts and preliminary building planning services for the project, which included a preliminary cost estimate of more than $4.4 million. Visit nwaonline.com/220102Daily/ for today's photo gallery. (NWA Democrat-Gazette/Hank Layton)

GREENWOOD -- Preliminary planning for a new, larger Sebastian County Library expected to cost millions of dollars has been completed.

The Sebastian County Library Board is heading up the project, along with the county, according to Rene Myers, regional library director for the Scott-Sebastian Regional Library System. The project has a preliminary cost estimate of more than $4.4 million, and the facility is planned to be about 11,000 square feet in size.

The current Sebastian County Library in Greenwood is at 18 N. Adair St. and is about 5,700 square feet, Myers said. It also serves as the headquarters for the library system and houses any extra supplies the other, smaller branches can't contain when not in use. It was built in 1965.

Myers said the facility lacks the space to allow the system to provide modern library services without having to limit itself.

"In 2022, our residents want a different way to seek information," Myers said. "It's not just about a book. It's about families coming to story time and watching our children's coordinator read to children, and it's about just groups of students needing a space to come together to work on a project and share information to make that project successful. It's about our elderly coming in and needing a place to socialize with other people their age and talk about their experiences and share their information."

"And so, we have outgrown our ability to serve the areas as well as they need to be served based on the demand," Hamilton said.

Hamilton estimated the issues have been a factor for the Sebastian County Library for at least the past two decades.

Myers said the planned features for the new facility include meeting and study rooms, as well as larger areas for staff. The preferred site for the project is about two acres at the intersection of Arkansas 10 Spur and U.S. 71 in Greenwood.

Hudson said an anticipated donation of this property is pending.

MAHG's estimated cost for the project of more than $4.4 million was developed April 12, according to Hudson. More than $3.2 million of this is devoted to construction.

"So I'm going to guess that this budget is probably a little light because things have changed rather dramatically since April of '21 to December of '21," Hudson said. "Maybe it'll go the other direction."

Hudson said Wednesday the changes include manufacturing and supply chain issues due to the covid-19 pandemic.

Hudson wrote in a memo to the Quorum Court the county's library revenue and budgets are essentially divided between two budgets -- one for library millage revenue, and another for county sales tax and regional library revenues.

The first of the budgets has $595,736 available for furnishings and fixtures while the second has $605,350 available for the construction project, according to Hudson. This, when combined with $1.35 million in the county general reserve fund earmarked by the Quorum Court over a period of time, brings the total needed to meet the preliminary cost estimate to more than $1.9 million as of Dec. 17.

However, Hudson said it doesn't include revenue generated from selling the current library building and land.

Hudson said Greenwood contracted Hawkins-Weir Engineers to review the water delivery system to the preferred project site, which is in the service area of the James Fork Regional Water District. A possible interlocal agreement between the county and the city to provide the site water and sewer service is pending.

The Quorum Court on Dec. 16 unanimously approved a motion made by Shawn Looper, justice of the peace for District 3, supporting the planning and concepts developed for the library and the continued earmarking of $1.35 million for the project. Looper said this demonstration of support could help the Library Board solicit private donations.

Myers said fundraising for the project will depend on the land donation going through and utility services being able to be brought to the preferred site. 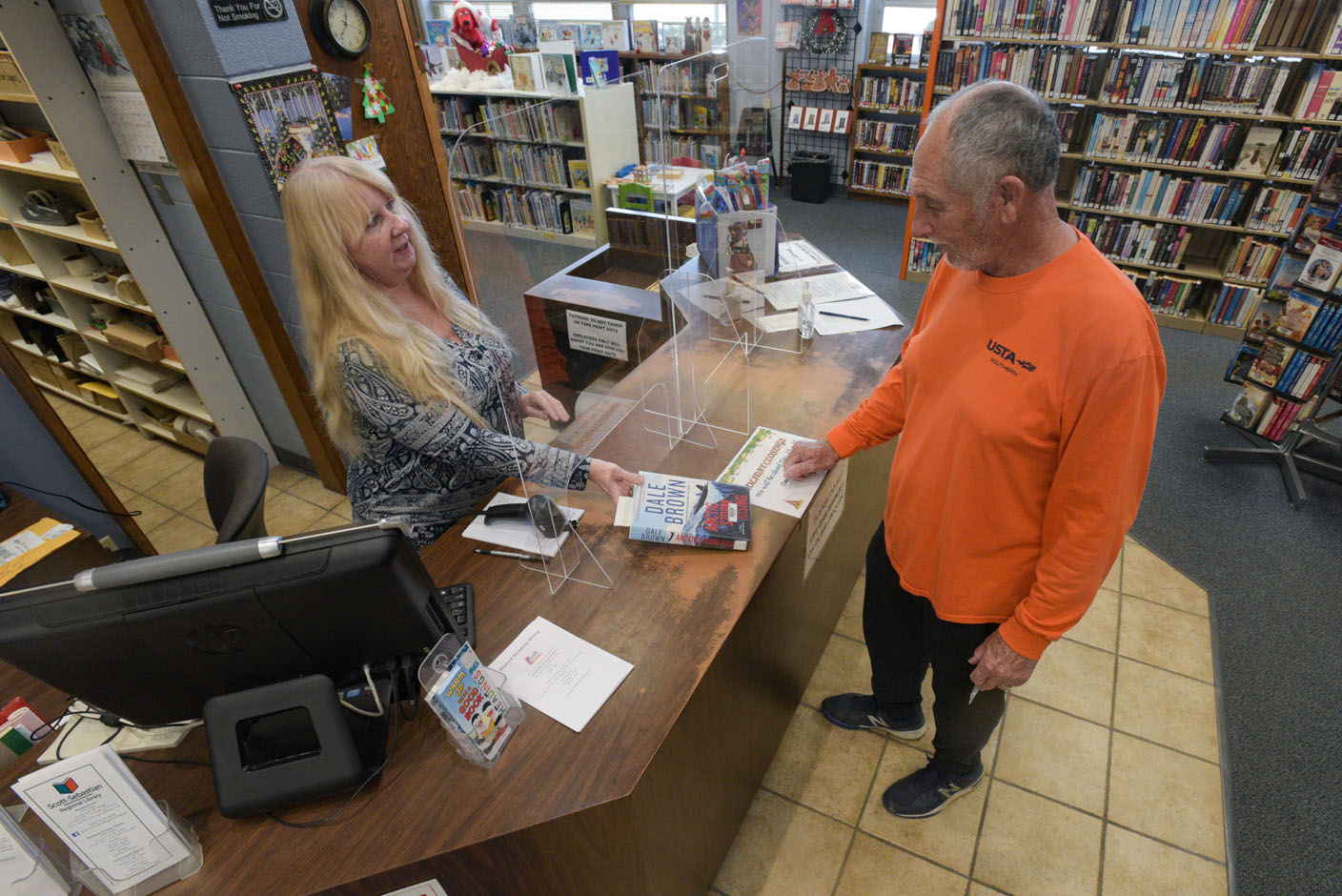 Ken Hamilton, chairman of the Sebastian County Library Board, checks out a book with help from librarian Marla Hicks on Thursday, Dec. 30, 2021, at the Scott-Sebastian Regional Library in Greenwood. The Board, along with Sebastian County, is heading up the development of a new facility for the library. County Judge David Hudson said the county contracted the Fort Smith-based firm MAHG Architecture for library concepts and preliminary building planning services for the project, which included a preliminary cost estimate of more than $4.4 million. Visit nwaonline.com/220102Daily/ for today's photo gallery. (NWA Democrat-Gazette/Hank Layton)
More News