Amazon workers in Alabama to cast ballots next month on organization bid by The New York Times | January 12, 2022 at 2:23 a.m. 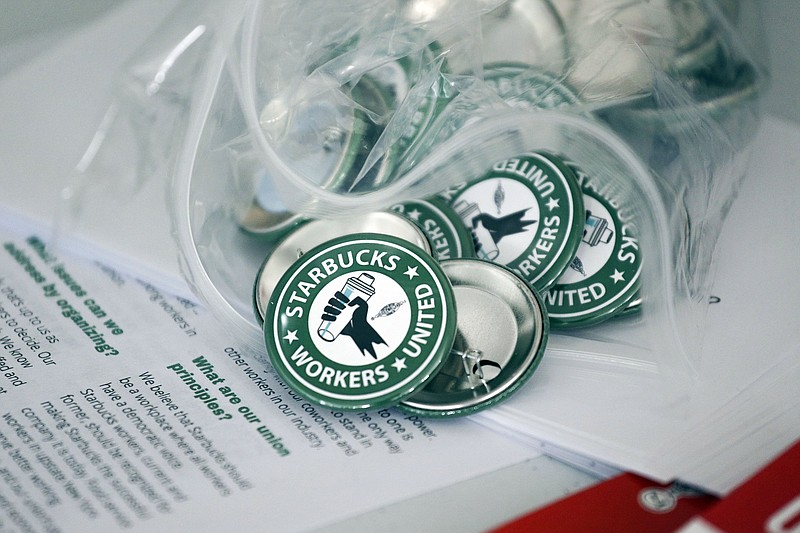 FILE - Pro-union pins sit on a table during a watch party for Starbucks' employees union election, Dec. 9, 2021, in Buffalo, N.Y. On Monday, Jan. 10, 2022, the National Labor Relations Board confirmed that a second Starbucks store near Buffalo has voted to unionize, one of a growing number of the coffee chain?s stores seeking to organize workers. (AP Photo, File)

The National Labor Relations Board announced Monday that it had certified a victory for a union at a second Starbucks store in the Buffalo, N.Y., area, where votes were tallied in December but remained inconclusive as the union challenged the ballots of several employees it said did not work at the store.

Separately, the board told Amazon workers in Alabama that they will have another shot at voting to form a union, as it scheduled a mail-in election to start Feb. 4.

For Starbucks workers, the labor board previously declared the Starbucks Workers United union the winner at another Buffalo-area store when it counted the votes Dec. 9, and the union lost an election at a third store.

The board agreed with the union that the challenged ballots should not count, giving the union a 15-9 win. None of the other roughly 9,000 company-operated Starbucks locations in the United States have a union.

Labor experts have said that establishing a second unionized store in the same market could provide a significant boost to the union. It is part of Workers United, an affiliate of the giant Service Employees International Union.

Under U.S. labor law, employers are obligated to bargain in good faith with a union that has won a labor board election, but they are not required to reach agreement on a contract. As a result, winning a contract often requires unions to apply economic pressure such as a work stoppage, something that a second store could make more potent.

Last week, several employees of the first unionized store near Buffalo walked off the job amid concerns about rising covid-19 infection rates. The workers said they returned Monday.

Starbucks has 10 business days to request an appeal of the decision announced Monday.

Throughout the union campaign last year, Starbucks dispatched out-of-town managers and a top executive to Buffalo in what it said was an attempt to fix operational issues like understaffing and the poor layout of certain stores. The officials often questioned employees about their workplaces and helped with menial tasks like throwing out garbage.

Several union supporters said they were intimidated by the presence of the officials and were disoriented by other disruptions to their work lives, such as the company's decision to temporarily close certain stores and send employees to other locations.

Meanwhile, the labor board on Tuesday told Amazon workers in Bessemer, Ala., that they will have until March 25 to submit their votes. The agency will count the ballots March 28.

Workers at an Amazon warehouse near Birmingham voted against forming a union last spring after a highly contentious and public campaign. The labor agency threw out the results after finding that Amazon improperly interfered with the election, opening the door for a new vote.

The board told the workers Tuesday that in the original vote, Amazon had "interfered with the employees' exercise of a free and reasoned choice" by having a mailbox installed at the warehouse, "creating the appearance of irregularity," and polling workers about their opinion. Amazon, which has said the mailbox was intended to make voting easier, has not appealed the decision to rerun the election.

The prominent organizing effort has been run by the Retail, Wholesale and Department Store Union.

Information for this article was contributed by Karen Weise of The New York Times.