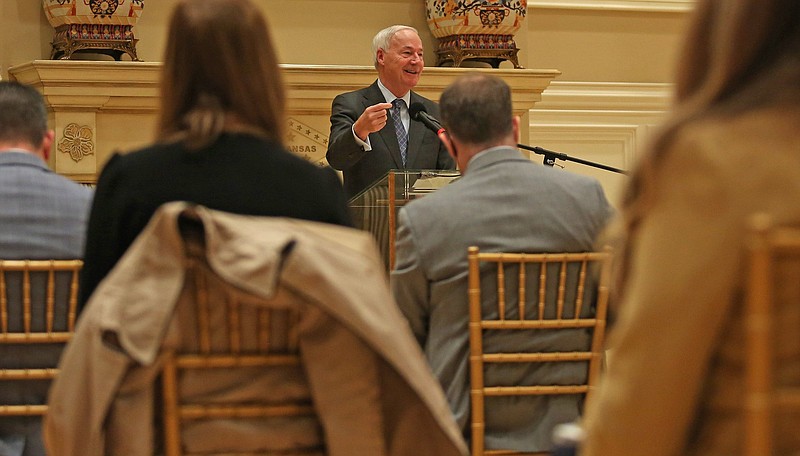 The $3 billion steel mill that U.S. Steel announced Tuesday that it would build in Osceola -- the largest economic development project in Arkansas history -- came together in part because of millions of dollars in incentives that state officials said they will make available to the steelmaker.

But Gov. Asa Hutchinson said the high-quality steel that the mini mill's workers will begin producing as soon as 2024 will serve as an economic incentive in its own right -- a lure held out to attract potentially even bigger projects to not only northeast Arkansas but the entire state.

"Whenever you look at what they're going to produce, the high-manufactured technology-advanced steel that is what is used in the automobile industry and so this puts us in a better position to say to the automobile industry: 'Locate in Arkansas,'" the governor said in a briefing with reporters Wednesday morning at the Governor's Mansion.

"Put your next manufacturing facility here. Look at this steel that we're producing, how close you would be to this production of steel in our state? So it's a great success story."

Arkansas Commerce Secretary Mike Preston said industries attracted to the state because of this project will range from suppliers to end users.

"We now have this to our advantage. It's in our backyard. It is in Arkansas. We have the workforce. They know how to get it done. We have additional land. To me, the sky's the limit."

The plant seemed like a perfect fit for northeast Arkansas, which has been producing steel dating back to the 1980s when Bill Clinton was governor and which Preston called a "steel mecca."

Hutchinson credited Clinton and another predecessor, Mike Beebe, for their efforts in attracting the steel industry.

"I want to give a compliment to former Governor Bill Clinton who helped recruit Nucor Steel into Mississippi County and then subsequent to that of course we had Big River Steel during the Beebe administration with the first Amendment 82 project," Hutchinson said.

U.S. Steel came to the region almost three years ago when it purchased a 49.9% interest in Big River Steel. It bought the rest a year later. The total price tag was almost $1.5 billion.

"Please note that we did compete for it," Hutchinson said.

In its announcement, U.S. Steel cited the region's amenities as factors in its decision over sites in Mississippi and Alabama. But those amenities and its history with the steel industry weren't enough, said Hutchinson.

"In Alabama, you've got the Gulf Coast. There's a lot that each individual state offers and compete in. What we do have is the people who are experienced in steel production. You've got utility rates that are reasonable, you've got access to rail that's critically important.

"But other states offered those things as well," Hutchinson said. "So incentives do play a role."

In fact, the governor added, U.S. Steel never would have had the opportunity to purchase Big River Steel had not the state used an incentive package supported by the Legislature to attract the project.

"They realized the importance of this, and without their support of these economic incentives we could never win this project," he said.

The incentive package hasn't been finalized, according to Preston. But the Legislature enacted its centerpiece last month.

Identical Arkansas House and Arkansas Senate bills that Hutchinson signed into law as Acts 3 and 4 of the second extraordinary session of the 93rd General Assembly make available recycling income tax credits that would cost the state an average of $11 million annually for 14 years or $8.8 million a year if the state buys back the tax credits at a 20% discount.

The law creates a new project type for steel manufacturers to qualify for an income tax credit for waste reduction, reuse or recycling equipment.

State law now provides an income tax credit for 30% of the purchase price of waste reduction, reuse or recycling equipment for a qualified manufacturer of steel.

The project also would be required to have a positive cost-benefit analysis from the Arkansas Economic Development Commission and the Department of Finance and Administration; an incentive agreement with the commission with performance and clawback provisions; begin on or after Jan. 1, 2021; and a closing date of necessary debt and equity financing before July 1, 2023.

Preston said a cost-benefit analysis of the U.S. Steel project shows it is positive, but he said it couldn't be publicly released because it contained proprietary information.

"For every tax dollar we're putting into a project we're yielding at least a tax dollar back in state revenues," he said. That doesn't count any local taxes. It's positive. But it's proprietary."

The Legislature also enacted legislation that would allow the state's chief fiscal officer to transfer $50 million from the long-term reserve fund to the general allotment reserve fund for economic development incentives.

Under the new laws -- Acts 7 and 8 -- the chief fiscal officer, after deciding that funding for incentives is needed, may transfer that money to the Quick Action Closing Fund for economic development incentives for U.S. Steel's proposed expansion in Mississippi County.

If U.S. Steel receives the money, the funds would go toward infrastructure for the site of the proposed expansion.

The long-term reserve fund is expected to receive that $50 million from the state's property tax relief fund by the end of this year, according to legislative leaders.

Of that, $17.4 million will be transferred into a restricted reserve account, increasing its balance to $28.5 million. A majority vote of the Legislative Council is required to spend the account's money.

Local officials also took money to the table. They included $5 million and $1 million, respectively, from Mississippi County and Osceola to U.S. Steel for reimbursement for cost of the land for the project.

The governor also said Mississippi County is going a step further and offering to pay 10% of the cost of a new home starting with a $200,000 price tag and capping it at $500,000.

"That is an incredible incentive for location in Arkansas," Hutchinson said, noting that Mississippi County lost 9,000 jobs when the former Eaker Air Force Base closed in 1992. The steel industry has reclaimed 5,000 jobs.

The county continues to lose population although at a slower rate than before, according to Clif Chitwood, the economic development officer for Mississippi County. The incentive for home ownership is a last-ditch effort to increase the population.

"We will probably never have a better shot than this," he said Wednesday afternoon.

The effort to land the project began with a Zoom meeting that included with U.S. Steel's top executive, David B. Burritt, and Hutchinson in September. Four months later, it concluded with another phone call between the two men last week, Hutchinson said.

Challenges remain, but it was hard for the governor and his aides not to hide their glee at the size of the $3 billion project, one that also brings an unequaled payroll -- 900 jobs with an average wage of more than $100,000 -- as well as the 2,400 indirect jobs the project will likely create.

In the short term, up to 2,000 people will participate, if only temporarily, in construction of the mill.

But there are some things about projects of this magnitude that cannot be measured, Hutchinson said.

"The fact that Arkansas is going to play such an integral role in American-produced steel is pretty exciting for the state. It is one of those calling cards."