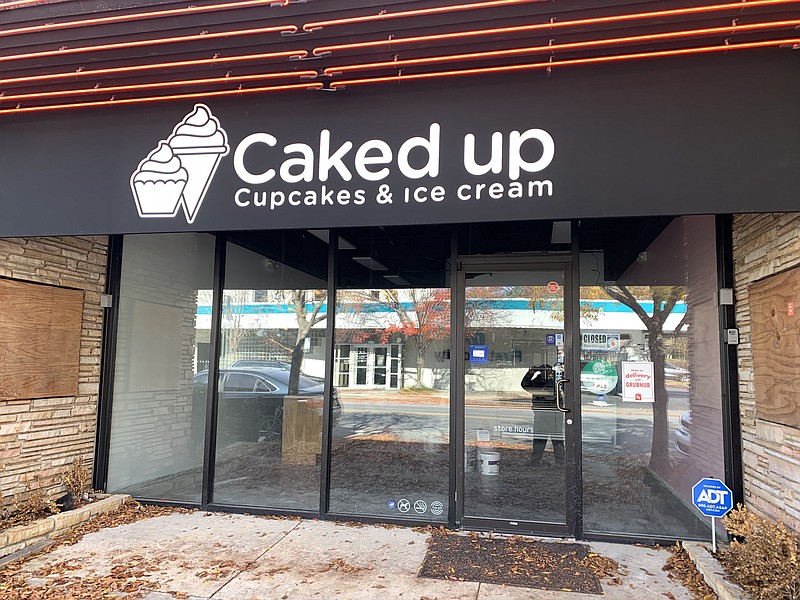 Blue Dolphins Fish & Chicken, 4324 Camp Robinson Road, North Little Rock, which had been "temporarily closed," according to a sign on the door, for at least five months, reopened Jan. 4. Hours are 10 a.m.-11 p.m. daily. The phone number is (501) 753-9000 (and we actually got somebody to answer during business hours). The Facebook page is facebook.com/bluedolphinsfishandchicken.

We still have not been able to ascertain an actual opening date for Jess's Chicken, 10907 N. Rodney Parham Road, Little Rock, which the corporate folks at David's Burgers who are behind the concept, said last year would be close to the first of this year. However, we have seen signs of life there for the first time in a couple of months — workmen and the trucks of workmen outside in parking spaces and in what will eventually be a drive-thru.

However, we've seen no signs of life at Caked Up Cupcakes and Ice Cream, going into the former Poke Hula space, 5621 Kavanaugh Blvd. in Little Rock's Pulaski Heights. Cupcake fans are hoping it'll hold up better than the previous string of failed cupcake shops on that stretch of Kavanaugh, including two previous occupants of the space at the corner of Fillmore Street, the Cupcake Factory and Cupcakes on Kavanaugh.

The new awning is in place, but we don't yet have a timeline for the opening in its new home for Charlee's Good Time Drinkery, in the former Damgoode Pies River Market location, 500 President Clinton Ave., Little Rock, that has housed at least a half-dozen restaurants over the past couple (or triple) of decades. You will recall Charlee's moved some months ago out of the Prospect Building, 1501 N. University Ave., Little Rock, and yielded up its open-until-5 a.m. private club license to do so. We got only a busy signal at the listed phone number, (501) 904-1127, and attempts to contact management via the Facebook page (facebook.com/charleesgoodtime) have stopped bearing fruit.

One of our correspondents has noticed work toward a remodel and update of the long-vacant former Royal Buffet (originally a Bonanza), 109 E. Pershing Blvd., North Little Rock, though there's no indication of just what it will ultimately become.

The state Health Department approved a December plumbing permit application for a Starbucks at 13820 David O. Dodd, Little Rock, confirming in part a reader's report that a pending convenience store there with gas pumps would in fact have a Starbucks as a component.

Corey and Briana Graves, co-owners of the Red Light Roastery Coffee House, 1003 Park Ave., Hot Springs, have taken over the Spa City's Mueller's Bistro & Bakery, 111B Crawford St., posting on Facebook (facebook.com/bestbakeryhotsprings) that "We will not be changing much, but are bringing in Red Light Roastery Coffee House coffee for all you local Java lovers." Corey, we're told, is "adding a French dip to the menu" while "Briana is bringing in Texas sized kolaches. ... We also brought in an amazing baker/decorator, Marina Jackson, and will be expanding our custom cakes and cookies!" The bistro/bakery was scheduled to reopen Jan. 5 but we got only a voicemail at the listed phone number, (501) 623-7005; hours are 8 a.m.-2 p.m. Wednesday-Sunday. The website is muellersbistroandbakery.com. Meanwhile, the coffee house is closed until Monday "for a little recharge and maintenance." The website, redlightroastery.com, explains, meanwhile, that [a]s we grow as a coffee roastery we will continue providing fresh roasted coffee to restaurants & cafes, and ease out of cafe operations by 2024." The phone number there is (501) 609-9357.

And gastropub chain/franchise operation Bar Louie, which has locations in Little Rock and North Little Rock, is teaming up with Chloe Wine Collection of The Wine Group to launch a new cocktail, Winter Citrus Punch; they'll donate $1 for every cocktail sale to Action Against Hunger, with a goal of raising $30,000 for the a global humanitarian nonprofit that treats and prevents child malnutrition and supports communities with sustainable solutions to hunger. The cocktail, if you're interested, is made with Deep Eddy Lemon, O3 Orange Liqueur, Chloe Pinot Grigio, vanilla, winter citrus, sparkling water, orange and grapefruit, according to a news release. It's part of the bar chain's Cocktails for a Cause program. You can also make donations at barlouie.funraise.org.