Full withdrawal expected by Wednesday; signals mixed on unrest’s cause by IVAN NECHEPURENKO THE NEW YORK TIMES | January 14, 2022 at 4:29 a.m. 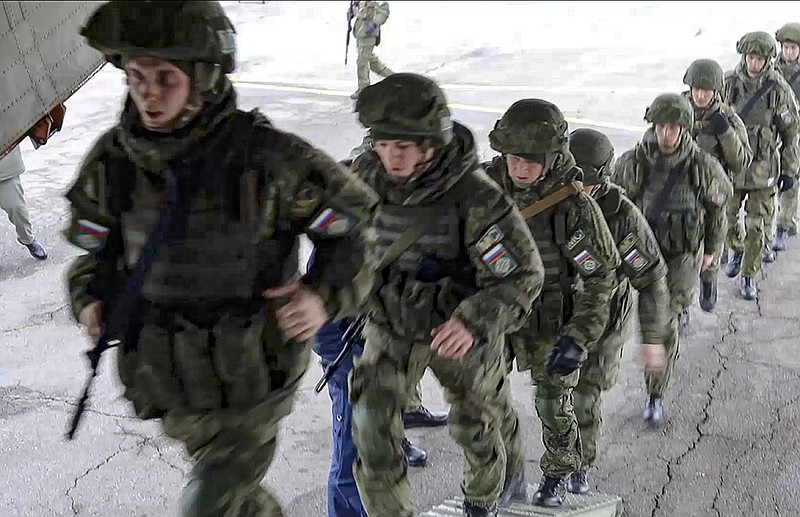 Russian peacekeepers of the Collective Security Treaty Organization board a Russian military plane Thursday at the airport outside Almaty, Kazakhstan. Many people in Kazakhstan had “negative” feelings about the presence of Russian troops, a political analyst said. (AP/Russian Defense Ministry Press Service)

MOSCOW -- A Russian-led military alliance on Thursday began the process of withdrawing troops from Kazakhstan, Moscow said, after a weeklong deployment that helped stabilize the Central Asian country amid a wave of political unrest that left dozens dead and thousands injured.

Troops of the alliance, the Collective Treaty Security Organization, a NATO-like group that includes Russia and five other former Soviet states, have begun handing over strategic facilities that they were guarding to the local authorities and were preparing to leave the country, the Russian Defense Ministry said in a statement.

At least one military transport plane with Russian troops on board has already departed from the airport in Almaty, Kazakhstan's largest city, according to video footage from the scene. The withdrawal should be completed by Wednesday, Russian Defense Minister Sergei Shoigu said Thursday at a meeting with President Vladimir Putin.

Russian and Kazakh officials said this week the troops would be withdrawn once the unrest had been brought under control, amid concerns among many in Kazakhstan that they would be stationed indefinitely in the country, permanently anchoring it in the Kremlin's sphere of influence.

Many people in Kazakhstan had "negative" feelings about the presence of Russian troops in their country, Dimash Alzhanov, a political analyst, said in a phone interview from Almaty.

Therefore, "the decision was made to announce as quickly as possible that their mission had been fulfilled," Alzhanov said. By extending a helping hand at the time of crisis, Putin had achieved a geopolitical triumph, he said.

But "such a favor has its own price and will not be forgotten," the analyst noted. "We will know what that price will be later."

Last week, Kazakhstan was plunged into the worst political crisis in its three decades as an independent country after protests over a fuel price hike spread across the country and turned Almaty, its most prosperous city, into a scene of armed street battles.

While protests were largely peaceful in the west of the country, they spiraled out of control in several big cities and most of all in Almaty, with police there either unwilling or unable to contain violence that led to looting and the burning of cars and buildings. The airport in Almaty was captured by a mob and only reopened to flights Thursday.

Kazakh authorities have been sending contradictory messages about the origins of the violence.

Without presenting evidence, President Kassym-Jomart Tokayev said in a speech Monday, his country had been overrun by a group of international terrorists. He also said that 20,000 "bandits" had attacked Almaty in a Twitter post that was later removed from his official account.

Adding to the overall sense of confusion, authorities still have not released an official tally of how many people died in the clashes and many Kazakhs have been unable to locate relatives and friends. More than 9,800 people have been detained in the aftermath of the crisis, according to authorities.

Some analysts say they believe that the violence stemmed from an internal power struggle among the country's elites, pointing to the removal of various government and security officials that followed the unrest.

On Thursday, the National Security Committee, Kazakhstan's most powerful security agency, said it suspected Karim Masimov, its former chief who was dismissed during the turmoil last week, of attempting to stage a coup. Masimov and two of his deputies have been arrested.

Masimov was one of the most powerful allies of the former president, Nursultan Nazarbayev, according to Alzhanov. Nazarbayev ruled Kazakhstan from 1990 to 2019, when Tokayev, his hand-picked replacement, took over.

Tokayev has since made comments implying that Nazarbayev was responsible for the cronyism and corruption that many analysts feel contributed to the unrest. Many in Kazakhstan, however, doubt that Masimov could have orchestrated the unrest on his own.