No on stopping filibuster, she says by Compiled by Democrat-Gazette Staff From Wire Reports | January 14, 2022 at 7:04 a.m. 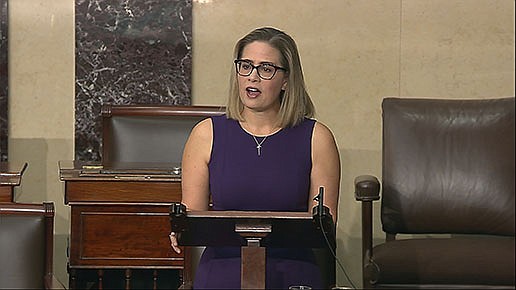 Sen. Kyrsten Sinema declares her opposition to ending the filibuster Thursday in a speech on the Senate floor, calling such action a “short-sighted” rules change to get past a Republican blockade. (AP/Senate Television)

WASHINGTON -- President Joe Biden's drive to push new voting rights protections through Congress hit an obstacle Thursday when Sen. Kyrsten Sinema, D-Ariz., declared that she would not support undermining the Senate filibuster to enact new laws under any circumstances.

Preempting a visit by Biden to the Capitol to rally Democratic support, Sinema took to the floor to say that while she backed two voting rights measures that her party is pushing and was alarmed about new voting restrictions being enacted by Republicans in some states, she believed that a unilateral move to weaken the filibuster would only foster growing political division.

"These bills help treat the symptoms of the disease, but they do not fully address the disease itself," Sinema said. "And while I continue to support these bills, I will not support separate actions that worsen the underlying disease of division infecting our country."

Her speech reiterated what has long been her stated position, but it amounted to a setback for Biden delivered just hours before he was to appear on Capitol Hill to lobby Democrats to back his push to change the Senate rules, if necessary, to enact new voter protections.

[Video not showing up above? Click here to watch » arkansasonline.com/114sinema/]

Sinema's refusal to reverse course appeared to doom both of the bills in the evenly divided Senate, where Democrats lack the 60 votes that would be needed to break a Republican filibuster and take them to a final vote.

Her speech was an unwelcome development for Democrats, who on Thursday began a fresh push to force a showdown over the fate of the voting rights measures and the reach of the filibuster.

Biden had gone to the Capitol to prod Democratic senators in a closed meeting, but he was not optimistic when he emerged. He vowed to keep fighting for the legislation that advocates say is vital to protecting elections.

"The honest to God answer is I don't know whether we can get this done," Biden said. He told reporters, his voice rising, "As long as I'm in the White House, as long as I'm engaged at all, I'm going to be fighting."

The moment once again leaves Biden empty-handed after a high-profile visit to Congress. Earlier forays did little to advance his other big priority, the "Build Back Better Act" of social and climate-change initiatives. Instead, Biden returned to the White House with his agenda languishing in Congress.

Biden spoke for more than an hour in private with Senate Democrats, including Joe Manchin of West Virginia, who also opposes changing Senate rules.

Manchin said in a statement later: "Ending the filibuster would be the easy way out. I cannot support such a perilous course for this nation."

For weeks, Sinema and Manchin have come under pressure to support rules changes that would allow the party to pass its legislation with a simple majority -- a step both have long opposed.

[Video not showing up above? Click here to watch » arkansasonline.com/114bidenbill/]

Though former President Donald Trump and other Republicans also pressed for filibuster changes when he was president, Senate Minority Leader Mitch McConnell, R-Ky., called Sinema's speech an important act of "political courage" that could "save the Senate as an institution."

Colleagues in her party weren't as charitable.

But Sen. Angus King, a Maine independent who once opposed changing the Senate rules, said, "The path forward is very difficult, particularly based upon Sen. Sinema's statement today." He said, "she believes that the risk of changing the filibuster is greater than the risk of what's going on in the states. I hope profoundly that she's right. I fear that she's wrong."

The House began the campaign by passing a repackaged pair of voting rights bills, over uniform Republican opposition.

Acting as part of a Democratic plan to expedite consideration of the bills in the Senate, the House approved the new measure on a party-line vote of 220-203 after a heated partisan debate in which lawmakers clashed over the state of election laws across the country.

The new legislation combined two separate bills already passed by the House -- the Freedom to Vote Act and the John Lewis Voting Rights Advancement Act -- and joined them in what had been an unrelated measure covering NASA. The move will allow the Senate to take the bill directly to the floor, skirting an initial filibuster, although Republicans could still block it from going to a final vote.

Democrats said the legislation was urgently needed to offset efforts taking hold in Republican-led states to make it more difficult to vote after Democratic gains in the 2020 elections and Trump's false claim that the vote was stolen. They argue that the flurry of new state laws is clearly intended to reduce voting in minority communities, amounting to a contemporary version of the kinds of restrictions that were prevalent before the enactment of civil rights laws in the 1960s.

"There are people who don't want you to vote, and they are using every tool in the toolbox to make it harder," said Rep. Debbie Wasserman Schutz, D-Fla., referring to the enactment over the past year of new voting restrictions in Republican-led states. "Voter suppression has not been consigned to the history books. It is here today, right now."

Republicans railed against the maneuver used to pass the House bill Thursday, accusing Democrats of "hijacking" the space agency measure to push through legislation that they said represented federal intrusion into state voting operations to give an unfair advantage to Democratic candidates.

Sen. Charles Schumer, D-N.Y., the majority leader, said the Senate would begin debate on the House-passed bill as quickly as possible. It will be the Senate's fifth attempt to consider such legislation after Republicans have used the filibuster four times to prevent the bills from even reaching the floor.

"The Senate will finally hold a debate on the voting rights legislation for the first time in this Congress," Schumer said Thursday. "Every senator will be faced with the choice of whether or not to pass this legislation to protect our democracy."

While all 50 Senate Democrats are in support of the legislation, Republicans are almost uniformly opposed, leaving Democrats short of the 60 votes needed under current rules to end debate and force a final vote. Biden urged Democrats on Tuesday to force through a rules change for the voting rights legislation to allow the party to circumvent a filibuster through a simple majority.

Sinema and Manchin have said they would not do so, meaning the legislation will die in the Senate if they do not change their positions.

WHAT'S ON THE LINE

The Democratic package of voting and ethics legislation would usher in the biggest overhaul of U.S. elections in a generation, striking down hurdles to voting enacted in the name of election security, reducing the influence of big money in politics and limiting partisan influence over the drawing of congressional districts.

The package would create national election standards that would trump the state-level GOP laws. It would also restore the ability of the Justice Department to police election laws in states with a history of discrimination.

The Freedom to Vote Act contains an array of proposals to establish nationwide standards for ballot access, aiming to nullify the wave of new restrictions in states.

It would require a minimum of 15 consecutive days of early voting and that all voters are able to request to vote by mail. It would also establish new automatic voter registration programs and make Election Day a national holiday.

The Freedom to Vote Act is a narrower version of legislation that Democrats introduced early last year but revised to suit Manchin, who said the original bill was overly broad, and he insisted on including a provision requiring voters to present some form of identification.

A second measure named for Rep. John Lewis, the civil rights icon and former congressman who died in 2020, would restore parts of the Voting Rights Act weakened by Supreme Court rulings.

Among the provisions was one mandating that jurisdictions with a history of discrimination win previous approval -- or "preclearance" -- from the Justice Department or federal courts in Washington before changing their voting rules.

Failure to pass it would break a campaign promise to Black voters, who helped hand Democrats control of the White House and Congress, and would come just before midterm elections when Democrats' slim majorities will be on the line.

Democrats have still pledged to force a public showdown over the bill on the Senate floor, which could stretch for days and carry echoes of civil rights battles a generation ago that led to some of the most famous filibusters in Senate history.

Schumer had initially set Monday's Martin Luther King Jr. holiday as a deadline to either pass the voting legislation or consider revising the filibuster rules.

"The right to vote has not been so endangered since Dr. King walked among us," said Rep. Steny Hoyer, D-Md., the House majority leader.

"You know what wasn't bipartisan? Passage of the 13th Amendment," he said of the constitutional amendment that abolished slavery.

Information for this article was contributed by Carl Hulse of The New York Times; and by Brian Slodysko, Lisa Mascaro, Alexandra Jaffe, Colleen Long and Michael Balsamo of The Associated Press.