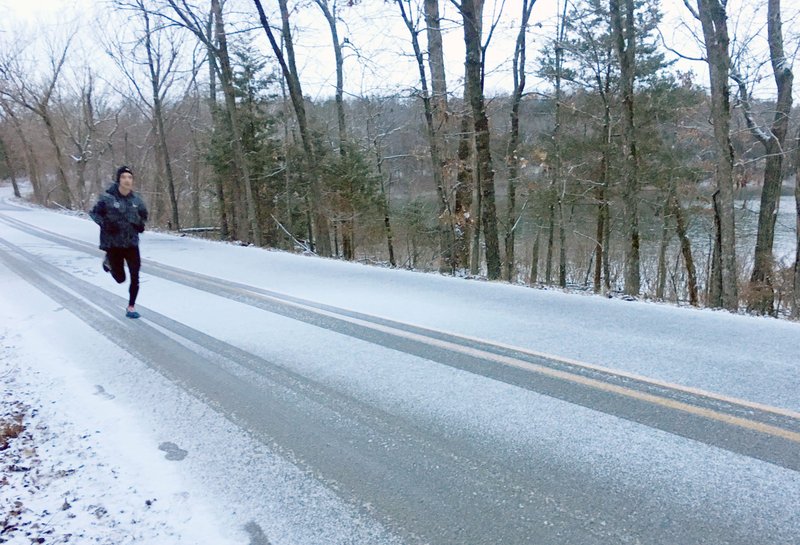 In this Jan. 2020 file photo, Jeremy Morgan of the Rogers area runs along a county road in the Rocky Branch area near Beaver Lake. (NWA Democrat-Gazette/Flip Putthoff)

Benton and Washington counties could see between 1 and 3 inches of snow Saturday as a front moves across the area, according to the National Weather Service.

"At this point, it looks like Northwest Arkansas, especially the higher terrain, has the best chance at seeing the greatest snowfall accumulations," Michael Bowlan, a weather service meteorologist, wrote. "There is still some uncertainty, so continue to monitor the latest forecast. Some travel impacts can be expected, especially with the potential for blowing snow and temperatures dropping throughout the day."

Snow accumulation amounts have trended down and snow will occur mostly during the day Saturday, according to Bowlan's report.

A strong storm system will move into the area Saturday morning, bringing chances for snow across much of the area with the best chance for accumulating snow across the higher terrain of Northwest Arkansas. Parts of Carroll and Madison counties could see over 3 inches of snow. Strong wind gusts will also accompany the snowfall, which would make travel hazardous at times, according to Bowlan.

The front is moving down from the north from Minnesota and Iowa.

Jay Frasier with the Benton County Road Department said today will be used to prep for the weather. Not really knowing what to expect, Frasier said the county will make sure its six dump trucks are ready in case things take a turn for the worse. The county also has eight sand/salt trucks called "fast movers" and 18 road graders that can used as plows if needed, he said.

Since it's supposed to rain before any snow falls, treating roads is not an option because it would wash away, he said.

Rain is likely before 7 a.m. Saturday, then snow likely, possibly mixed with rain. It is expected to be cloudy with a high near 38. The chance of precipitation is 70%. Saturday night's forecast calls for snow likely, possibly mixed with rain before 7 p.m., then a chance of snow between 7 p.m. and 1 a.m. Sunday. The low is expected around 17 with the chance of precipitation at 60%, according to the weather service.

The weather service noted the forecast will continue to change as Saturday approaches.

"It changes, little shifts in the track," Bowlan said. "We continue to watch it."