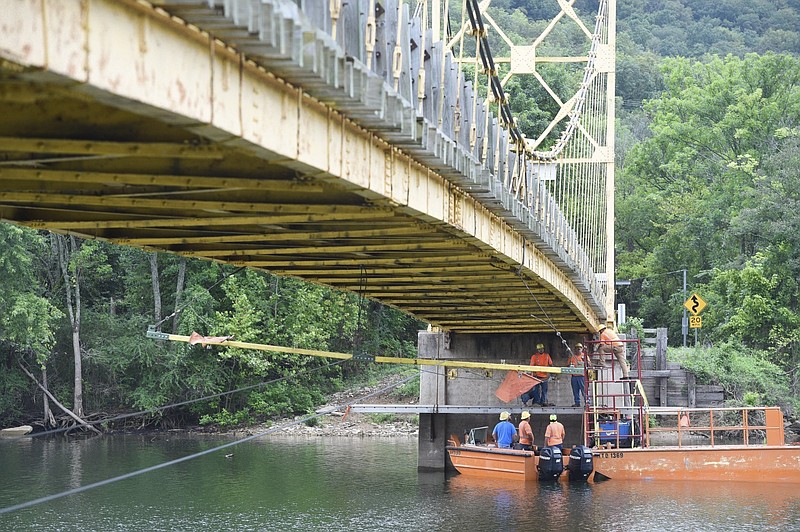 Bridge repairers begin to install a safety system in preparation to replace the old deck of the Beaver Bridge over the White River in Beaver, north of Eureka Springs, in this Sept. 3, 2020, file photo. The Arkansas Department of Transportation was installing cables as part of a project to repair the decking and rails of the 1943 bridge. (NWA Democrat-Gazette/Charlie Kaijo)

The U.S. Department of Transportation on Friday launched its nationwide $27.3 billion bridge improvement program, calling it the single largest dedicated bridge investment since construction under the interstate highway system began more than 65 years ago.

The money includes $278.7 million for Arkansas over five years, or $55.7 million annually in that span, according to the agency.

The bridges in poor condition represent 5.1% of the state's inventory of 12,946 bridges on state highways, county roads and city streets, according to a database maintained by the U.S. Transportation Department. Of those, 6,391, or just under 50%, are in good condition.

The program is part of the $1.2 trillion Bipartisan Infrastructure Investment and Jobs Act that President Joe Biden signed into law two months ago.

The act will provide a total of $4.16 billion in state formula funds for highway, bridge and transit investment in Arkansas over the next five years, including a 33% funding increase in the federal fiscal year ending Sept. 30, according to an analysis of the act by the American Road and Transportation Builders Association.

An Arkansas Department of Transportation spokesman said the department was hesitant about speaking in great detail on bridge funds and other money it will receive under the act until agency officials had more time to review the details.

"We are pleased that the IIJA will provide more federal [money] for Arkansas, including a line item for bridges," Dave Parker, the department's top spokesman, said in an email. "But it is still undetermined how much total additional funding we will receive from the bill."

The federal largesse is on top of the new state money the agency is expected to receive under Issue 1, approved by voters in November 2020. The initiative makes permanent the temporary 0.5% statewide sales tax, the proceeds of which are devoted to road and bridge work, including a push to eliminate any weight restrictions on state bridges.

"This additional funding, regardless of the total net amount received, will help us fulfill the commitments we made to the citizens through the Renew Arkansas Highways program funded by the passage of Issue 1," Parker said. "Specifically, this will help us address our weight-restricted bridges in the highway system for the next 10 years.

Nationwide, the Bridge Formula Program is expected to help repair approximately 15,000 bridges, according to the federal agency. In addition to providing funds to states to replace, rehabilitate, preserve, protect and construct bridges, the Bridge Formula Program has dedicated funding for tribal transportation facility bridges, as well as "off-system" bridges, which are generally locally-owned and not in the federal-aid highway system.