U.S. tells states to put $27.3B to use repairing old bridges 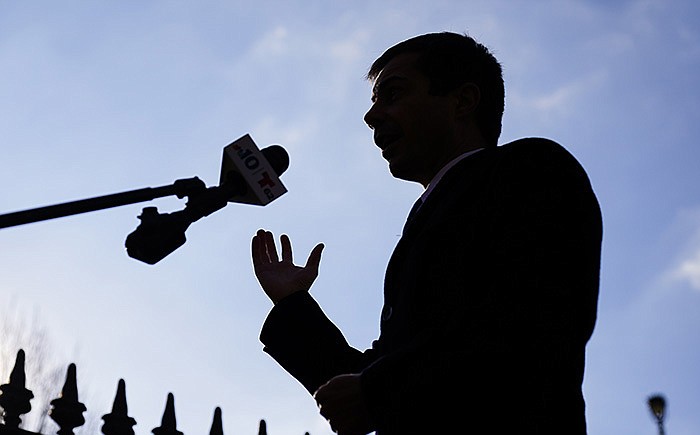 The Biden administration Friday urged states to get to work getting thousands of aging bridges up to par, improving safety and uncorking bottlenecks, with the help of $27.3 billion in new federal aid.

The White House announced the allocation to mark 60 days since President Joe Biden signed the $1 trillion infrastructure bill. The bridge program is one of the largest new sources of federal spending in the package and one that encapsulates its bipartisan appeal.

Bridges serve as key economic links and stand out as icons or bugbears in communities across the country, with politicians regularly invoking the idea that they are "crumbling" to argue for new spending. The administration said the funding represents the biggest federal investment in bridges since creation of the interstate highway system.

"When we invest in infrastructure, we're really investing in opportunity," Biden said in announcing the funding. "These are investments that will build a better America. It sounds like hyperbole, but it's real."

"One man told me that the bridge he traveled on every day is a tragedy waiting to happen," the president said. "One woman wrote that a bridge near the center of her town had to be closed, and now drivers and tourists bypass downtown ... devastating local businesses. And one person wrote to me to say, quote, 'This is your chance to show the people in my area that they matter to you.' End of quote. I hear you."

The five-year program aims to repair and upgrade roughly 15,000 bridges. The government will release nearly $5.5 billion this fiscal year.

States receive most federal transportation aid in proportion to their size, but the bridge funds are different, allocated mostly based on how much it would cost to fix the crossings that are in the worst condition.

Some states are in line to secure an outsize amount. Louisiana, for example -- where Biden traveled last year in an early effort to sell his infrastructure proposals -- has about 1,600 bridges in poor condition and will get $1 billion. The sum represents a significant boost in federal transportation aid to the state.

About half of the money will be shared by 10 states. Pennsylvania, with more than 3,300 bridges in poor condition, will get $1.6 billion, while California is in line to receive $4.2 billion. Twenty-three states will receive the minimum allotment of $225 million over five years.

[Video not showing up above? Click here to watch » arkansasonline.com/115bridges/]

The trade group American Road and Transportation Builders Association said last year that there were about 220,000 bridges nationwide that need repair and almost 80,000 that need overhauling -- a job that it said would have taken 40 years without additional money.

The condition of the nation's bridges has generally improved in recent years, and even those rated in poor condition don't necessarily pose a danger to travelers. But when bridges have to close, it can snarl entire cities.

Last year, as lawmakers debated the infrastructure package, inspectors found a previously overlooked crack in a bridge at Memphis. Its closure disrupted the region for weeks and prompted a visit by Transportation Secretary Pete Buttigieg.

The infusion of money should help state transportation departments build on progress, but it won't benefit every aging bridge. The road builders group analyzed federal data and found that repairing or replacing the 45,000 bridges most in need of work would cost about $42 billion.

The Federal Highway Administration issued guidance Friday to encourage states to use the money on repairs, but they also are free to use it for new bridges. The guidance also encourages states to build with resilience against climate change and equity in mind.

As with most federal transportation spending, it will largely be up to the states to determine how to use the money and to hire contractors to undertake the work. The money is not likely to flow to specific projects immediately because it will take time for transportation departments to ramp up, while some might need environmental or other reviews. Still, officials have begun to consider where to deploy the new funding.

Alexis Campbell, a spokeswoman for the Pennsylvania Department of Transportation, said the agency began talking with regional planners last year about how they could make use of the money if the infrastructure bill passed. The result was an 11-page wish list of potential projects that could either get off the ground or be sped up, a tally that included dozens of bridges.

Officials are looking at a $129 million project to replace a 90-year-old span that carries Philadelphia's Market Street across the Schuylkill River and a $239 million pair of interstate bridges in Pittsburgh, along with numerous smaller plans.

"These still need to go through the normal planning process, but this shows some examples of projects that could proceed," Campbell said.

Iowa, whose bridges the road builders association ranked second-worst in the nation last year, is expected to get $430 million.

Stuart Anderson, a spokesman for the state's transportation department, said how to use the new funding is being discussed by local leaders and planners in consultation with the state transportation commission.

"The priority will be to reduce the number of poor-condition bridges in the state," Anderson said.

"Today's announcement is great news for West Virginia and will provide states not only with historic formula funding for bridges, but also the long-term certainty they need to plan and complete projects," said Capito, the top Republican on the Environment and Public Works Committee, which sets road and bridge policy.

The money is aimed not only at large projects, but also smaller bridges off main highways that in the past might not have received federal dollars. For those projects, the federal government will cover the full cost rather than requiring the 20% match that states generally must provide. And about $800 million is set aside for projects in tribal areas.

Matthew Chase, executive director of the National Association of Counties, said the money is welcome because local governments are responsible for nearly 240,000 bridges, yet "the costs of maintaining this essential infrastructure often outstrips our local resources."

The infrastructure package includes another $12.5 billion for bridges that would be given to states and local governments through a competitive process. That money could be put to use tackling some of the biggest spans, like the Brent Spence Bridge between Kentucky and Ohio. It's not clear when that money might become available.

"There's a lot of talk about disappointments of things we haven't gotten done -- we're going to get a lot of them done, I might add," he said. "But this is something we did get done, and it's of enormous consequence to the country."

The White House issued a fact sheet that details how the administration is preparing to distribute infrastructure funds, including:

• Plans to build out 500,000 charging stations for electric vehicles.

• Plans to disburse $7.4 billion to upgrade water and sewer systems.

• Steps to build out broadband Internet, among other initiatives.

Former New Orleans Mayor Mitch Landrieu is tasked with managing the infrastructure spending. He appeared with Biden on Friday and pledged to "deliver results on time, on task and on budget."

Information for this article was contributed by Ian Duncan of The Washington Post and by Josh Boak of The Associated Press. 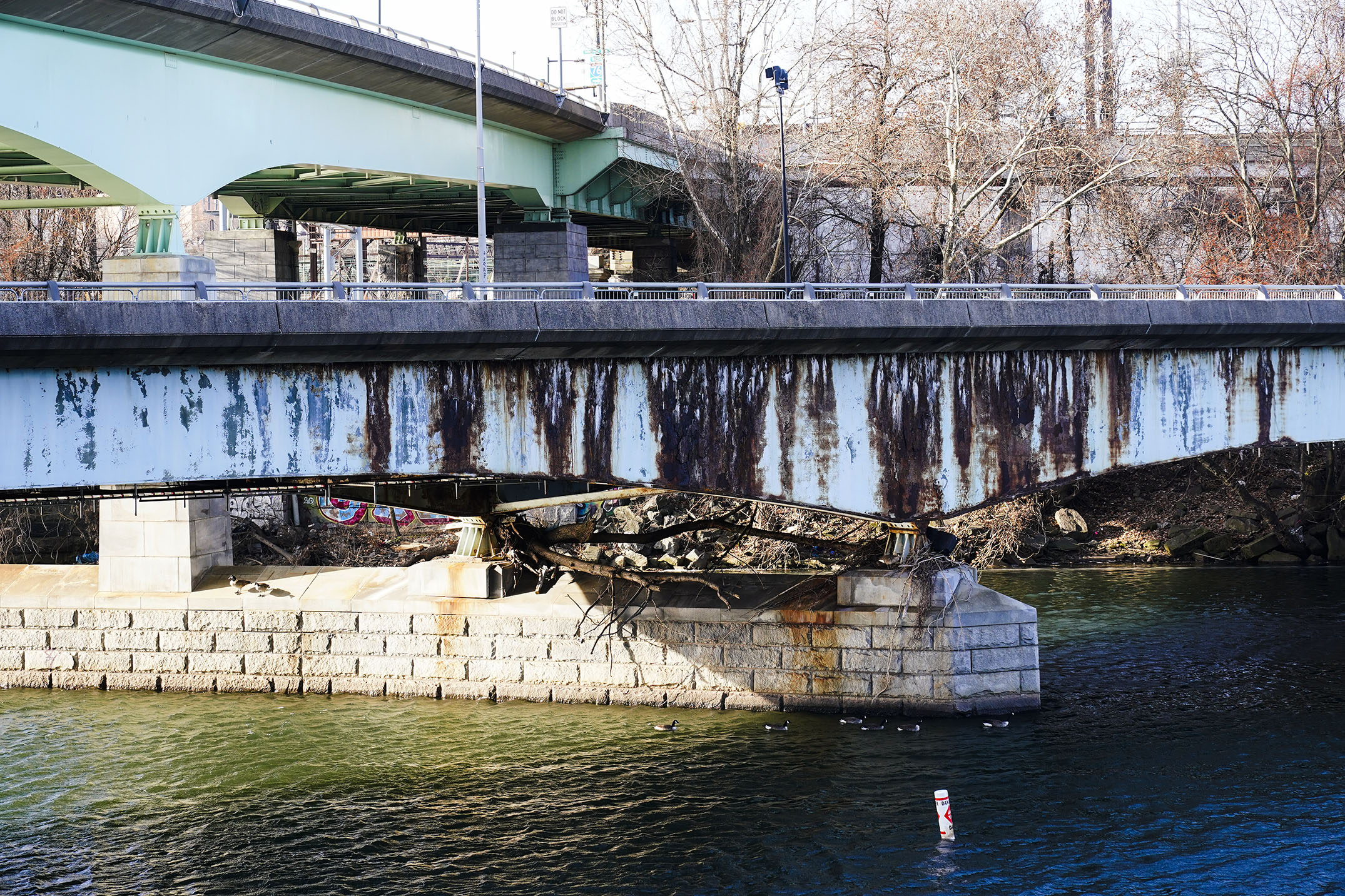 The Martin Luther King Jr. Bridge (lower span) in Philadelphia remains closed to traffic Friday because of repair needs and is one of roughly 15,000 bridges across the country in line for federal upgrade funds. (AP/Matt Rourke)

Print Headline: U.S. tells states to put $27.3B to use repairing old bridges