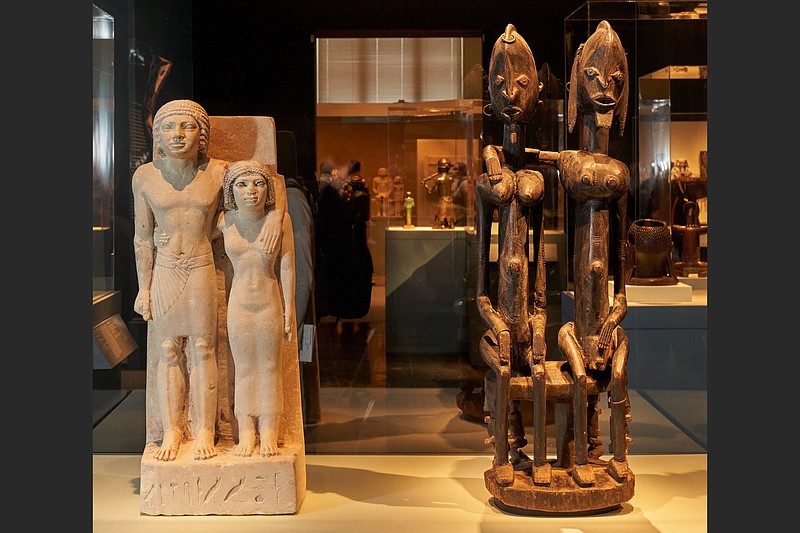 “The King’s Acquaintances Memi and Sabu” from Egypt, ca. 2575-2465 B.C., and “Seated Couple” from Mali, 18th or early 19th century, on display in “The African Origin of Civilization” at the Metropolitan Museum of Art in New York. Holdings from ancient Egypt and sub-Saharan Africa come together in a masterpiece show. (The New York Times/Seth Caplan)

NEW YORK — Object for object, there isn't an exhibition in town more beautiful than "The African Origin of Civilization" at the Metropolitan Museum of Art. Nor is there one more shot through with ethical and political tensions.

The gathering of 42 sculptures in one of the Met's Egyptian galleries unites, for the first time here, pieces from its ancient Egyptian and sub-Saharan African holdings, centuries apart (the earliest sub-Saharan work on view is from the 13th century). The pretext for the display is a practical one. It immediately follows the recent closure for renovation of the Michael C. Rockefeller Wing and its Arts of Africa galleries (the wing is scheduled to reopen in 2024). This is a way to keep some of its treasures on view and to forthrightly acknowledge Africa itself as the wellspring of human culture.

The show comes at a time when the history of African art in Western museums — how it got there, how it's treated — is under scrutiny. The Met's holdings from the African continent have always been installed in two sections located far apart — literally at opposite ends of the Fifth Avenue building — reflecting antiquated, racially biased Western distinctions between "high" culture (Egypt) and "primitive" culture (most of the rest of Africa). The show makes a gesture of unification — though, architecture being destiny, the old division will presumably remain intact on a larger scale within the museum's geography after the Rockefeller wing renovation.

The exhibition also coincides with a moment of international consciousness-raising about Western colonialism in Africa and the predatory realities of much art collecting on the continent. In certain European countries — Belgium, France, Germany — come-lately gestures of restitution are in the works. The Met itself recently returned two of the many Benin sculptures in its holdings to Nigeria. Yet the show makes almost no overt mention of any of this. You have to look at footnote information — provenance citations in object labels — to learn of this larcenous history. 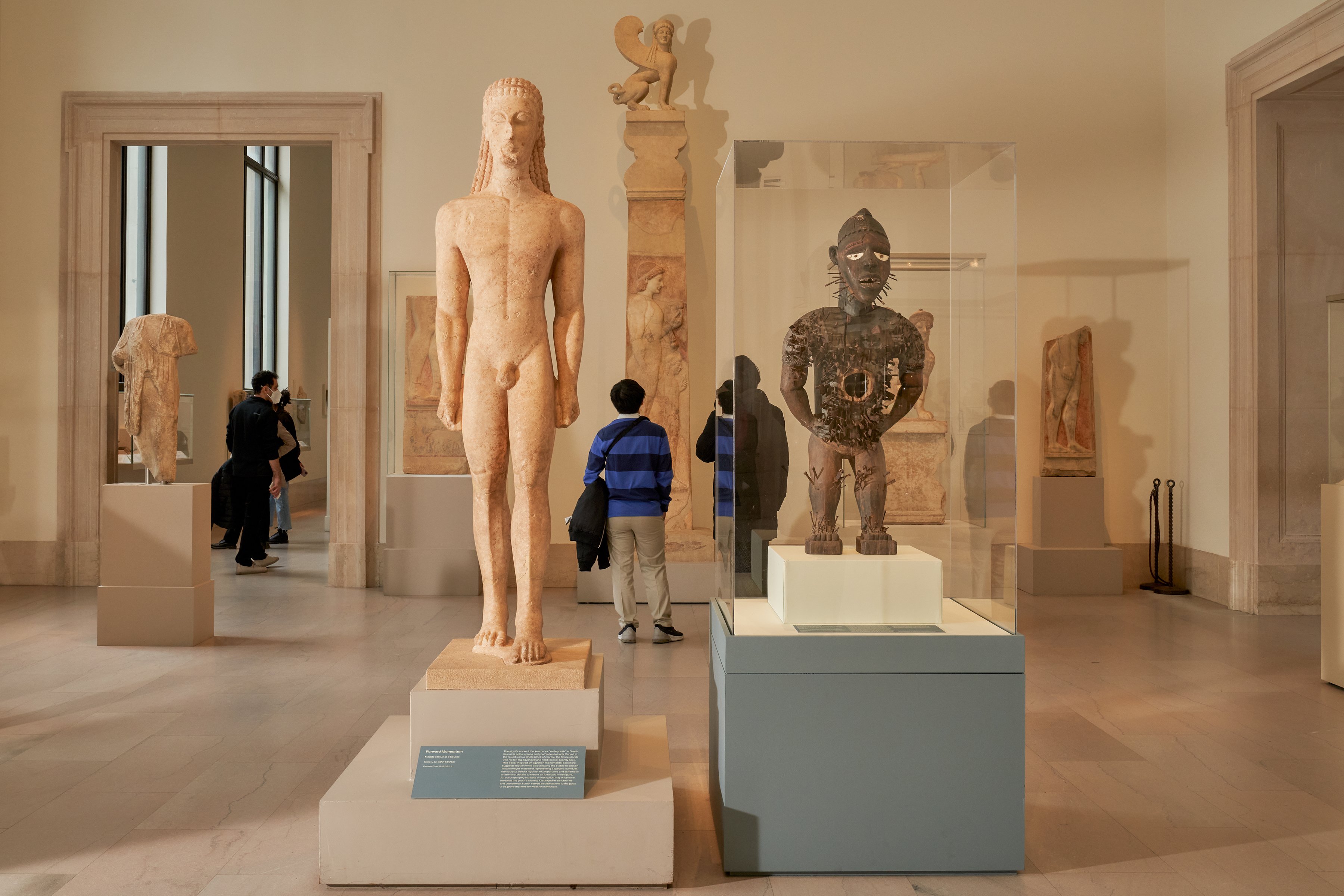 A pair of artworks — a marble statue of a kouros; Greek, ca. 590-580 B.C., and “Mangaaka Power Figure (Nkisi N’Kondi),” 19th century, by a Kongo artist, Democratic Republic of Congo — are on display in the Greek and Roman Galleries in “The African Origin of Civilization” at the Metropolitan Museum of Art. (The New York Times/Seth Caplan)
Instead, its organizers — Alisa LaGamma, curator in charge of the department of the arts of Africa, Oceania, and the Americas; and Diana Craig Patch, curator in charge of the department of Egyptian art — have given us a different, smaller history of the acquisition of art from Africa by the Met itself, and the changes in cultural and aesthetic perception that history implied.

Because the ancient Greeks admired Egyptian dynastic art and learned from it, the Met's Hellenophilic founders admired it too. At the same time, to them, almost any other art from Africa wasn't "art" and belonged in the American Museum of Natural History across Central Park. A change in institutional attitude only manifested itself starting in the late 1960s, when the Met began acquiring Nelson A. Rockefeller's Museum of Primitive Art collection and, in 1982, built a wing to hold it.

Through acquisition dates on labels, you can trace what objects, early and late, came into the Met's collections when, and thereby trace the progress of the museum's investment in presenting and promoting the art of Africa. But the curators have embedded this history in an old-style "masterpiece show," composed of a greatest-hits selection from the separate African collections they're in charge of.

And what a selection it is! Shoulder-to-shoulder astonishments, presented in compare-and-contrast pairs. Wherever you turn, in the close-quarters treasure chest installation, you're zapped. 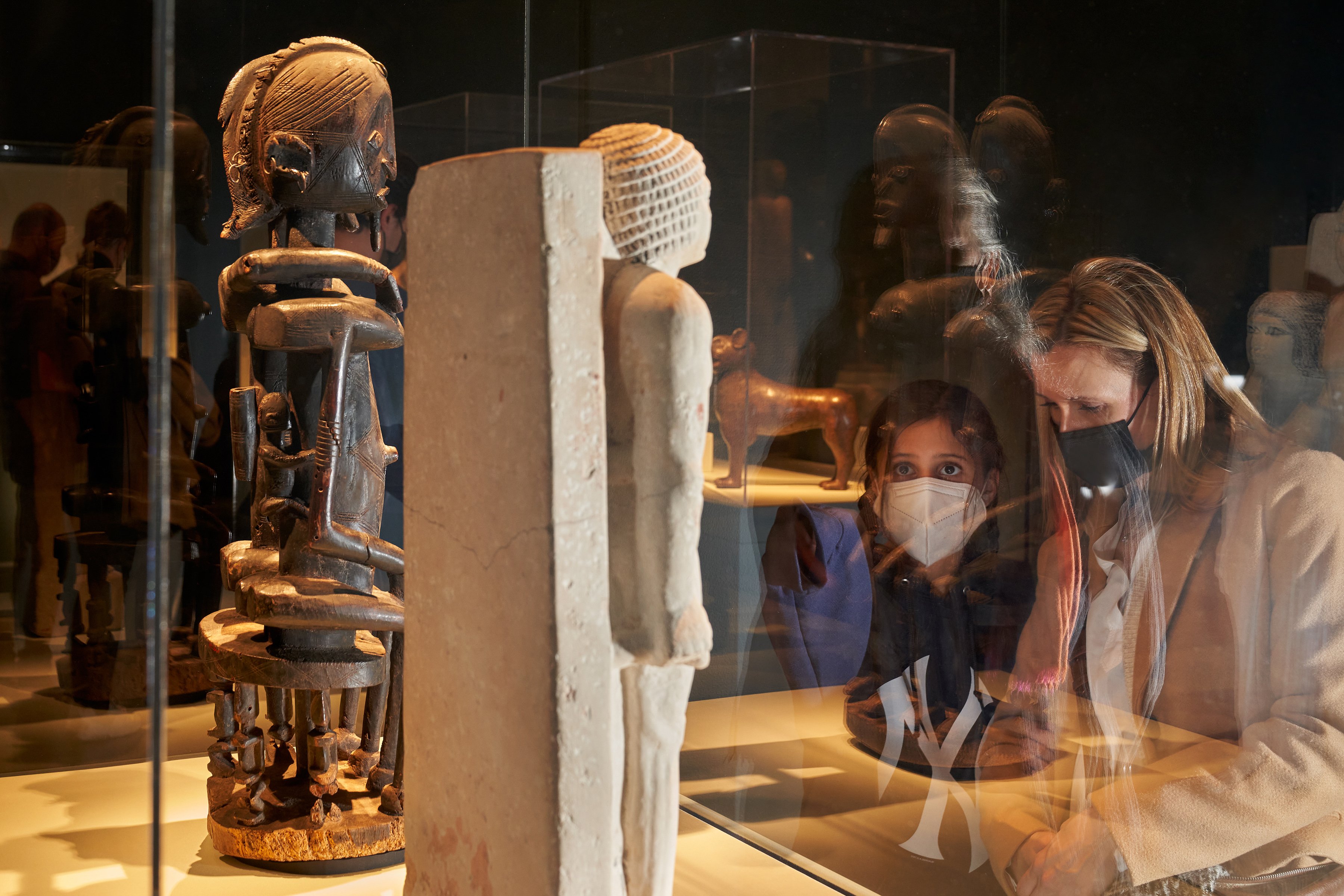 Visitors view “Seated Couple” from Mali (left) and “The King’s Acquaintances Memi and Sabu” from Egypt, in “The African Origin of Civilization” at the Metropolitan Museum of Art. (The New York Times/Seth Caplan)
PRIMARY PAIRING

Under the label "Primary Pairing" are two sculptures of roughly the same size, around 3 feet tall, separated by millennia. In a high-relief Egyptian limestone carving, dated between 2575-2465 B.C., a man and woman named Memi and Sabu stiffly face forward, as if freezing for a photo. They're youngish, buff and alert, and the man is dominant. A head taller than his mate, his left arm is around her shoulder; his hand covers her breast.

The other sculpture, free-standing, was cut from a single block of wood by a Dogon artist in Mali in the 18th or early 19th century. Here gender-based hierarchies of size are balanced out. The figures are almost equal in height, and their features matched with delicate, nearly mathematical precision, right down to the attributes that define their roles in life: The quiver of arrows strapped to the man's back and the bundled baby the woman carries on hers are also of equal size.

The Met's early standards of sculptural beauty were set by a Western "classical" tradition, in which the art of ancient Egypt was awarded honorable mention. My standards are shaped by a lifetime's exposure to other, different traditions, some still packaged as "primitive." But in the case of these two African objects, "more beautiful," as a comparative category, just doesn't apply.

Anyway, comparisons across cultures can be slippery unless based on confirmable data, which is not the case here. Nowhere, for example, do the curators try to demonstrate that the art of ancient Egypt served as a direct source for 19th- and 20th-century art from Ghana, Mali or Sudan. And many of the conceptual themes under which objects have been placed — "Commemorating Beauty," "Awe-Inspiring Forces," "Mastery of Metals" — are so loose as to accommodate almost anything.

What the pairings are really, and effectively, based on is morphology, shape, form, visual motif — this-is-like-that — which immediately pulls the eye into play.

You don't need any special knowledge to see that a fistlike figure of a lion cub, chiseled and scraped from white quartzite in early dynastic Egypt and palpitating with life, is a miracle of human-to-animal empathy. Or that a sleek brass Edo leopard (1550-1680 A.D.), cast in a Benin court atelier in what is now Nigeria, is a quadruped embodiment of royalty. 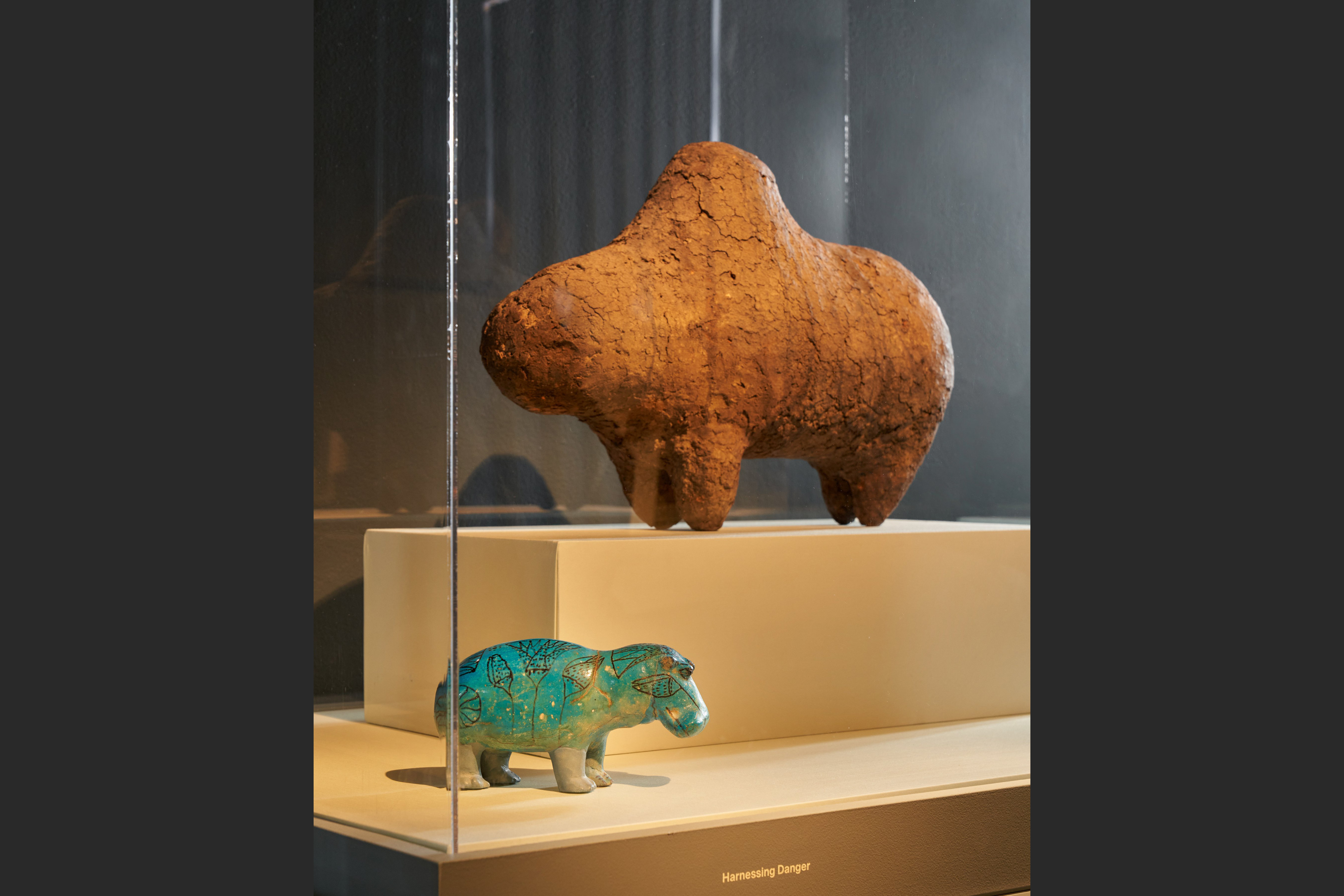 A hippopotamus-shaped power object (Boli) from 20th-century Mali molded from earth mixed with alcohol and blood is displayed along with “AFigurine of A Hippopotamus” from Egypt, ca. 1961-1878 B.C. (The New York Times/Seth Caplan)
POWER OBJECT

A hippopotamus-shaped power object from 20th-century Mali molded from earth mixed with alcohol and blood looks enough like a hand grenade to merit the theme it appears under, "Harnessing Danger." But what about the cute little faience hippo in the same vitrine? Made in Middle Kingdom Egypt, it has been affectionately known as "William" to generations of Met visitors. From a label you learn that this tomb guardian was considered so aggressive in his protective zeal that his legs were snapped off before burial lest he harm his human owner in the afterlife. (Three of the legs he has now are modern replacements.)

Under the category "Sublime Pillows," you find an Egyptian alabaster headrest, as luminous as a lotus, made for eternal slumbers, and a 19th-century wooden one from the Congo designed to protect a sleeping woman's hairdo. (The artist who carved it is known as the Master of the Cascade Coiffure, and the 'do is reflected in the headrest's shape.)

The most arresting images, though, are of bodies and faces: human, divine or both.

Two tall, wood-carved male nudes, one from Old Kingdom Egypt, the other 19th-century Sudan, are memorial figures of equal gravity, as noble as monarchs, as lithe as dancers. Certain sculptures may have been conceived as portraits, though the names attached to them are lost, as in the case of the fragmentary head of an Egyptian queen cut from honey-yellow jasper. And some likenesses have survived with identities intact. A 16th-century ivory pendant — an icon of the Rockefeller Wing — depicts the mother and chief adviser of a Benin king. The time-scarred quartzite face of an aged man with downturned lips and heavy eyes belongs to Egyptian king Senwosret III, though it could also very easily be a snapshot of that sad man sitting across from you on the subway last night.

Technically, the show extends into the larger museum, with a few strategic placements of African works. A wide-eyed Kongo power figure, devoted to hunting down evil, disturbs the peace of the Greek and Roman galleries. A flock of Ethiopian processional crosses levitate in the Medieval Hall. Upstairs in the European paintings galleries, a wood-carved Malian maternal figure, honorifically referred to as "Gwandansu," stands near Jusepe de Ribera's monumental 1648 painting of "The Holy Family with Saints Anne and Catherine of Alexandria."

Setting up such points of light across cultures is important as new audiences develop and "familiar" and "unfamiliar" start to change place. The day will come — is it already here? — when a Kongo power figure is as familiar to a Met audiences as a Greek kouros, and "Gwandansu" helps explain what a "Madonna" means. The idea of beauty can be embracive and still leave difference intact. 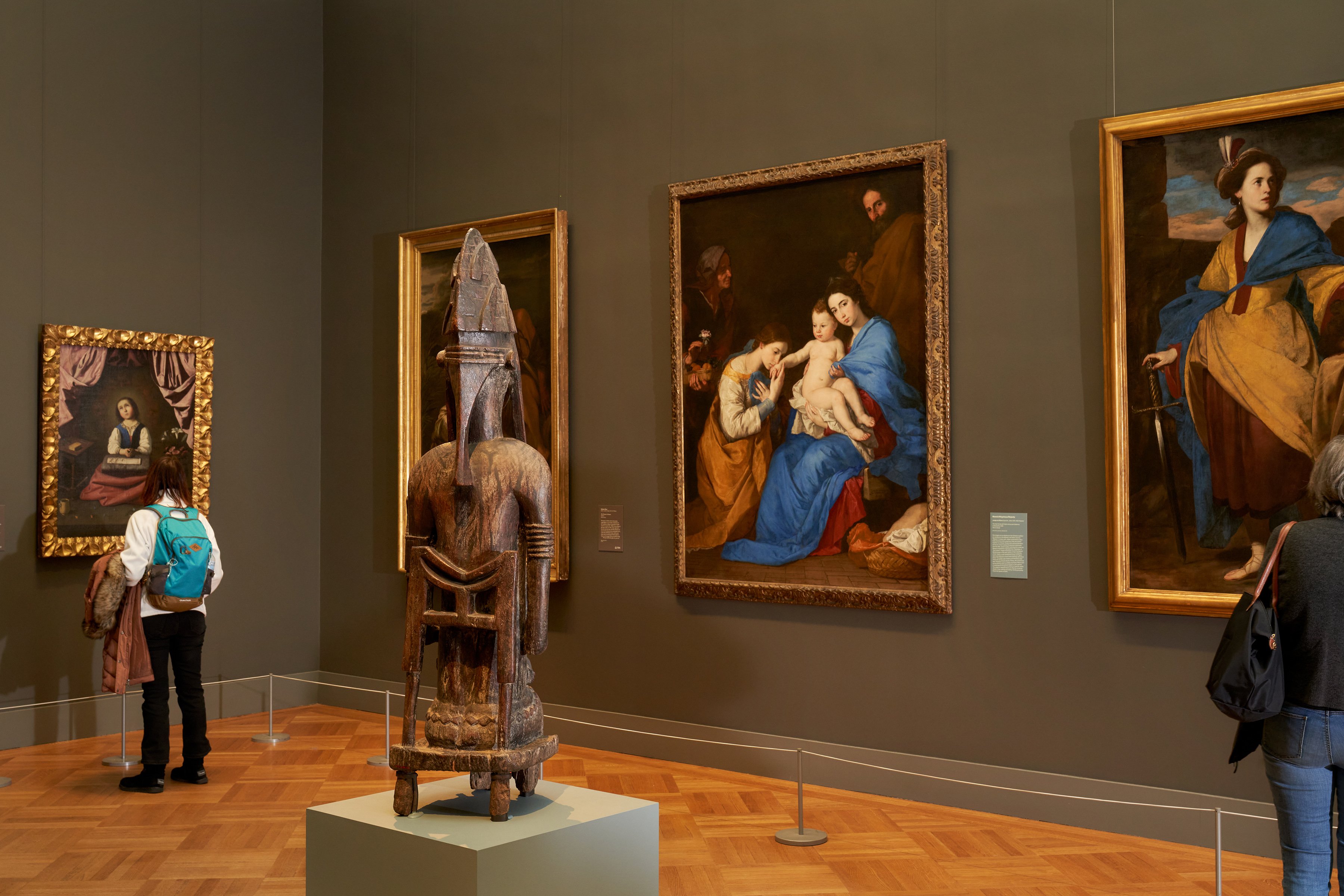 Figures on display in “The African Origin of Civilization” at the Metropolitan Museum of Art: “The Holy Family with Saints Anne and Catherine of Alexandria,” by Jusepe de Ribera, 1648 (center back) with “Gwandansu,” 15th-20th century, by a Bamana artist from Mali (foreground). (The New York Times/Seth Caplan)
VALUE ... AND PROBLEMS

Toward this, "The African Origin of Civilization" certainly has value. But as a preview of the revamped Michael C. Rockefeller Wing, it also has problems. It's not enough for the wing to simply be redesigned and rearranged. It has to be conceptually rethought, on every level, which won't be an easy task for the Met, which is, like all our big, traditional museums, profoundly conservative.

In this rethinking, it will be vital to incorporate Egypt into the "arts of Africa" story as the current exhibition does. And it will be necessary to politicize the art historical narrative. The Met's African collection (and Oceanic collection and Americas collections) is circumstantially about colonialism, about how art has been moved — by aggression or agreement, with one often shading into the other — out of its place of origin.

There's no ethical way, for example, that an account of the murderous 19th-century British military occupation of Benin can be smoothed over, never mind left out. (To get a full sense of its realities, I recommend Dan Hicks' 2021 book "The Brutish Museums: The Benin Bronzes, Colonial Violence and Cultural Restitution.")

And it will be important to emphasize the degree to which much of the art of sub-Saharan Africa in the collection is inherently, and often forthrightly, about ethics, about the workings of social justice; about right living, personally, socially, and spiritually; about the quest for balance in the natural world, all evident in the power figure's prosecutorial vigor, in Gwandansu's mountainous calm and in the sun-pointing, heaven-seeking horns of an antelope-shaped harvest mask from Mali.

These are ideas we badly need instruction in. And as the Met's current show demonstrates, they are nowhere on Earth taught with more head-turning, eye-locking beauty than in the arts of Africa.