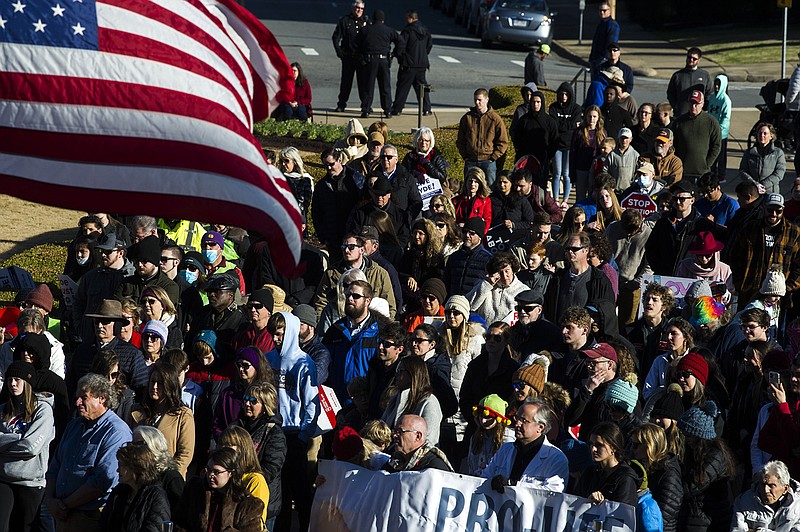 People listen at the steps of the Arkansas State Capitol as speakers discuss abortion during the 44th Annual March for Life at the Arkansas State Capitol on Sunday, Jan. 16, 2022. The march marks the 49th anniversary of the January 22, 1973 Roe v. Wade Supreme Court decision that legalized abortion in the United States. See more photos at arkansasonline.com/117march/ (Arkansas Democrat-Gazette/Stephen Swofford)

Hundreds of anti-abortion activists gathered Sunday in front of the state Capitol in Little Rock during the 44th annual March for Life.

Speakers noted that this is a critical time in the abortion debate, as the Supreme Court is expected to rule in the coming months on a Mississippi law that raises the possibility of overturning Roe v. Wade.

"Arkansas has stood proudly with my friend, Lynn Fitch, attorney general of the great state of Mississippi, and she took up the Dobbs case to the United States Supreme Court," Arkansas Attorney General Leslie Rutledge told the crowd. "And do you know why? Because Arkansas is God's country, and in God's country, we defend life."

From the back of the mostly quiet crowd, a child yelled in response, "This is God's country."

His parents smiled at their son's participation.

Oral arguments in the case of Dobbs v. Jackson Women's Health Organization, concerning the 2018 Mississippi law that would ban nearly all abortions after 15 weeks of pregnancy, was heard by the Supreme Court in December. It is believed that a decision on the case could be made later this year.

Arkansas legislators in 2021 enacted a series of laws targeting abortion. One of those measures, which would ban nearly all abortions, was temporarily blocked by a federal judge in July.

Arkansas Gov. Asa Hutchinson said he has been going to the marches since President Ronald Reagan was in office in 1986. He said he's often been criticized for attending the events.

"But I've been here time and time again," Hutchinson told the crowd. "You've been here. Guess what? Today, your message, your work is reflected in these pro-life statewide offices and General Assembly members that make a difference for you every day."

"We are winning the battle of the public mind," Hutchinson said. "It's through our optimism, through science, through medicine that teaches the life that is in the womb, and now we have a chance -- because the Mississippi case that is before the United States Supreme Court -- to revoke, reverse, Roe v. Wade."

Hutchinson said he was proud to sign on to a friend-of-the-court brief with 10 other anti-abortion governors supporting the Mississippi law.

"My question is, where were the other governors?" Hutchinson said. "But perhaps it makes a difference, perhaps we can win that case."

The Arkansas Coalition for Reproductive Justice released a statement criticizing the rally for happening as covid-19 numbers spike.

"The Arkansas Coalition for Reproductive Justice (ACRJ) firmly denounces the March for Life Rally again being held during a pandemic that has killed over nine thousand Arkansans and is continuing to wreak havoc on our communities," the statement said.

"It is the antithesis of being pro-life to join a dangerous event in person without any regulations to prevent the event from further contributing to an out-of-control surge of virus cases in our state," coalition President Karen Ricketts said in the statement. "Arkansas is not a pro-life state, and this event promotes forced birth."

Ricketts said a "pro-life" state would pass legislation that helps Arkansans who are struggling.

"For generations, the U.S. Supreme Court has recognized that abortion is essential to a person's participation in the social and economic life of the nation -- and generations have relied on this right to shape their lives and futures," the statement said. "Unfortunately, for several years those rights have been under attack in Arkansas and across the country. Our right to abortion should not be up for debate: making personal decisions about our bodies and our futures is central to every person's liberty."

During the rally Sunday, Lt. Gov. Tim Griffin said that 10 years ago, he never expected the state and nation to be so close to overturning Roe v. Wade.

"Make no mistake about it, the pro-life army is on the march, and we are winning battle after battle," Griffin said.

CORRECTION: Arkansas Attorney General Leslie Rutledge spoke Sunday during the 44th annual March for Life rally at the state Capitol in Little Rock. An earlier version of this story incorrectly identified Rutledge’s first name. Also during the rally, Arkansas Lt. Gov. Tim Griffin said: “Make no mistake about it, the pro-life army is on the march, and we are winning battle after battle.” A word was left out of Griffin’s quote in the article. 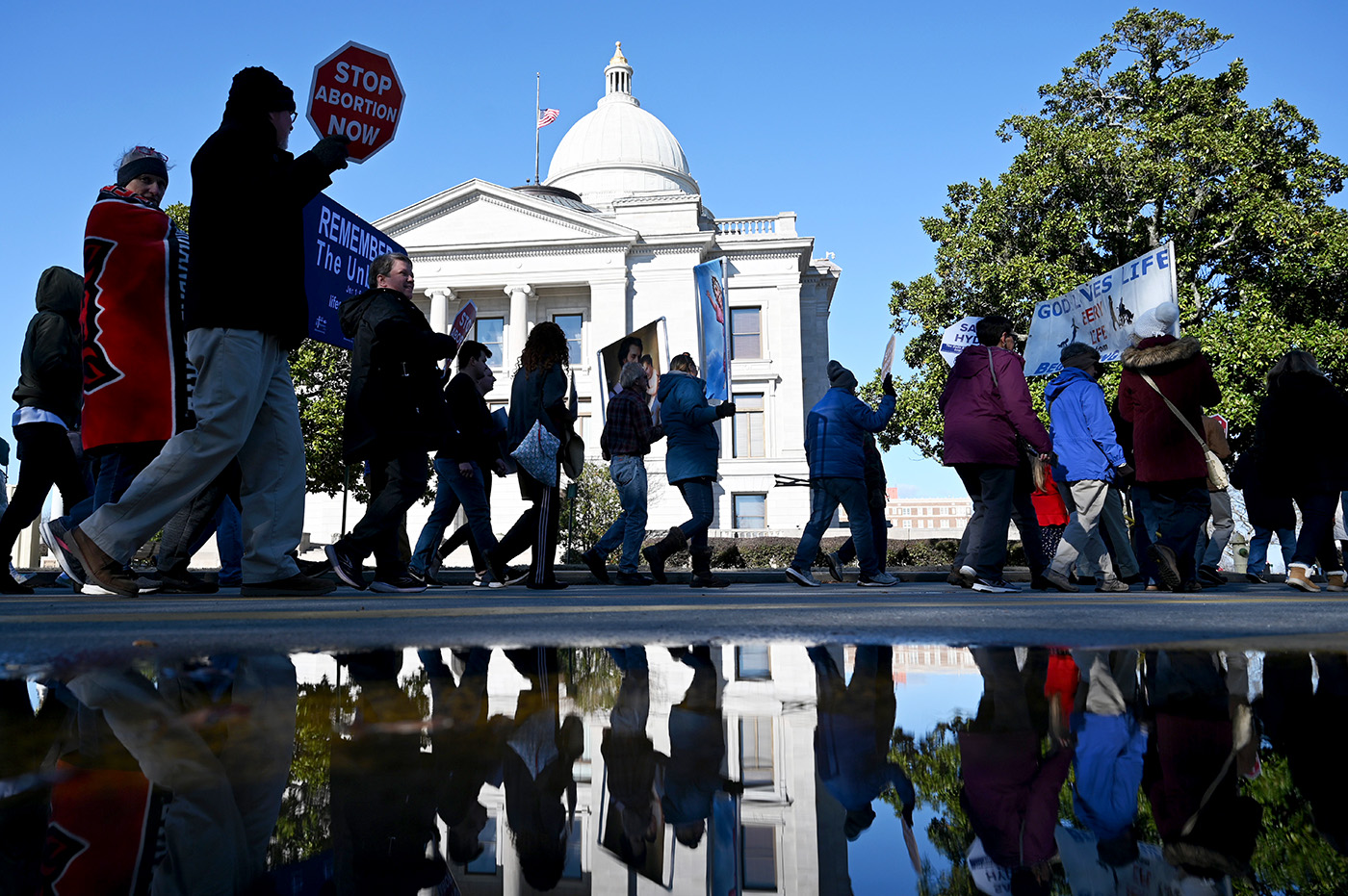 People march to the steps of the Arkansas State Capitol at the start of the 44th Annual March for Life on Sunday, Jan. 16, 2022. The march marks the 49th anniversary of the January 22, 1973 Roe v. Wade Supreme Court decision that legalized abortion in the United States. See more photos at arkansasonline.com/117march/ (Arkansas Democrat-Gazette/Stephen Swofford)