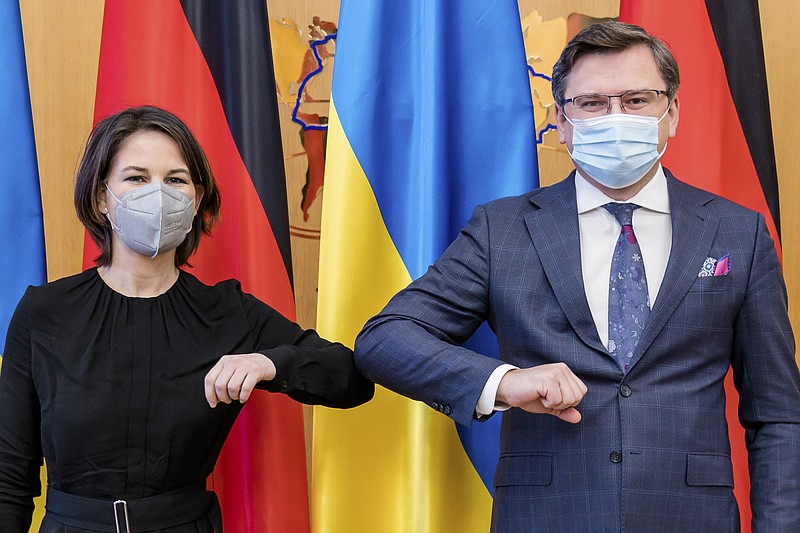 Meanwhile, a bipartisan group of U.S. senators is in Ukraine to show solidarity with the Eastern European country.

The White House said Friday that U.S. intelligence officials had concluded that Russia had already deployed operatives to rebel-controlled eastern Ukraine to carry out acts of sabotage and blame them on Ukraine in a "false-flag operation" to create a pretext for possible invasion.

He reaffirmed that Russia expects a written response this week from the U.S. and its allies to Moscow's request for binding guarantees that NATO will not embrace Ukraine or any other former Soviet nations, or station its forces and weapons there.

Washington and its allies rejected Moscow's demands during last week's Russia-U.S. negotiations in Geneva and a related NATO-Russia meeting in Brussels, which were held as an estimated 100,000 Russian troops with tanks and other heavy weapons gathered near Ukraine in what the West fears might be a prelude to an invasion.

[Video not showing up above? Click here to watch » arkansasonline.com/118invade/]

Amid the troop buildup, Russia in recent weeks has held a series of war games in regions that border Ukraine. On Monday, the military announced the launch of another exercise involving armored units stationed in the western part of Russia that includes 300 combat vehicles.

Speaking Monday on a visit to Kyiv, German Foreign Minister Annalena Baerbock warned that "any further escalation would carry a high price for the Russian regime -- economic, political and strategic" -- and emphasized the need to continue negotiations.

"We are prepared to have a serious dialogue with Russia, because diplomacy is the only way to defuse this highly dangerous situation," she said.

Unknown hackers attacked Ukrainian government websites Friday, rendering some of them temporarily inaccessible, which included a warning posted on some sites to "be afraid, and expect the worst."

On Sunday, Ukraine's Ministry of Digital Transformation posted a statement on its website accusing Russia of being behind the attacks, which it said was part of a "hybrid war" against Ukraine.

Baerbock said Germany has offered to send cybersecurity specialists to Ukraine to help investigate the attacks. At the same time, she said Germany hasn't changed its refusal to provide weapons.

"We made clear that we will do everything to avoid escalating the crisis," she said.

Ukrainian officials have warned that Russia could launch an attack from various directions, including from the territory of its ally Belarus.

Belarusian President Alexander Lukashenko, who has increasingly relied on the Kremlin's support amid Western sanctions over a brutal crackdown on domestic protests, said Russia and Belarus will hold military drills next month.

Lukashenko said the maneuvers will be conducted on Belarus' western border and also in the country's south, where it borders Ukraine. Belarus Security Council Secretary Alexander Volfovich said Monday that Russian troops had already started arriving in the country, according to the BELTA news agency.

Russia has denied having plans to attack its neighbor and in turn accused the Ukrainian leadership of hatching plans to use force to reclaim control of Russian-backed rebel-held territories in eastern Ukraine. Ukrainian authorities have denied it.

Russia annexed the Crimean Peninsula from Ukraine in 2014 after the ouster of Ukraine's Moscow-friendly leader and also threw its weight behind a separatist insurgency in eastern Ukraine. More than 14,000 people have been killed in nearly eight years of fighting there.

Russian President Vladimir Putin has warned that Moscow will take unspecified "military-technical measures" if the West stonewalls its demands.

Deputy Foreign Minister Sergei Ryabkov, who led the Russian delegation at the talks with the U.S. in Geneva, said last week that he would "neither confirm nor exclude" the possibility of Russia sending military assets to Cuba and Venezuela if the U.S. and its allies don't curtail their military activities on Russia's doorstep. U.S. national security adviser Jake Sullivan has dismissed the comments as bluster.

Asked Monday about the possibility of Russian missile deployment to Cuba and Venezuela, Kremlin spokesman Dmitry Peskov told reporters that "Russia is thinking about how to ensure its security in the context of the current situation."

The seven U.S. senators visiting Ukraine held a series of meetings in Kyiv with President Volodymyr Zelenskyy and top officials in his government Monday.

"Our bipartisan congressional delegation sends a clear message to the global community: The United States stands in unwavering support of our Ukrainian partners to defend their sovereignty and in the face of persistent Russian aggression," said Sen. Jeanne Shaheen, D-N.H.

Sen. Rob Portman, R-Ohio, said in a statement that as Ukraine "continues to defend its territorial integrity against an increasingly aggressive Russia, while also striving to enact critical domestic reforms to solidify its democracy -- it is more important than ever that the U.S. support Ukraine in its efforts."

The Biden administration and lawmakers from both parties have become increasingly concerned in recent weeks that Russia may be preparing to invade Ukraine.

Senate Democrats, with the backing of President Joe Biden, unveiled legislation last week that would impose sanctions on Putin and other top Russian government and military officials and key banking institutions if Moscow engages in hostilities against Ukraine.

However, a proposal by Sen. Ted Cruz, R-Texas, to sanction entities involved in Russia's Nord Stream 2 pipeline, an effort to pressure Russia not to move on Ukraine, was voted down Thursday. The White House opposed the bill, saying it would "undermine unity" among European allies at a sensitive time.

Also Monday, Ukraine's former President Petro Poroshenko returned to his home country to face treason charges that he says are politically motivated -- a standoff that observers say risks dangerously dividing Ukraine while Russian forces are massing on the border.

Poroshenko arrived on a flight from Warsaw to Kyiv after a monthlong absence. He was greeted by thousands of vocal supporters, some holding signs saying, "Keep calm, I'll be back."

He appeared energized by the reception, launching into a lengthy speech that called for unity in the country amid growing tensions with Moscow, but he was also sharply critical of his political opponent, Zelenskyy, who beat Poroshenko by a landslide in the 2019 elections.

"We are not here to protect Poroshenko, but to unite and protect Ukraine," Poroshenko said.

At the same time, Poroshenko listed what he calls the Zelenskyy administration's failures, including the decision to open a treason case against him -- charges that he denies and instead accuses his opponents of committing.

"We will show that they are committing treason against the state, at the moment when Ukraine needs unity to strongly resist the actions of Putin," he said.

Poroshenko is under investigation after accusations that he facilitated coal purchases for government enterprises from mines under the control of Moscow-backed insurgents in eastern Ukraine. Ukrainian officials maintain that the coal purchases helped finance the militant forces.

Among Ukrainians, Poroshenko is sometimes called the "Chocolate King" because he is one of the country's richest men from his confectionary business, Roshen. His fortune is estimated at close to $1 billion.

Authorities have frozen his assets as part of their investigation, and he could face a sentence of up to 15 years.

After returning Monday, Poroshenko appeared at a hearing in downtown Kyiv, to decide whether he would be placed in custody as the investigation continues. The hearing adjourned late Monday with no decision, and the ruling was postponed to Wednesday.

As Poroshenko sat at his custody hearing -- and hundreds of his supporters noisily gathered outside the courthouse -- the U.S. senators held a briefing in a hotel just a few hundred yards away and expressed worries about the unfolding drama.

Connecticut Democrat Blumenthal warned of the potential destabilizing effect the case could have on a country facing the "grave harm and peril that Vladimir Putin poses."

"It is perhaps first and foremost with tanks, artillery and troops that may rumble down the highways of Ukraine," Blumenthal said. "But equally so, [it's] in the hybrid, twilight struggle of divide and conquer."

Information for this article was contributed by Vladimir Isachenkov, Yuras Karmanau, Frank Jordans and Aritz Parra of The Associated Press; and by Salvador Rizzo, Isabelle Khurshudyan and David L. Stern of The Washington Post. 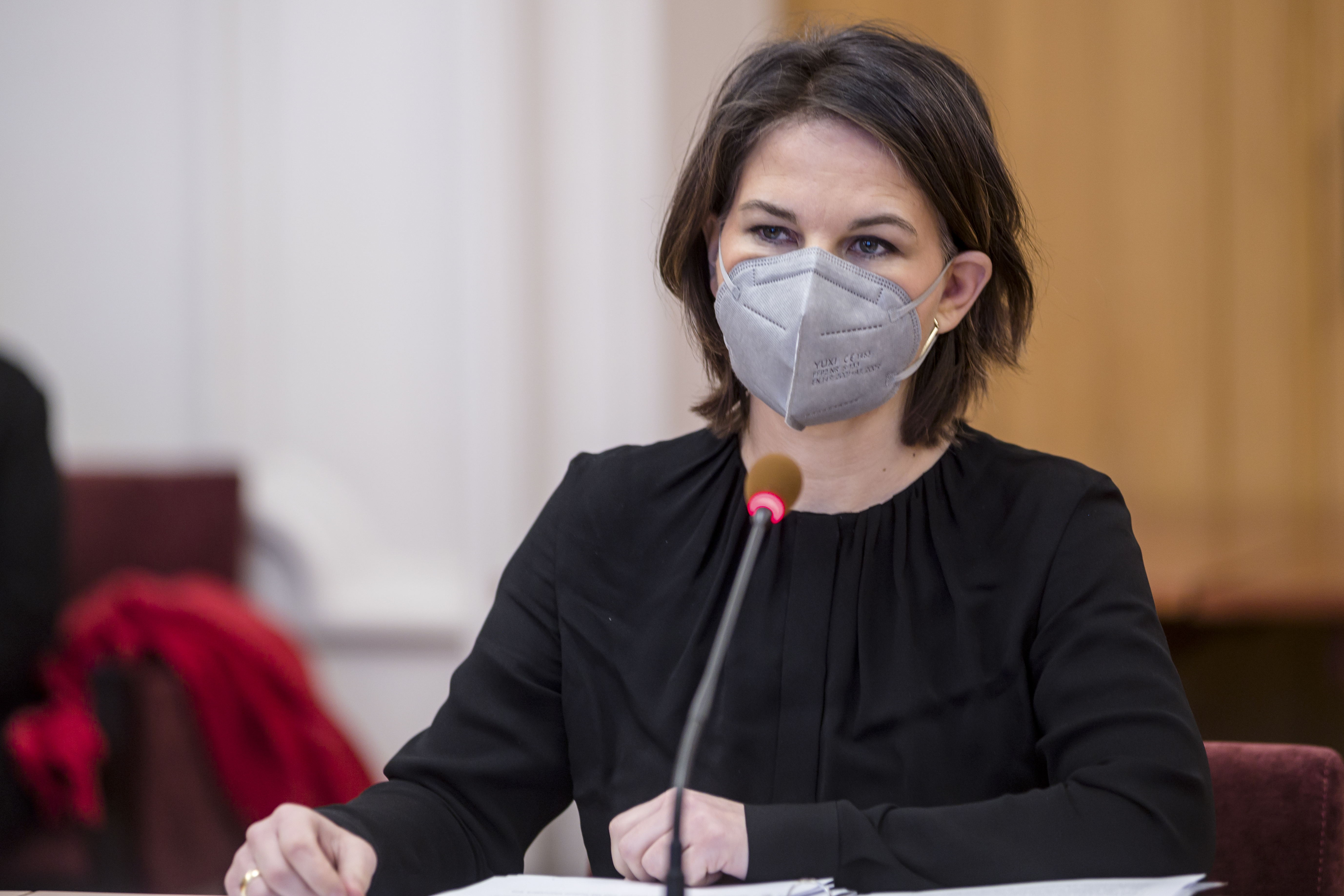 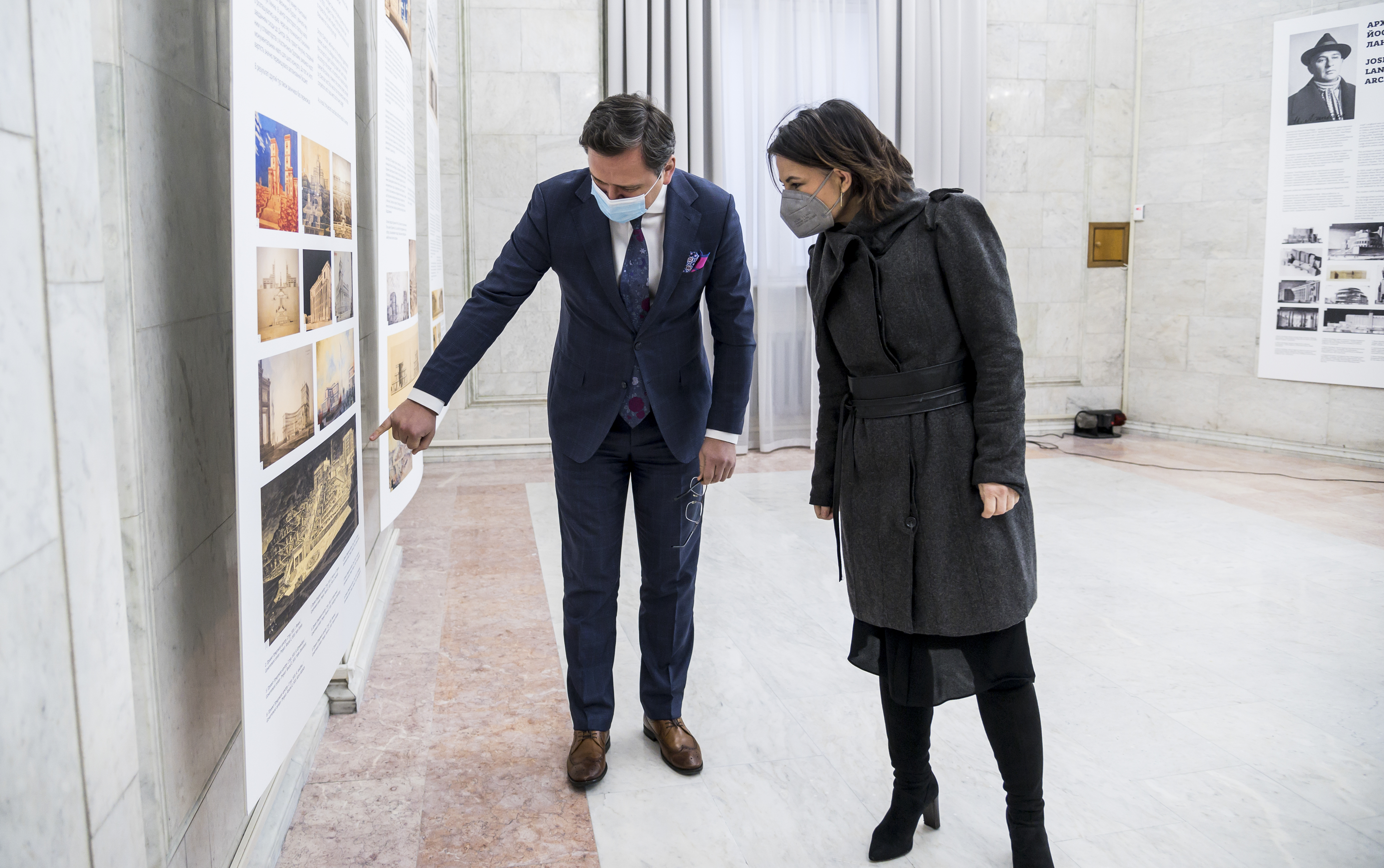 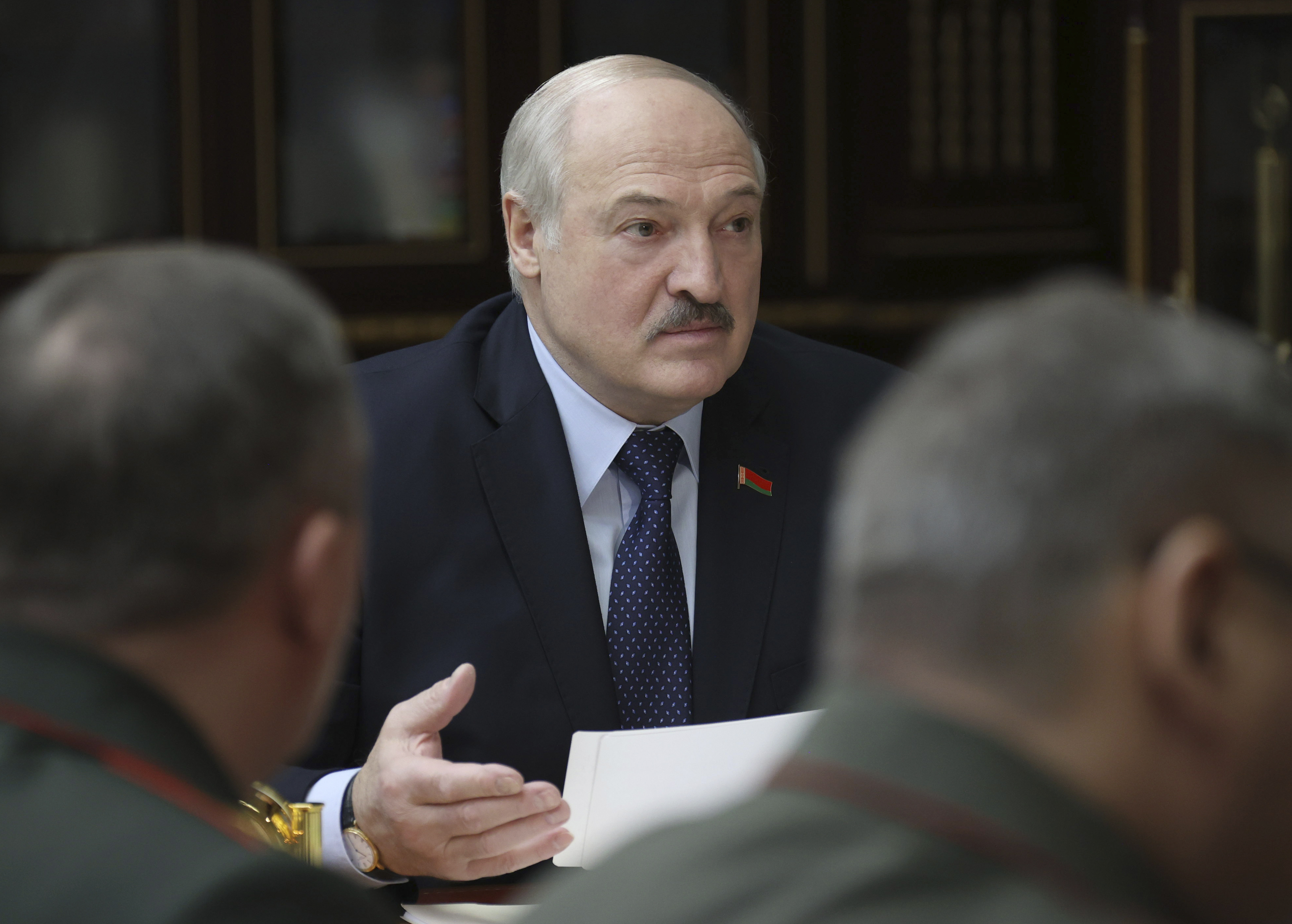 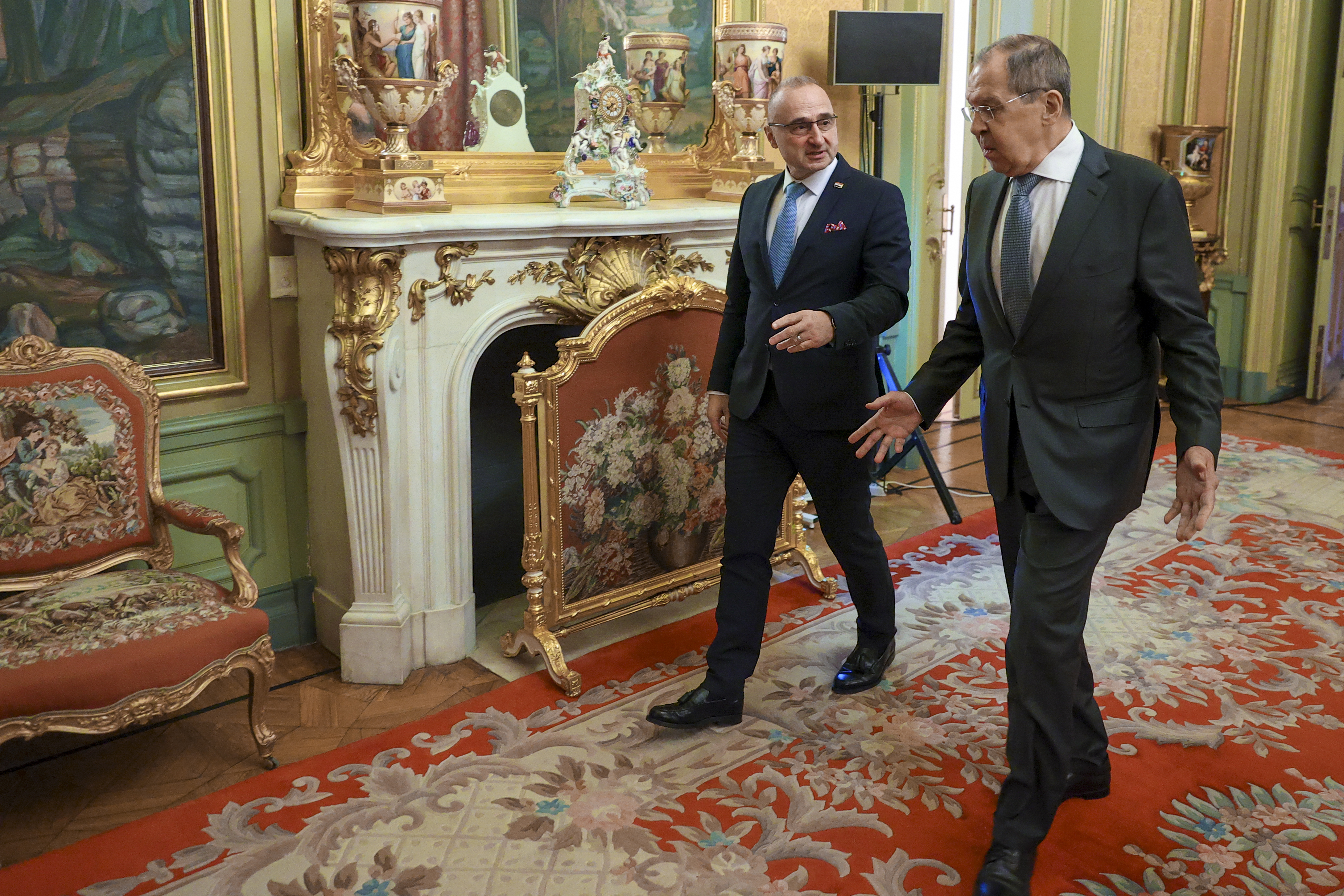 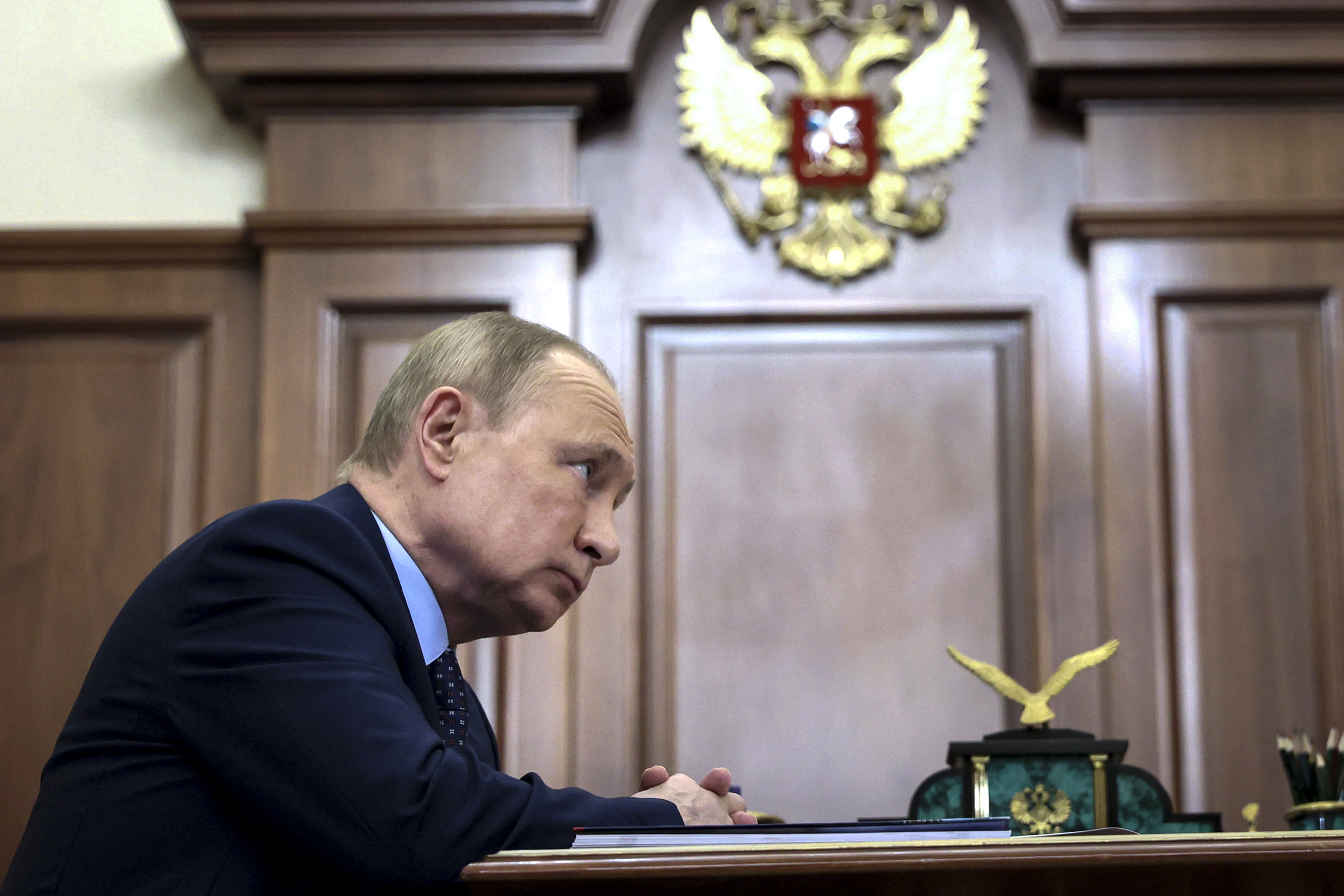 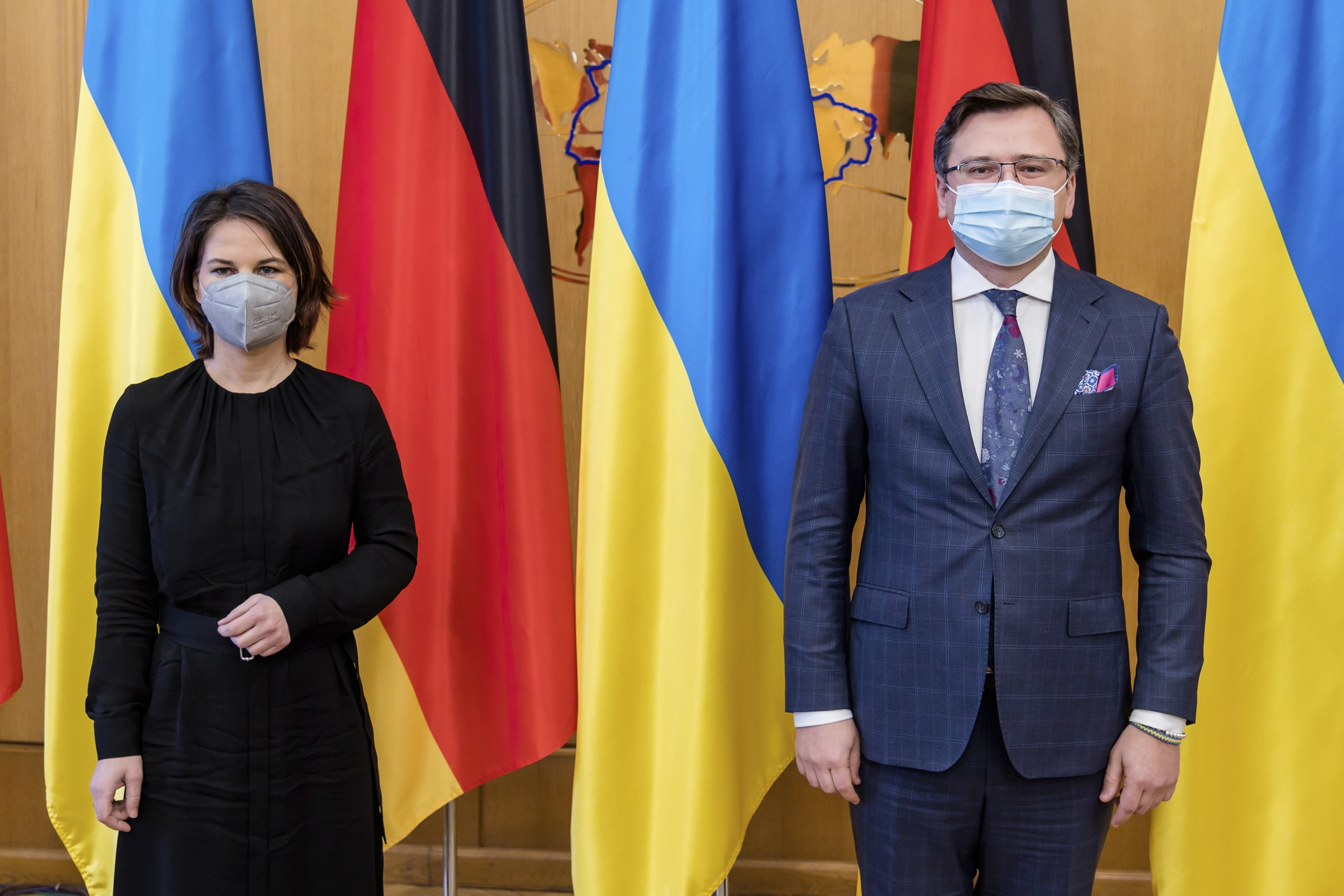 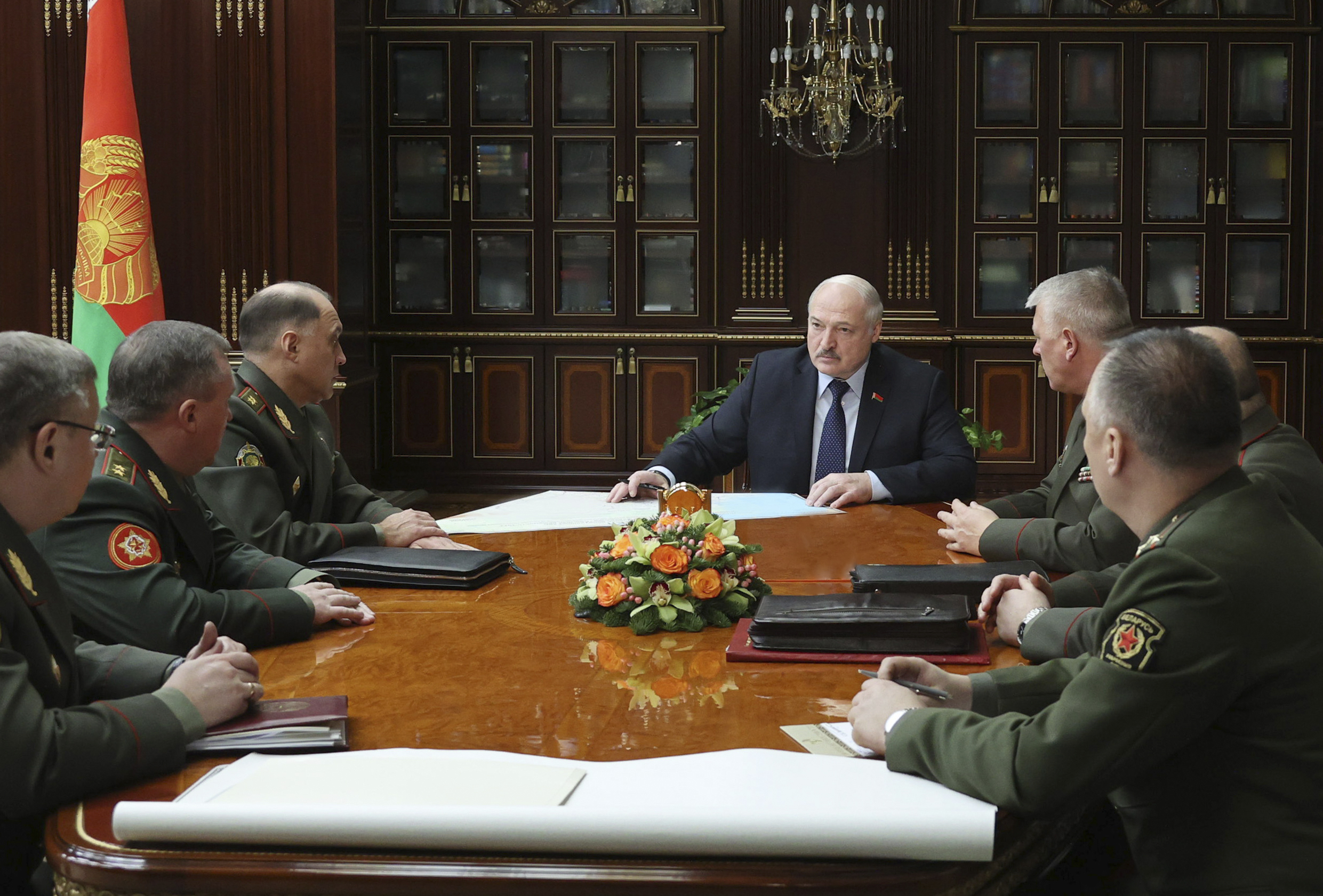 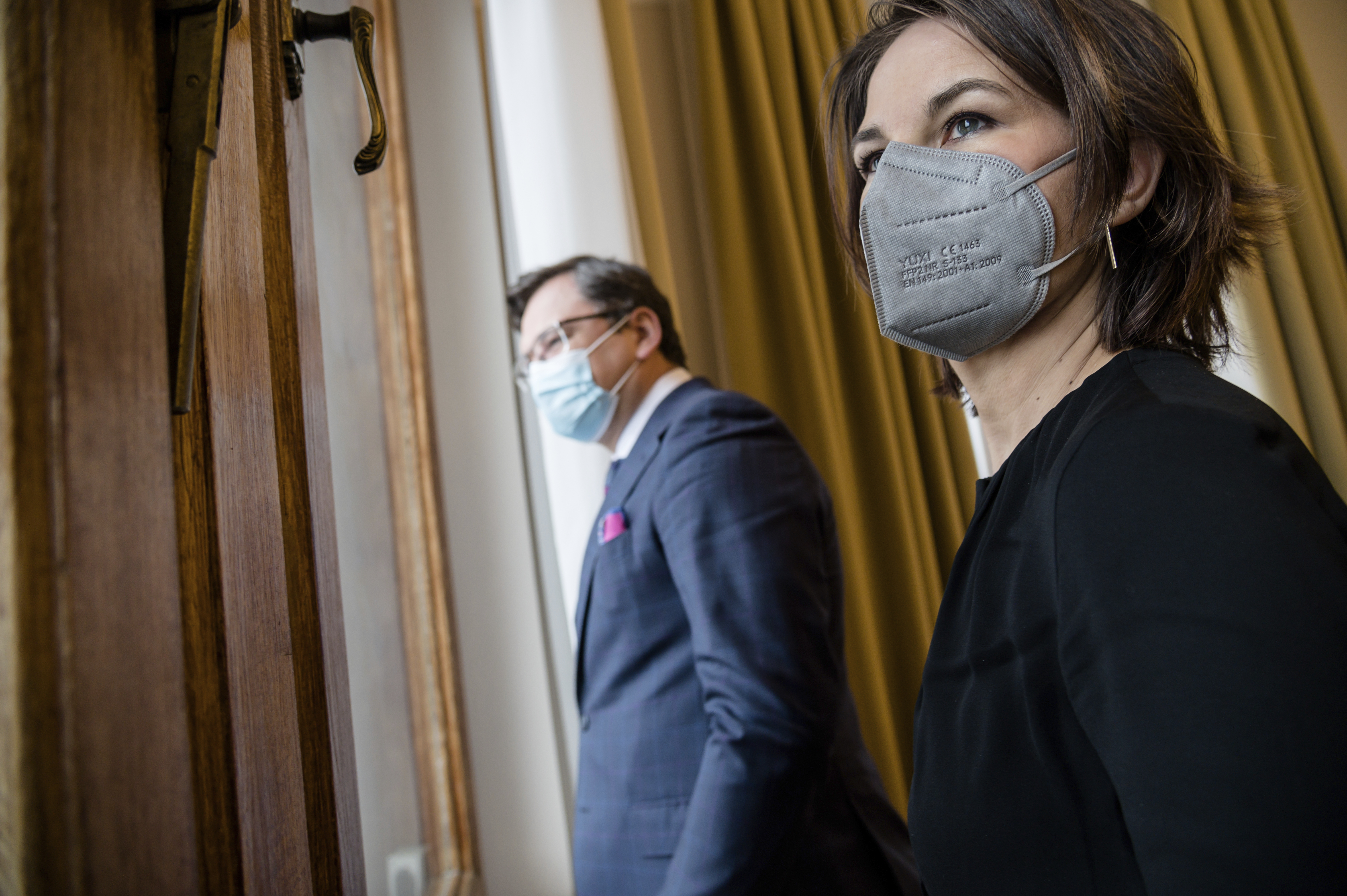 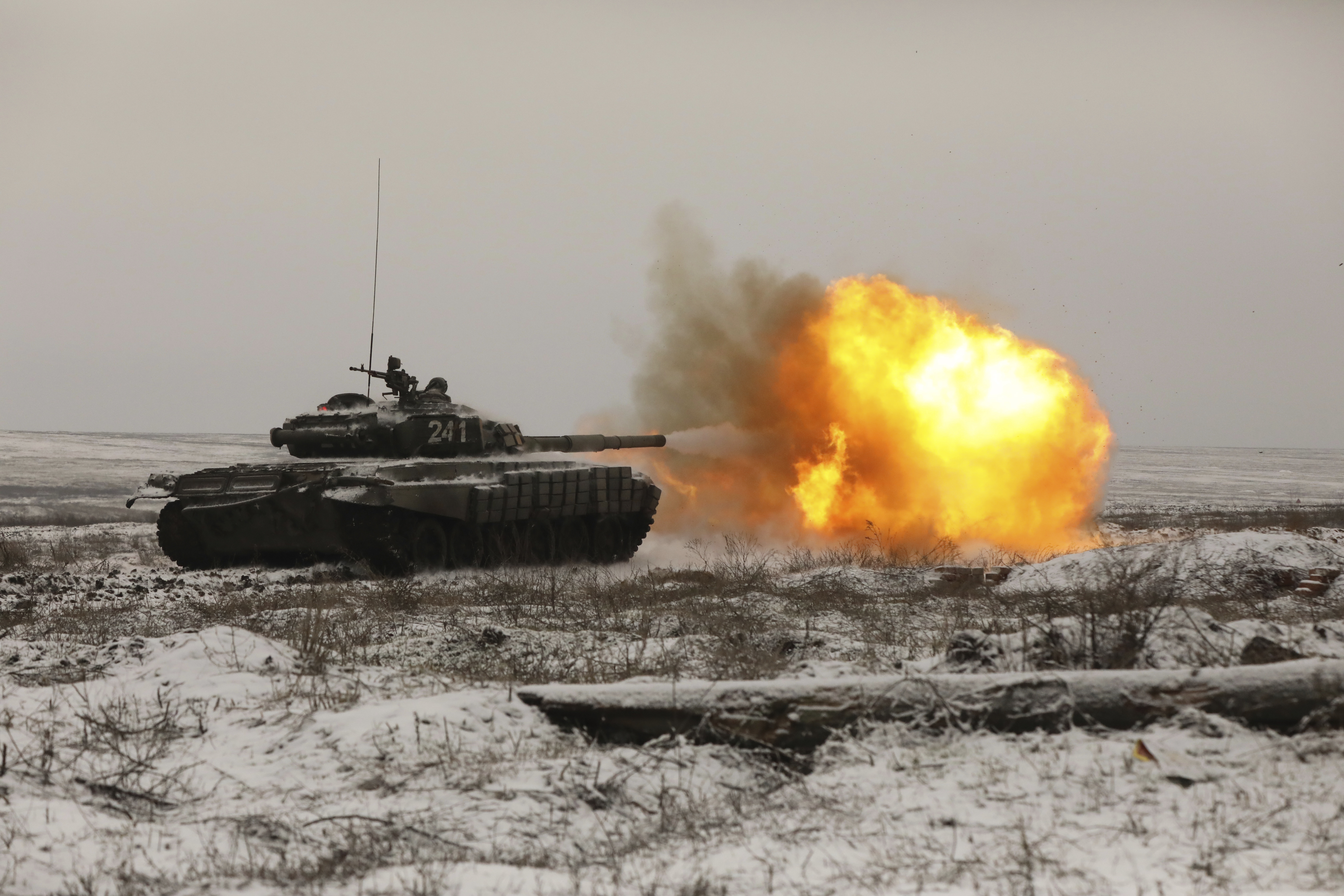 A Russian tank T-72B3 fires as troops take part in drills at the Kadamovskiy firing range in the Rostov region in southern Russia, on Jan. 12, 2022. The failure of last week's high-stakes diplomatic meetings to resolve escalating tensions over Ukraine has put Russia, the United States and its European allies in uncharted post-Cold War territory.(AP Photo)