Barty has easy time in opener 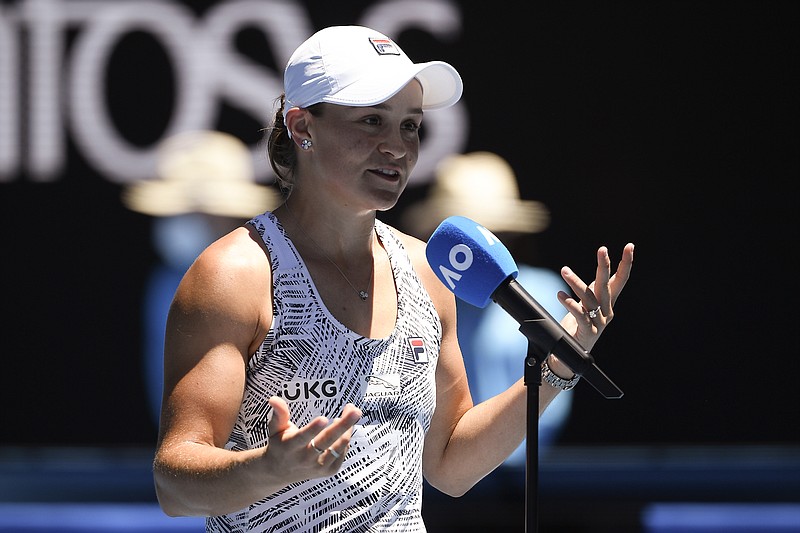 Ash Barty of Australia reacts as she is interviewed after defeating Lucia Bronzetti of Italy in their second round match at the Australian Open tennis championships in Melbourne, Australia, Wednesday, Jan. 19, 2022. (AP Photo/Andy Brownbill)

Albeit not for very long. The top-ranked Barty has Indigenous heritage and her second-round match at Melbourne Park's main stadium early today was among the features of a program dedicated to the Aboriginal and Torres Strait Islander people of Australia.

She was on and off the court quickly, beating 142nd-ranked qualifier Lucia Bronzetti 6-1, 6-1 in 52 minutes.

"Really cool. ... Nice for me to be a part of it in a way I feel most comfortable," Barty said. "On a day when we're bringing culture together ... it was really nice for me to go out and enjoy that.

"I was really fortunate to be able to play today."

Barty extended her streak of service holds to 48 games and moved into the third round at Melbourne Park for the sixth consecutive year.

The 2021 Wimbledon and 2019 French Open champion dropped just one game in her first-round match, which also took less than an hour, as she bids to become the first Australian woman since 1978 to win the country's Grand Slam tournament.

Next up for Barty will be a match against another Italian, 30th-seeded Camila Giorgi. Win that, and Barty could end up in a fourth-round showdown against defending champion Naomi Osaka.

In the day's opening match on Rod Laver Arena, eighth-seeded Paula Badosa had a 6-0, 6-3 victory over Italian qualifier Martina Trevisan.

Badosa won the title at a Sydney tuneup tournament last week, when she put together back-to-back match wins in Australia for the first time.

In other early second-round results on Day 3, two-time Australian Open champion Victoria Azarenka beat Jil Teichmann 6-1, 6-2 and and will next face No. 15-seeded Elina Svitolina, who was leading 6-3, 5-7, 5-1 when Harmony Tan retired from their second-round match.

Svitolina waited on court at Margaret Court Arena until Tan, who had received treatment on her lower left leg after the fifth game of the third set, was removed in a wheelchair.

"It's always horrible when any athlete gets injured in competition. She played really well and she made it not easy for me," Svitolina said. "I was a tough match. It's tough to see a player going out like this."

With her lower left leg heavily bandaged, the 24-year-old Tan couldn't even move to the ball as Svitolina held serve. The ailing Frenchwoman reverted to serving underarm, hoping to be able to finish the match rather than retire.

Chair umpire Richard Haigh called on Tan to stop or risk doing more damage as she appeared to struggle with cramps in her right leg, too.

With her mother signaling from the grandstand for her to quit, Tan left the court in tears after a hug from Svitolina and sustained applause from the crowd.

The former No. 1-ranked Murray, playing thanks to a wild-card invitation as he continues his career comeback from hip operations and thoughts of retirement, beat 21st-seeded Nikoloz Basilashvili 6-1, 3-6, 6-4, 6-7 (5), 6-4 to reach the second round at Melbourne Park.

He lost a five-setter in the first round in 2019 -- a match he, and everyone else, thought might have been his last in Australia -- after missing 2018 with an injury. He missed the 2020 tournament with a pelvic injury and last year's event because of covid-19.

"It's been a tough three, four years. Put in a lot of work to get back here," Murray said in his post-match TV interview at John Cain Arena, which was formerly known as Hisense and is parochially referred to as the People's Court. "I've played on this court many times, the atmosphere is incredible. This is the one where I thought I'd played my last.

"Amazing to be back, winning a five-set battle like that. Couldn't ask for more."

Murray's wasn't the only dramatic five-setter to end play Tuesday.

Second-seeded Daniil Medvedev, one of the biggest potential beneficiaries of Novak Djokovic's deportation, had a much more routine first round.

Nine-time champion Djokovic was already back in Serbia -- two days after losing his legal challenge to stay in Australia despite being unvaccinated against covid-19 -- when Medvedev went into Rod Laver Arena for a 6-1, 6-4, 7-6 (3) win over Henri Laaksonen.

Aiming to be the first man in the Open era to win his second major title in the very next Grand Slam appearance after his first such trophy, Medvedev advanced along with No. 4 Stefanos Tsitsipas, No. 5 Andrey Rublev, No. 11 Jannik Sinner, No. 13 Diego Schwartzman and No. 15 Roberto Bautista Agut.

Leylah Fernandez wasn't so fortunate on the women's side.

The 19-year-old Canadian lost 6-2, 6-4 to 133rd-ranked wild-card entry Maddison Inglis in her first Grand Slam match since her runner-up finish at the U.S. Open.

Emma Raducanu fared better in her debut at the Australian Open. The 17th-seeded Briton defeated 2017 U.S. Open champion Sloane Stephens 6-0, 2-6, 6-1 in a seesawing night match that brought the Day 2 program to a close. 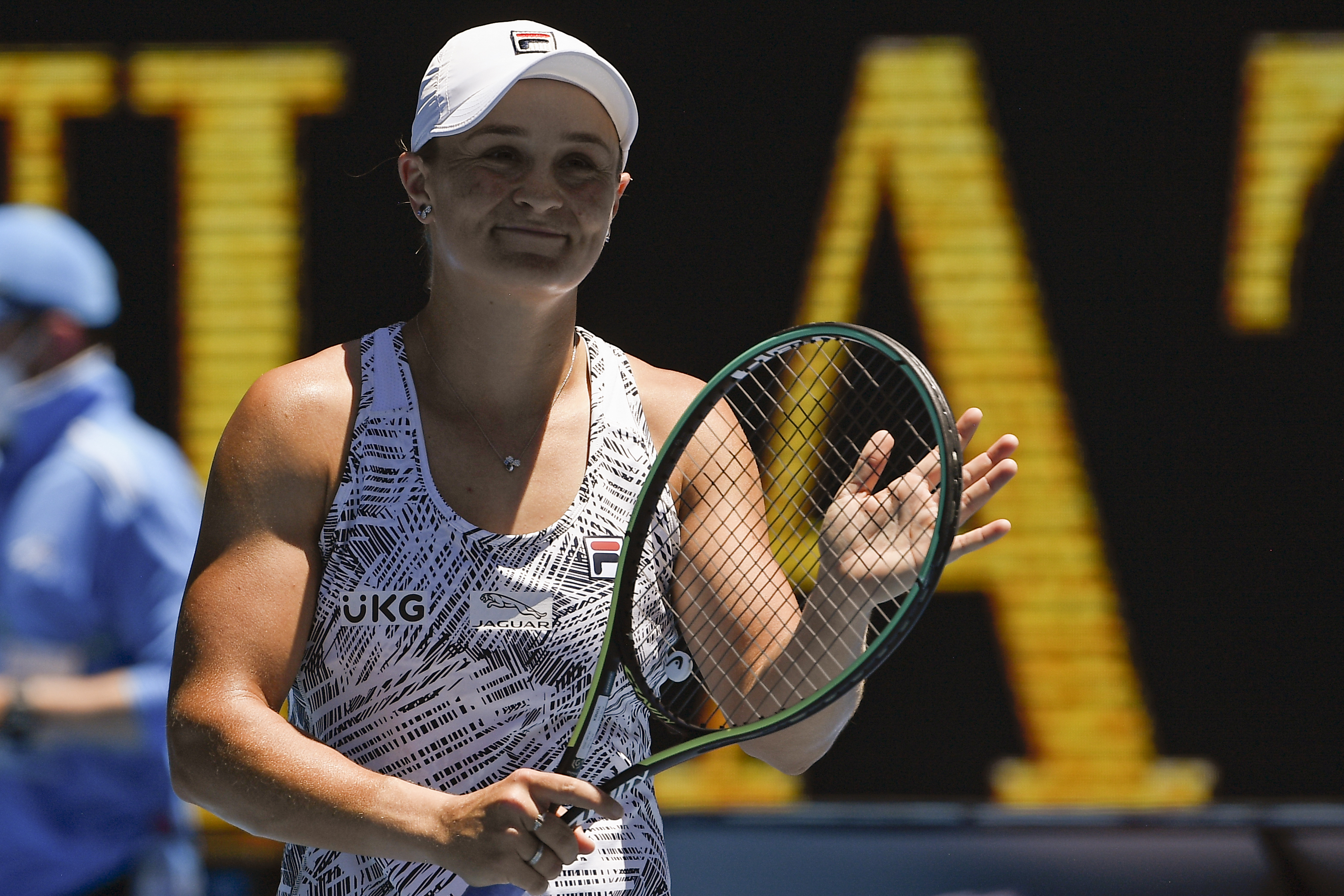 Ash Barty of Australia reacts after defeating Lucia Bronzetti of Italy in their second round match at the Australian Open tennis championships in Melbourne, Australia, Wednesday, Jan. 19, 2022. (AP Photo/Andy Brownbill) 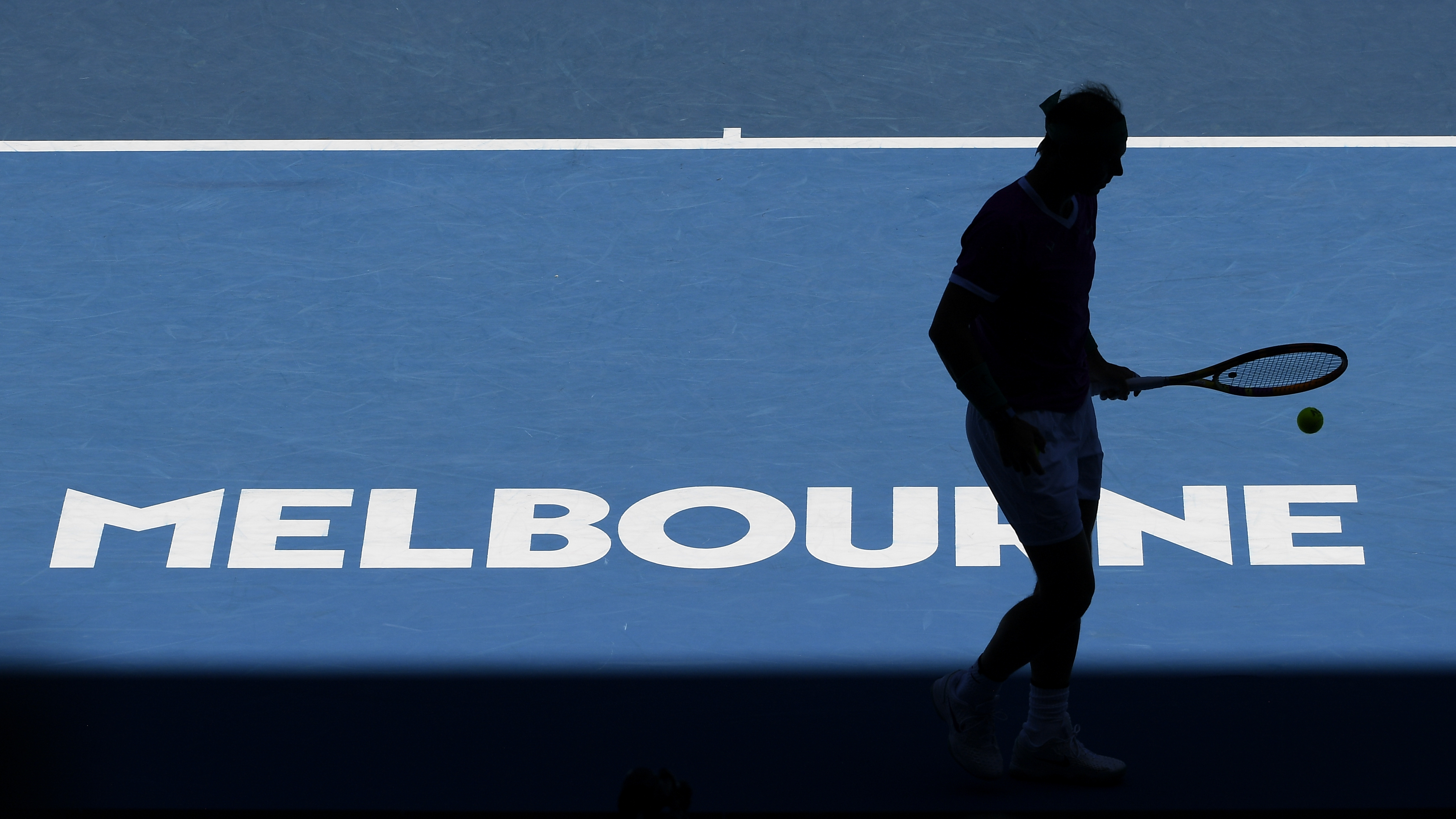 Rafael Nadal of Spain prepares to serve to Yannick Hanfmann of Germany during their second round match at the Australian Open tennis championships in Melbourne, Australia, Wednesday, Jan. 19, 2022. (AP Photo/Andy Brownbill) 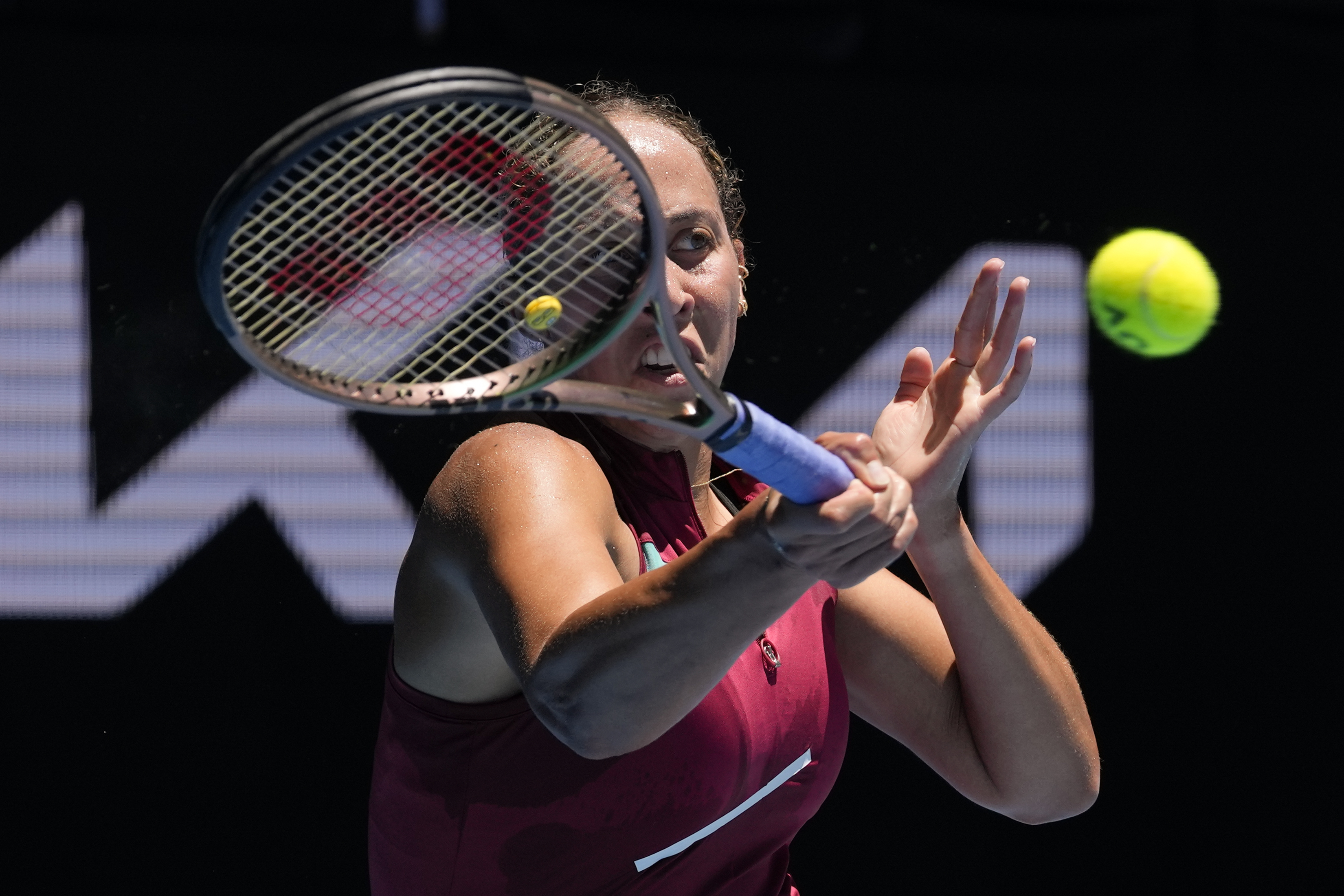 Madison Keys of the U.S. plays a forehand return to Jaqueline Cristian of Romania during their second round match at the Australian Open tennis championships in Melbourne, Australia, Wednesday, Jan. 19, 2022. (AP Photo/Simon Baker) 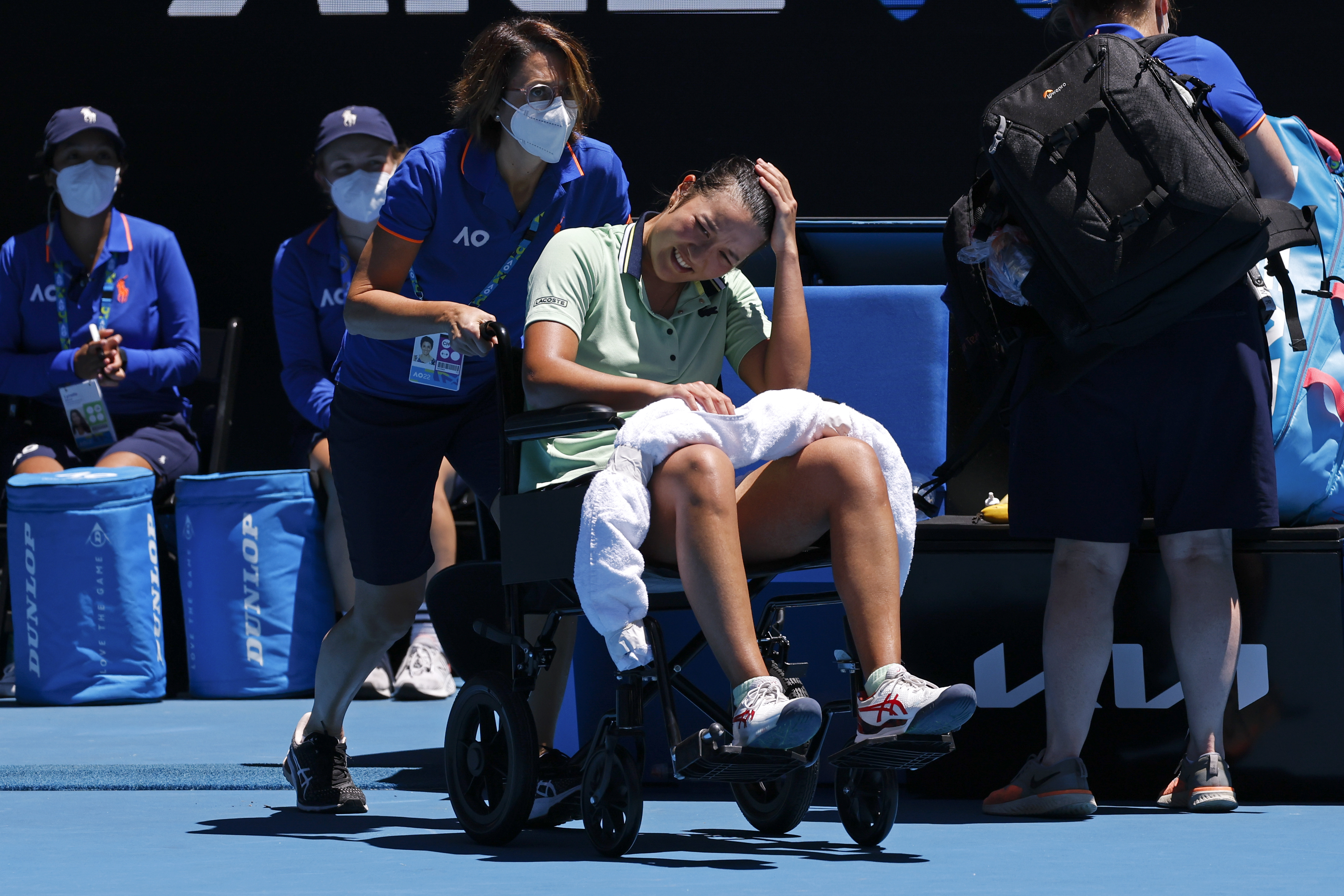 Harmony Tan of France is taken from the court in a wheelchair during her second round match against Elina Svitolina of Ukraine at the Australian Open tennis championships in Melbourne, Australia, Wednesday, Jan. 19, 2022. (AP Photo/Hamish Blair) 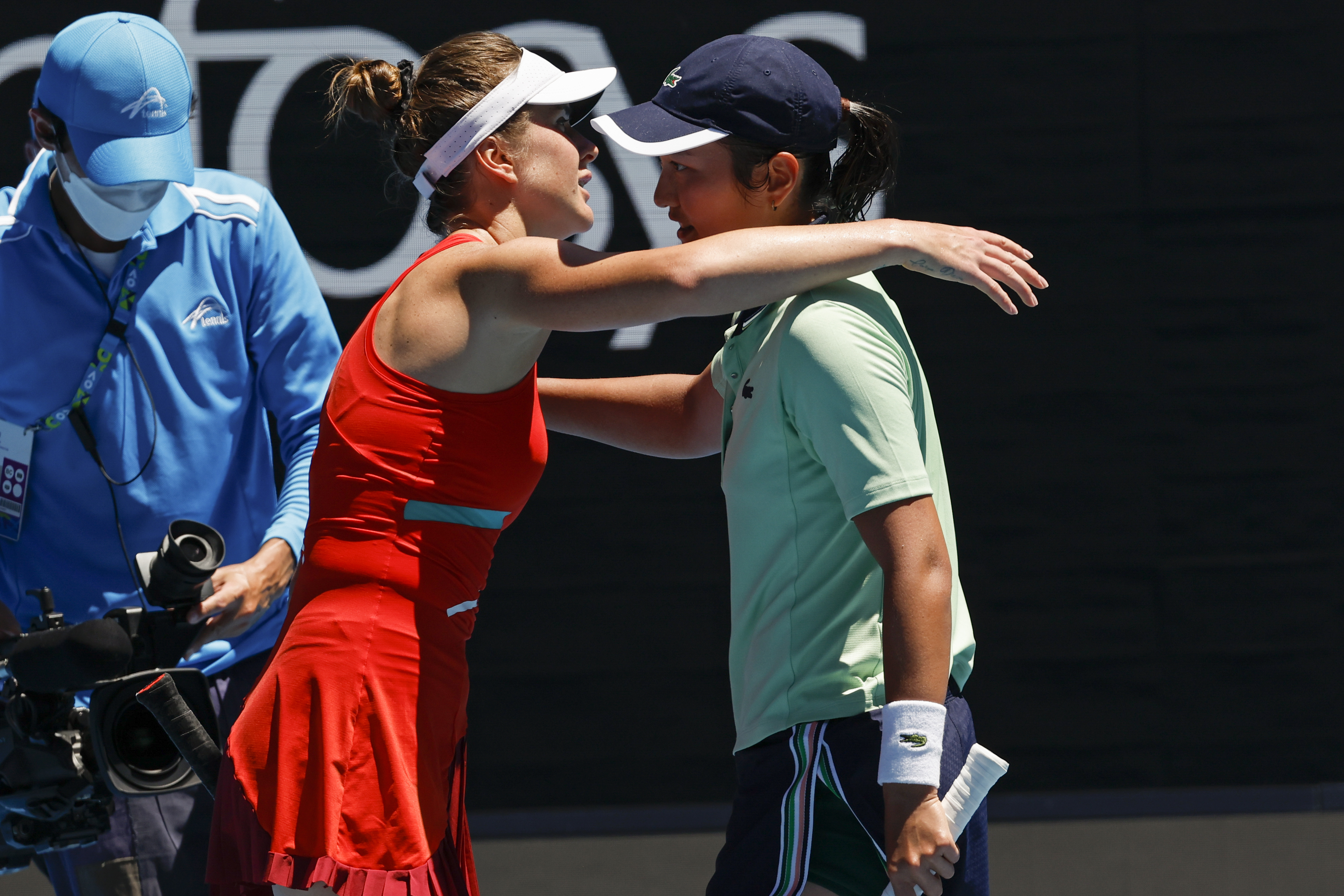 Harmony Tan, right, of France is consoled by Elina Svitolina of Ukraine after she withdrew from their second round match at the Australian Open tennis championships in Melbourne, Australia, Wednesday, Jan. 19, 2022. (AP Photo/Hamish Blair) 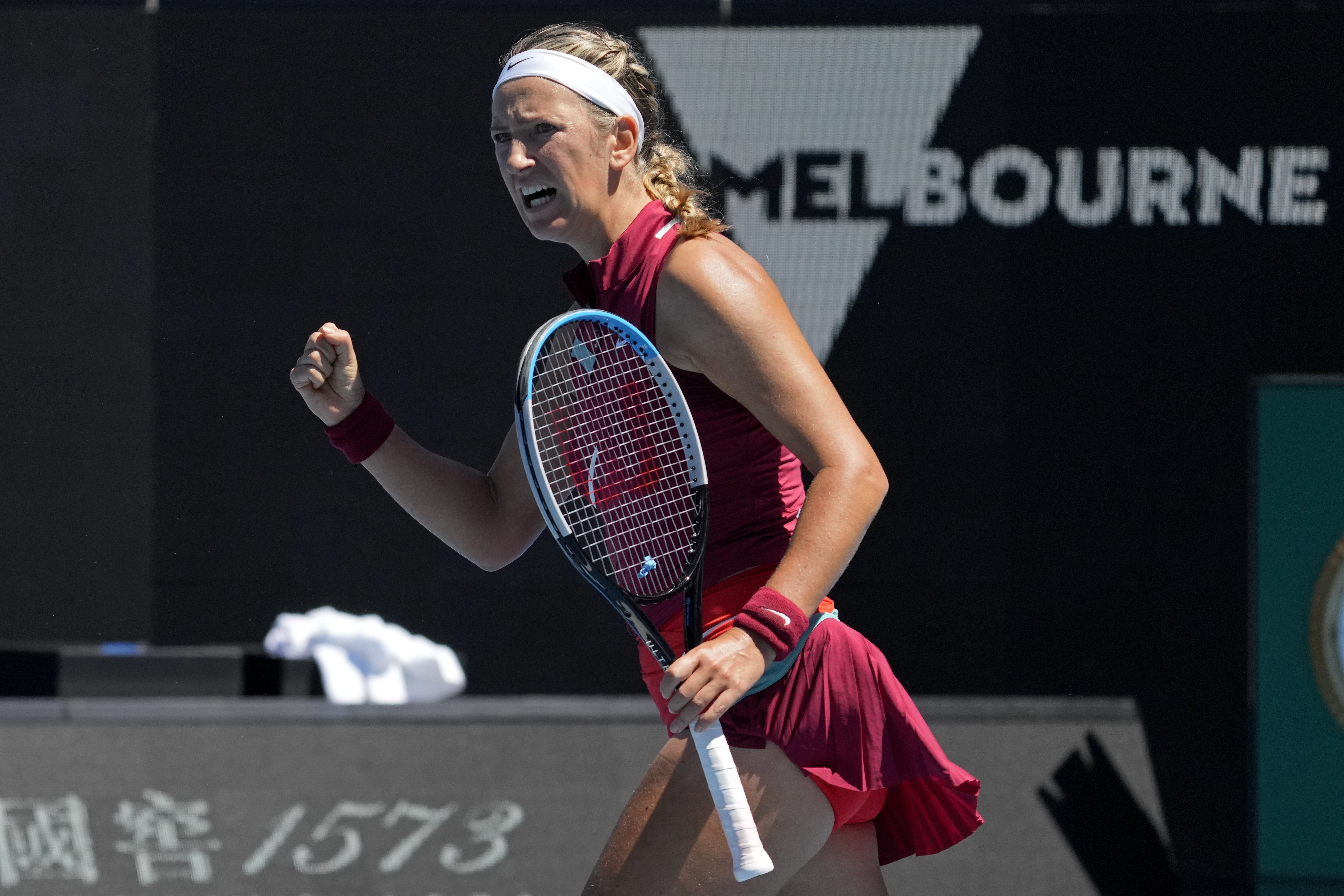 Victoria Azarenka of Belarus reacts during her second round match against Jil Teichmann of Switzerland at the Australian Open tennis championships in Melbourne, Australia, Wednesday, Jan. 19, 2022. (AP Photo/Simon Baker)