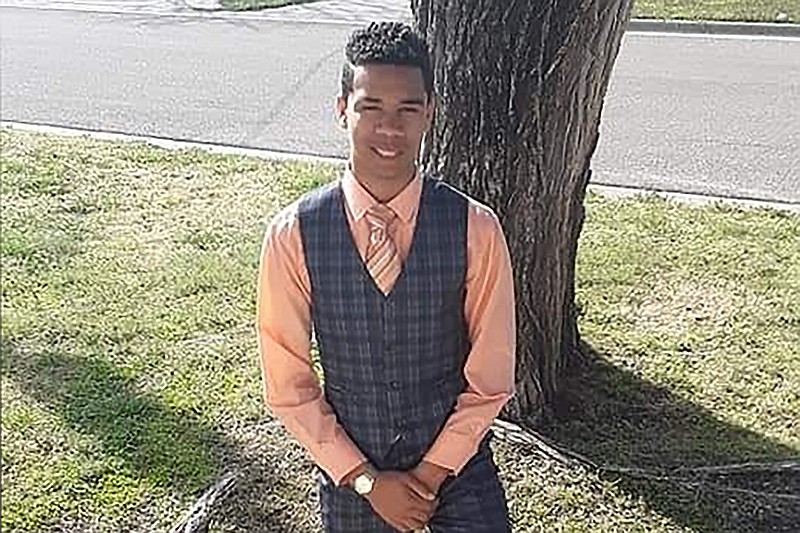 FILE - This April 21, 2019, photo provided by Sarah Harrison shows Cedric Lofton of Wichita, Kan. A Kansas prosecutor, Sedgwick County District Attorney Marc Bennett, says Tuesday, Jan. 18, 2022, he can't file charges over the death of Lofton, a Black 17-year-old who became unresponsive while being restrained after an altercation with staff at a Wichita juvenile center in September. (Courtesy Sarah Harrison via AP)

WICHITA, Kan. -- A Kansas prosecutor said Tuesday he won't file criminal charges over the death of a Black 17-year-old who became unresponsive while being restrained facedown for more than 30 minutes after an altercation with staff at a Wichita juvenile center in September.

Sedgwick County District Attorney Marc Bennett said the state's stand-your-ground law prevents him from bringing any charges in the death of Cedric Lofton because staff members were protecting themselves. He said that if he did bring charges, "a judge would be duty-bound to dismiss the case."

The teen's family decried the decision, issuing a statement in which they called it "yet another instance of an unarmed Black teenager killed by law enforcement with impunity, threat of reprisal or even an ounce of accountability."

[Video not showing up above? Click here to watch » arkansasonline.com/119lofton/]

Community activists have called for a special prosecutor, the release of video and the names of the individuals involved in Lofton's death. His brother Marquan Teetz and a local pastor on Tuesday asked a court to release video of the struggle, citing the state's open records law. The Wichita Police Department on Tuesday released its body camera video.

Lofton was living with foster parents when Wichita police responding to a report of a disturbance encountered him outside a home Sept. 24, according to a report from Bennett based on a review of video and other evidence. His foster family said Lofton had been behaving erratically in recent months, had grown paranoid and was hallucinating, according to the report. Bennett said Lofton was in the midst of a mental health crisis and that police initially tried to get him to seek treatment.

The 5-foot-10, 135-pound Lofton resisted police, assaulting at least one officer before they could restrain him, Bennett's report said. Police took him to the Sedgwick County Juvenile Intake and Assessment Center, where officers put him in a holding cell at 2:45 a.m. The Wichita officers left the center at 4:15 a.m., leaving Lofton unrestrained with an intake specialist who opened the door to his holding cell.

Bennett said the intake specialist later told investigators that he informed Lofton he would be released to his guardian. The teen walked out of the cell. A security officer arrived and tried to help get Lofton back into the holding cell after he tried to grab a computer monitor from the intake counter. Lofton hit the intake specialist, knocking his glasses to the ground, according to Bennett's report.

A December autopsy report ruled the death a homicide and contradicted a preliminary finding that the teenager had not suffered apparent life-threatening injuries. The autopsy said Lofton's heart and breathing stopped after he was handcuffed while lying on his stomach.

Bennett said there are legitimate policy questions, including about whether Lofton should have instead been taken to a mental health facility and whether the use of a restraint system was appropriate, but that none of the questions justify criminal charges.

He said he struggled with whether a charge of involuntary manslaughter was justified, but concluded that it was not.

"The bottom line is: The video, the interviews of the employees, even the coroner's findings that the death was caused by the effect of a prolonged struggle support the workers' explanation that they only held him down because he continued to struggle that entire time," Bennett said.

"If they have the ability to defend themselves initially, because he resisted, then the fact that he continued to resist for some 30 minutes meant that they could, under Kansas law, continue to lawfully apply the restraint."