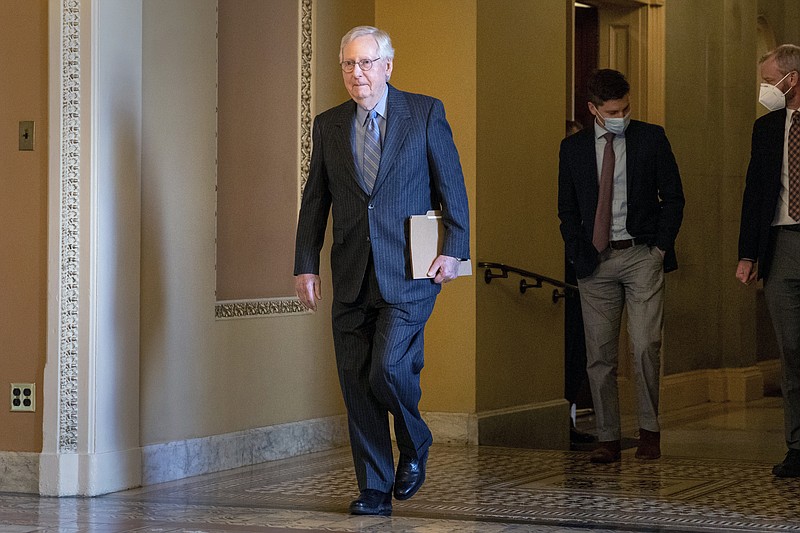 WASHINGTON -- Voting legislation that Democrats and civil- rights leaders say is vital for protecting democracy appeared headed for defeat as the Senate churned into debate Tuesday, a setback enabled by President Joe Biden's own party as two holdout senators refused to support rule changes to overcome a Republican filibuster.

The Democratic senators, Kyrsten Sinema of Arizona and Joe Manchin of West Virginia, faced criticism from Black leaders and civil -rights organizations for failing to take on what critics call the "Jim Crow filibuster."

The debate carries echoes of an earlier era when the Senate filibuster was deployed in lengthy speeches by opponents of civil-rights legislation. It comes as Democrats and other voting advocates nationwide warn that Republican-led states are passing laws making it more difficult for Black Americans and others to vote by consolidating polling locations, requiring certain types of identification and ordering other changes.

[Video not showing up above? Click here to watch » arkansasonline.com/119schumer/]

Senate Majority Leader Charles Schumer, D-N.Y., acknowledged the bill's likely defeat this week. But he said the fight is not over as he heeds advocates' call to force all senators to go on record with their positions.

"We ain't giving up," Schumer said after an evening strategy meeting. "It is a fight for the soul and the future of America."

This is the fifth time the Senate will try to pass voting legislation in this congressional session.

The Freedom to Vote: John R. Lewis Act combines previous bills into a single package that would make Election Day a national holiday, ensure access to early voting and mail-in ballots -- which have become especially popular during the covid-19 pandemic -- and enable the Justice Department to intervene in states that have a history of voter interference, among other changes.

Manchin and Sinema say they support the package, which has passed in the House, but they are unwilling to change the Senate rules to muscle it through over Republican objections. With a 50-50 split, Democrats have a narrow Senate majority -- Vice President Kamala Harris can break a tie -- but they lack the 60 votes needed to overcome a GOP filibuster.

Instead, Schumer said the Senate will vote on a more specific rules change for a "talking filibuster" on this one bill -- requiring senators to stand at their desks and argue their views, rather than the current practice that allows senators to simply signal their objections.

Initial voting could start as soon as today. But even the proposal for a talking filibuster is expected to fail, as Manchin and Sinema have said they are unwilling to change the rules on a party-line vote by Democrats alone.

Senate Republican leader Mitch McConnell of Kentucky, who led his party in doing away with the filibuster's 60-vote threshold for U.S. Supreme Court nominees during Donald Trump's presidency, warned of changing the rules again. He said Tuesday that it would "break the Senate."

Democratic senators countered in floor speeches that with Republicans objecting to the voting legislation they have no choice.

Manchin did open the door to a more tailored package of voting law changes -- including the Electoral College Act, which became a focus of the Jan. 6, 2021, insurrection at the Capitol -- that he said a bipartisan group of senators are working on and could draw Republican support.

"There are so many things that we can agree on," he said, though he held firm against voting to change the filibuster rules.

Just as Manchin and Sinema blocked Biden's broad Build Back Better domestic spending package, the two are now dashing hopes for another major part of the president's agenda. They are infuriating many of their colleagues and faced a barrage of criticism during Martin Luther King Jr. Day events.

Martin Luther King III, son of the late civil rights leader, compared Sinema and Manchin to the white moderates his father wrote about during the civil-rights battles of the 1950s and '60s -- who declared support for the goals of Black voting rights but not the direct actions or demonstrations that ultimately led to passage of landmark legislation.

"History will not remember them kindly," the younger King said, referring to Sinema and Manchin by name.

Once reluctant himself to change Senate rules, Biden used the King holiday to press senators to do just that. But the push from the White House, including Biden's speech last week in Atlanta comparing opponents to segregationists, is seen as too late, coming as the president ends his first year in office with his popularity sagging.

"The president's view is that the American people deserve to see where their leaders stand on protecting their fundamental rights," said White House press secretary Jen Psaki.

The Senate launched the dayslong debate, but the outcome is expected to be no different from past failed votes on the legislation. Biden has been unable to persuade Sinema and Manchin to join other Democrats to change the rules to lower the 60-vote threshold. In fact, Sinema upstaged the president last week, reiterating her opposition to the rules changes just before Biden arrived on Capitol Hill to court senators' votes.

Both senators have argued that preserving the filibuster rules is important for fostering bipartisanship. They also warn of what would happen if Republicans win back majority control.

McConnell has argued that the broad package now before the Senate is a federal overreach into state-run elections, and he criticized Biden's speech last week as "unpresidential."

Leading sports figures from Manchin's home state of West Virginia also have weighed in. In a letter last week, University of Alabama football coach Nick Saban, NBA Hall of Famer Jerry West and others urged him to support the legislation.

The political group Emily's List said it won't endorse Sinema if she cannot support a path forward for the voting bill.

Before Republicans lowered the vote threshold for Trump's Supreme Court nominees, Democrats had similarly dropped it to a simple majority for confirmation of administrative positions and lower court nominees. It typically takes a 67-vote supermajority to change party rules, but both were done on party-line votes.

The voting bill was the Democrats' top priority this Congress, and the House swiftly approved H.R. 1 only to see it languish in the Senate. 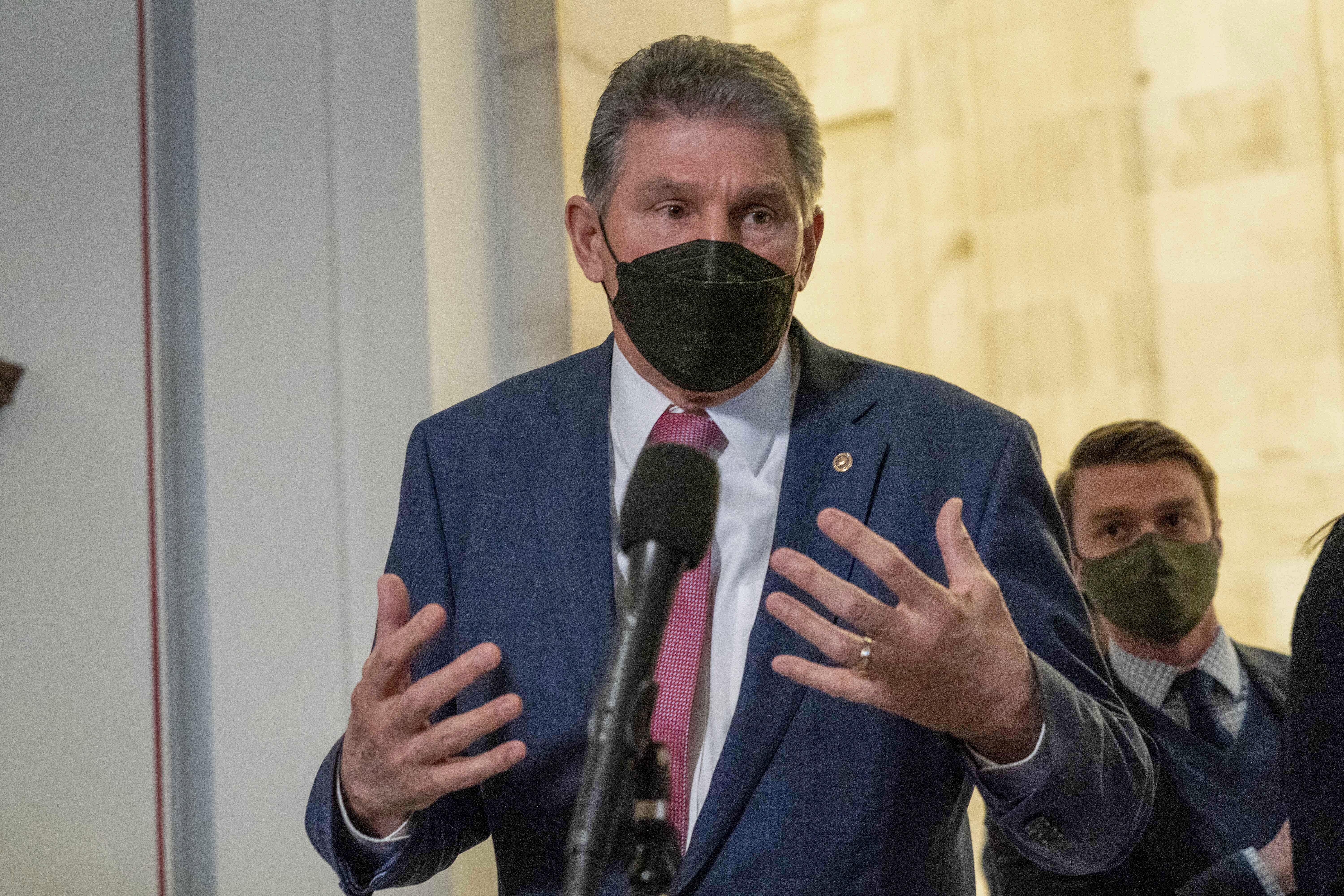 Sen. Joe Manchin, D-WVa., speaks to the media after senate democrats luncheon, on Capitol Hill in Washington, Thursday, Jan. 13, 2022. Biden is meeting privately with Senate Democrats at the Capitol, a visit intended to deliver a jolt to the party's long-stalled voting and elections legislation. ( AP Photo/Jose Luis Magana) 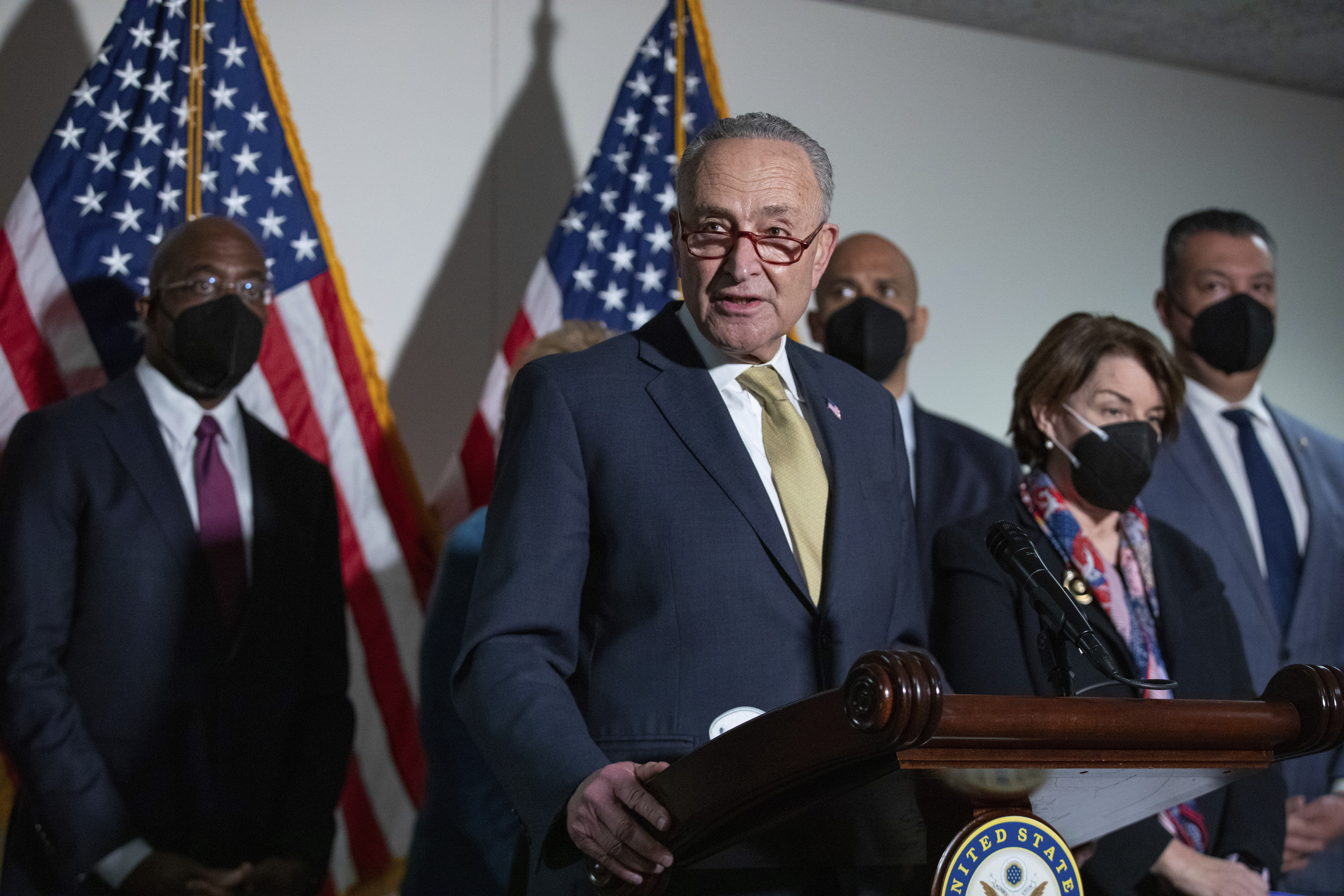 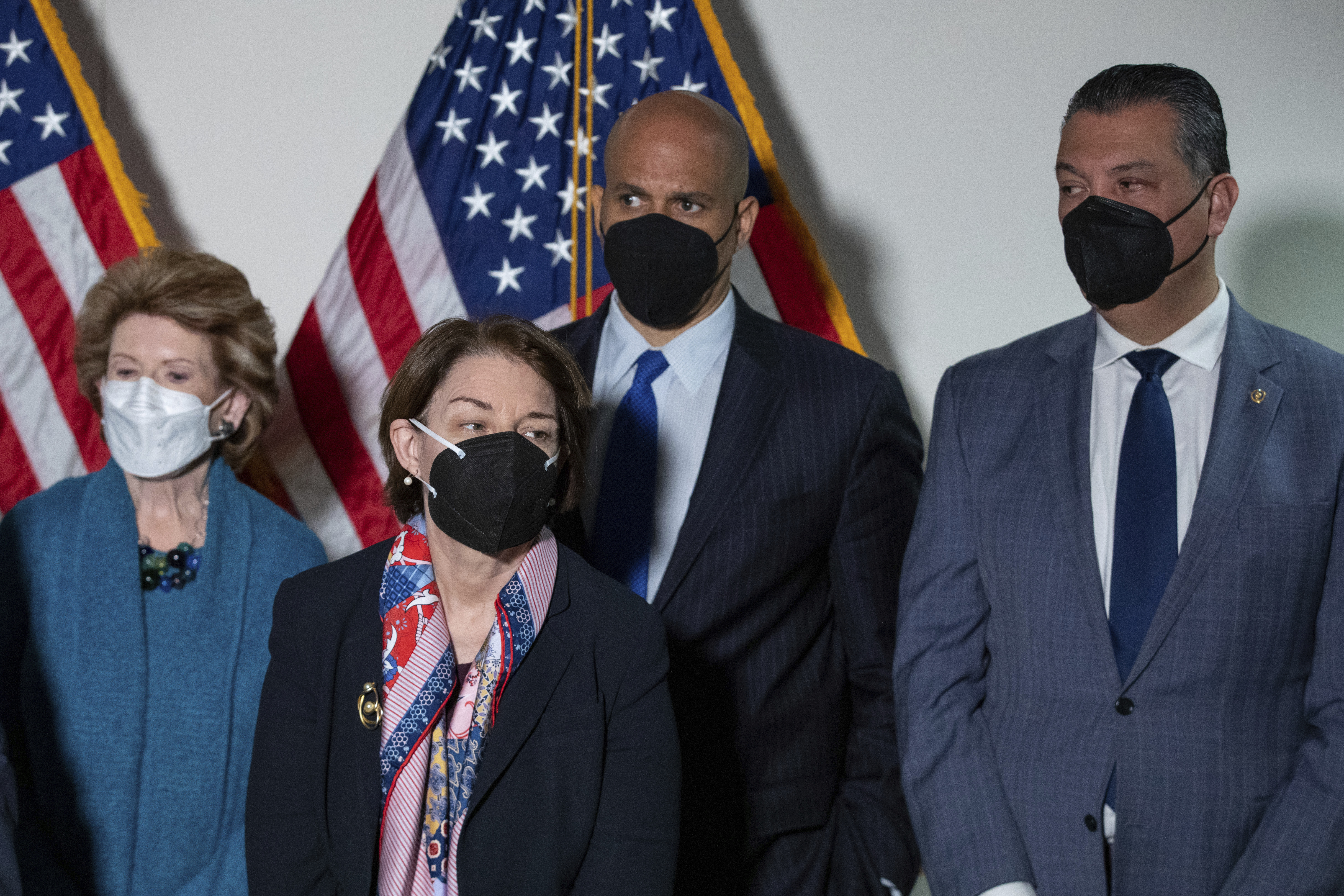