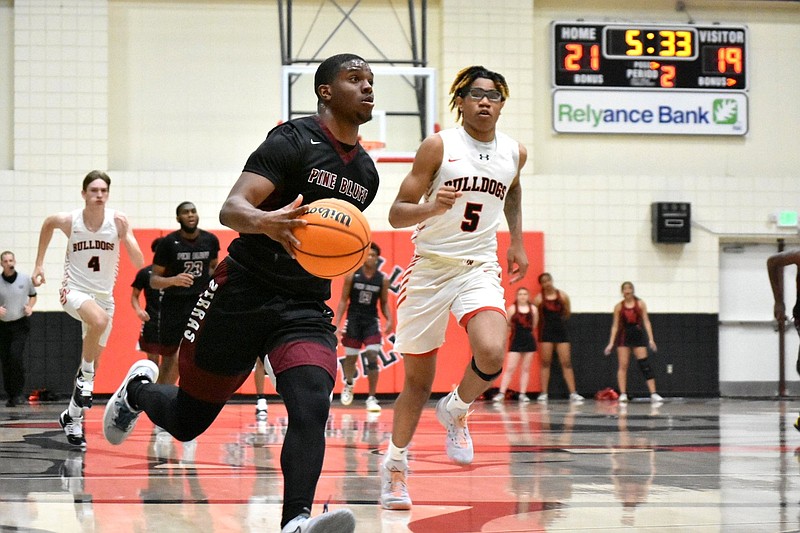 Well-rested from game action for 13 days, White Hall High School attacked visiting Pine Bluff from outside the 3-point line and built a 14-3 lead less than 4 minutes into Thursday's rivalry game.

"I knew we would come out sluggish and slow, and I knew they would be ready to play," Pine Bluff Coach Billy Dixon said. "You look at the history of us coming over here, it's a dogfight in the first half, always. Now, it's a dogfight the whole game."

Nearly 24 hours after beating Hot Springs, Dixon's Zebras woke out of the early lull and turned the tide on the young Bulldogs to escape Bert Honey Gymnasium with a 57-50 win.

"I told them the game is a game of runs," Dixon said. "We just had to stay poised and do the stuff we do, and eventually we'll get their attention and come out and start playing basketball."

Courtney Crutchfield scored 26 points, Troy'reon Ramos had 10 points, and the Zebras (8-6, 3-0 in 5A-South) won the second of three games in as many days. The Hot Springs and White Hall games were makeups of postponements due to Pine Bluff's campus being closed amid a covid-19 surge.

The Zebras will try to complete the trifecta against Sheridan tonight at McFadden Gymnasium. That game will tip off following the varsity girls, who start at 6.

Crutchfield finished the first half with 20 points and led a 10-0 run that moved Pine Bluff into the lead after trailing 18-15 through one quarter. Despite a balanced onslaught from White Hall's Jai'Chaunn Hayes, Keaton Stone and Randy Emerson, the Zebras held onto a 31-29 lead at halftime and led 39-37 at the end of the third quarter.

It turned out -- as Ramos pointed out, that getting the ball to Crutchfield, the standout sophomore guard, was the Zebras' solution.

"That was the message for them on the court, to get him the ball because he is our leading scorer and he makes it happen," Dixon said.

"We've just got to play together and play as a team, and run," Ramos said. "It's just like getting conditioning in. We've still got to get better every day."

Stone, the Sheridan transfer, scored 15 points and Emerson had 10.

Nadiya Moten continued her solid shooting off the bench with 15 points, T'Ceana Jeffrey scored 14, and the Fillies (3-6, 2-1 in 5A-South) won their second straight game in as many days with the help of a 20-10 third-quarter advantage.

Moten made two 3-pointers and shot 7 of 8 from the free-throw line. She had five 3s against Hot Springs on Wednesday.

The back-to-back victories point toward a turnaround in the Fillies' program after winning just one game last season.

"Play together and play to everybody's strengths, and play to your own strengths," said Sa'vhanna Obasade, who scored 9 points against White Hall. "Let everybody do what they do so we can win the game."

Pine Bluff trailed 21-19 at halftime but went on the attack with long-range shooting in the third quarter. The Fillies made five 3-point baskets from the arc.

"You just tell them to keep fighting," Fillies Coach Trena Ford-Rusley said. "That's what we've said since I took over in August. We knew the foundation of what we had, and we said we're going to pull it all together. We're going to learn what each person does best, and we're going to let them do that in the game." 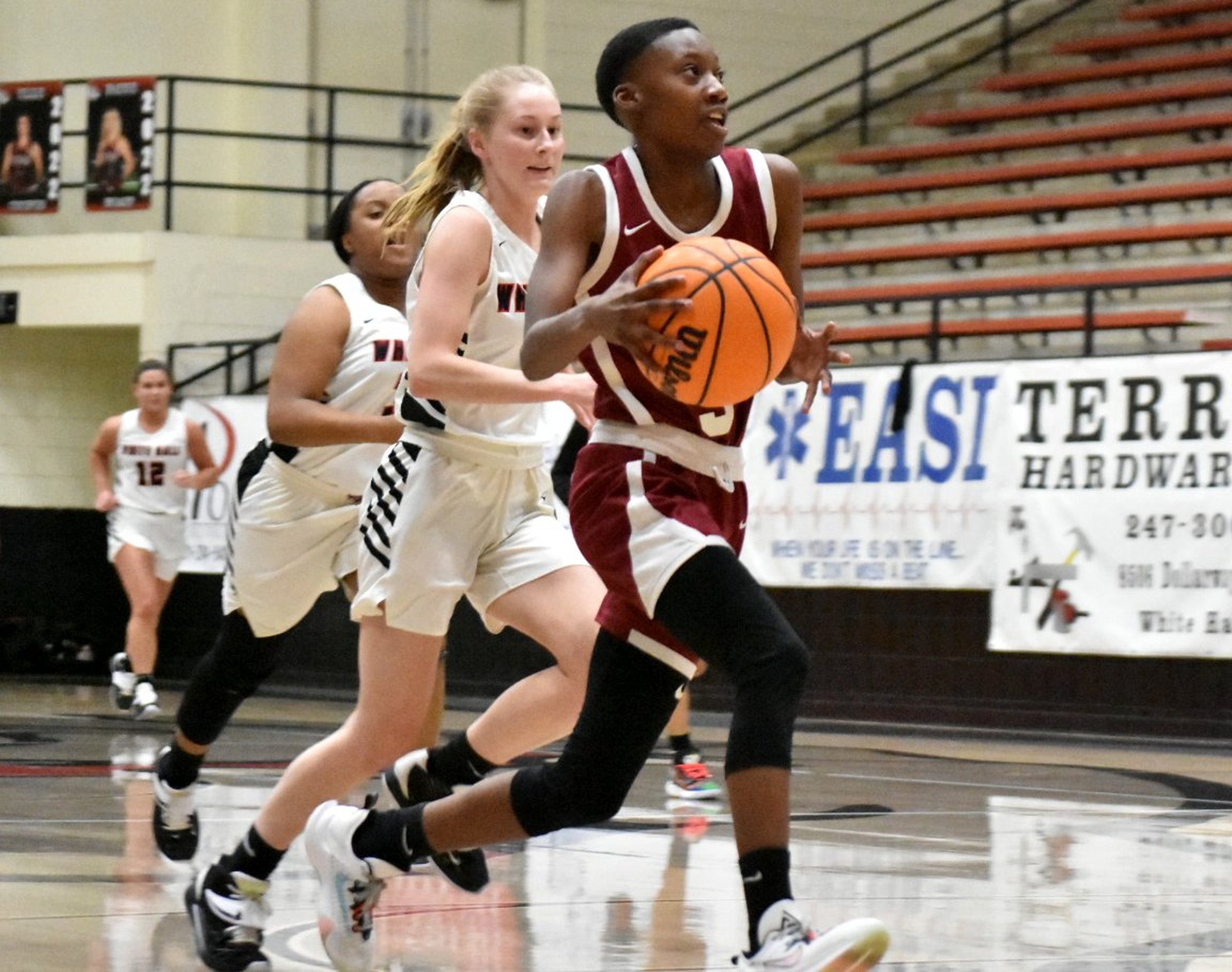 Nadiya Moten of Pine Bluff goes toward the basket as White Hall players chase her down in the first half Thursday, Jan. 20, 2022, at White Hall's Bert Honey Gymnasium. (Pine Bluff Commercial/I.C. Murrell)