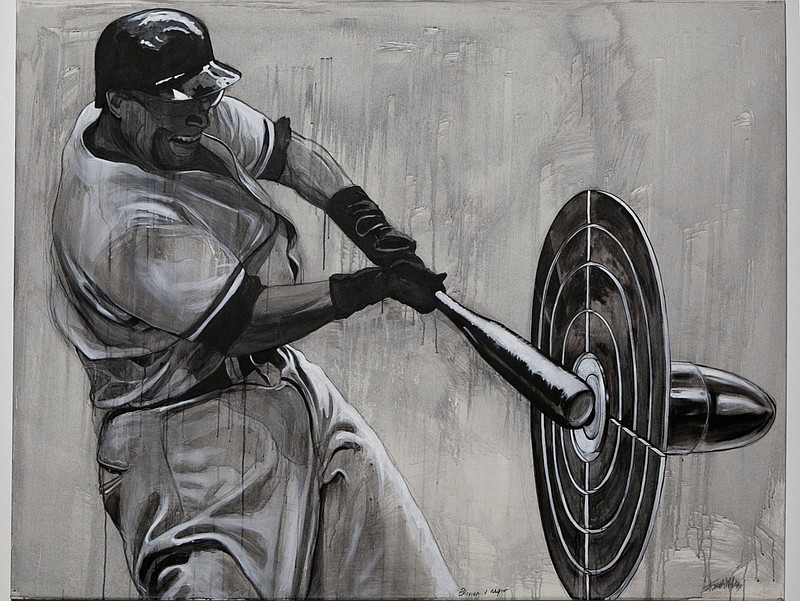 “Blanco y Negro/Black and White,” by Frank Martinez, 2008, mixed media on canvas, is part of “Arte Cubano,” a traveling exhibit of Cuban art, at the Windgate Center for Art + Design at the University of Arkansas at Little Rock.

It's a few days before the "Arte Cubano" opening at the University of Arkansas at Little Rock's Windgate Center of Art + Design, and works in various states of display can be found in the center's galleries. Many are already hanging; some lean against the walls. Sculptures are situated in their spots. A pair of workers raise "Untitled" — Carlos Jose Alfonzo's 10-foot-long, action-filled abstract acrylic and pencil on paper, which is apparently heavier than it looks — to one of the walls.

The exhibit, which opened Jan. 18 and fills the center's Brad Cushman and Manners/ Pappas galleries, is organized by Kansas City-based Exhibits USA and augmented by works from the Arkansas Museum of Fine Arts Foundation Collection, the UA Little Rock Permanent Collection, and the private collection of John Horn of Little Rock.

There are more than 25 artists included, and the works include sculpture, photography, painting, drawing and more. Among the topics it addresses are censorship, freedom of expression, art as propaganda, national identity, migration, immigration, exile, diaspora and the role of art in economic development and tourism.

Brad Cushman, gallery director for the Windgate center, says the show's appearance in Little Rock was first broached three years ago, but the pandemic delayed its arrival. 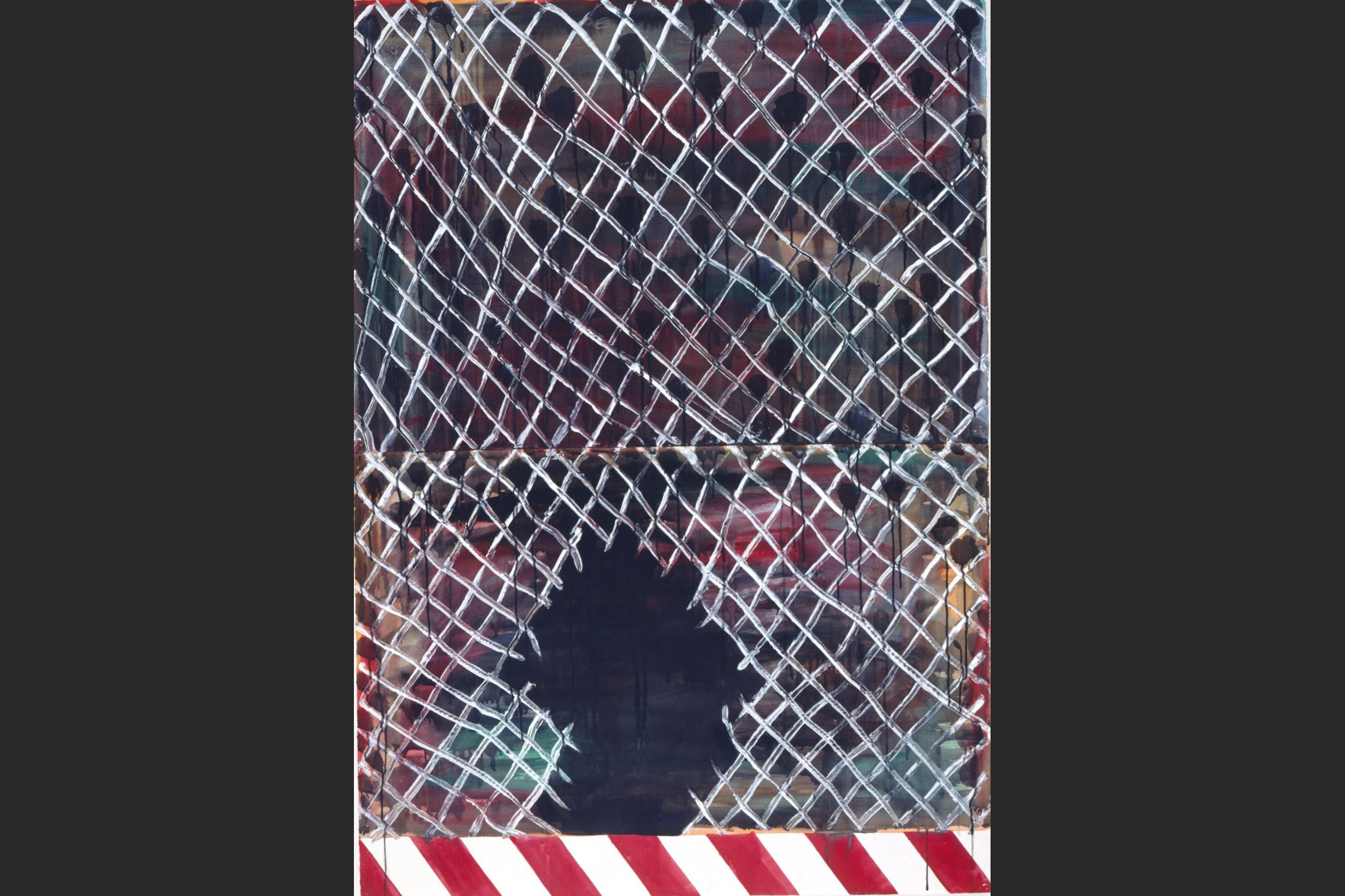 “Exit II,” by Luis Cruz Azaceta, a 1989 acrylic on paper work, is part of the Arkansas Museum of Fine Arts Foundation Collection and is on display in the new exhibit “Arte Cubano.”  "How often do we get to see contemporary art from Cuba?" asks Cushman in the upstairs gallery that bears his name. "That intrigued me. This is a way to show an international perspective of contemporary art and all the complexities of Cuba. There is this great mix of voices."

That mix is a result of Cuba's history and a multicultural heritage that includes African, European and Latin/Caribbean influences. There is also the undeniable impact of the 1959 revolution and decades of communist rule under Fidel Castro.

Among the aftereffects of the revolution was the creation of a network of art schools throughout the island, which led to the 1976 opening of the University of Arts. More than 90% of the creators included in "Arte Cubano" studied in these schools.

It doesn't take long to notice that airplanes pop up with regularity in the exhibit.

Esterio Segura's striking "Pinocchio y Napoleon Cuentan la Historia/Pinocchio and Napoleon Tell the Story" shows the wooden boy in plated cast bronze; his famed nose, which grows when he lies, has sprouted dramatically and has an airplane at the end. The length of his nose takes on a certain profundity because he's standing on a pile of history books. 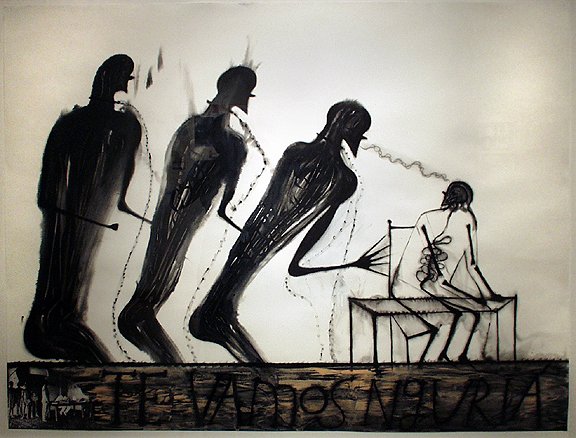 “Te Vamos Nguria” (“We Come to Talk”), by Jose Bedia, is part of the Arkansas Museum of Fine Arts Foundation Collection. The 1995 acrylic on paper work is on display in the “Arte Cubano” exhibit.  Classic American cars from the 1940s and '50s, imported in the years before the U.S. trade embargo that followed the revolution, are common in Cuba. Segura transforms an old Chrysler into an airplane in "Hibrido de Chrysler de la serie 'Todos Quieren Volar'" /"Hybrid of Chrysler from the series 'Everyone Wants to Fly.'" The image, from 2007, turns a mid-century car into a conveyance that can fly above Cuban roads and find a life elsewhere.

An airplane also figures in "Pasa Tiempo/Pastime," a photographic triptych by Diana Fonseca Quinones. In the photos, taken from a video, the artist uses thread to stitch an airplane into the palm of her hand. Sounds painful, but the stitches are apparently superficial. The deeply personal aspect of making art with her body adds to the weight of the work.

It's hard not to conjure ideas of leaving in "Escapar 3/Escape 3," a black-and-white photograph by Alain Pino that shows a swimmer in midstroke. Thoughts of countless hopeful Cubans crossing the Gulf of Mexico to Florida in flimsy vessels come to mind. There is also, though, the idea of escape offered through physical exercise. Either way, the tightly cropped photo, which shows the subject tilting his head above the water to take a breath, draws the viewer into the story.

"Exit II," from the Arkansas Arts Center Foundation Collection, is an acrylic on paper work by Luis Cruz Azaceta that shows a fence with a hole cut into it, revealing a darkness that's almost like the opening of a cave. It makes one want to crawl through it to see what's on the other side. 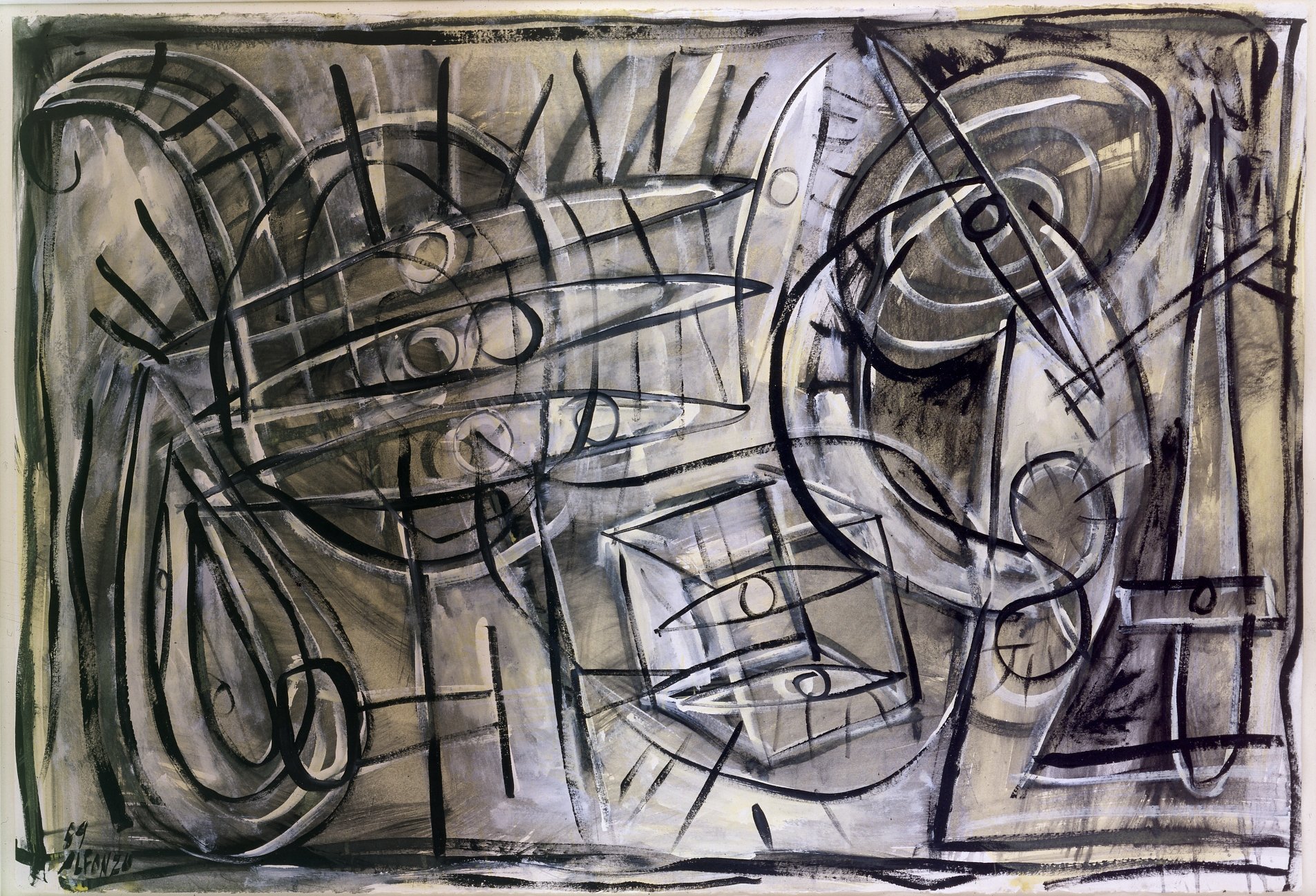 “Untitled,” 1989, by Carlos Jose Alfonzo, is shown in the exhibit “Arte Cubano.” The work is also part of the Arkansas Museum of Fine Arts Foundation Collection.  Cuba's love of baseball is reflected in Frank Martinez' mixed media on canvas "Blanco y Negro/Black and White," which shows a Black batter swinging at the white bull's-eye of a target and a large bullet being blasted from the other side — a "cannon shot" with commentary on race and sport. It's a large piece, more than four feet tall and seven feet long, and surges with power and motion.

Race and slavery are part of Martinez' "Sin Titulo/Untitled," which shows airline passengers (another plane reference!), being served food in an image that looks like it could have been taken from a magazine ad in the '60s. Superimposed like tapestry across the tourists on the plane, however, are images of captives on slave ships, traveling across the Middle Passage.

We mentioned Carlos Jose Alfonzo's "Untitled" earlier. It's one of two pieces in the show by the painter, who died in 1991. Both are works on paper with energetic gestural marks that reflect an abstract expressionist spontaneity and are on loan from the Arkansas Museum of Fine Arts.

And speaking of energetic marks, "Extrana Declaracion de Amor: Para un Angel Guajiro/Strange Declaration of Love: For a Country Angel," a mixed media on paper by Pedro Pablo Oliva, is a large doodle of endearing, oddball, dreamlike figures. It's a treat to get close and see all of the stories Oliva is telling, not just with his figures but in the patterns and colors he uses. 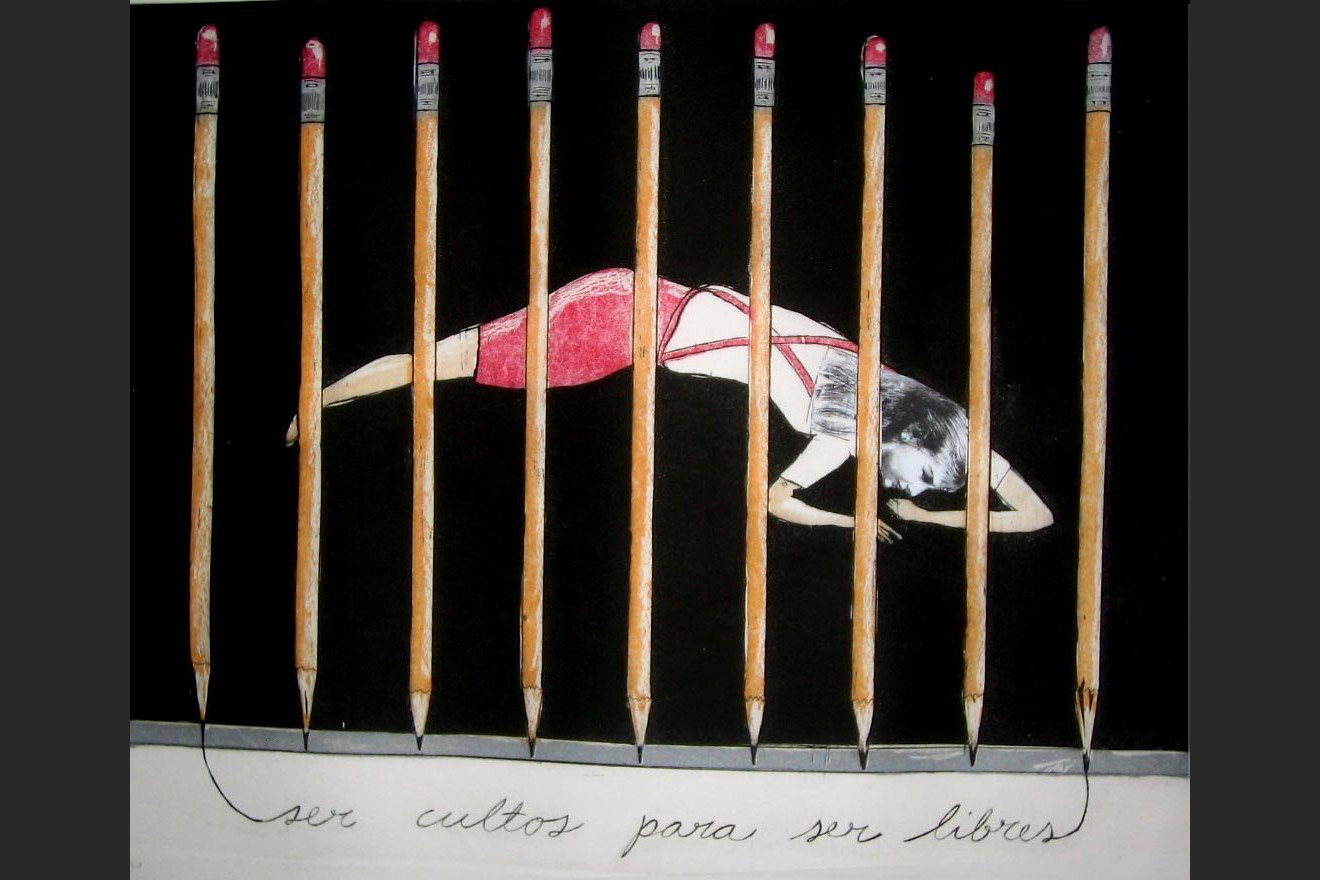 “Ser Cultos para ser Libres/Be Cultured to be Free,” 2005, by Sandra Ramos Lorenzo, is part of the “Arte Cubano” exhibit.  Sandra Ramos Lorenzo has three pieces in the exhibit, including "Los Poemas del Espejo/The Mirror Poems," a clever combination of her own images and the poems of Toi Derricotte displayed in a box with mirrors that is trippy and beautiful.

As with all of the works it's accompanied by a detailed, informative panel in English and Spanish, a thoughtful touch for viewers.

We've just scratched the surface here, but it bears noting that though the exhibit wasn't completely finished when we saw it, its size and scope are not overwhelming ... just deep and rich, filled with intriguing things to look at and think about and a welcome gateway to Cuban contemporary art.