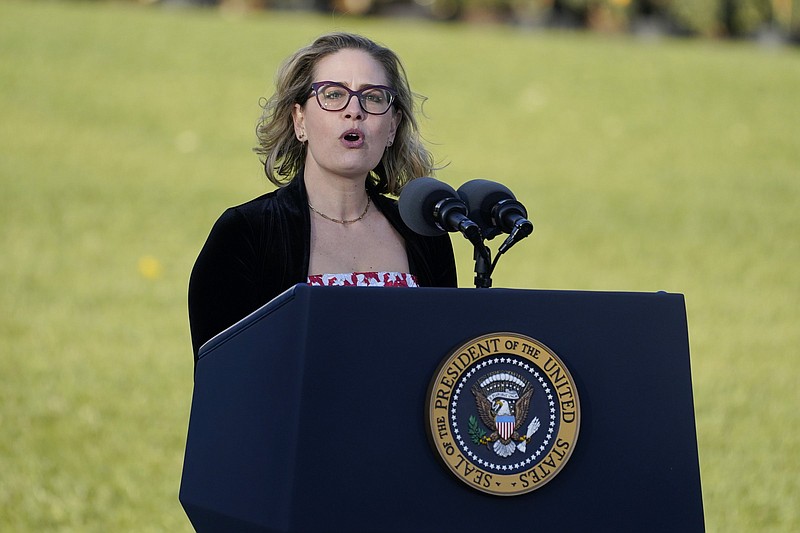 PHOENIX -- A rift between Sen. Kyrsten Sinema and fellow Democrats back home in Arizona deepened Saturday as the state party formally rebuked Sinema for refusing to change the Senate's filibuster rules to pass voting-rights legislation.

The censure from the party's executive board was symbolic, but it crystallized a growing sense of anger and frustration among liberal activists and Democratic voters aimed at Sinema.

They accuse Sinema, a first-term senator, of impeding key parts of President Joe Biden's agenda and have vowed to withhold donations and search for a liberal primary challenger when she is up for reelection in two years. Activists have staged protests outside her office and begun a hunger strike to urge Sinema to support changing the Senate rules to allow voting-rights legislation to pass with a simple majority of the 100 senators rather than the 60 votes required under Senate rules.

But she has steadfastly refused and reiterated her opposition to scrapping the filibuster in a Jan. 13 speech on the Senate floor, arguing that the parliamentary tactic "has been used repeatedly to protect against wild swings in federal policy."

Sinema said she supported the Democratic voting-rights legislation but that she believed doing away with the filibuster would worsen America's political divisions.

The opposition from Sinema and Sen. Joe Manchin of West Virginia to changing the 60-vote threshold required in the Senate to move major legislation forward has all but doomed the Democrats' hopes of passing federal voting legislation.

The Arizona Democratic chair, Raquel Teran, said Saturday that the party's executive board had voted for the censure because of Sinema's "failure to do whatever it takes to ensure the health of democracy."

Teran said voting rights were already being threatened in Arizona and cited Republican proposals to limit mail-in voting and a widely criticized Republican-run audit of the 2020 election results in Maricopa County, home to Phoenix and 60% of the state's registered voters.

Democrats nationally cite a barrage of Republican legislation aimed at the rules for voting, as well as counting and certifying votes as a fundamental threat to American democracy.

Hannah Hurley, a spokesperson for Sinema, said in a statement that Sinema had been consistent about her opposition to changing the filibuster.

Sinema, a onetime Green Party-affiliated activist, has won praise from Republicans and infuriated Democrats by bucking her own party as a senator who represents a closely divided swing state.

Barrett Marson, a Republican political strategist, said that those censures of prominent Arizona Republicans by their own party had little effect and that he doubted the censure alone would hurt Sinema's political fortunes.

But, he said Sinema's problems go far deeper than the censure vote.

"The censure in and of itself means absolutely nothing," Marson said. "It's a feckless move. However, Sen. Sinema certainly has a broader problem than just a censure from the party faithful."

Those problems include fierce discontent among Democratic voters, who have signaled that they might prefer a liberal alternative to Sinema, such as Rep. Ruben Gallego, a Phoenix congressman whom some activists are hoping to draft into a primary.

Fundraising group Emily's List, a major supporter of Sinema in her 2018 run for Senate, has also threatened to pull its support, and she has recorded flagging numbers among her Democratic base in recent polls.